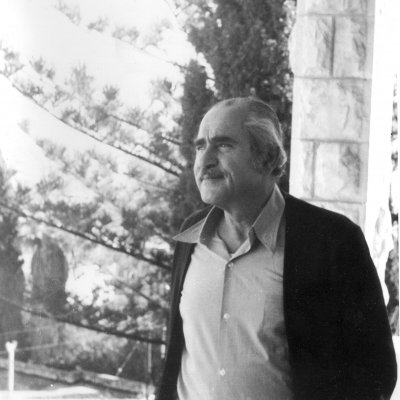 Emile Touma was born in Haifa to Jibra’il Hanna Touma and Mary Habib Khuri. He and his wife, Haya, had a son, Mikha’il.

He attended the Orthodox School in Haifa for his elementary school education; he then moved to Jerusalem to complete his high school education at the Zion College (Bishop Gobat’s School). There he was first introduced to socialist ideas through contact with some of his schoolteachers. One of his teachers, the well-known Lebanese man of letters Ra’if Khuri, used to gather his students together to meet his Palestinian communist friend, Abdallah al-Bandak, who would often come to the school.

In 1937, Touma participated in founding the Union of Arab Students in Palestine, which supported nationalist issues; students joined nationalist demonstrations, organized campaigns to teach illiterate children, and visited villages during the summer holidays to acquire a better understanding of the lives of peasants. Shortly after its foundation, the union adopted the name League of Arab Students.

In late 1937, Touma travelled to Cambridge University to study law but returned to Palestine after the outbreak of World War II and then joined the clandestine Palestine Communist Party. In September 1941, he participated in founding the League of Arab Intellectuals in Palestine and was elected a member of its central committee.

In 1942, he and his friends Tawfiq Tubi and Bulos Farah founded the Ray of Hope Club in Haifa to act as an intermediary between the League and the Arab workers in the petrol refineries in the Haifa suburbs. However, the club decided in November 1942 to dissolve itself and to create the Federation of Arab Trade Unions and Labor Societies, which, by the beginning of 1944, was one of the mainstays of the National Liberation League in Palestine. The latter included in its ranks most Arab communists who had left the existing Palestine Communist Party, most of whose members were immigrant Jews. Touma was elected secretary of the league.

On 14 May 1944, the Federation of Arab Trade Unions and Labor Societies in Haifa issued a weekly publication called al-Ittihad, which was owned and edited by Touma. In August 1945, the Arab Workers’ Congress was established, and it eventually represented the Communist wing inside the trade union movement in Palestine.

In 1947, Touma represented the National Liberation League in Palestine at the Conference of the Communist Parties of the British Empire held in London. He was among the few members of the leadership of the National Liberation League in Palestine who opposed the UN Partition Resolution adopted on 29 November 1947, a resolution supported by the Soviet bloc led by Moscow.

After the Nakba, Touma was forced to take refuge in Lebanon where he was imprisoned for a few months in a detention camp in Baalbek because of his communist activities. In April 1949, he decided to return to Haifa, his hometown, which had fallen under Zionist control. He intended to resume his political and social activity in Israel within the ranks of the Israeli Communist Party, which by then included members of the National Liberation League who had returned to the party in October 1948. He also resumed work on the editorial board of al-Ittihad and as editor of the magazine al-Jadid.

The leaders of the Israeli Communist Party asked Touma to prepare a self-critique to explain his earlier opposition to the UN Partition Resolution, which he did. He was not elected a member of the party’s central committee or its political bureau until 1965, when Arab members and some of their Jewish comrades left the party and formed the New Communist List (Rakah) in Israel. (The party readopted the name Israeli Communist Party in the mid-eighties.)

In mid-1965, Touma travelled to Moscow at the invitation of the Institute for Oriental Studies of the Academy of Sciences, in order to prepare a study on the modern history of the Arab peoples and the problems of Arab unity. In March 1968, he was awarded a doctorate based on a thesis he submitted on this subject. Before travelling to Moscow, he had published two books of history, the first in 1960, titled The Arabs and Historical Evolution in the Middle East, and the second in 1962, titled The July 23 Revolution in Its First Decade.

In the mid-seventies Touma played a prominent role in founding the Democratic Front for Peace and Equality and was elected its central coordinator. He also took part in founding the National Committee for the Defense of Arab Lands in Israel, and in the second half of the seventies he edited the al-Ittihad newspaper. Following his resignation from that editorship in May 1980, he was appointed editor of the magazine al-Jadid, which he continued to edit it until his death.

Touma died in a Budapest hospital. His body was carried to Haifa where tens of thousands turned out for his funeral, and he was buried in the Orthodox cemetery. At his request, the following words were inscribed on his tombstone: “I have loved my people with a love that dominated all my sentiments and believed deeply and unreservedly in the fraternity of all peoples.”

Emile Touma was one of the most prominent Palestinian Marxist leaders who contributed to the preservation of the Arab identity of the Palestinians in Israel and to strengthening their ties to the Arab Palestinian people. In addition, he was a distinguished historian and eminent literary critic. He left tens of books and hundreds of studies and articles in the fields of history, intellectual subjects, and literary criticism. Through his work in al-Ittihad newspaper, he was a prominent intellectual facilitator who mentored young Palestinian Arab writers and men of letters in Israel.

His works were translated into Russian, German, and Hebrew. The Emile Touma Institute for Political and Social Research in Haifa issued his complete works in five volumes in 1995. The Haifa Municipality named a city street in Wadi Nisnas, in the Arab quarter of the city, after him.

[The Arabs and Historical Evolution in the Middle East]

[The Roots of the Palestine Question]

[Diary of a People: Al-Ittihad after Thirty Years]

[A History of the Modern Journey of the Arab Peoples]

[The Path of Struggle of the Arab Masses in Israel]

[Palestine in the Ottoman Period]

[The Arab Nationalist Movement and the Question of Palestine]

[An Anthology of Literary Criticism]

Toward an Autonomous Palestinian Field

A Dynamic Movement Ripped Apart by the Nakba