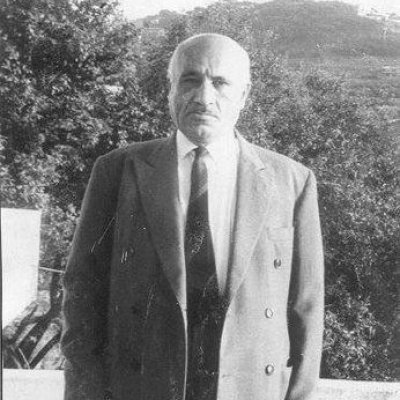 Taqi al-Din al-Nabhani was born in the village of Ijzim in the district of Haifa, in Palestine. His father was al-Shaykh Ibrahim. His maternal grandfather was the distinguished scholar Shaykh Yusuf al-Nabhani. He and his wife, Lami‘a Mayyasi, had three sons, Ibrahim, Taj al-Din, and Usama, and one daughter, Hutaf.

He received his initial religious education from his father and grandfather. He then studied at the Ijzim Elementary School and later at the Acre Boys Secondary School, which was located inside the Jazzar Mosque. In 1928 he went to Cairo to study at the al-Azhar University, at the expense of his grandfather. He completed his studies there and obtained the ‘Alimiyya diploma and a certificate in religious magistracy from the Higher Institute for Religious Magistracy attached to al-Azhar.  He then enrolled at Dar al-‘Ulum, where he obtained a diploma in Arabic language and literature in 1932.

Returning to Palestine, he began his working life as a teacher of religious subjects in the secondary schools of Haifa and Hebron until the year 1938 when he moved to become a religious judge. He rose in rank from being a scribe in the Baysan and Tiberias religious courts to head scribe (Bash Katib), then deputy judge (Mushawir) in the Haifa religious Court, and finally, in 1945, to being appointed judge of the Ramla religious court.

Nabhani had entered public life beginning in 1941 when he became vice-president of the Keeping Faith (I‘tisam) Society founded by Shaykh Muhammad Nimr al-Khatib in Haifa. That society concerned itself with cultural, social, and boy scout issues and opposed negative social phenomena like prostitution. In the mid-forties, he had some contacts with the leaders of the Society of the Muslim Brothers and became familiar with their ideas but refused to join the society, although his intellectual debt to its theoretician, Sayyid Qutb, is occasionally detectable.

In 1947, Nabhani joined the Arab Nationalist Bloc, which held its first meeting in Haifa in June of that year; the group was to remain local in its impact and was not destined to last. Meanwhile, and as a reaction to what had happened to his homeland and people at the hands of the Zionists, he sought to reconcile the Islamic and nationalist positions. This was clear in his earliest books, for instance, Saving Palestine.

After the Nakba in 1948, Nabhani took refuge in Syria but returned that same year to Jerusalem where he was appointed a judge of its religious court under Jordanian rule and then a member of the religious court of appeal. He also lectured at the Islamic Scientific College in Amman.

In 1951, Nabhani resigned from his judicial functions and ran for elections to the Jordanian parliament, but his bid was unsuccessful.

In 1952, Nabhani founded the Tahrir (Liberation) Party and devoted himself to running it. The party, which concentrated on the role of “ideas” in changing society, called for a resumption of Islamic life and the creation of an Islamic state “which carries out the ordinances of Islam and its message to the world.” This was to be carried out through a total and radical change, which saw no hope for reform in any Islamic regime anywhere in the Islamic world. Nabhani drafted a constitution for the hoped-for Islamic state, included in his book called Government in Islam.

In 1953, the Jordanian Ministry of the Interior refused to allow the party to operate in the open and closed his Jerusalem headquarters. The Tahrir resorted to clandestine activity and established secret cells in Jerusalem, Hebron, and Nablus and in Palestinian refugee camps around Jericho. They also spread among students, in Jenin and Tulkarm in particular.

In 1954, Nabhani was forced to leave Amman for Damascus, but the party failed to obtain official permission to pursue its political activities in Syria, so again it resorted to clandestine activity. Nabhani was then forced to move to Beirut where he spent most of his time. In 1959, the party succeeded in obtaining permission to pursue political activity in Lebanon, enabling it to spread to Tripoli in particular and in a less active form in Beirut and Sidon, especially in the Palestinian refugee camps of these two cities.

The activity of the Tahrir Party spread from Lebanon to Iraq and Egypt. In the eighties, it succeeded in establishing branches in North Africa, especially in Tunis and Libya. In Turkey, its branch became active in the seventies. The party then set up branches in Britain and in a number of European countries and developed a strong base in certain independent central Asian states that were once part of the Soviet Union.

Taqi al-Din al-Nabhani was a very active jurist, somewhat short-tempered, skilled in argument, had a strong personality, combined religion with politics, aspired to restore the Islamic Caliphate, and blamed most Muslim religious scholars for keeping aloof from the field of Islamic political activism. He considered the rise of an Islamic state to be the prelude to the struggle against Israeli occupation of the land of Palestine. He wrote many books.

Shaykh Nabhani died in Beirut and was buried in the Hursh cemetery in Beirut.

[The Social Order in Islam]

[The Economic Order in Islam]