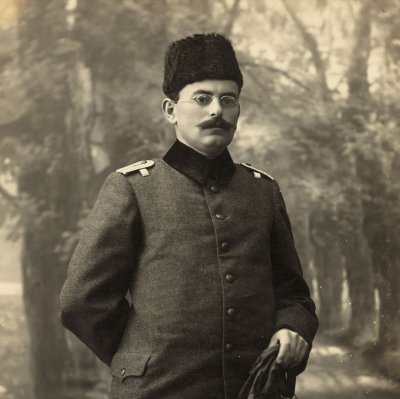 Tawfiq Canaan, the second son born to Bishara and Katrina, was born in the town of Beit Jala on 24 September 1882. His father was the first Arab pastor in the Arab Lutheran Church. His wife, Margot Eilender, was of German origin. They had four children: Yasma, Theo, Nada, and Laila.

He completed his elementary school education in Beit Jala and then moved to the Schneller German School in Jerusalem where he completed high school. In 1899 he travelled to Beirut to study medicine at the Syrian Protestant College, now the American University of Beirut. When his father died soon after his arrival in Beirut, he was forced to work while going to school. Nevertheless, he graduated with honors as a medical doctor in 1905 and was the speaker of his class at the graduation ceremony, a speech reproduced in the journal al-Muqtataf. He then returned to Palestine.

Canaan worked in several Jerusalem hospitals: first at the German hospital, then at the British hospital, and then at the Shaare Zedec German Jewish hospital. In 1910 he became the doctor in charge of a clinic attached to the Jerusalem Municipality. Between 1906 and 1910, he conducted tests in the field of the science of germs and microscopic examinations, the results of which were published in 1911 in his first article on basic medicine in al-Kulliyya, the journal of the Syrian Protestant College. This was to be his field of specialization. Between 1912 and mid-1914 he continued his research into diseases of tropical regions and germs and spent some time in Hamburg, Germany, and in Berlin in 1922, returning to Jerusalem and resuming his research and his work. In 1913, he was appointed director of the Anti-Malarial section in Jerusalem in the Muehlen General Health Organization, an international center for medical research and microscopic testing designed to improve the health conditions in Palestine. He also opened his private clinic in his house, which he had built in the Musrara quarter in Jerusalem. It was the first and only Arab clinic in that quarter at that time.

When the war ended, Canaan was put in charge of the Leper Hospital in the Talbiyya quarter, founded by Jerusalem’s Protestant German Community in 1885. He continued to work there until the end of the Mandate and took part in the medical research and microscopic tests; in many instances he successfully cured patients with leprosy. In 1924 he was appointed chief of internal medicine in the German Hospital in Jerusalem, remaining in that post until 1940.

In addition to his ceaseless activity in the medical field, Canaan became active in the study of the popular heritage of Palestine. In 1927 he became president of the Palestine Oriental Society and edited its journal. He was also a member of the American Schools of Oriental Research and published many of his articles in its journal. In addition he was the president of the Young Men's Christian Association (YMCA) in Jerusalem for three terms. Following his retirement, he was elected honorary president for life.

Tawfiq Canaan was well known to the British authorities because of his political activity; he had long expressed his opposition to British and Zionist policy and to opening the door of emigration to Jews. This led the British to arrest him on 3 September 1939, the same day that Britain and France declared war on Germany. He was imprisoned in Acre jail for nine weeks. However, this did not prevent him from continuing to oppose British policy and the Zionist movement in his lectures and writings.

In 1944, Canaan cofounded the Arab Medical Association in Palestine and was elected its president. For seven years, he was a member of the editorial board of the association’s journal, which was published in both Arabic and English. The association played a prominent role in providing medical assistance to the Palestinian freedom fighters.

In early May 1948, Canaan’s house in Jerusalem received direct hits from mortar rounds fired from the city’s western Jewish quarters, so the family sought refuge in the Greek Orthodox Monastery in the eastern part of the city. The Patriarch provided a room in the monastery where the family spent two and a half years. Across the city walls, Canaan would observe Jewish militias plundering the valuable contents of his house and his large library. Three manuscripts ready for publication were thus lost before the entire house was set on fire. Despite these very painful events, Canaan continued to treat patients and to act as president of the Arab Medical Association in Palestine. In 1949, he was appointed head of the medical department of the Lutheran World Federation in Jordan. Thanks to his efforts, a number of clinics were founded by the Federation in Jerusalem, Beit Jala, and Hebron and in the villages of Taybeh and Azariyya. In 1950, and through his efforts, the Augusta Victoria Hospital was established on Jabal al-Tur, in collaboration with United Nations Relief and Works Agency and the Lutheran Federation. He was appointed its medical director until his retirement in 1955.

In the years remaining to him he continued to publish his research.

Canaan published more than sixty scientific articles in European medical journals, in both English and German. His publications were not restricted to the medical sciences; he published some forty-five articles on folklore, which had to do with supernatural beliefs and folk medicine, especially among peasants. Some thirty of these were published in the years between 1920 and 1938 in the Journal of the Palestine Oriental Society. He recognized from an early period the importance of this tradition in rooting Palestinian national identity and called for a total survey of it before it disappeared. Since 1905, he had collected amulets that were linked to popular beliefs, record them, and write about them. By 1947 he had collected some 1,400 pieces, which his family donated to Birzeit University after he had succeeded in saving them from what had happened to his house.

He also delivered many lectures and wrote about the cause of Arab Palestine especially in the thirties when the dangers of Jewish immigration became evident. He called for an immediate and final end to that immigration, for a guarantee of a minimum amount of land for Arab farmers and a ban on dispossession. He was thus a cultural ambassador for his country and one who introduced the western reader to Palestinian habits and traditions and to the cause of the Arabs of Palestine.

Canaan was a pioneer among Palestinian Arabs in the fields of the history, folklore, and ethnography of the Palestinians as a nation and not as a collection of diverse religious communities who lived in Palestine. He was the first to establish for Palestine as a whole its cultural identity. Thus, in his article of 1931 entitled “Light and Darkness in Palestine Folklore” (which he wrote in English), he quoted the Bible as well as the Qur’an, classical Arabic literature, and Arabic phrases and expressions. He thus succeeded in demonstrating a cultural continuity for Palestinian Arabs lasting from the most ancient times to the present. His writings remain to the present day of basic importance for any scholar of ethnography in the Near East region.

Tawfiq Canaan was much honored during his lifetime both in his country and beyond. He was awarded eight medals among which were the Order of the Red Crescent and the Iron Cross, both during World War I and the Holy Sepulchre Cross with Red Ribbon awarded by the Greek Orthodox Patriarch in 1951. In the same year he was awarded the Federal Merit Cross of the Federal Republic of Germany.

Until the very end, Canaan carried on with his scientific research despite his worsening health and published several articles the year before he died. Indeed, his very last article, “Crime in the Traditions and Habits of the Arabs of Jordan,” was published in German after his death.

Tawfiq Canaan was a brilliant physician, an encyclopedic scholar, and a pioneering student of popular folklore in Palestine. He was the most prominent Palestinian Arab to write in foreign languages in the period before and during the British Mandate.

[Superstition and Popular Medicine in the Land of the Bible]

[Belief in Demons in the Land of the Bible]

The Palestine Arab Cause. Jerusalem: The Modern Press, 1963.

Conflict in the Land of Peace. Jerusalem: Syrian Orphanage Press, 1963.

“The Oriental Boil: An Epidemiological Study in Palestine.” Transactions of the Royal Society of Tropical Medicine and Hygiene, 23 (1929): 89–94.

“Topographical Studies in Leishmaniasis in Palestine.” Journal of the Palestinian Arab Medical Association 1 (1945): 4–12.

Hübner, Ulrich and Brigit Mershen. “Tawfiq Canaan and His Contribution to the Ethnography of Palestine.” In U. Hübner (ed.), Palaestina Exploranda (ADPV 34), Wiesbaden 2006, 251–64.