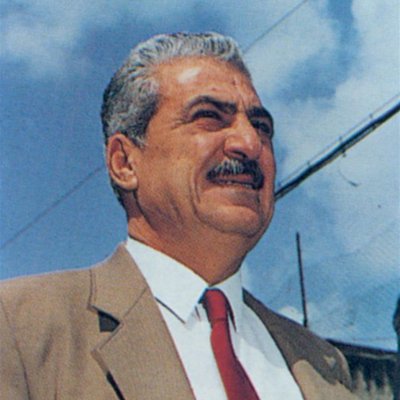 Tawfiq Zayyad was born in Nazareth to Amin Zayyad and Nazha al-Khawaja. He had four brothers (Sabih, Misbah, Abd al-Fattah, and Ahmad) and four sisters (In‘am, Na‘ima, Ni‘ma, and Rahija). He and his wife, Na’ila Yusuf Sabbagh, had four children: Wahiba, Amin, Ubur, and Faris.

Zayyad completed his education in the Nazareth government schools, obtaining his secondary school certificate in 1946. While studying, he used to help out his father in his grocery shop.

His interest in politics began while he was still at secondary school, and his political and progressive views were influenced by the ideas of three of his teachers: Rushdi Shahin, Jamal Sakran, and Fu’ad Khuri. These teachers exposed their students to what was being published in al-Ittihad newspaper and al-Mihmaz magazine. In 1946, Zayyad led a student demonstration protesting pro-Zionist British policy.

Before the Nakba of 1948, Zayyad joined the Nazareth branch of the National Liberation League in Palestine, which was established in 1944 and included Arab communists who had split from their Jewish comrades in the Palestine Communist Party. At that period also, his love of literature and general culture became apparent, and he began publishing his earliest poems in the late forties.

Zayyad, along with other comrades from the League who were able to remain in Arab areas occupied by Israel, joined the Israel Communist Party established in October 1948.

Throughout the fifties and until the early sixties, Zayyad was active in trade union activities in Nazareth, within the framework of the Arab Workers Congress until that organization dissolved itself in July 1953. Later, he worked within the Communist bloc inside the Histadrut organization, writing numerous articles in the Haifa al-Ittihad newspaper about the condition of the workers, especially the Arabs, in Israel.

In March 1954, a demonstration began at the Arraba elementary school and ended with a mass meeting to protest against the capitation tax, imposed on Arab citizens who were not subject to obligatory military service. After the demonstration, the Israeli police arrested Zayyad and sent him to the Tiberias prison, where he was beaten and insulted by the interrogators. He was then led before the Acre military tribunal, which sentenced him to forty days in prison, charged with “disturbing the peace” and “assaulting police officers.”

At the beginning of July 1954, Zayyad was elected during the elections for the Council of the Nazareth Municipality in the second spot on the Communist and non-Partisan List, which won six out of fifteen seats. At the very first session of the Municipal Council he suggested that the public be allowed to attend its sessions, a proposal rejected by most of the other councilors.

In 1958, and in the wake of a demonstration planned in secret by the Communist Party in response to the refusal of the Israeli authorities to grant the party permission to organize a 1 May demonstration in Nazareth and Umm al-Fahm, Zayyad was again arrested and spent six months between the two prisons of al-Jalama and al-Damun. During this period his poetry was prolific.

Between 1962 and 1964, Zayyad continued his academic study at the Institute of Social Studies in Moscow, where he studied philosophy and political economy. Upon his return from the Soviet Union, Zayyad was chosen in 1964 as secretary of the Nazareth branch of the Communist party.

In 1965, the Israeli Communist Party split, and Zayyad was one of the Arab members who established with some Jewish comrades the New Communist List, known as Rakah. This then readopted the name “Israel Communist Party” in the mid-eighties.

In 1966, Zayyad became the editor of the literary journal al-Jadid, published by the Communist Party. This gave him more time to devote himself to his literary activities.

In the early seventies, the party leadership sent him to Prague to represent it on the editorial board of the journal called Problems of Peace and Socialism, issued by the communist parties, and to supervise the students sent by the party to the universities of the socialist states.

In late 1973, Zayyad was elected as deputy to the Knesset in its eighth session, representing Rakah. When he published his poem, entitled “The Great Crossing,” on the first anniversary of the October 1973 war, deputies from the Israeli right called for debarring him from entering the Knesset, depriving him of his parliamentary immunity, and putting him on trial.

The Nazareth Democratic List, headed by Zayyad, won a great victory in elections to the Municipality of Nazareth held on 9 December 1975, winning 67 percent of the vote and eleven out of seventeen seats on the council. Zayyad was elected Mayor and set out to turn Nazareth into a political and cultural hub. He opened the sessions of the Municipal Council to the public and strove to make Nazareth receive the same subsidy as other towns and cities that had an equivalent population. He further took the initiative to hold volunteer workers’ camps, held annually in Nazareth from 1976 until 1992.

Following the great success achieved by the Nazareth Democratic List, Zayyad took an active part in establishing the Democratic Front for Peace and Equality.

From his position in the Knesset and as mayor of Nazareth, Zayyad played a prominent role in the success of the strike known as Land Day on 30 March 1976. He decisively confronted some heads of Arab local councils who attempted, under pressure from the Israeli authorities, to subvert the strike. As a result of that stand, he was physically assaulted and an attempt was made to burn down his house.

Beginning in 1975, Zayyad devoted most of his time to his work in heading the Nazareth municipality, a post he occupied until his death. A few years before he died, he prepared an ambitious program to develop the city of Nazareth, which he called “The Nazareth Project 2000.”

In 1990, Zayyad resigned his seat in the Israeli Knesset but reversed his decision under popular and party pressure in order to head the list of the Democratic Front for Peace and Equality in the elections held in June 1992.

As mayor and as Knesset member, Zayyad was the target of several assassination attempts, all of which failed.

Tawfiq Zayyad died on 5 July 1994, in a horrific car accident on his way back from Jericho, where he had been among those welcoming Palestinian president Yasir Arafat.

Zayyad was one of the most courageous leaders of the Arabs of Palestine and one of the closest to people’s hearts. He was known for his mild manners, his honesty, and his humble demeanor. In addition, he is regarded as a prominent poet of Palestinian resistance, whose poems reflected his party attachments and his class and internationalist views, focusing on his people’s national issues. His poems are distinguished by their depth and simplicity; they are easy to memorize, which made it possible to set many of them to music and songs that became part of the popular musical heritage of resistance.

In 1990, Zayyad was awarded the Jerusalem Medal for Culture, Arts and Literature from the PLO. His wife, along with some friends and comrades, established the Tawfiq Zayyad Institute for National Culture and Creativity, which focuses on maintaining his literary heritage. In 1995, the Ministry of Culture of the Palestinian Authority established the Tawfiq Zayyad Literary Prize in his honor.

[I Shake Your Hands]

[Bury Your Dead and Rise]

[Songs of the Revolution and of Rage]

[Jubilations of Death and Martyrdom]

[The Way of the World: Folkloric Tales]

[I Belong to This City]

A Turning Point in the Defense of Palestinian Lands in Israel