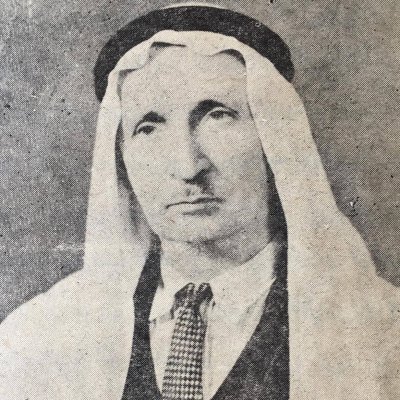 Ihsan al-Nimr was born in Nablus. His father was Najib Agha and his mother was Khadija bint Abd al-Qader. He had a brother, Ahmed, and two sisters, Shamsa and Nabiha. He had a daughter called Khadija.

Nimr grew up in a conservative family and started his education in a traditional elementary school (kuttab). He then went to al-Maktab al-Rushdi school in Nablus and then to the Najah National School. He travelled to Lebanon for his high school education, enrolling at the National College in Choueifat, where he obtained his secondary school certificate in 1929 and the qualifications needed to enter the science faculty at the American University in Beirut (AUB) without taking the entrance examination. But his family’s financial circumstances made it impossible for him to enrol at AUB, so he decided to return to Nablus and educate himself on his own, studying the classical works of Arab and Islamic history as well as the Qur'an.

Nimr’s return to Palestine coincided with the outbreak of the al-Buraq Disturbances in August 1929. He began to spread awareness among young people in Nablus of the danger of Zionist immigration and the role of the British (the “cause of misfortune”) as the sponsors and protectors of Zionism in Palestine. On the internal Palestinian scene, Nimr was one of the first people to argue against joining either of the two big political groupings, the Majlisi bloc or the opposition bloc.

Nimr helped organize the conference held in Nablus in early August 1931 to protest British acquiescence to weapon acquisition by the Zionists. In 1932 he worked with the executive committee of the Youth Conference to organize border guards and coast guards to combat illegal Jewish immigration.

Nimr participated in various nationalist activities in the 1930s—founding the Shoe Workers Association in Nablus in the early part of the decade, setting up the Islamic Revival School in 1932 to educate children who were not able to enrol in government schools, and establishing two societies in 1934: the Hadaya Society and the Hadaya Sports Society. The stated aim of these societies was to “improve the conditions of Muslims” by reforming morals. the Hadaya Society's first decision was to campaign against alcohol and smoking. It responded positively to several appeals to collect donations, including one from the Kingdom of Saudi Arabia to collect donations for the poor of Madina (before Saudi Arabia had oil revenue), for the families of people sentenced to life imprisonment by the British authorities after the al-Buraq Disturbances in 1929, and to rebuild the Nasr mosque in Nablus, which had been destroyed by the earthquake that hit Palestine in 1927. The society (which tried to open branches in other Palestinian towns and villages) ceased its activities when World War II broke out.

When World War II ended, Nimr founded the Palestinian Arab Progress Party, whose main objectives were to protect the land and property of Palestine's Arabs and to elevate principles and morals above personal and family considerations. But the party suspended its activities after the Partition Resolution in November 1947.

Throughout these years Nimr wrote articles on politics, history, and other topics that were published in several Palestinian and Arab newspapers and magazines, including al-Karmel, al-Jami’a al-islamiyya, al-Difaa‘, al-Azhar, al-Tamaddun al-islami, al-Hayat, and al-Sirat al-mustaqim.

After the Nakba in 1948, Nimr stayed in Nablus, which came under Jordanian rule; he gave up politics and devoted his time to research and writing. He did not leave the city when the Israelis occupied it in June 1967; he continued his  research, focusing on the records of the shari‘a courts.

Nimr wrote more than thirty books, the most famous and most important of which is the four-volume A History of Mount Nablus and al-Balqa'. (Volume 1 was published in Damascus in 1938.) He was one of the first to understand the importance of the sharia court records and the need to use them as a reliable source for writing social and economic history. His interest in heritage was expressed in the museum he set up to house the rare antiquities he collected. In addition to history, he also wrote poetry, which he began writing at an early age. When he died he left several manuscripts with instructions for them to be published.

Nimr was known as an honest, candid, and modest man. He was a historian, a poet, and a social reformer. He was known for favoring religious reform, calling on the Arabs to unite and look toward the East.

Ihsan al-Nimr died in Nablus and was buried in the family tomb.

[A History of Nablus and al-Balqa']

[Our Maladies and Our Problems]

[A History of the Hamdanids]

[The Eternal Acts of Heroism of the Algerians]

[The Work Ethic and the Qualities of Workers]

[Unification is the Way to Progress]

[Insights and Investigations into Ottoman History]