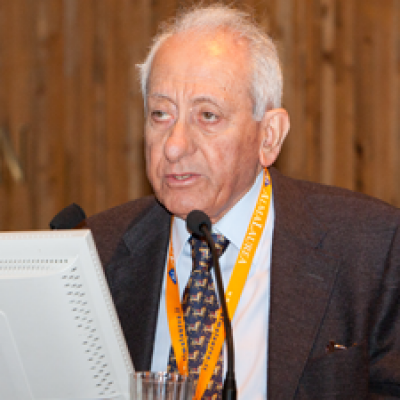 Antoine Zahlan was born in Haifa. His father was Benjamin Zahlan, and his mother was Marie Khoury. He had a brother, Paul, and two sisters, Renée and Nadia.

He met his first wife at the American University of Beirut and they had a daughter, Amal.  He was then married to Rosemarie Janet Said for more than thirty years.

Zahlan received his primary education in the École des Frères in Haifa and then attended Terra Sancta College in Jerusalem for about five years as a boarding student.

On the eve of the occupation of Haifa by Zionist forces in April 1948, Zahlan and his family were forced to take refuge in Lebanon, where they rented a house in the town of Aley.

He travelled to the United States to pursue his higher education at Syracuse University in New York, where he was awarded a doctorate in physics in 1956.

After returning to Beirut, Zahlan worked from 1956 to 1969 as a professor and head of the physics department in AUB’s faculty of sciences.

In the late 1960s, Zahlan, Walid Khalidi, and Burhan Dajani proposed to King Hussein of Jordan the idea of setting up a scientific association that would tackle the large gap in scientific knowledge between the Arab world and the Western world that was exposed by the disaster of the June 1967 war. The king received the idea well and stipulated that the three men be trustees of the association, which was called the Royal Scientific Society. Zahlan resigned from AUB in 1969 and took up the position of executive director of the association, which is still in existence. But fortune is fickle, and the tragic events of September 1970 between the Palestinian resistance and the Jordanian authorities took place. The three colleagues decided to withdraw from the society, and Zahlan returned to AUB.

In 1973 the same trio (Khalidi, Zahlan, and Dajani) reached an agreement with Palestinian businessman Hasib al-Sabbagh, a friend of Khalidi, to make a second attempt to implement the idea on which the scientific society in Amman was based, with the difference that the patron would be Sabbagh himself and the new institute would be a commercial enterprise called Arab Projects and Development (APD); all the profits it made would be reinvested exclusively in the work of the institute. The board of trustees of the institute were Sabbagh, Khalidi and Dajani. Zahlan resigned from his position at AUB to assume the role of general manager of the institute. One of the most important projects of the institute was a survey of advanced human resources in Iraq. Unfortunately, when civil war broke in Lebanon, the institute's work was disrupted and in 1976 it had to cease operations.

In the meantime, Zahlan had completed in 1975 an unusual forward-looking paper entitled “The Future of the Arab World in the Year 2000.” In the same year he was elected president of the Arab Physics Association.

From 1976 to 1978, Zahlan was a visiting fellow at the University of Sussex in England. After returning to Beirut he set up a private consultancy, and throughout the 1980s and 1990s he worked as a consultant and expert for several Arab and international institutions. He worked as an expert and a founder of the Arab League's Diaspora Brains Trust; as a technology transfer and development expert at the UN's Economic and Social Commission for Western Asia (ECSWA); as adviser to the Abdul Hameed Shoman Foundation on an agricultural reform project in Jordan, Syria, and Sudan; as adviser to Consolidated Contractors Company; as adviser to the International Labour Organization on technology transfers; as a consultant to the World Bank on a technology transfer strategy in Palestine; and in other institutions as well. His most important role as a consultant may have been his work for the Arab League, preparing for the Arab summit of 1980 the agenda of which included the adoption of the “Charter for National [Pan-Arab] Economic Action” and the “Decade of Arab Development”.

In 2008 and 2009, Zahlan also worked as an adviser to the Prime Minister's office in the autonomous Kurdish region of Iraq to set up local industries.

In 2010 Zahlan set up the Arab Scientific Community Organization, which is supervised by a board of trustees made up of scientists from Iraq, Egypt, Kuwait, Qatar, and Lebanon. Its aim is to strengthen the links between Arab scientists, encourage cooperation in research and practical applications, and exchange information across the Arab world.

Antoine Zahlan is one of the most prominent Arab scholars in the field of applied sciences, the relationship between the sciences and society and between the sciences and progress, the social responsibility of scientists, and the adoption of scientific and technological systems in  Arab countries. He is also one of the most prominent Arab academics in the field of future studies. He has a distinctively pan-Arab outlook that aspires to an Arab renaissance based on science, technology, culture, and equal citizenship for all.

Zahlan passed away in Beirut on 1 September 2020.

Zahlan has written dozens of academic papers on science, technology, and education in Arabic and English:

[Science and Higher Education in Israel]

[Science and Technology in the Arab–Israeli Conflict]

[The Technological Dimension of Arab Unity]

[Arabs and the Challenges of Science and Technology: Progress Without Change]

[Technical Illiteracy and Its Effect on Arab Development]

(with Edward Hagopian) "Palestine's Arab Population: The Demography of the Palestinians." Journal of Palestine Studies 3, no. 4 (Summer 1974): 32-73.