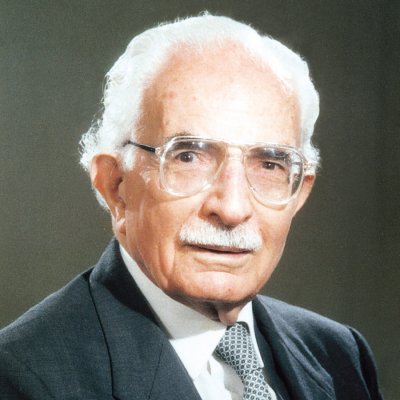 Nicola Ziadeh was born in Damascus, where his father worked as an assistant engineer on the Hijaz Railway.

His father was Abduh Ziadeh from Nazareth and his mother was Leah Aline Shurrush Rihani. He had a sister, Marie, and three brothers: Constantine, Alfred, and George.

His wife was Margaret Shahwan and he had two sons: Raid and Basim.

Nicola Ziadeh began his primary education at the Collège des Frères in Damascus and then, after his father died and he returned to Nazareth with his mother and brothers, he went to the official primary school in the town of Tulkarm. In 1917 he and his family moved to Jenin. After missing school during 1917 and 1918, he enrolled in Jenin primary school in 1919.

In 1921 Ziadeh passed the entrance examination and went to the teachers’ training college in Jerusalem, later known as the Arab College. He graduated in 1924.

Ziadeh taught in Nazareth and in the village of Tarshiha for a year and then moved to Acre, where he taught in the secondary school from 1925 to 1935. He helped to found the Orthodox Club in Acre in 1929 and was elected to its founding committee.

For two years Ziadeh studied the subjects on the Matriculation syllabus on his own; he took the exams and obtained his Matriculation certificate in 1927. This qualified him to teach at a university. In 1931 he completed the requirements for the higher education certificate. The education department in Palestine considered those who had passed this exam as equivalent to graduates from the American University of Beirut. At about the same time, Ziadeh’s first articles were published in al-Muqtataf magazine.

Ziadeh then obtained a grant from the Palestine education department to study ancient history. He went to London in 1935 and enrolled at University College London. While studying there, he spent nine months in Germany in 1936 and 1937 in order to learn German. He stayed a while in Berlin and then went to the University of Munich, where he took a course in the history of the Hellenistic period and another course in the history of the Crusades. In the summer of 1938 he went to the French city of Besançon to study French.

After obtaining a bachelor’s degree in history from the University of London in 1939, Ziadeh went back to Palestine and worked for eight years (1939–47) teaching history in the Rashidiyya School and the Arab College in Jerusalem. He gave dozens of lectures and gave interviews to Radio Palestine on a variety of subjects. Every two weeks he prepared talks for the Near East Broadcasting Station, which was set up in Jenin in 1942 before it was moved to Jaffa. Some of his talks formed the nucleus of his first book Suwar min al-tarikh al-arabi (Images from Arab History), which was published by Dar al-Ma‘arif in Egypt in 1946.

In the academic year 1945–46 Ziadeh was asked to give two lectures a week to students in the Middle East Centre for Arabic Studies, which the British Foreign Office had opened to teach young British officers and civil servants Arabic and Arab history.

Between 1945 and 1947 Ziadeh had written several educational books, which were published by al-Maktaba al-Asriya in Jaffa, the most important of which were his two-part al-‘Alam al-qadeem (The Ancient World), his ‘Alam al-‘usur al-wusta fi orubba (The World of the Middle Ages in Europe), and al-Mukhtar min al-tarikh al-arabi (Selections from Arab History), the first part of which was titled Wathbat al-arab (The Arabs’ Leap). In the same period he and his friend Ali Shaath edited several books in the General Knowledge Series, a format inspired by the Iqra’ series published by Dar al-Ma‘arif in Egypt.

In September 1947 Ziadeh enrolled in a doctorate program in Islamic history at the University of London with a grant from the British Council. While in Britain, Ziadeh was appointed reader in the Oriental Languages department at Cambridge University in June 1948, and he started writing presentations for the Arabic department of the British Broadcasting Corporation.

In May 1949 Ziadeh moved to Benghazi in Libya to work as assistant director of education in Berca, but he went back to Beirut in September of the same year and was hired as assistant professor in the history department at the American University of Beirut, at the same time working on his dissertation. He was awarded the doctorate degree in November 1950.

In October 1956 he was appointed associate professor and was promoted to the rank of professor in 1958. He was acting chair of the history department in 1955 and 1956 and chair of the department from 1956 to 1966. He continued to work at American University of Beirut until he retired in 1973.

After retiring, Ziadeh was asked to supervise doctoral dissertations in Arab history at Saint Joseph University in Beirut. He also taught history at the University of Jordan for two years (1976–78) and the Lebanese University for two years. Between 1984 and 1990 he gave lectures on the history of Islam and Islamic civilization at the Near East College of Theology in Beirut, which trains evangelical pastors.

Ziadeh visited almost every Arab country, as well as Turkey, India, Pakistan, and the Central Asian republics, to find out about the landmarks of Islamic civilization.

Nicola Ziadeh won many honors, including Lebanon’s National Order of the Cedar with the rank of knight in 1973, the Order of Civil Merit of the Syrian Arab Republic (excellent class) in 2002, and the Order of Merit of the (Greek Orthodox) Patriarchate of Antioch and All The East in 1993. He also won awards and prizes from Arab universities and cultural organizations. In 1997 the American University in Beirut set up an annual scholarship for history graduates in his name.

Nicola Ziadeh died in Beirut in 2006 and was buried there.

He was a prominent Arab historian and a pioneer of modern and enlightened Arab thought who taught generations of students. He was known for his Arab nationalist inclinations; a Christian, he considered Arab-Islamic civilization as his own heritage. He loved Arab cities, especially Jerusalem, and was known for his mild temperament, his sharp memory, his eloquence, and his prolific output. He wrote forty-one books in Arabic and six books in English, translated several books from English to Arabic and wrote hundreds of articles and research papers. He spoke English, German, and French and knew Greek and Latin.

In 2002 al-Dar al-ahliyya li-l nashr wa-l tawzi' (al-Dar al-Ahliyya Publishing and Distribution) in Beirut published his complete works in twenty-three volumes. Riad al-Rayyes Books published a collection of many of his articles in several volumes.

[Eminent Arab Reformists of the 18th and 19th Centuries]

[Geography and Travels Among the Arabs]

[Damascus Under the Mamluks]

[The World of the Arabs: Its Geography, History and Sources of Wealth]

[Arabism in the Context of Nationalism]

[Christianity and the Arabs]

Sanusiyah: A Study of a Revivalist Movement in Islam. Leiden: Brill, 1958.

Damascus under the Mamluks. Norman: University of Oklahoma Press, 1964.