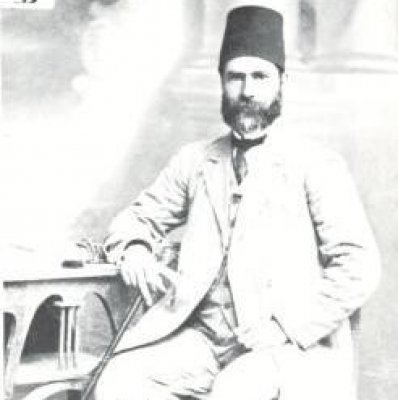 Said al-Shawwa was one of the most prominent figures of Gaza City and one of the biggest landowners in Palestine. He was born into an affluent and illustrious family in the Shuja‘iyya neighborhood of Gaza City. He was the son of Mohammad al-Shawwa. His grandfather Khalil is considered to be the founding father of the Shawwa family, and most of the branches of this family can trace their lineage back to him. He and his wife, Hafiza Shaath, had five sons, Adel, Rushdi, Izzeddine, Saadi and Rashad.

After finishing his elementary education, he worked as a merchant and dealt in his trade with the people of the villages. Emulating his grandfather, he worked hard and amassed a fortune, becoming one of the biggest landowners in Palestine.

In 1904, Shawwa was appointed a member of the council of the subdistrict of Gaza, replacing his father. Then, in 1906, he was appointed chairman of the municipality council of Gaza City, a position he held for more than ten years until the British occupation of Palestine. As chairman he built the municipal town hall, the Amiri school, and the Municipal Hospital. Historian Aref al-Aref credits him as the first to introduce the modern plow into farming in Gaza in 1911.

After the restoration of the Ottoman Constitution in 1908, Shawwa joined the Committee of Union and Progress in Gaza. During World War I, the Ottoman army unsuccessfully attempted in early 1915 to occupy the Suez Canal, which was controlled by British forces; the Ottoman forces retreated to Gaza, and he rendered many services to the army. As a result, he became a confidant of Jemal Pasha, the Ottoman governor of the Levant and the Turkish Hijaz, who decorated him with medals as a gesture of appreciation for his assistance to the Ottoman army while he headed Gaza City’s municipal council. Because of this close relationship with Jemal Pasha, he was able to secure a stay of execution for his son Rushdi and his relative Assem Bseiso in Beirut in 1915. .

After the British took control of Palestine, they arrested Said al-Shawwa because of his close relations with the Turks; he was pardoned soon afterward. After his release from prison, Shawwa became active in the Palestinian national movement. He represented Gaza in the first Palestinian National Congress that was held in Jerusalem (27 January–10 February 1919) and also attended the fourth and fifth sessions of the congress in 1921 and 1922, respectively.

Shawwa participated in the meeting between the British Mandate authorities and Palestinian notables and ulamas on 9 November 1920 to discuss how Islamic affairs were to be organized and managed. The meeting ended with the formation of a committee of eight Muslims that included Shawwa as the representative of Gaza. This committee held meetings under the chairmanship of the British High Commissioner and then resolved on 12 March 1921 that a “Committee for Moslem Religious Affairs” should be formed. By December 1921, the latter was officially called al-Majlis al-sharʿi al-Islami al-aʿla (translated by the British as the “Supreme Moslem Sharia Council) and was entrusted with the task of presiding over the issuing of fatwas, or legal opinions, and Sharia courts, as well as the managing of waqfs or religious endowments.

In 1922, general elections were held all across Palestine to elect the five members of the Supreme Muslim Council. Shawwa was elected as the representative of the southern district. Other members of the council included the Mufti of Jerusalem, Muhammad Amin al-Husseini (who became president of the council); Shaykh Muhammad Murad from the district of Haifa; Abdel-Latif Salah from the district of Nablus; and Abdullah al-Dajani from the district of Jaffa. Shawwa was elected to the council three times, and he remained a member until his death in 1930. He was close to the Mufti of Jerusalem in the positions he took and was his strongest ally in Gaza; the mufti reciprocated by supporting his projects.

In 1924, Shawwa led a delegation of ulamas to Mecca to meet with Hussein bin Ali the Sharif of Mecca and to explain to him the dangers imminent from the increasing Jewish immigration to Palestine and the British complicity with it. They called on him to intercede on their behalf with the British to stop their support for this immigration and asked him to be guardian of the alAqsa Mosque in Jerusalem. Shawwa also received King Faisal I and Hussein’s son Prince Abdullah in Gaza.

Shawwa constructed several mosques and schools in Gaza. In 1926–27, he supervised the restoration and reconstruction of the Great [Omari] Mosque, which had been in a state of ruin. He continued to manage waqf endowments and to help address the needs of the people of Gaza until his death in October 1930. He was laid to rest in Gaza following a large funeral in which he was eulogized by Husseini, mufti of Jerusalem and head of the Supreme Muslim Council, as well as the mufti of Nablus. At the time of his death he owned about 50,000 dunums of land in Gaza and Bir al-Sabiʿ.

Said Shawwa was a self-made man with a strong personality. His door was always open to anyone who called on him. It is fair to describe him as the most powerful among many prominent figures of the region of Gaza. He worked closely with the ruling powers to strengthen both his own influence and theirs at the same time. After his passing, his sons continued to play a prominent role in the political, social, and economic life of Gaza. His granddaughter, Rawia, daughter of his son Rashad, was one of the most prominent female figures in Gaza; she was elected to the Palestinian Legislative Council in 1996 and again in 2006.