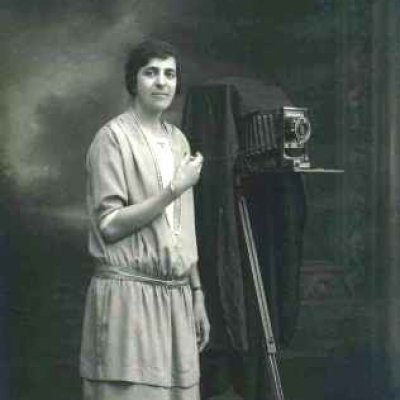 Karimeh Abbud was born in Bethlehem into a Lutheran family originally from the village of Khiyam in the Marja‘youn district of South Lebanon that had moved to Palestine in the mid-nineteenth century and settled in Nazareth. Her mother, Barbara Badr, was a school teacher; her father, Said Abbud, was a pastor of the Evangelical Lutheran Church in Bethlehem. Abbud had three brothers (Najib, Karim, and Mansour) and two sisters (Catherina and Lydia). Her husband was Faris Tayeh. She had a son, Samir. Her family had close ties with English missionaries. She grew up in a multilingual and multicultural environment, which proved to be helpful when she wanted to establish contact with foreign and local Arab photographers.

Abbud went to primary school in Bethlehem and completed her secondary schooling in the Talitha Kumi School in Bayt Jala and Collège des Frères in Jerusalem. Then she went to the American University of Beirut where she studied Arabic literature.

Karimeh Abbud had learned the art of photography from an Armenian photographer.  She began to take photographs herself in 1913, after her father gave her a camera as a present. She often accompanied her father on work trips to cities and villages, which provided an opportunity for her to take photographs in Bethlehem, Tiberias, Nazareth, Haifa, and Qisarya (also known as Caesarea.)

After returning to Palestine from her studies in Beirut in the early 1920s, Abbud opened her own studio in her home in Bethlehem and started earning money by taking pictures of women and children and wedding ceremonies. She became a professional photographer in the early 1930s and became renowned for adding color to her prints. She would import printing paper from Egypt and develop the pictures in her own darkroom. Women from conservative families soon began to muster the courage to visit her and get their portraits done without any embarrassment. They were soon joined by women from Gaza, Jaffa, Haifa, and Jerusalem who were also encouraged to visit her for the same purpose. She herself began to travel to Tiberias, Haifa, and Caesarea, and she went to Lebanon, Syria, and Jordan on assignments for individual clients or to document certain historical and religious landmarks.

She eventually managed to open her own photography studios in Nazareth, Bethlehem, Haifa, and Jaffa. Abbud’s work depicted the daily lives of Palestinian women in their traditional embroidered dresses whose designs represented the villages and towns that they came from.

Karimeh Abbud died on 27 April 1940 after she became ill with tuberculosis and suffered from continuous bouts of fever. She was buried in the cemetery of the Evangelical Lutheran Church in Bethlehem.

Abbud was an educated woman who spoke Arabic, German, and English fluently, and her prominence as the first woman photographer in Palestine broke stereotypes of Arab women. She played a major role in a profession that was then alien to Arab society, given that many conservative families would not pose in front of what they regarded as a strange contraption, with the exception of a few eminent families. Abbud’s photographs provide a visual documentation of social life in Palestine. She also successfully challenged the British occupation with a silent documentary that filmed life in Palestine before the Nakba.

Her name received attention at the beginning of the twenty-first century, when she was mentioned by historian Issam Nassar in his book Laqtat Mughayira [Different Snapshots: Early Local Photography in Palestine (1850-1948)], published in 2005. Then, in the summer of 2006, an Israeli antiques collector from Jerusalem named Yoki Boaz published an announcement in local Arabic newspapers about the acquisition of a set of photographs bearing the autograph of the photographer Karimeh Abbud and asked for help in finding out more information about this Palestinian photographer and her origins. Researcher Ahmed Mrowat corresponded with Boaz, who brought to Nazareth four medium-sized albums of Abbud’s photographs, stamped by her in Arabic and English with a seal bearing her name and the words "Karimeh Abbud musawwirat shams / Karimeh Abbud lady photographer." After seeing this set, Mrowat continued his efforts to expand the collection and obtained three more albums of Karimeh’s photographs from the Abbud family in Nazareth, some of which were signed by her in Arabic and others in English stamped by her with the same seal.

A documentary titled Suwar ghayr muktamila [Restored Pictures] was made by the director Mahasen Nasser Eldin to immortalize her memory and her pioneering role. A book about her life and significance was published, which included contributions by Mrowat, historian Issam Nassar, and Reverend Mitri Raheb. The poet and novelist Ibrahim Nasrallah wrote a novel based on her, and several exhibitions have been organized in Palestine and Lebanon to display her collection of photographs and to make people aware of her stature as an integral part of Palestinian history and the Palestinian narrative.

In 2016, on the 123rd anniversary of Abbud’s birth, Google dedicated a Doodle to her legacy, in which she was depicted holding a camera. In the same year, the Karimeh Abbud Photography Competition Prize was launched by Dar al-Kalima University College for Arts and Culture in Bethlehem, with the goal of encouraging talented young Palestinian photographers to become professionals.

A Rich and Diverse National Heritage

Documenting Life in a Time of Change