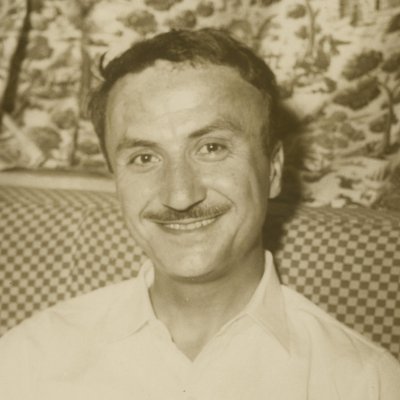 Bassam Shak’a was born in the city of Nablus to Ahmad Shak’a. He and his wife Inaya al-Fassed had two sons, Nidal and Haytham, and two daughters, Ghadir and Hana.

He attended al-Najah Public School and began to be politically active from an early age. In 1948, he joined the Arab Liberation Army and fought in its ranks in the Nablus region. In 1952, he joined the Ba’th Party and participated in the nationalist struggles that took place in the 1950s in Jordan against the Baghdad Pact and in support of the Arabization of the Jordanian army and the termination of the Anglo-Jordanian treaty. He was hounded by the authorities and forced to flee to Syria, where he continued his nationalist activism for Arab unity, especially the union between Egypt and Syria.

After the collapse of the experiment of the United Arab Republic and its break-up in September 1961, Shak’a, who had resigned from the Ba'th Party, was jailed in Mezzeh prison in Damascus, and then deported to Egypt. He returned to Nablus in 1965 after King Hussein issued a general amnesty for nationalist, Pan-Arabist, and communist activists.

After Israel occupied the West Bank in June 1967, Shak’a fought the Israeli occupation and began actively mobilizing Nablus against Israel's oppressive policies and its settlement projects. The major nationalist forces and figures, who were affiliated with the Palestinian National Front in the occupied territories formed in August 1973, had confirmed their support for the Palestine Liberation Organization (PLO) as the sole legitimate representative of the Palestinian people. When they decided to contest municipal elections in the West Bank in April 1976, Shak’a headed the National Front’s electoral ticket in the municipality of Nablus. There, along with most of the other municipal councils in the West Bank cities, the National Front won a landslide victory.

In response to Egyptian president Anwar Sadat’s “initiative” that eventually resulted in the Camp David Accords and the Palestinian Autonomy plan, representatives from nationalist groups, municipalities, trade unions, and professional syndicates in the occupied Palestinian territories formed the National Guidance Committee in November 1978, with the aim of mobilizing the masses and organizing the resistance to Israel’s schemes. Shak’a was one of the core members of this committee, and the occupation authorities decided to silence them. They issued an order to deport from the occupied territories three prominent figures: Fahd al-Qawasmi and Muhammad Melhem, the mayors of Hebron and Halhul municipalities, respectively, and Rajab al-Tamimi, the judge for Hebron’s Islamic court. On 8 November 1979, they issued an order to deport Shak’a, the mayor of Nablus, citing as justification his statement to the coordinator of the Israeli army's operations in the occupied territories, General Danny Matt, that Israel bore responsibility for the Israeli victims of the commando operation led by Dalal Mughrabi on the Palestinian coast in March 1978.

The Israeli occupation authorities arrested Shak’a as a first step in his deportation, which sparked a wave of mass protests. A general strike was declared in Nablus and other Palestinian cities. On 12 November, a meeting of West Bank mayors was held in Ramallah. Karim Khalaf, the mayor of Ramallah, read out a communiqué addressed to the Israeli defense minister signed by twenty-one mayors, announcing their intention to resign the next day in the event of Bassam Shak’a's deportation. Nationalist groups and prominent personalities in the Gaza Strip also declared their solidarity with him and conducted an international campaign to condemn the decision to deport him. Israeli communist lawyer Felicia Langer fought the order with tenacity, forcing the occupation authorities to revoke the deportation order and to release him.

However, on 2 June 1980, only a few months after Shak’a resumed his political activity and his duties as mayor of Nablus, a Zionist terrorist group attempted to assassinate him along with Karim Khalaf and Ibrahim al-Tawil, the mayor of al-Bireh, by planting explosive devices in their cars. Two of these devices exploded, which resulted in the amputation of both of Shak’a’s legs and one of Khalaf’s legs; Tawil escaped unhurt; the device was discovered before he got into his car.

Interviewed after the assassination attempt, Shak’a declared: "Even if they cut off my feet, they will not be able to cut me off from my struggle. The Zionists wanted me to die, but God granted me life so that I continue my mission to stand up for a free, Arab Palestine." He further commented on the loss of his legs by saying, "They brought me closer to the land," referring to the land of Palestine that he was fighting for. He added, "I [still] have my heart, my mind, and a just cause to fight for. I do not need my legs."

Shak’a returned to Nablus after five months of treatment in Jordan and Britain to carry on the struggle against the occupation alongside the nationalist forces and prominent figures in the occupied territories. The nationalists were able to thwart Israeli plans to sidestep the PLO by creating the village leagues, a comprador Palestinian leadership that would collaborate with Israeli military rule. Shak’a and his comrades also prevented Israel from transforming the occupation’s military rule into a civil administration.

Shak’a firmly opposed the Oslo Accords, signed in September 1993. He was one of the signatories to the strongly worded statement issued by twenty politicians, intellectuals, and academics in the occupied territories in September 1999 “against the Oslo Accords and the widespread corruption” in the institutions of the Palestinian Authority (PA). Because of his independent stance and his refusal to be co-opted, the PA put him under house arrest. But they were unable to sideline him; he responded to the house arrest order by asking his driver to drive him around the streets of Nablus in his car.

Bassam al-Shak’a died in Nablus on 22 July 2019 after a long illness. The funeral ceremony took place at the Hanbali Mosque, and his funeral procession was attended by thousands of Palestinians. He was laid to rest in the city’s Western Graveyard. For three days after his burial, thousands of Palestinians from all over the West Bank thronged the tent erected for mourners outside his home in the Makhfiyya neighborhood. PA President Mahmoud Abbas also eulogized Shak’a, praising his "deep sense of attachment to his homeland Palestine, and ceaseless struggle for the just cause of our people and their legitimate rights, and his adherence to and insistence on national unity."

A memorial service was conducted for Shak’a on 12 November 2019 at al-Najah National University in Nablus, attended by officials and residents from the West Bank, Palestinian towns and villages in Israel, and the occupied Syrian Golan Heights. The city council of Nablus decided to name a Nablus central squares after Shak’a, and the Ramallah city council likewise announced its intention to name one of the city’s streets after him.

Bassam Shak’a, the mayor of Nablus, was one of the most courageous symbols of the Palestinian struggle for national liberation against the Israeli occupation. He was deeply respected by men and women from inside and outside Palestine. Throughout his life, he was a bearer of the ideology of Arab nationalism and the aspiration for Arabs to unite as one nation; he believed that Zionism not only targeted Palestine, but rather the entire Arab world: because Palestine is located at the center of the Arab world, controlling it meant controlling the entire Arab nation.