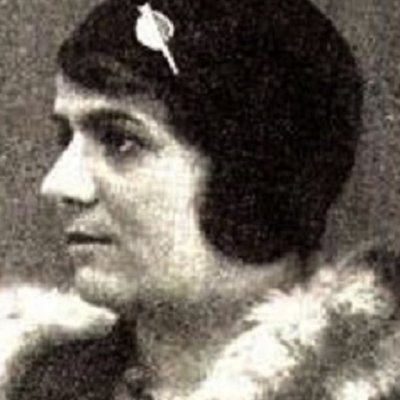 Matiel Mogannam was born in Lebanon on 15 February 1899, to a Palestinian Christian family that migrated to New York City when she was a child. In the United States she married Mughannam Mughannam, who was born in Ramallah and studied law at St. Lawrence University in New York. In the mid-1920s they moved to Palestine and were soon active politically. Mughannam Mughannam was elected secretary of the 7th Palestinian National Congress in 1928 and secretary of the National Defense Party when it was founded in 1934. His office in Jerusalem was well-known for defending nationalist prisoners.

Matiel Mogannam took part in preparatory meetings in her house and in Tarab Abd al-Hadi's house which led to the organization of the first Palestine Arab Women's Congress in Jerusalem on 26 October 1929. This was the first time that Palestinian women took part in politics; some 200 Palestinian women attended from Jerusalem, Jaffa, Haifa, Acre, Safad, Nablus, Ramallah, Jenin, and other towns. It issued a memorandum explaining the reasons for the Buraq Uprising of August 1929 and supporting the demands of the executive committee of the Palestinian National Congress, including ending Jewish immigration, repealing the Balfour Declaration, establishing a national government answerable to a legislative council, and developing industry and the national economy. In social affairs, the women’s congress advocated raising the status of Arab women in Palestine and addressing their concerns.

Matiel Mogannam was a member of the delegation chosen by the congress to meet the British High Commissioner in Palestine, Sir John Chancellor, and his wife. At the meeting she made a speech in English while a colleague, Tarab Abd al-Hadi, made a speech in Arabic. The delegation submitted a memorandum to the high commissioner to convey to the British government: “We, the Arab women of Palestine, having been faced with great economic and political difficulties and seeing that our cause has not so far received the sympathy and assistance of which it is worthy, have finally decided to support our men in this cause, leaving aside all other duties and tasks in which we have hitherto engaged ourselves. This deputation of all the Arab women in Palestine has now come to lay before Your Excellency their protests and resolutions passed in their first Congress and to ask, as of right, that our demands be granted.”

The delegation submitted other grievances to the high commissioner, including a protest that the British police were mistreating Arab prisoners and had beaten students at the Salahiyya School in Nablus during a strike to protest the policy of the Mandate government. The delegation also protested the Mandate government’s donation of £10,000 to Jewish settlers without allocating any money to distressed Arabs.

When the delegation returned to the congress, participants started a demonstration of 120 cars, in defiance of the Mandate authorities’ objections. The demonstration went around the streets of Jerusalem and stopped at the various foreign consulates, where the women handed leaflets listing the conference resolutions. The demonstration aroused great popular enthusiasm and formed a starting point for direct action by Arab women in Palestine.

At the end of its meetings, the Palestine Arab Women's Congress elected an executive committee of fourteen women to implement its resolutions and recommendations. This committee, the Arab Women's Executive (AWE), was tasked with coordinating its activities with the executive committee of the Palestinian National Congress and managing the activities of the women's movement in the country. Matiel Mogannam was chosen as English-language secretary to the committee, which began its work by sending telegrams to the Queen of England, the Secretary of State for the Colonies, and the National Women’s League: “Two hundred Palestine Arab Moslem and Christian women representatives met on twenty-sixth instant in Congress Jerusalem, unanimously decided demand and exert every effort to effect abolition Balfour Declaration and establish National democratic Government deriving power from Parliament representing all Palestinian communities in proportion to their numbers. We beseech assistance in our just demands.”

In November 1929, the Arab Women's Executive set up an association called the Arab Women's Association (AWA), which opened branches in most Palestinian towns. It began to collect donations and write petitions and organize protests against the practices and abuses of the Zionist movement. It also set up a school and a sewing workshop in the Musrara neighborhood of Jerusalem.

On 3 September 1930, the National Women’s League invited Matiel Mogannam to send a delegation of women to London. The invitation said: “The more movement there is between the Arabs and their many friends and supporters in England, the more effective for the whole cause, and I am writing to ask whether it would not be possible for you with another elected representative to visit England for a few weeks, and as Arab women leaders come in contact with people here and from the women's point of view make another historic appeal in London such as you so effectively did last year to the High Commissioner.”

Matiel Mogannam participated in a women's march in Jerusalem on 15 April 1933 to protest the Mandate government’s policies toward Jewish immigration into Palestine. At the mosque of Omar ibn al-Khattab, she made a speech to the marchers, comparing the promise that Caliph Omar gave to Patriarch Sophronius in the year 15 AH (637/8 CE) and the promise that the British general, Edmund Allenby, gave when he entered Jerusalem at the end of 1917. She said: “The Arab nation which lives in the neighbourhood of these two Harams, the Mosque of Aqsa and the Holy Sepulchre, held in veneration and sacredness by both the Eastern and Western worlds, will not tolerate any such injustice or submit to such humiliation. ... We will continue to work, fully united, until we attain our national pledges. The Allies entered into an alliance with us when they were in need of our help. We fought with them side by side. Many of our men met their death as martyrs on the battlefield. ... But when the allies attained their aim, they disregarded us and infringed the pledges which they gave us…. It is befitting us, my dear sisters, now that we stand reverently in the Mesjid of Omar Ibn Al-Khattab, the great Arab Conqueror, to review for a while our past and to draw from our glorious history a lesson for our future work and an incentive for our national struggle.”

Matiel Mogannam participated in the conference organized by the Arab Women's Executive on 11 May 1936, in the Orthodox National School in Jaffa under the chairmanship of Adele Azar. The conference announced that it was committed to the decisions of the Arab Higher Committee chaired by Mohammed Amin al-Husseini, especially those urging women to observe the general strike and the call on shopkeepers to close their shops and boycott non-national goods.

In 1937 Matiel Mogannam published a book in English on women and the Palestinian cause, in which she argued that the lack of a Palestinian national government contributed to prevent reforms which might have paved the way for effective women's movements. This situation confined women's organizations to a social and charitable role, which lacked the strength and organization to influence the British project.

Matiel Mogannam was a member of the Palestinian women's delegation that participated in the Eastern Women's Congress, held in Cairo from 15 to 18 October 1938, in defense of Palestine at the invitation of Huda Sha‘rawi, head of the Egyptian Feminist Union. She was chosen as a member of the auxiliary secretariat and of the conference's information bureau. The conference passed several resolutions and proposed that the Jews in Palestine be disarmed like the Arabs, that the Red Crescent set up a special unit for wounded Palestinians, and that the Egyptian Ministry of Education and Egyptian institutions educate the children of Palestinian martyrs free of charge.

On 9 February 1941, an article by Matiel Mogannam appeared in the magazine Huna al-Quds (This Is Jerusalem Calling), which was issued by the British publications office in Palestine, on the attitude of Arab women toward the war. In it she noted that women instinctively rejected war and bloodshed and that her generation had been unlucky to witness two wars in less than twenty years. “The violence has cost the lives of innocent people and their blood has been shed for reasons of greed and selfishness,” she said. Although Palestine was not one of the battlefields, it was a target for air raids, which had killed a large number of people, and this gave Arab women “a duty to undergo rapid training in first aid and nursing, to assist the needy and afflicted, to spend frugally, avoid luxuries, and act in solidarity until the light of peace shines again and humanitarian principles triumph over barbarism and savagery,” she wrote.

Little was heard of Matiel Mogannam after the Palestinian Nakba in 1948. She returned to the United States in 1980 and died in Arlington, Virginia of congestive heart failure on 11 August 1992.

Matiel Mogannam was a pioneer of the women's movement in Palestine and a political activist opposed to the British Mandate and the Zionist movement. She was known for her deep humanitarian inclination, and she used her excellent language skills to serve her people's cause.

[The Historical Roots of the Struggle of Palestinian Women in the National Movement from the Mandate to 1936), Sāmid al-Iqtisādī, No. 62 (July/August 1986).]