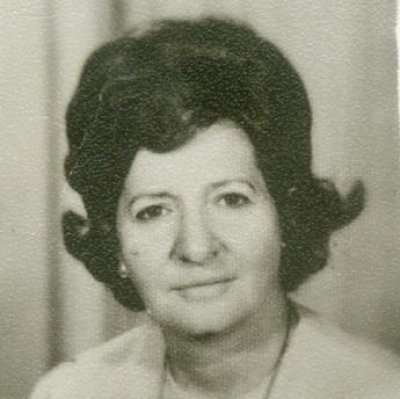 Samira Abu Ghazaleh was born in 1928 in Nablus to one of the city’s prominent families. Her father was Mohammad Zaki Abu Ghazaleh. She married an Egyptian, Gamal Salim, and had a daughter named Mona.

From her earliest years, she rebelled against everything that curtailed her freedom and restricted her independence.

Abu Ghazaleh completed her primary education in the city of Ramla, where her father was working. She continued her studies at the Female Teachers’ Training College in Jerusalem and graduated in 1947. While she was a student there, she and her classmates participated in the popular resistance against the British forces and Zionist groups. They would walk out of class to throw stones at the buses going from Jerusalem to Jaffa.

On the eve of the Nakba in 1948, Abu Ghazaleh was an active volunteer, helping to collect gifts, clothes, and food for the Palestinian fighters. She encouraged her comrades to undergo combat training, and she joined the Egyptian Red Crescent in Ramla.

During the Nakba, she and her family were forced out of Ramla; they returned to Nablus. She and her sister Nadeera reached Nablus before her two brothers, who had to walk all the way from Ramla to Nablus while being shot at. The sisters helped to support their family by opening a school in their uncle’s house, to educate the children of their neighborhood. Then, in 1950, Samira was hired as secretary of the Jordanian Red Crescent in Jerusalem.

In 1952, Abu Ghazaleh received a scholarship to study at the American University of Beirut (AUB), where she enrolled in the Education and Psychology program. Living in Beirut, she had many opportunities to engage in political activities that sought to advance pan-Arabist ideology through groups such as the Arab Nationalist Movement and al-Urwa al-Wuthqa (the Unbreakable Bond), which was founded by AUB professor and Arab nationalist and intellectual Constantine Zurayk. She objected vocally to the invitation to female AUB students to meet and entertain US marines who were “visiting” Lebanon’s beaches, which angered the university administration. She was eventually expelled from the university (along with fourteen other student activists) for demonstrating in 1955 against the Baghdad Pact. By doing so they violated university guidelines according to which students who participated in such demonstrations would no longer be shielded from prosecution, and so she went into hiding for ten days. When news of the students’ expulsion reached Egyptian president Gamal Abdel Nasser, he announced through Sawt al-Arab, an Egyptian radio station, that they would be accepted into Egyptian universities.

Abu Ghazaleh returned to Nablus and became active in the demand for women’s rights, having noticed early on the connection between women’s participation in political work and their demand for political rights, especially the right to vote and the right to run for parliament. She helped organize several rallies to advocate for these rights.

In 1955, Abu Ghazaleh moved to Cairo to complete her university studies and obtained a bachelor’s degree in Arabic literature from Cairo University in 1956. Then she returned to Palestine and began teaching at the Teachers Training College in Ramallah–al-Bireh starting in the 1957–1958 academic year.

However, her family feared that she would be arrested as a result of her political activism and insisted that she return to Cairo. She enrolled in Cairo University and obtained a master’s degree in Arabic Literature in 1962, for a thesis titled “Nationalist Poetry in Egypt and the Levant between the First and Second World Wars.” In the same year, she published another book in Cairo called Mudhakkarat fatat ʿarabiyya [Memoirs of an Arab Girl].

In April 1963, Abu Ghazaleh spearheaded the effort to establish the Palestinian Women’s League in Cairo, joined by other Palestinian women living in the Egyptian capital: Zeinat Abdel Majid, Jihad Salameh, Aida Bamieh, and Raja Beidas. Their political objectives in forming the association were defined as “to come together, organize, and work for the liberation of Palestine.” Then, along with the Popular Mobilization Department of the Palestine Liberation Organization (PLO), she was a member of the preparatory committee (which included representatives of Palestinian women’s organizations both inside and outside Palestine) that founded the General Union of Palestinian Women (GUPW) in Jerusalem in 1965. (The league that had been previously formed in Cairo now became into a branch of this union, and Abu Ghazaleh chaired its executive council until 2010.) From 1965 on, she remained a member of the Palestine National Council and in 1985 was elected to the PLO Central Council.

Abu Ghazaleh also founded the House for Palestinian Female Students in Cairo and contributed to the opening of several other Palestinian “homes” that were projects affiliated to the GUPW, specifically designed to employ women and families.

Simultaneously, for forty years, she hosted a program on Radio Palestine broadcast out of Cairo called Fatat Filastin [Girls of Palestine] and had a weekly column in al-Difaaʿ [Defense] newspaper, published in Jerusalem. She also participated in dozens of Palestinian, Arab, and international conferences.

Samira Abu Ghazaleh was a militant, a writer, and a university professor. She combined politics with culture; she wrote poetry, articles, and scholarly studies, while also advocating collective action and resistance to eliminate the occupation and liberate the land. She devoted her life and her pen to serving the cause of Palestine and the struggle for its liberation.

Samira Abu Ghazaleh passed away in Cairo on 12 January 2017 and was buried in one of its cemeteries. Upon her death, president Mahmoud Abbas eulogized her, lauding her contributions to the various stages of the struggle for national liberation and describing her as someone who had devoted her life “in the service of our people and their just cause.”

[Memoirs of an Arab Girl]

[Call of the Land]