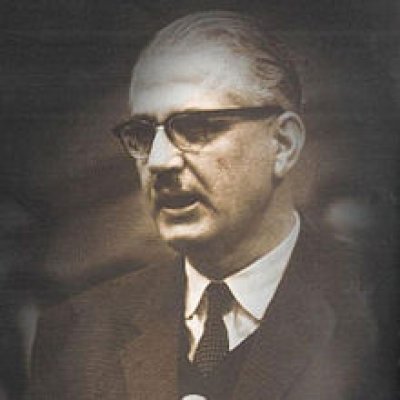 Fouad Nassar, son of Nehme Nassar, was born on 28 November 1914 in the Syrian town of Bludan to Palestinian parents who had moved there from their birthplace Nazareth to work as teachers. The Nassar family returned to Nazareth in 1920, and he was enrolled in primary school. However, he was forced to drop out after finishing fourth grade and work to help meet his family’s household expenses. He worked as a shoemaker.

Nassar became politically active at the age of fifteen, through his participation in the demonstrations that took place in Palestinian cities after the al-Buraq Uprising [habbat al-Buraq] in August 1929 and the execution of the three militants Muhammad Jamjoum, Atta al-Zeer, and Fouad Hijazi on 17 June 1930 by the British authorities.

When the revolution of 1936-1939 erupted, Nassar joined its ranks. He was arrested during the revolution’s first year and charged with forming an underground organization hostile to the British Mandate. The Mandate’s Administrative Court sentenced him to one year’s imprisonment and an additional year in exile, but the authorities released him a few months later along with some other political prisoners and placed him under house arrest in Hebron. He continued his political activity and so he was exiled again to the village of Yatta near Hebron. Not long after, the court sentenced him to another year’s imprisonment, of which he spent four months in Jerusalem’s prison and six months in the Acre prison.

In Acre’s prison, Nassar met some Palestinian communists, and that was the beginning of his association with the Palestine Communist Party and his deep involvement with the communist press. After his release from prison, he was once again placed under house arrest, this time in Nazareth, but he escaped to Hebron. At the end of 1938, he became one of the leaders of the armed rebel groups in the Jerusalem and Hebron regions. He fought in a number of battles against the British, during which he sustained a serious injury in his right hand and shoulder. In the course of these battles, he gained wider recognition and acquired the nom de guerre Abu Khaled, the name he retained until his death. (He never actually had children.)

When the armed revolt in Palestine ended and the British authorities began to close in on the rebels, Nassar sought refuge in Iraq. He arrived in Baghdad in early 1940, where he joined the military academy and graduated after nine months. Then, along with Palestinian rebels who had taken refuge in Iraq, he took part in Rashid Ali al-Gaylani’s [Golden Square] movement to overthrow the British-backed monarchy, which lasted from February to May 1941. After the coup d’état failed, he and his comrades fled to Iran, but they had to return to Iraq because the Iranian authorities denied them permission to stay. The Iraqi authorities transferred them to Kurdistan, where Nassar remained detained for a few months in the summer of 1941.

At the end of 1942, the Mandate government in Palestine granted a general amnesty to those who had participated in the 1936 revolt, including Nassar, so he was able to return to Nazareth in early 1943. However, the British authorities immediately placed him under house arrest. In February 1944, he co-founded the National Liberation League in Palestine along with his Arab communist comrades who had broken away from the Palestine Communist Party, and he was elected to its central committee. When the Arab Workers' Congress in Palestine was established in 1945, Nassar was elected to its leadership. He also worked in editing al-Ittihad [Unity], the organ of both the league and the congress, between 1945 and 1947.

Following the establishment of the state of Israel in May 1948 and the rupture of Palestine as an entity, Nassar settled in the region that became known as the West Bank of the Jordan River, which was annexed by the Hashemite Kingdom of Jordan. He continued his activism with the goal of establishing an independent Palestinian state as defined in UN Partition Resolution 181 and guaranteeing the return of Palestinian refugees who had been forced to leave their homeland in accordance with UN Resolution 194. Because of his activism, the Jordanian government pursued him and forced him to go underground and hide out in a safe house in the town of Birzeit. In May 1951, members of the league who had settled in the West Bank joined forces with a number of Marxists in East Jordan to form the Jordanian Communist Party (JCP). They elected Nassar, who was outside of Jordan, General Secretary of its Central Committee.

On 2 January 1952, Jordanian security forces arrested Nassar on the charge of “disseminating propaganda for communist ideas” that were banned, and they handed him over to the Amman Criminal Court. The court sentenced him on 20 February 1952 to imprisonment with hard labor for a period of ten years. However, his lawyers appealed the sentence, and on 31 May the Amman Court of Appeals reduced the sentence to six years, which he began serving in al-Jafr Prison in the desert.

In late October 1956, a nationalist coalition won the parliamentary elections, and the nationalist government headed by Suleiman al-Nabulsi included two communist deputies, Faiq Warrad and Yaqoub Ziyadin. Jordan went through a brief period of political openness. However, this did not last for long; in April 1957 a coup toppled the Nabulsi government, and the restrictions on political freedoms in Jordan returned. Nassar was forced to move first to Damascus (1957-1958) and then to Baghdad (1958-1959). In 1960, he settled in the German Democratic Republic. During a visit to Sofia, he met a young Bulgarian woman, who became known as Leila. They were married in a modest ceremony attended by a number of his comrades.

Nassar remained in East Berlin until the early fall of 1967, when he decided to return to Amman to lead the JCP, along with his comrades who had been released by the Jordanian authorities. As head of the JCP, he played a prominent role in fostering the party’s relations with the organizations of the Palestinian resistance movement, notwithstanding its political differences with them. ِAlong with the leaders of the communist parties of Syria, Lebanon, and Iraq, he was among those who decided in 1970 to form the Ansar [partisan] fidaʾi, or commando, forces (to support the Palestinian fidayeen). In 1972, he was appointed as a member of the Palestinian National Council (PNC), thus becoming the first Palestinian communist to join the PNC.

In November 1974, on his sixtieth birthday, the Presidium of the USSR’s Supreme Soviet awarded Nassar the Order of Friendship of Peoples, and the Bulgarian government awarded him the Order of [Georgi] Dimitrov.

Nassar died of liver cancer on 30 September 1976 at the age of sixty-two. In a massive funeral procession, he was laid to rest in Amman. The JCP headquarters was flooded with hundreds of telegrams of condolence from many communist and socialist parties all over the world, and Jordanian newspapers published condolence letters; a joint obituary was signed by twenty prominent Palestinian and Jordanian political figures, including Suleiman al-Nabulsi, Ibrahim Bakr, Yahya Hammouda, and Bahjat Abu Gharbiyya. Newspapers in the West Bank carried dozens of obituaries and condolence messages written by Palestinian mayors, union leaders, and prominent figures, as well as by both Arab and Jewish leaders of the Israeli Communist Party. Hundreds of mourners from all over Palestine streamed to the house of his brother in Nazareth, the priest Simon Nassar, to offer their condolences.

Fouad Nassar is considered to be one of the most significant founders of the Arab communist movement in Palestine and Jordan. He got involved in the nationalist struggle at an early age and took an active part in the events of the great Palestinian revolution of 1936. He remained aware of the importance of cultural and intellectual activity and left behind a large archive of articles in the newspaper al-Ittihad and al-Ghad [the Morrow] magazine prior to the Nakba, and then in the journals of the JCP such as al-Muqawama al-Shaʿbiyya [Popular Resistance], al-Jamahir [The Masses] and al-Haqiqa [The Truth]. He was an advocate of national unity and strengthening the fraternal relationship between the Palestinian and Jordanian peoples.