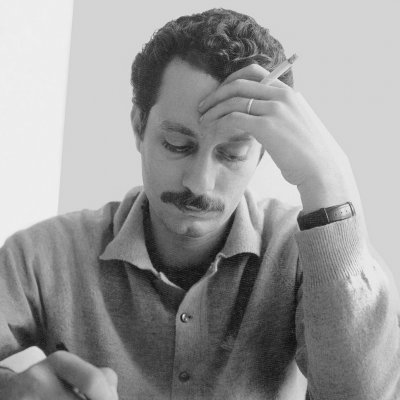 Birth of Ghassan Kanafani in Acre

Led by George Habash, Arab Nationalist Activists on the Way to Structure Their Movement

Kanafani Becomes the Official Spokesman of the PFLP and the Editor of Its Magazine, al-Hadaf

Assassination of Ghassan Kanafani in Beirut

The PLO Posthumously Awards Kanafani the Jerusalem Medal for Culture, Arts and Literature

Ghassan Kanafani was born in Acre. His father was Fayiz Kanafani, a lawyer, and his mother was A’isha al-Salim. He had five brothers, Ghazi, Marwan, Adnan, Numan and Hassan; and two sisters, Fayzah and Suha. He was married to a Danish national, Anni Høver, and they had two children, Fayiz and Laila.

He attended the Collège des Frères in Jaffa. When he was twelve years old, he and his family were forced to leave Jaffa before it fell to the Zionist forces in 1948; they sought refuge in Lebanon. The family then left Lebanon for Syria and settled in Damascus.

In exile, he worked at a printing press; he later distributed newspapers and worked in a restaurant. In the daytime and at night he pursued his studies until he obtained the intermediate school certificate in 1953, and then he worked as an art teacher in UNRWA schools in Damascus.

His contact with Arab political activists who had established the Arab Nationalist Movement began in 1953. After he met George Habash, he began to write for the weekly magazine al-Ra’i.

After obtaining his secondary school certificate, Kanafani joined his sister in Kuwait in 1956 where he worked as an art and athletics teacher. While working as a teacher, he enrolled in the Arabic Department of Damascus University for three years while also being active in Kuwait in the Arab Nationalist Movement and at the Arab Cultural Club, which was dominated by the movement. He also wrote for the weekly magazine al-Fajr, which was published by the movement. In 1957, he published his first story, “A New Sun.”

Kanafani left Kuwait for Beirut in 1960, when the first symptoms of his diabetes were detected. There he joined the editorial board of the magazine al-Hurriyya published by the movement. In 1963 he became editor of the daily al-Muharrir and in charge of its monthly supplement Filastin. In 1967 he became the editor of the weekly supplement of the daily al-Anwar, remaining in that post until 1969.

Kanafani took part in founding the Popular Front for the Liberation of Palestine in December 1967 and was elected to its political bureau. He then became its official spokesman and was in charge of its media activities and in 1969 became editor of al-Hadaf, the movement’s magazine. He remained in that post until his assassination in 1972.

Ghassan Kanafani was a man of great originality and many talents. He wrote short stories, novels, and plays as well as journalistic articles and analytic studies; Arab publishing houses (including Dar al-Tali‘a, Mu’assasat al-Abhath al-‘Arabiyya, and Manshurat al-Rimal) have published editions of his collected works. Many of his works have been translated and published in sixteen languages.

He was also a talented painter. After he was assassinated, some of his novels and stories were turned into feature films or shorts, such as his first novel Men in the Sun, which in 1973 was adapted into a feature film entitled The Deceived. This film was directed by the Egyptian Tawfiq Salih and produced by the General Film Institution in Damascus. The film won the Golden Prize at the Carthage Festival for Arab and African cinema in 1973. Many critics consider this film as one of the most distinguished political films of world cinema, occupying tenth place in the list of the 100 most important movies of Arab cinema since its beginnings. This list was compiled after a survey of hundreds of critics and was announced at the Dubai International Film Festival in 2013.

In 1966, the Friends of the Book Society in Beirut awarded Kanafani its annual prize for his novel All That’s Left to You. He was posthumously awarded the World Union of Democratic Journalists prize in 1974 and the annual Lotus Prize for literature by the Union of Asian and African Writers in 1975. In 1990 the PLO awarded him the Jerusalem Medal for Culture, Arts and Literature.

Kanafani was assassinated in Beirut on 8 July 1972. The Israeli Mossad had placed an explosive charge in his car, which killed him and his niece, Lamis, who happened to be with him. He was buried in Beirut.

Ghassan Kanafani was a political activist who was deeply committed to the cause of Palestine; a man of letters; an accomplished artist; and one of the most prominent Arab novelists and modernist playwrights of the second half of the twentieth century. In his early literary writings Palestine was depicted as a cause in and of itself. Later on he came to see in Palestine a total human symbol whereby his stories and novels dealt not merely with the Palestinians and their problems but also, and through the figure of the Palestinian, the human predicament of agony and deprivation.

[Death of Bed Number 12 and Other Stories]

[A World That Does Not Belong to Us]

[All That’s Left to You]

[The Hat and the Prophet]

[A Bridge to Infinity]

[The Revolution of 1936–39: Background, Details and Analysis]

All That’s Left to You: A Novella and Other Stories. Translated from the Arabic by May Jayyusi and Jeremy Reed. Austin: University of Texas, Center for Middle Eastern Studies, 1990.

Men in the Sun, and Other Palestinian Stories. Translation from the Arabic by Hilary Kilpatrick. London: Heinemann Educational, 1978.