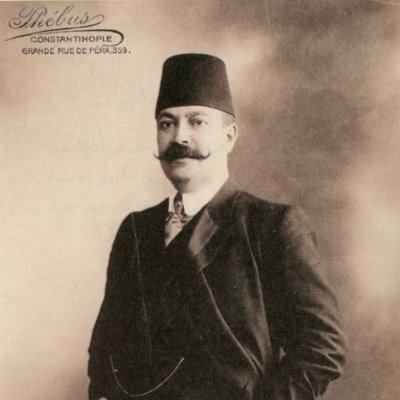 Muhammad Ruhi al-Khalidi was born in 1864 in the Chain Gate quarter (Bab al-Silsila) in the Old City of Jerusalem. This is the traditional family seat right next to the Noble Sanctuary (al-Haram al-Sharif), the Chain Gate being one of the gates of that sanctuary.

His father was Yasin, son of Haj Muhammad Ali al-Khalidi. His wife, Hermance Pinsolle, was French; they had a son, Yahya (also known as Jean).

His biography may be divided into five phases.

Khalidi received his elementary and secondary school education in the traditional elementary school (kuttab) in Jerusalem, the Rushdi School in Nablus, and the National School in Tripoli with Shaykh Hussein al-Jisr as headmaster. He further attended lectures at al-Aqsa Mosque in Jerusalem on a variety of subjects—Arabic language, theology, Hadith, grammar, logic, and eloquence. He attended classes at both the Alliance School and the White Friars (al-Salahiyya), run by the Franciscan order, to perfect his French. He also studied at the Maktam Sultani in Beirut, run by Shaykh Hussein al-Jisr; when the school shut down, he returned to Jerusalem to attend teaching circles in the Aqsa Mosque.

Ruhi’s education involved many institutions in various places because, as a child, he accompanied his father, Yasin, a member of the Ottoman Reform Party who moved from place to place in response to the changing circumstances of his party. Yasin was first elected deputy from Jerusalem in the general provincial assembly (al-Majlis al-umumi) in Beirut, then deputy of Tripoli, then he returned to Jerusalem, and from there was sent as religious judge to Nablus.

Yasin’s brother, Abd al-Rahman al-Khalidi, took his nephew Ruhi with him on a visit to Istanbul in 1880 where he introduced him to the then Shaykh al-Islam Aryani Zadeh Effendi who, wanting to encourage the youthful Ruhi, appointed him to the first rank of teachers called Qudwat al-ulama, in a school in Prusa (Bursa). Ruhi was not yet sixteen years old.

Ruhi returned to Jerusalem where, under pressure from his parents, he accepted a full-time job in the justice department. Because he was their only child, his parents wanted him to be near them, whereas he preferred to continue his education in Istanbul. He soon decided to travel in secret and by sea to Istanbul but was forced to turn back after he had boarded a ship in Jaffa.

While in Jerusalem Ruhi was appointed secretary (bashkatib) of the court in Gaza so took advantage of his travel to his new place of work to fulfill his own wishes. Instead of travelling to Gaza, he was able to go to Istanbul.

Khalidi was admitted to the Royal College (al-Maktab al-malaki) in Istanbul where he remained for six years (1887–93) and earned the Higher Diploma. He returned to Jerusalem where he was appointed a teacher in a high school (al-Maktab al-idadi); he considered himself worthy of a higher position and returned to Istanbul, where he applied for an appointment as district commissioner (qa’im maqam). Growing impatient as he waited for the order to be issued, he travelled to Paris, not knowing a soul there, and then returned to Istanbul where he attended the teaching circle of Jamal al-Din al-Afghani. Afghani was then under strict surveillance by the Ottoman security forces. When the scope of surveillance widened to include Khalidi himself, he abandoned the Ottoman Empire and returned to Paris. He enrolled at the École libre des sciences politiques in Paris where he finished his course of studies in three years and then attended the Sorbonne, where he studied the philosophy of Islamic sciences, oriental literatures and political history. Among his most distinguished teachers were Albert Fernandel; the “dean” of political history, Albert Sorel; the minister of public education, Alfred Rambaud; the Orientalist Hartwig Derenbourg; and the statistician Émile Levasseur.

At the end of his study at the Sorbonne, Khalidi was appointed lecturer at the École spéciale des Langues orientales in Paris and began to deliver lectures in Arabic attended by prominent orientalists. He was perhaps the first Arab to do so. In 1897 he participated in the Congress of Orientalists held in Paris with a paper on statistics from the Islamic world. At that time he was in constant communication with some of the major reformers in the Arab world, especially Shaykh Muhammad Abdu.

When Khalidi returned to Istanbul in 1898, a royal decree was issued appointing him Consul-General of the Ottoman Empire in the city of Bordeaux and its environs. The French government welcomed his appointment. He was to remain in this post for about ten years during which he was very successful and his reputation grew. He was elected doyen of the city’s Consular Corps, which numbered 46 consuls, and he would represent them at celebrations where they could not all be present, and in that capacity he received the president of the republic, ministers, and scholars when they visited Bordeaux.

During his Bordeaux years Khalidi wrote a series of articles and scholarly papers, which were published in newspapers and journals in the Arab world such as Al-Ahram, Al-Mu’ayyad, Tarabulus al-Sham, Al-Hilal, and Al-Manar. His articles dealt with a wide variety of subjects, as shown by article titles: “An Essay on the Causes of the Rapid Spread of the Muhammadan Religion,” “The Eastern Question,” “Arab Chemistry,” “The Wisdom of History,” and “Victor Hugo and the Science of Literature among Europeans and Arabs.”  Khalidi took care not to reveal his name, fearing the reaction of the Ottoman authorities. He would sign his articles with pseudonyms like “The Jerusalemite,” the name by which his readers came to know him. To quote the publisher of Al-Hilal, Jurji Zaidan, “ His readers were greatly impressed with his learning and integrity and would ask us to reveal his real name but he would not allow us to reveal it.”  Zaidan adds that his scholarly output was “of exceptional quality, indicating wide learning, perspicacity, integrity in scholarship, a moderate tone and aversion to personal prejudice.”

When, in 1907, the International Maritime Fair was organized in Bordeaux to mark the centenary of steam-powered ships, the Municipality of Bordeaux presented him with a beautiful souvenir. The French government awarded him the medals of the Ordre des palmes académiques and the Légion d’honneur.

Fifth Phase, 1908-13: Parliamentary and Political Activity and Opposition to Zionism

Following the restoration of the Ottoman constitution in July 1908, Khalidi returned to Jerusalem, and four months later, Jerusalem residents elected him as their deputy to the Ottoman parliament (mab‘uthan). Khalidi had joined the Committee of Union and Progress and was an advocate of liberty, constitutionalism, and liberalism in his thinking. In this he was following in the footsteps of his uncle, Yusuf Dia al-Din Pasha al-Khalidi (d. 1906), whom he greatly admired.

The people of Jerusalem re-elected him to the Ottoman Parliament in 1912. He was one of its most prominent members and was elected deputy speaker of parliament.

From early days Khalidi was very alert to the dangers that Zionism represented to his homeland. Here too he followed in the footsteps of his uncle Yusuf Dia who also recognized that danger. He warned that Zionist activity and intensive settlement would inevitably lead to the expulsion of the Arab natives from their ancestral homeland. He addressed himself directly to the Zionists, writing the following in their Hebrew language paper Ha-Zvi: “We owe you nothing. We captured this land from the Byzantines and not from you.” Ruhi raised this issue several times at parliamentary sessions, warning against the continuing sale of lands and against Zionist immigration. While still in Bordeaux he began a study of Zionism and its Jewish religious roots and followed this up with visits to the Jewish colonies spread throughout Palestine, perhaps the first Arab to do so.  In that study (“Zionism or the Zionist Question”), he cited statistics and details regarding Zionist institutions and parties.

Khalidi died on 6 August 1913, four days after having contracted typhoid fever. He was not yet fifty years old.

Ruhi al-Khalidi was one of Palestine’s most notable and brilliant figures of the early twentieth century. Particularly noteworthy was his international diplomatic, political, constitutional, and liberal activity, his many-faceted scholarly output and his pioneering studies in history and comparative literature, in addition to his firm attachment to Ottomanism and his early awareness of the dangers of Zionism and the extent of its motives.

[Introduction to the Eastern Question]

[History of Literature in Europe and among the Arabs]

[Chemistry among the Arabs]

[A Journey to al-Andalus]

[The Science of Linguistics]

[Zionism, or the Zionist Question]

Mandel, Neville. The Arabs and Zionism before World War I. Berkeley: University of California Press, 1976.