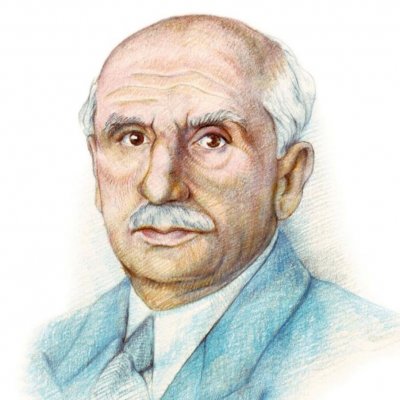 Bustani was born in the village of Dibbieh, in the district of Chouf, in Lebanon. He and his wife, Rose Dimitri, had three sons—Fuad, Nu`man, and Fayiz—and one daughter, Laila.

He completed his primary education in his native village and then moved to the Suq al-Gharb School. From there, he enrolled in the American University of Beirut where, in 1907, he obtained a BA degree in art and science.

Following his graduation, Bustani worked for two years as a teacher of Arabic at the American University.  In late 1909 he was appointed interpreter and agent of the British Consulate in the port of Hodeida in Yemen.

Bustani soon resigned and moved to Cairo where he worked as a secretary in the Ministry of Public Works and began translating English poetry into Arabic. In Cairo he met Egypt’s most prominent poets: Ahmad Shawqi, Hafiz Ibrahim, and Khalil al-Mutran.

In 1912, Bustani travelled to India where he remained for two years, during which he met the great Indian poet Rabindranath Tagore and translated some of his poetry into Arabic.

Conditions during World War I forced him to move from one African country to another until he ended up in Johannesburg in South Africa, where he remained for two years.

In 1916, Bustani returned to Cairo and held several posts in the Ministry of the Interior. In 1918, he arrived in Palestine and was appointed adviser to the British military governor.

While in his public post he opposed Zionism and then resigned in 1920.  The British authorities exiled him to Bir al-Sabi' for having taken part in the general strike that broke out in Jerusalem that year.

Bustani participated in founding a number of Muslim-Christian associations, these being in their organizational structure the earliest expression of the Palestinian national movement that opposed Britain’s pro-Zionist policies. He was then elected a member of the Sixth Palestinian National Congress held in Jaffa in June 1923 and was a member of the Palestinian Arab delegation that travelled to London to negotiate with the British a solution to the Palestine problem.

Bustani was deeply concerned with strengthening national unity and called for unity between Arab Muslims and Christians. He composed several odes for the Prophet’s birthday celebrations and defended Arab peasants who were trying to prevent their lands from being passed on to Zionist organizations.

Having obtained a diploma in law from the Jerusalem Law Classes in 1929, Bustani began to practice law.

In 1936 Bustani supported the General Strike and armed rebellion and in 1937 took part in the deliberations of the Arab National Conference held in the Syrian town of Bludan. However, he soon decided to abandon politics and to concentrate on translating into Arabic the classics of ancient Indian literature done from English translations of these classics.

In 1948, Bustani and his wife refused to leave their house in Haifa, now occupied by the Jewish Haganah forces. These forces then proceeded to lodge by force a number of Jewish families in the apartments of the building he himself had built. He was placed under surveillance and was under house arrest for a long time.

By 1953, Bustani could no longer bear the new situation that had befallen him and his people following the establishment of Israel, and he left for Lebanon.

In 1953, Bustani was honored at a ceremony in the UNESCO building in Beirut on the occasion of the publication of his translation of the Mahabharata, the celebrated Indian literary classic. The then President of Lebanon, Camille Chamoun, presented him with the Golden Medal of Merit.

He died in Lebanon in 1954 and was buried in his family burial ground in Dibbieh.

Wadi‘ al-Bustani was a man of letters, a poet, a journalist, and a translator of the first rank. He was high-minded in character, a man of great dignity, and a strong defender of the Arab rights in Palestine.

[The British Mandate is Wrong and Impossible; Arguments and Documents regarding a Solution of the Palestine Problem]

[A Collection of Poetry on Palestine]

[The Indian Mahabharata; the Greatest of World Epics]