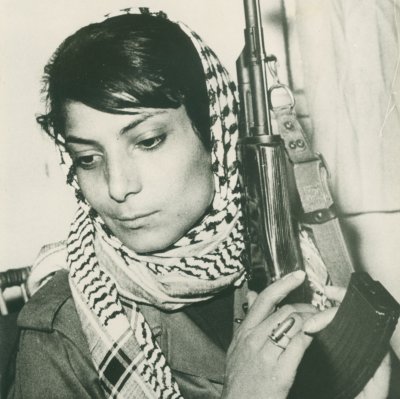 Birth of Leila Khaled in Haifa

The Battle for Haifa and Its Surroundings

Civil Aviation in the Conflict

Agreement on Withdrawal Reached and Implemented

Leila Khaled Is Elected Member of the PFLP Political Bureau

Leila Khaled was born in Haifa. Her father, Ali Khaled, and her mother, Jamila Lattuf, had seven girls and five boys. She and her husband, Fayiz Rashid, had two sons, Bader and Bashar.

Her family was forced to leave Haifa after the city fell to Zionist forces in April 1948, when she was barely four years old. The family settled in the Lebanese city of Tyre.

She studied at the Evangelical Union Schools in Tyre and completed her secondary education at the Sidon Girls School.

In 1959 she joined the Arab Nationalist Movement and in 1963 she enrolled at the American University of Beirut and was elected a member of the administrative committee of the General Union of Palestinian Students in Beirut. She had to leave the university after one year because her family could not afford to pay her university fees.

Between 1963 and 1969, she worked as an English teacher in government schools in Kuwait. She had joined the Popular Front for the Liberation of Palestine (PFLP) as soon as it was founded in December 1967.

From 1969 to 1972, Khaled took part in foreign military operations of the PFLP, which were organized by Dr. Wadi Haddad.

On 29 August 1969 she and her comrade Salim Isawi hijacked a TWA airliner; they were imprisoned in Syria for a month and a half and then released. On 6 September 1970, she was one of the hijackers of an Israeli El Al airliner and was detained for a month in Britain when the pilot landed in London. An Argentinian comrade, Patrick Arguello, was killed aboard the plane by Israeli security guards.

Between 1973 and 1977, Leila Khaled joined the Palestinian resistance in Lebanon, working either as an official of the PFLP or as a member of the Secretariat of the General Union of Palestinian Women. She was also actively involved in the assistance to the displaced and the wounded following Israeli attacks on the Palestinian refugee camps.

She had been elected a member of the Secretariat of the Women’s Union at the second conference of that union in 1974. As a union activist, she took part in several international, regional, and local conferences and in many workshops devoted to women’s affairs; she also helped to establish (in 1978) the House of the Children of Resilience to care for children of the martyrs of Tal al-Za‘atar refugee camp north of Beirut when it fell to right-wing forces during the Lebanese civil war. This facility exists to the present day.

Between 1978 and 1980, Leila Khaled studied at the universities of Moscow and Rostov but cut short her studies when the PLO summoned all university students studying abroad to help defend the Palestinian revolution. During the Israeli invasion of Lebanon in the summer of 1982, she worked (through the General Union of Palestinian Women) to find shelter for the displaced and tend to the wounded in hospitals.

After the exodus from Lebanon in 1982, the PFLP was reorganized, and Khaled occupied various administrative and leadership positions.

In 1986 the Palestine Women Organization was established to serve as a general framework for the PFLP, and Leila Khaled was elected first secretary. The organization worked to mobilize women to defend their rights and the rights of the Palestinian people through specially prepared programs and plans, and came to have branches in a number of Arab countries and abroad. The organization published a magazine, The Woman’s Voice, which she edited.

In 1992, she and her family moved to Amman, where she currently resides.

Inspired by her personal experiences of forced exile from her hometown and the suffering of her kin and nation, Leila Khaled took the struggle of Palestinian women into new and unprecedented directions.  She has made notable contributions in social, humanitarian, and political areas, in the service of her cause, and in defense of basic human rights.

Khaled, Leila and George Hajjar. My People Shall Live: Autobiography of a Revolutionary. Toronto: NC Press, 1975.