Resolute throughout that history, the Palestinian Arab people forged its national identity, rising even to unimagined levels in its defense, as invasion, the design of others, and the appeal special to Palestine’s ancient and luminous place on that eminence where powers and civilizations are joined ... All this intervened thereby to deprive the people of its political independence. Yet the undying connection between Palestine and its people secured for the land its character, and for the people its national genius.

Nourished by an unfolding series of civilizations and cultures, inspired by a heritage rich in variety and kind, the Palestinian Arab people added to its stature by consolidating a union between itself and its patrimonial Land. The call went out from Temple, Church and Mosque to praise the Creator, to celebrate compassion, and peace was indeed the message of Palestine. And in generation after generation, the Palestinian Arab people gave of itself unsparingly in the valiant battle for liberation and homeland. For what has been the unbroken chain of our people’s rebellions but the heroic embodiment of our will for national independence? And so the people was sustained in the struggle to stay and lo prevail.

When in the course of modern times a new order of values was declared with norms and values fair for all, it was the Palestinian Arab people that had been excluded from the destiny of all other peoples by a hostile array of local and foreign powers. Yet again had unaided justice been revealed as insufficient to drive the world’s history along its preferred course.

And it was the Palestinian people, already wounded in its body, that was submitted to yet another type of occupation over which floated the falsehood that "Palestine was a land without people.’’ This notion was foisted upon some in the world, whereas in Article 22 of the Covenant of the League of Nations (1919) and in the Treaty of Lausanne (1923), the community of nations had recognized that all the Arab territories, including Palestine, of the formerly Ottoman provinces, were to have granted to them their freedom as provisionally independent nations.

Despite the historical injustice inflicted on the Palestinian Arab people resulting in their dispersion and depriving them of their right to self-determination, following upon UN General Assembly Resolution 181 (1947), which partitioned Palestine into two states, one Arab, one Jewish, yet it is this resolution that still provides those conditions of international legitimacy that ensure the right of the Palestinian Arab people to sovereignty and national independence.

By stages, the occupation of Palestine and parts of other Arab territories by Israeli forces, the willed dispossession and expulsion from their ancestral homes of the majority of Palestine’s civilian inhabitants, was achieved by organized terror; those Palestinians who remained, as a vestige subjugated in its homeland, were persecuted and forced to endure the destruction of their national life.

Thus were principles of international legitimacy violated. Thus were the Charter of the United Nations and its Resolutions disfigured, for they had recognized the Palestinian Arab people’s national rights, including the right of return, the right to independence, the right to sovereignty over territory and homeland.

In Palestine and on its perimeters, in exile distant and near, the Palestinian Arab people never faltered and never abandoned its conviction in its rights of Return and independence. Occupation, massacres and dispersion achieved no gain in the unabated Palestinian consciousness of self and political identity, as Palestinians went forward with their destiny, undeterred and unbowed. And from out of the long years of trial in ever mounting struggle, the Palestinian political identity emerged further consolidated and confirmed. And the collective Palestinian national will forged for itself a political embodiment, the Palestine Liberation Organization, its sole, legitimate representative recognized by the world community as a whole, as well as by related regional and international institutions. Standing on the very rock of conviction in the Palestinian people’s inalienable rights, and on the ground of Arab national consensus and of international legitimacy, the PLO led the campaigns of its great people, molded into unity and powerful resolve, one and indivisible in its triumphs, even as it suffered massacres and confinement within and without its home. And so Palestinian resistance was clarified and raised into the forefront of Arab and world awareness, as the struggle of the Palestinian Arab people achieved unique prominence among the world’s liberation movements in the modern era.

The massive national uprising, the intifada, now intensifying in cumulative scope and power on occupied Palestinian territories, as well as the unflinching resistance of the refugee camps outside the homeland, have elevated awareness of the Palestinian truth and right into still higher realms of comprehension and actuality. Now at least the curtain has been dropped around a whole epoch of prevarication and negation. The intifada has set siege to the mind of official Israel, which has for too long relied exclusively upon myth and terror to deny Palestinian existence altogether. Because of the intifada and its revolutionary irreversible impulse, the history of Palestine has therefore arrived at a decisive juncture.

Whereas the Palestinian people reaffirms most definitively its inalienable rights in the land of its patrimony:

Now by virtue of natural, historical and legal rights, and the sacrifices of successive generations who gave of themselves in defense of the freedom and independence of their homeland;

In pursuance of Resolutions adopted by Arab summit conferences and relying on the authority bestowed by international legitimacy as embodied in the resolutions of the United Nations Organization since 1947;

And in exercise by the Palestinian Arab people of its rights to self-determination, political independence and sovereignty over its territory;

The State of Palestine is the state of Palestinians wherever they may be. The state is for them to enjoy in it their collective national and cultural identity, theirs to pursue in it a complete equality of rights. In it will be safeguarded their political and religious convictions and their human dignity by means of a parliamentary democratic system of governance, itself based on freedom of expression and the freedom to form parties. The rights of minorities will duly be respected by the majority, as minorities must abide by decisions of the majority. Governance will be based on principles of social justice, equality and nondiscrimination in public rights on grounds of race, religion, color or sex, under the aegis of a constitution which ensures the rule of law and an independent judiciary. Thus shall these principles allow no departure from Palestine’s age-old spiritual and civilizational heritage of tolerance and religious coexistence.

The State of Palestine is an Arab state, an integral and indivisible part of the Arab nation, at one with that nation in heritage and civilization, with it also in its aspiration for liberation, progress, democracy and unity. The State of Palestine affirms its obligation to abide by the Charter of the League of Arab States, whereby the coordination of the Arab states with each other shall be strengthened. It calls upon Arab compatriots to consolidate and enhance the emergence in reality of our state, to mobilize potential, and to intensify efforts whose goal is to and Israeli occupation.

It further announces itself to be a peace-loving state, in adherence to the principles of peaceful co-existence. It will join with all states and peoples in order to assure a permanent peace based upon justice and the respect of rights so that humanity’s potential for well-being may be assured, an earnest competition for excellence be maintained, and in which confidence in the future will eliminate fear for those who are just and for whom justice is the only recourse.

In the context of its struggle for peace in the land of love and peace, the State of Palestine calls upon the United Nations to bear special responsibility for the Palestinian Arab people and its homeland. It calls upon all peace- and freedom-loving peoples and states to assist it in the attainment of its objectives, to provide it with security, to alleviate the tragedy of its people, and to help it terminate Israel’s occupation of the Palestinian territories.

Therefore, on this day unlike all others, 15 November, 1988, as we stand at the threshold of a new dawn, in all honor and modesty we humbly bow to the sacred spirits of our fallen ones, Palestinian and Arab, by the purity of whose sacrifice for the homeland our sky has been illuminated and our land given life. Our hearts are lifted up and irradiated by the light emanating from the much blessed intifada, from those who have endured and have fought the fight of the camps, of dispersion, of exile, from those who have borne the standard of freedom, our children, our aged, our youth, our prisoners, detainees, and wounded, all those whose ties to our sacred soil are confirmed in camp, village and town. We render special tribute to that brave Palestinian woman, guardian of sustenance and life, keeper of our people’s perennial flame. To the souls of our sainted martyrs, to the whole of our Palestinian Arab people, to all free and honorable peoples everywhere, we pledge that our struggle shall be continued until the occupation ends, and the foundation of our sovereignty and independence shall be fortified accordingly.

Therefore, we call upon our great people to rally to the banner of Palestine, to cherish and defend it, so that it may forever be the symbol of our freedom and dignity in that homeland, which is a homeland for the free, now and always.

In the name of God, the Compassionate, the Merciful.

From the Limelight to the Backstage 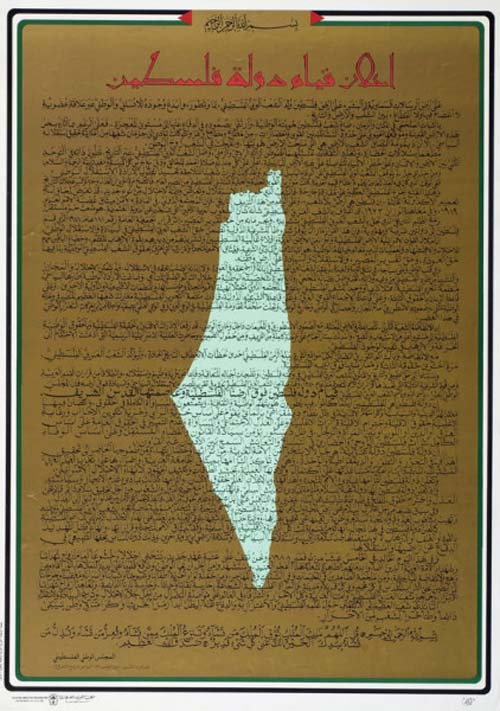