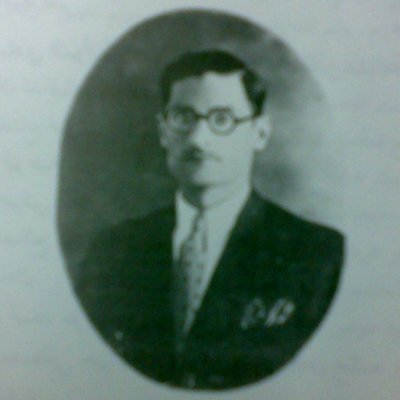 The Federation of Arab Trade Unions and Labor Societies Is Founded

The Palestine Arab Workers' Society Conference Is Held in Jaffa. Hamran Is Elected Chairman of the Society

The Palestine Arab Workers' Society, Led by Hamran, and the Federation of Arab Trade Unions and Labor Societies Disagree about Who Would Represent the Arab Labor Movement in Palestine at the World Trade Union Conference

Arab Workers’ Congress Attends the Second Stage of the World Trade Union Conference in Paris. Hamran Is Given Observer Status

Sami Taha Hamran was born in the village of Arraba (Jenin district) into a poor and rural family. He attended the village school and completed the fifth grade. Then his father died, and he had to leave school to support his family.

He headed to Haifa to seek work, and thanks to Rashid al-Haj Ibrahim, he was hired in a lowly position in the Arab Chamber of Commerce. He then moved to the Palestine Arab Workers’ Society in Haifa to work as a clerk and at a very modest salary. But fate decreed that this society would become his home and the scene of his professional accomplishments in his short but rich life.

As soon as he began his new job, Hamran started to study the history of local and international labor conditions. At the same time he devoted himself to self-education; he studied English until he became fluent in the language and then assumed one position after another in the society, under the guidance of its president, Abd al-Hamid Haimur.

The Palestine Arab Workers’ Society was the first and oldest Arab labor union in Palestine under the British Mandate. It began in Haifa in 1923, among Arab railway workers led by Haimur. From its earliest days the society faced vigorous opposition from both the large Zionist labor organization (the Histadrut) as well as the Mandate authorities. The Mandate recognized the society only in March 1925, two years after its foundation. Once recognized, the society under Haimur and his comrades began to grow in membership and to set up branches in one town after another, the most important being the Haifa and Jaffa branches. In the twenties and early thirties the society confined its activities to labor affairs and internal organization, holding conferences and negotiating with employers in the public and private sectors. However, during the 1936 General Strike, the society was very active, establishing committees to organize communities and furnish aid. Hamran represented the Society in the National Committee that ran the strike; at that time, he was only twenty-five years old.

In the years following the Great Palestinian Rebellion of 1936–39, the Arab labor movement was generally weak, a consequence of severe British repression. But the workers society became active when World War II began in 1939, and Hamran played a considerable role in this renewed activity during the five years of the war. During these years, Palestine witnessed an industrial and economic revival that was unprecedented, a result of the growth of new local industries under the supervision of the British to supply the needs of their armies in Egypt’s western desert, as they faced the German advance on Egypt. This affected the status of the Arab labor union movement, the most prominent result being the large increase of Arab workers employed in military facilities and British army camps.

Among the most telling signs of the growth of the Arab labor movement and the growing influence of Hamran within that movement is what happened at the Jaffa conference in 1943. In early April 1943, a conference was held in Jaffa attended by delegates of Arab workers in British army camps, estimated at that time to be about 28,000. Hamran was elected chairman. The Histadrut had called for a general strike of all the workers in Palestine but Hamran convinced the delegates not to fall in with the plans of the Histadrut and succeeded in asserting the independence of the Arab labor movement; after that conference he emerged as one of its most prominent leaders.

His star continued to rise in Arab labor union circles, first locally and then internationally. This was especially the case in 1946 and 1947; the period following the end of the war coincided with the entry of the labor union movement directly into the highest levels of the political sphere in Palestine, under Hamran’s leadership. This was a unique development. No labor union movement in any Arab country in the Arab east had ever succeeded in participating in the political leadership of its country.

The path ahead was not easy for Hamran. In his labor union work, he was forced to clash with the Arab communist circles whose activity increased enormously in the world as a result of the decisive role played by the Soviet Union in defeating Nazi Germany in the war just ended. Arab communists who were members of the Palestine Arab Workers’ Society in Palestine established in 1942 the Federation of Arab Trade Unions and Labor Societies. (This was followed in 1943 by a split within the Palestine Communist Party when Arab members broke away from the party’s Jewish majority, and set up the National Liberation League.) The number of the Federation members was not large when compared to the members of the society, but its influence outside Haifa and especially in the society’s branches in Jaffa, Jerusalem and Gaza was considerable because of the wide distribution of union’s newspaper, also called al-Ittihad.

At first the federation took care to maintain cordial relations with the society. But these soon deteriorated following a sharp disagreement in early 1945 between the society led by Hamran on one side, and the federation, and the league on the other side. That disagreement was apparently over who was to represent the Arab labor movement in Palestine at the World Trade Union Conference to be convened soon in two stages: a preliminary stage in London in February 1945 and a second stage in Paris in September of the same year. As regards the first London conference, Taha prevailed; he represented the society as an official delegate, whereas the federation was given an observer status only.

In response, supporters of the federation walked out from the society in Jaffa, Jerusalem, and Gaza and held a conference in Jaffa on 19 August where they announced the creation of a new organization, entitled the Arab Workers’ Congress and the dissolution of the federation. Thanks to the support of communist parties, representatives of the congress were accorded official delegate seats at the Paris conference at the expense of the society whose representatives under Sami Taha’s leadership were granted an observer status only.

Following the “Battle of the Delegations,” Hamran worked tirelessly to develop and expand the society. He succeeded in reorganizing the branches that had witnessed withdrawals of members, in founding cooperatives for both producers and consumers in the labor and agricultural fields, and in founding savings banks and other credit banks for investment. He demonstrated the organizational power of the society when it declared a general strike in April 1946, to protest the Mandate Department of Telegraphs and Posts’ refusal to recognize the society as representing Arab workers. The strike disrupted communications between the country and the outside world.

The entry of the society into the political field took place on 20 August 1946, at a general conference held in Haifa and attended by delegates representing forty-two branches and trade unions elected by an estimated 80,000 members. The conference was chaired by the founder of the Arab labor movement, Abd al-Hamid Haimur, and Hamran was elected secretary general. The conference amended the bylaws of the society, whereby the latter became the Trade Unions’ Council. It adopted a number of resolutions, which reflected the society’s social and economic philosophy and its political, national, and international orientations, in conformity with Hamran’s socialist views and thinking. The conference considered the trade union movement as the “mother” and the political movement issuing from it as its “branch” and tool. It affirmed that the political leadership that issued from the trade union “mother” should remain in labor hands in order to prevent “opportunism” and to ward off the political petite bourgeoisie dominant in certain Arab countries. As regards relations with the outside world, the trade union movement was defined as a “national conglomeration” which contributes to the “international humanist movement, provided it retains its national independence and identity.”

These resolutions drew public attention, and Hamran’s name became well known to the general public. Thus, it was not surprising that the Arab Higher Committee would agree to Taha’s participation in the Palestinian negotiating delegation that travelled to London to attend the Round Table Conference convened by the British government in January 1947, with the aim of narrowing the differences between the Arab and Zionist sides. The participation of a trade union leader at such a high political level was unprecedented in Arab politics.

The London conference did not lead to any result, so Britain decided to refer the matter to the General Assembly of the United Nations. In May 1947, the General Assembly appointed a fact-finding mission, the UN Special Committee on Palestine (UNSCOP). When the latter arrived in Palestine in June 1947, the Arab Higher Committee decided to boycott its sessions in protest against its formation, since Palestine had already received since 1919 ten fact-finding committees before UNSCOP, none of which had produced results. However, the Trade Unions’ Council (which had issued from the Haifa labor conference of August 1946) headed by Hamran decided that the national interest required that UNSCOP should be met, thus putting the Council at odds, for the first time publicly, with the Arab Higher Committee, the highest Arab political authority in the country.

The second clash was sparked off by a cable sent to the UN Secretary General by a conference of the Trade Unions’ Council held in Haifa on 18 August 1947 “on behalf of one hundred and twenty thousand workers, each of whom speaks in the name of five family members.” The cable rejected partition decisively and called for independence and self-determination. As for the Jews of the country, the conference considered that “the Arab Jews who lived in the country before 1918 (i.e. before the Balfour Declaration and the British occupation) and their descendants … are our brothers and fellow citizens with the same rights and obligations as us. Anyone who arrived in our homeland without the agreement of its people should be evacuated.”

The Arab Higher Committee considered that this direct contact between the Council and the UN was a violation of its own prerogatives and its internationally recognized representative character. Its press focused on that part of the cable, which dealt with the Jews of the country considering it to be an abandonment of national rights. Some accused Hamran of even more grievous things although the text in the cable regarding the Jews was in full agreement with the declared views of some prominent members of the AHC itself. On the night of 11 September 1947, an unknown assassin shot Sami Taha Hamran dead in Haifa. The country witnessed a great wave of sorrow and anger and his funeral was attended by thousands. He was buried in the town of Balad al-Shaykh, near Haifa.

The assassin’s identity is still unknown, although accusing fingers have pointed to more than one party. What is beyond dispute is that the Arab labor union movement and the whole of Palestine suffered, through his death and while still only 36 years old, a grievous loss. With his death, Palestine lost a brilliant trade unionist full of energy and promise and capable of many more achievements.

A Survey of Palestine. vols. 1–2 and Supplement (Government of Palestine, Jerusalem, 1946–1947) reprinted by the Institute for Palestine Studies, Washington DC, 1991.

A Dynamic Movement Ripped Apart by the Nakba