The village stood on flat terrain on the central coastal plain, connected by highways to Jaffa, Lydda, and Ramla. The Jaffa–Lydda railway passed immediately south of the village, and Lydda airport lay 4 km to the south. The village was called Yehud in the Old Testament (Joshua 19:45) it was one of the towns controlled by the tribe of Dan and was known during Roman times as Iudaea. In the post-Roman period it was called al-Yahudiyya. In 1596 it was a village in the nahiya of Ramla (liwa' of Gaza) with a population of 693. It paid taxes on a number of crops, including wheat, barley, fruit, and sesame, as well as on other types of property, such as goats and beehives.

The Syrian Sufi traveller al-Bakri al-Siddiqi, who toured the region in the mid-eighteenth century, reported that he visited the shrine of al-Nabi Huda there and stayed in the village at the invitation of a friend.

In the late nineteenth century, the village had a population of between 800 and 1,000. It was built of adobe brick and surrounded by palm trees. The village's water supply came from a nearby pond.

In 1932 the residents renamed it al-Abbasiyya. This was primarily in memory of a Shaykh al-Abbas, who was buried there, but was also an allusion to the Abbasid ('Abbasi) Arab-Muslim empire. With the exception of twenty Christian residents, the village population at that time was Muslim. AI-Abbasiyya had two mosques: a large one built of stone with a 21-m-high minaret (which was initially at the center of the village) and a smaller one in the northwest.

AI-Abbasiyya had two schools, one for boys and another for girls. The boys' school was established in 1919 and became a junior high school in 1941, with 14 teachers and an enrollment of 293 students at that time. This rendered it the largest among the sub-disctrict's village schools. Attached to it were 27 dunums of land for agricultural training. The girls' school was opened in 1943 with an initial enrollment of 101 students. The villagers also formed a social-cultural club, al-Nadi al- Abbasi, which sponsored a library and a soccer team. In addition, some villagers held government-appointed positions on a local council, which was founded in 1945 and was entrusted with improving social services and paving the roads.

The people of al-Abbasiyya earned their living primarily from agriculture and from plaiting mats, made from papyrus brought from the marshlands of Lake al-Hula. During World War II they began raising Holstein cows. In 1944/45 a total of 3,879 dunums was devoted to citrus and bananas and 12,348 dunums were allotted to cereals; 1,019 dunums were irrigated or used for orchards. Water for irrigation was drawn from numerous artesian wells. People from neighboring villages sought the weekly Saturday market in al-Abbasiyya, where they bought and sold agricultural products, animals, and textiles.

An attack was carried out on the village by the Irgun Zvai Leumi (IZL) on 13 December 1947 (the Jewish holy day of Chanukka). The History of the Haganah reports that the Irgun, acting in conjunction with a number of simultaneous raids on towns and villages across the country, infiltrated the village in four vehicles, set off explosive charges near several of the houses, and left. The New York Times put the number of dead at seven, with seven others seriously wounded, two of whom died later (a five-year-old child and a twenty-year old woman). Five other casualties were reported in subsequent days. The report said that the twenty-four attackers were disguised as British soldiers, adding that they 'shot up Yehudiya, blew up a number of houses and threw hand grenades into others.' The Times correspondent also wrote that 'one group opened fire on villagers sitting outside a cafe while the rest of the invaders put time bombs against houses and threw grenades to discourage interference.' The Palestinian newspaper Filastin said that the attackers had left a booby-trapped car in the village which exploded and caused some of the casualties. According to the newspaper account, British troops arrived at the scene while the attack was in progress but failed to intervene. They only partially encircled the village, leaving the attackers with an escape route on the north side of al-Abbasiyya. Another Zionist force struck at the village on 24 February, according to an official British communiqué quoted by Filastin. Two villagers were killed when a car belonging to the Jewish Settlement Police sped through the village and hurled a grenade at passers-by.

In late April the Haganah began Operation Hametz , which was designed to occupy a number of villages to the south and east of Jaffa, thus isolating the city and facilitating its conquest. Irgun forces also organized a frontal attack of Jaffa that began on 25 April 1948. Four days later, when Operation Hametz was carried out, the Haganah's Alexandroni Brigade took control of the region around al-Abbasiyya. The village itself was occupied by the Irgun on 4 May as part of the general Haganah plan to expel Palestinian villagers from the coastal area between Tel Aviv and the Jewish settlement of Zikhron Ya'aqov, south of Haifa (see Khirbat al-Shuna, Haifa sub-disctrict). A New York Times story said that the attack began on the night of 3 May and that its first phase was over by 6:00 a.m. the following morning. AI-Abbasiyya was held by Irgun forces for five weeks, according to the History of the Haganah. The IZL units were forced to withdraw from the village after an Arab counterattack on the eve of the first truce of the war (11 June). It was then attacked again by Israeli forces in Kafr 'Ana, and the battles around the village continued 'spasmodically' for a couple of days into the truce, according to the Times correspondent. The village then remained in Arab hands for about a month. When the truce expired, it was recaptured during Operation Dani, along with a cluster of villages east of Jaffa. This occurred on 10 July, during an attack by units of the Israeli Home Guard. According to the History of the Haganah, the village fell 'practically without any fighting.' Half a dozen neighboring villages were taken in the same offensive, which a Times report described as an 'enveloping action' coordinated with the attack against Ramla and Lydda. The village's inhabitants were probably expelled during the 3 May attack.

On 13 September 1948 Prime Minister Ben-Gurion asked for the Israeli cabinet's permission to destroy this village. Under a newly passed regulation, the Ministerial Committee for Abandoned Property had to approve requests made for the destruction of villages. The request was made in the name of the commander of the Central Front, General Zvi Ayalon, on the grounds that there was insufficient manpower to completely occupy the area. Israeli historian Benny Morris describes this sequence, but does not clarify whether the request was implemented in full. Indirect evidence indicates that it was not, for a recommendation was made ten days later by the Israeli Military Government to settle Jewish immigrants in the village, probably in the houses that were still standing.

The settlement of Yehud was established on the village site in 1948. [M:xx, 165, 193–94) One year later, the settlement of Magshimim was built to the east of the site, and Ganne Yehuda, Ganne Tiqwq, and Savyon were built in 1951, 1953, and 1954, respectively. Like Ben-Gurion airport, these settlements were established on lands belonging to al-Abbasiyya.

The main mosque and the shrine of al-Nabi Huda still stand. The mosque is deserted and beginning to crack in several places; the shrine is made of stone and surmounted with a dome. There is also an Israeli coffee shop, called the "Tehr" coffeeshop, at the entrance of a main street that was called Ziqaq aI-RamI ("Sand Lane"). A number of houses remain; they have been occupied by Yehud's Jewish residents or put to other uses. One residential house, made of concrete, has a slanted roof and rectangular doors and windows; its porch is covered by corrugated metal sheets. Another house, a two-storey, concrete structure with rectangular doors and windows and a tiled, tent-shaped roof, has been converted into a commercial building. The land around the site (only partially covered by construction) has been left untended and is overgrown with pine and Christ's-thorn trees. 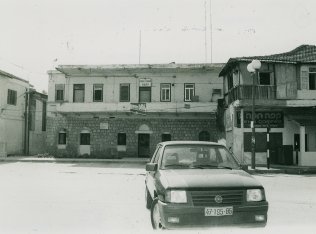 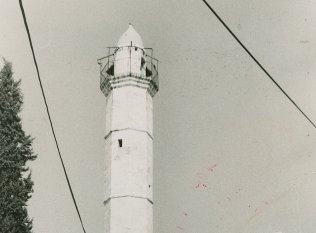 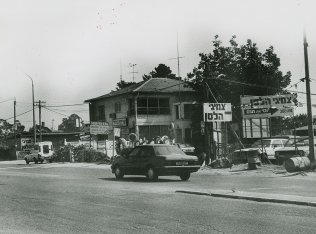 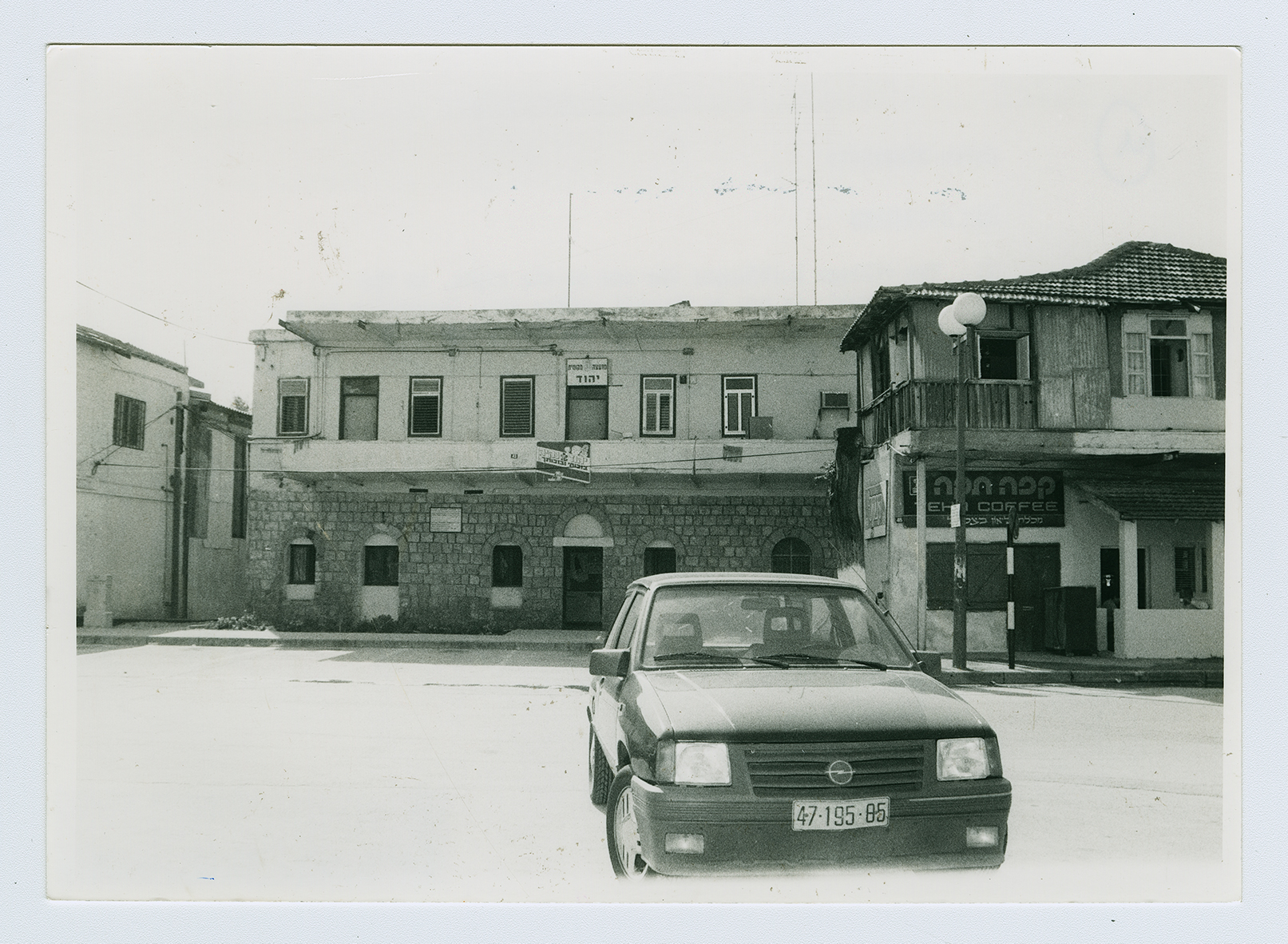 Two village buildings; the one on the right, in the foreground, is now an Israeli coffee shop (according to the sign, the "Tehr Coffee Shop''), while the one in the background houses the offices of the Israeli municipality of Yehud. 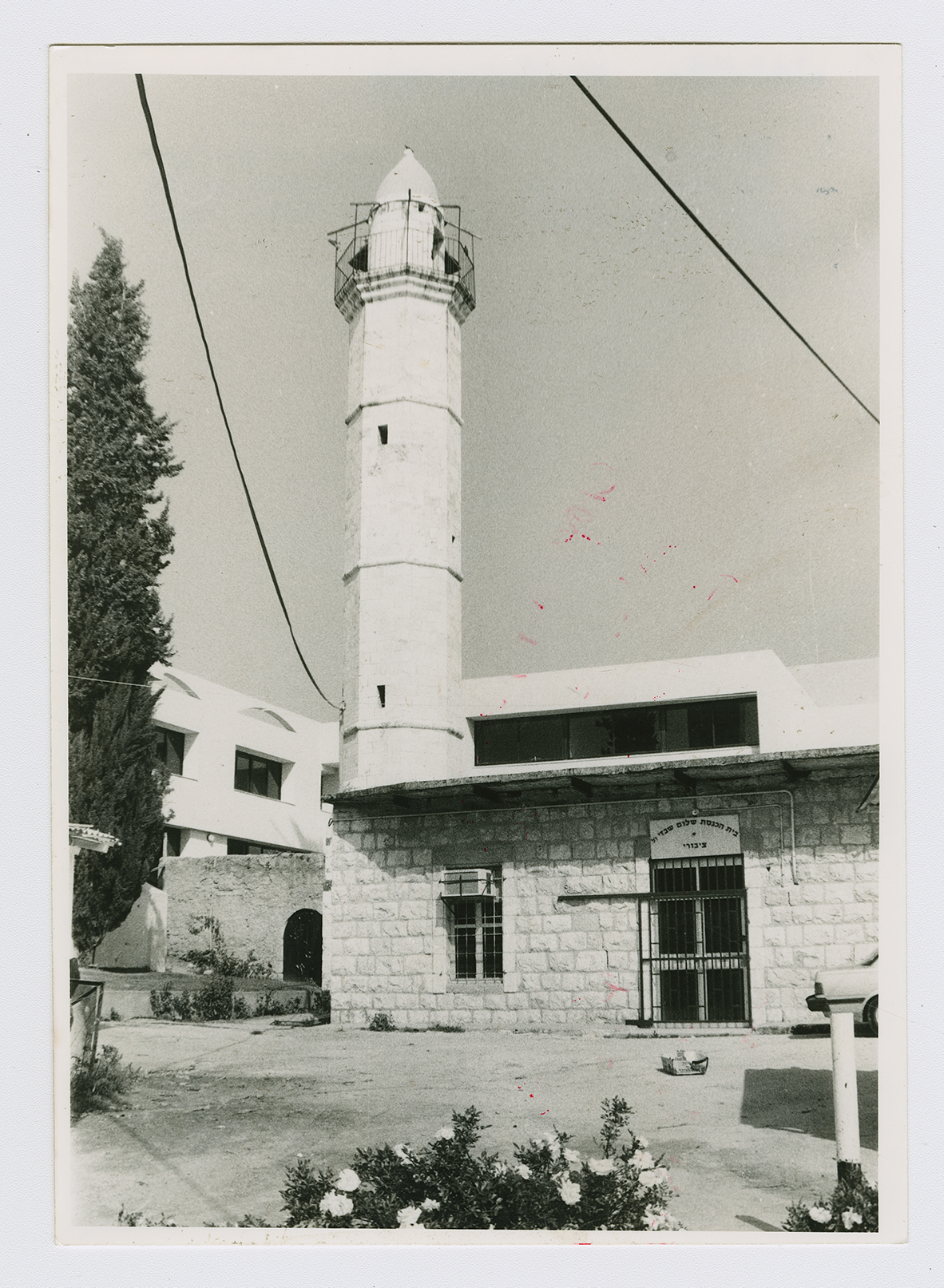 The main mosque of al-Abbasiyya, closed and deserted, in the center of the site. The Hebrew sign above the door says, "Temple [beyt ha-knesset] Shalom Shabdi." 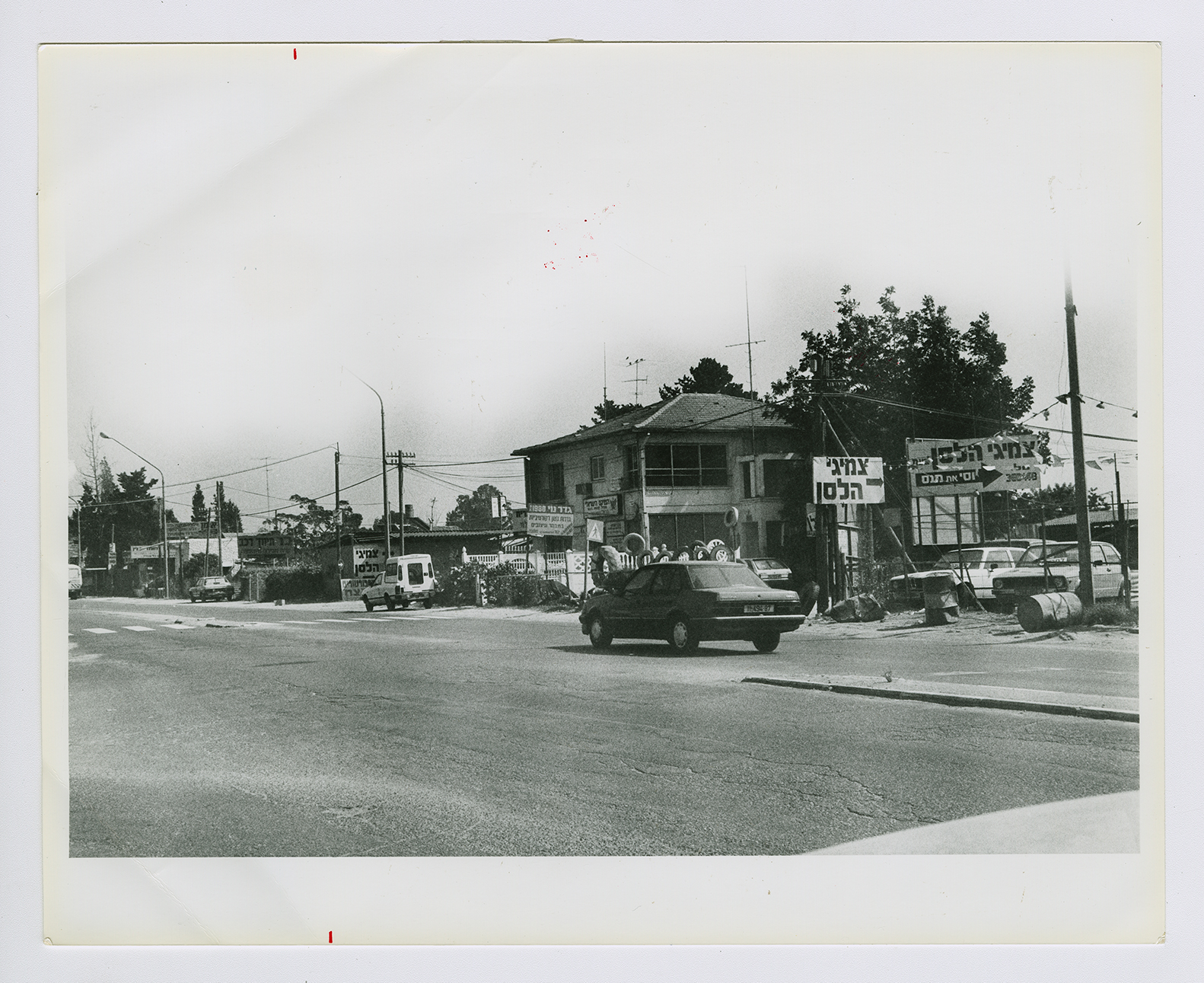