The village stood on the slopes of a rocky hill north of Wadi al-Bassa, and faced west toward the Mediterranean coast. A secondary road linked it to the Acre-Beirut coastal highway. Its name may have been derived from the Canaanite bissah, 'swamp.' It was called Bezeth during the Roman period.

Imad al-Din al-Isfahani (d.1201), a chronicler and advisor to Salah al-Din al-Ayyubi (Saladin), referred to it in his writings as Ayn al-Bassa.

In 1596, al-Bassa was a village in the nahiya of Tibnin (liwa' of Safad), with a population of 572. It paid taxes on a number of crops, including wheat, barley, olives, cotton, and fruits. Taxes were also paid on other types of produce and property, such as goats, beehives, and pasture land.

Al-Bassa was in a zone of contention between Zahir al-Umar, who became the de facto ruler of northern Palestine for a short period in the second half of the eighteenth century, and the chiefs of Jabal Amil.

Zahir's successor, Ahmad Pasha al-Jazzar, made al-Bassa the administrative center of the nahiya in about 1770.

In the late nineteenth century, al-Bassa was built of stone and had about 1,050 residents. It was situated on the edge of a plain, surrounded by large groves of olives and gardens of pomegranates, figs, and apples.

The village was part of Lebanon before World War I but was incorporated into Palestine after the war when the borders between the two countries were drawn by the British and the French.

Al-Bassa expanded during the British Mandate to include an adjacent hill that was known as al-Jubayl. By 1948 the number of houses in al-Bassa exceeded 700.

Each of the older houses usually consisted of one large (500-600 square meters) room with a high ceiling. Each house had a large hawsh (courtyard) where laundry was hung and animals were kept. The yard also included a storage room for grain and animal fodder and a well in which rainwater collected; the well supplied the household's water needs. These older houses were made of stone, clustered together and separated by stone-paved streets and alleys. The newer houses that began to appear after World War I were often farther apart and were made of concrete; a few of them had two storeys. The courtyards in these houses served more frequently as home gardens, with a variety of fruit trees and vegetables.

The residents of this village and of the neighboring village of Khirbat Ma'sub were counted together in the population statistics of 1944/45; at that time they consisted of 1,590 Christians and 1,360 Muslims. In 1948 the population was estimated at 4,000 but no breakdown along religious lines was made. This increase in population was attributed to an influx of migrants from other areas (who found jobs in the nearby British military bases) as well as to the low level of emigration from the village.

Al-Bassa was the second largest of the sub-disctrict villages in terms of population. A local council was established in al-Bassa in 1922 whose revenues amounted to 121 Palestinian Pounds (LP) in 1929, and LP1,407 in 1944. Its expenditures were approximately one-half of the council's annual revenues in both years.

After 1946 the council's budget began to suffer a deficit as a result of the construction of a network of water pipes that secured potable water for the village homes. (Prior to the construction of this pipe network, each household had obtained its drinking water from wells that collected rainwater during the winter, from a spring inside the village perimeter, and from an artesian well, drilled in the 1940s, some 1.5 km west of the village.) The local council also assisted the villagers in agricultural matters, such as hiring watchmen for the fields (who were paid by the peasants) and guiding the villagers on planting and scheduling the harvest times for various crops.

The village had a public elementary school for boys, built by the Ottomans in 1882, a private secondary school, and a public elementary school for girls. The villagers themselves established two athletic clubs, two mosques, two churches, and several shrines; some shrines were for Muslims, some were for Christians, and two were considered holy by both groups.

Workers in al-Bassa formed a local branch of the national Palestinian labor union. This union defended workers' interests and established a cooperative store in the village.

Al-Bassa had over twenty stores, which served other villages as well, and a hisba (an open wholesale and retail produce market) in the center of the village. The hisba was opened for business on Sundays. The villagers also worked in a variety of other occupations, including crafts, soap-making and, as stated above, wage employment in British military bases.

Some villagers raised animals, including cattle, during the Mandate period. At least ten families depended on their flocks of goats and sheep for their livelihood.

Village agriculture was both rainfed and irrigated. Irrigation was usually restricted to fruit trees and vegetables, most of which were planted about 2 km west of the village in an area that also had parks and coffee shops. In the early 1940s the village had a peasant cooperative that owned agricultural implements, a truck, and a harvester.

While the main crops were wheat and other grains, the land was also planted in vegetables, fruits, and nuts. In 1944/45 a total of 614 dunums of the land of al-Bassa and Khirbat Ma'sub was devoted to citrus or bananas; 10,437 dunums were allotted to cereals, and 4,699 dunums were irrigated or used for orchards.

Antiquities were found inside and outside the village. Inside were the remains of an ancient village, mosaic floors, cisterns, and rock-hewn tombs. A Christian burial place was unearthed in 1932 by the Palestine Department of Antiquities; it contained coins and glass that dated back to the fourth century A.D.

Apart from these, over eighteen khirbas were located close to the village.

According to two Israeli sources and a United Press dispatch, al-Bassa was occupied on 14 May 1948, during Operation Ben-Ami. Palestinian historian Arif al-Arif puts it three days earlier, however, on 11 May. The History of the Haganah relates that Zionist forces landed at this coastal village in boats, so that 'this was in a certain sense the first operation by the naval forces.' It adds that the inhabitants fled 'at the appearance of Jewish forces.' But eyewitnesses, later interviewed by Palestinian historian Nafez Nazzal, related a different set of events. They said that many women and children had been evacuated earlier in anticipation of an attack, but that some stayed put. On the day of the attack, the village militiamen were taken by surprise and retreated northwards. Villagers recalled that the occupying forces ordered all those who remained, mostly old people, to gather in the village church. There, they took a few of the younger people (including at least one woman) and shot them dead outside the church, ordering the others to bury them. Israeli historian Benny Morris does not mention this incident; he states that the majority of villagers had already been evacuated and most of the rest 'fled during the assault.' He adds that some were then 'ordered or 'advised' to go northwards, to Lebanon,' and that another 100 or so villagers (mainly old people and Christians) were transported to the village of al-Mazra'a, along with other displaced villagers from Galilee. According to Nazzal, a few villagers were later killed as they tried to return to the village to salvage their belongings.

Israelis founded the settlement of Betzet  in 1949 on the village site and populated it with Jewish immigrants from Romania and Yugoslavia. A military airport of the same name was built near the settlement. In the same year, settlers from the Yiftach Brigade of the Palmach established the settlement of Kefar Ro'sh ha-Niqra on village lands.

Leman, also built in 1949, was established to the east of the site on village land. Leman was originally a military base called Tzahal

, but it was renamed after U.S. Senator Herbert Lehman visited the settlement in 1959. Shelomi, a development city, was established in 1950 on village lands and is located slightly to the south of the original village site; it now has a population of about 2,200.

Matzuva , originally founded in 1940, has expanded, and now some of its buildings are on village land.

Only two of the main buildings of the village, a Greek Catholic church and a Muslim shrine, are extant. The church, made of stone, is rich in architectural features, including one high window with a circular arch, flanked by two smaller ones with similar arches. The pulpit area, at one end of the structure, is half-cylindrical and also has high arched windows. The belfry rises from a gabled, tiled roof. This church is now collapsing on one side and its walls are cracking. The Muslim shrine is domed and stands deserted in the midst of many trees, including two palms. A number of village houses remain, some occupied by Israelis. One of them is a large two-storey building that has both rectangular and arched doors and windows. The frame of one door is made up of four circular columns, two on each side, and a lintel, with decorative carvings. Above the lintel there is an additional decorative arch.

Fig trees, thorns, cactuses, and piles of stones from destroyed houses are scattered across other parts of the site. The lands around the village are cultivated. 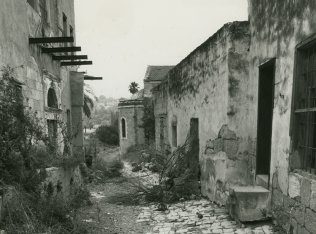 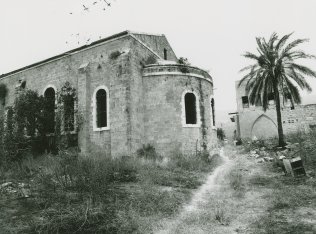 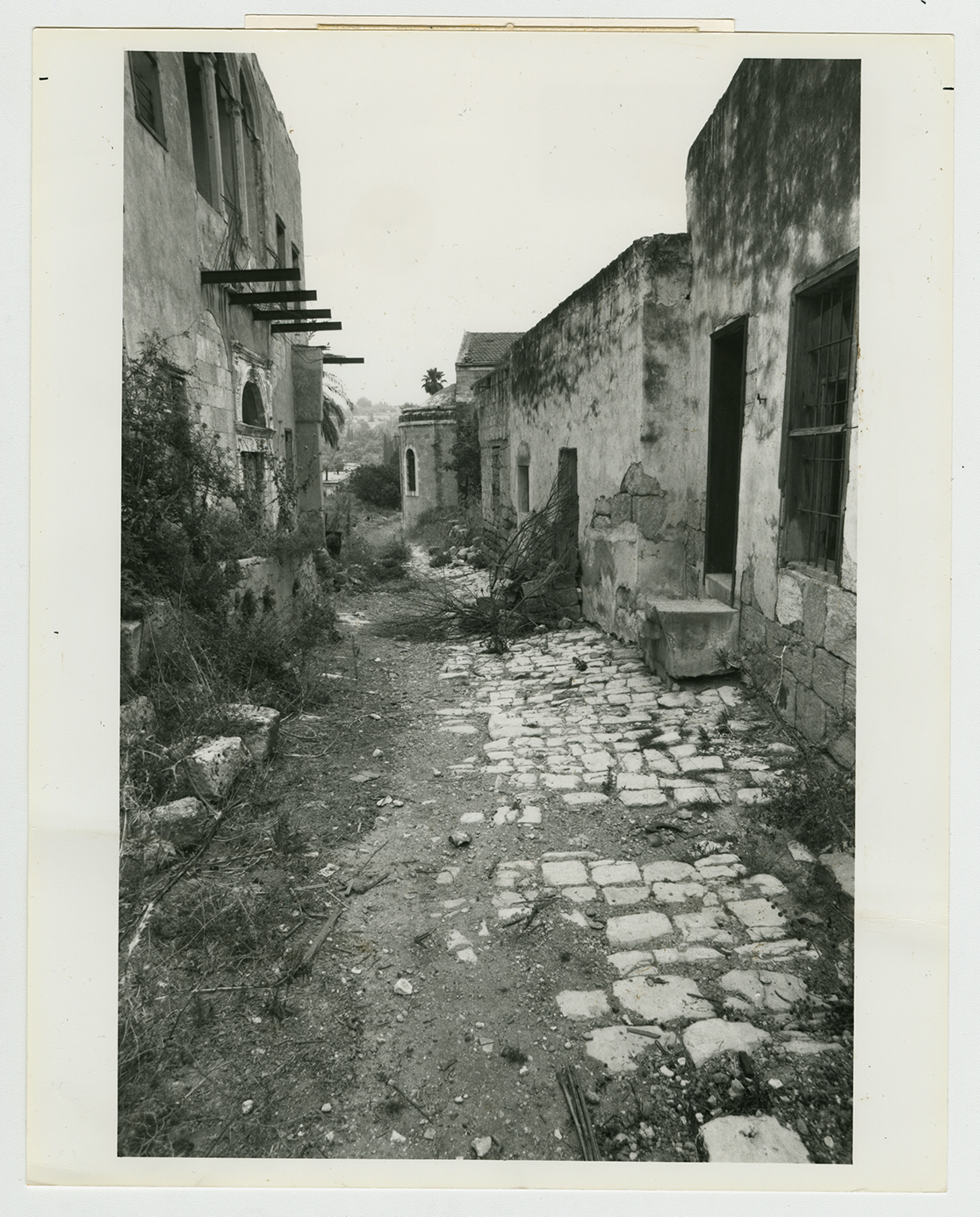 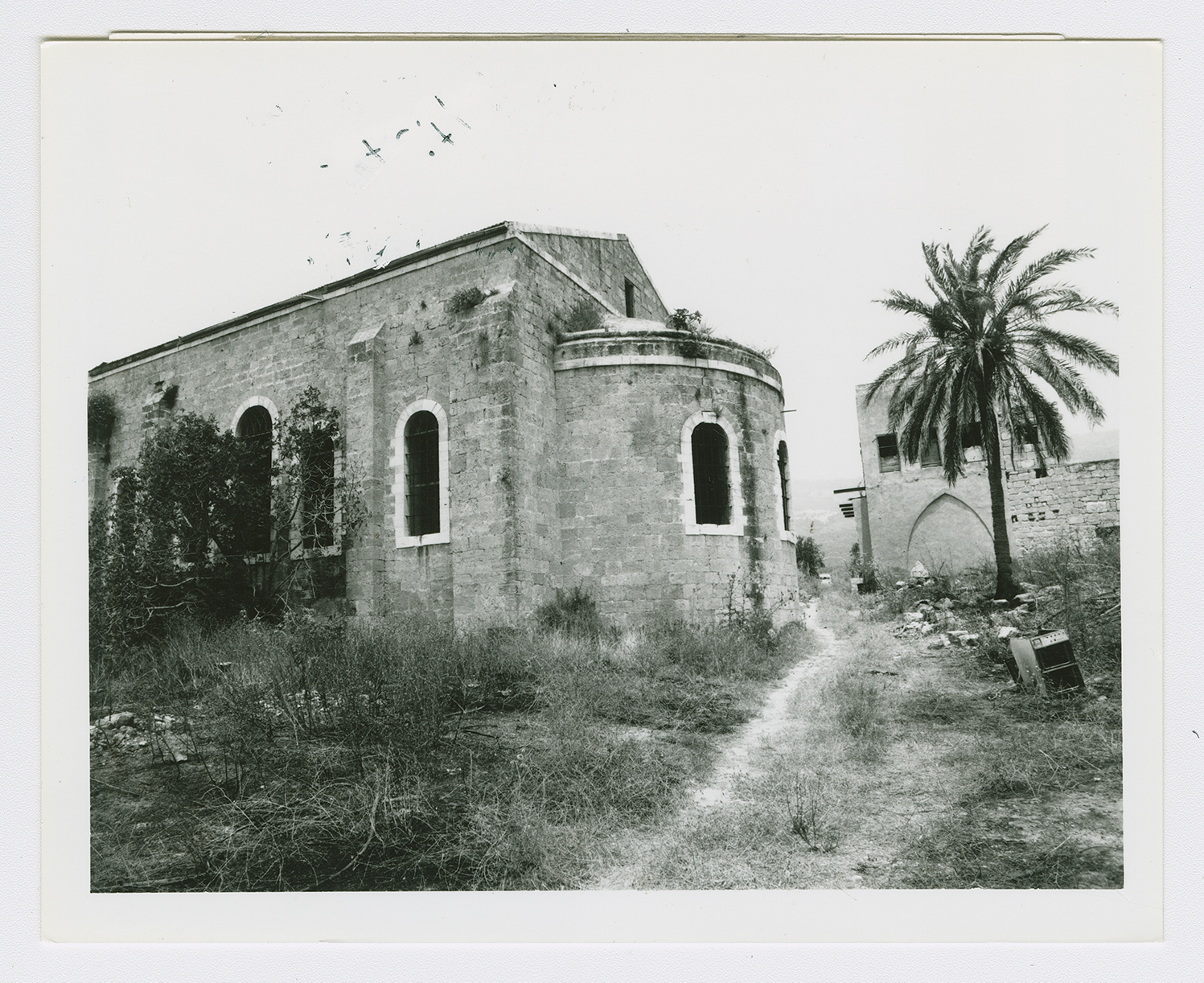