The village, built on several dome-shaped hills on the central coastal plain, was on the north side of the Ramla-Jerusalem highway. The name al-Qubab ('the domes') most likely referred to these hills. The village fell within the intermediate zone between the plain in the west and mountains in the east and as such, it belonged to a group of villages that were dubbed the 'irqiyyat ('the small hills'). The Jerusalem chronicler Mujir al-Din al-Hanbali (d. ca. 1522) wrote that al-Qubab was a village within the administrative jurisdiction of Ramla in 1493.

In the late nineteenth century, al-Qubab was a village built of adobe bricks and was situated on rising, rocky ground, surrounded by cactus hedges and olive trees.

Later houses, made of mud and stone, were built close to each other.

In modern times, all the residents of al-Qubab were Muslims. An elementary school was established in the village in 1921, and by 1947/48 it had an enrollment of over 233 students. The village also had a mosque and a marketplace with a number of small shops. Wells and springs in the vicinity supplied the village with water. Agriculture and animal husbandry comprised the main economic activities of the residents, who grew grain, vegetables, and fruits. In 1944/45 a total of 12,295 dunums was allotted to cereals; 238 dunums were irrigated or used for orchards. Next to al-Qubab was Khirbat Yarda (143140), which contained the foundations of buildings, a wine press, a cemetery, and the inevitable fragments of pottery.

A New York Times correspondent wrote that Haganah forces captured al-Qubab in an effort to reopen the highway to Jerusalem on 15 May 1948, the same day that the British Mandate ended. These forces occupied Bayt Dajan, which lay along another stretch of the Jaffa-Jerusalem road, at the same time. But the attack also coincided with Operation Barak (see al-Batani al-Gharbi, Gaza sub-disctrict), which led to the capture of nearby Abu Shusha on the same day. Israeli historian Benny Morris confirms this date. However, the History of the War of Independence puts the occupation of al-Qubab at least two weeks later, stating that it was taken in early June by the Yiftach Brigade in an attempt to distract Arab forces during one of the battles over al-Latrun. This also agrees with a 7 June report by the Associated Press that Israeli troops had taken the village.

The differing accounts of the date of occupation suggest that the Israeli hold on the village was shaky during the first two weeks after its capture. By the following month, control of the village was much firmer; on 11 July, the New York Times reported that people fleeing as a result of attacks in the Lydda and Ramla areas had to travel on camel trails towards Ramallah, since the main road had been blocked by the Israelis at al-Qubab.

On 13 September 1948, Israeli prime minister David Ben Gurion requested permission to destroy fourteen villages, including al-Qubab, from a special Israeli committee organized for this purpose. The request was made in the name of the commander of the Central Front, General Zvi Ayalon.

The part of the site on the north side of the kibbutz is covered by woods. The only landmark that remains is the school; a number of stone houses that have rectangular doors and windows still stand, and some of them are used as Israeli residences. One is rectangular and has two doors, one high window and two very small windows, one on the side and another in the front. Another residential house is angular; there is a tall tree in the yard in front of it. One of the houses used for storing agricultural tools and equipment is rectangular, with four front entrances and a high window. Another house, used at present as a shop, has a stairway leading to a front porch that is enclosed by wire grillwork. A variety of trees and other types of vegetation grow on the site, including eucalyptus and carob trees, cactuses, and foxtail (see photos). The surrounding land is planted with almond and olive trees. 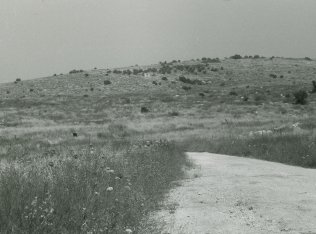 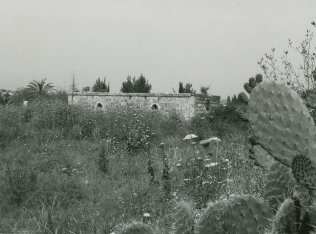 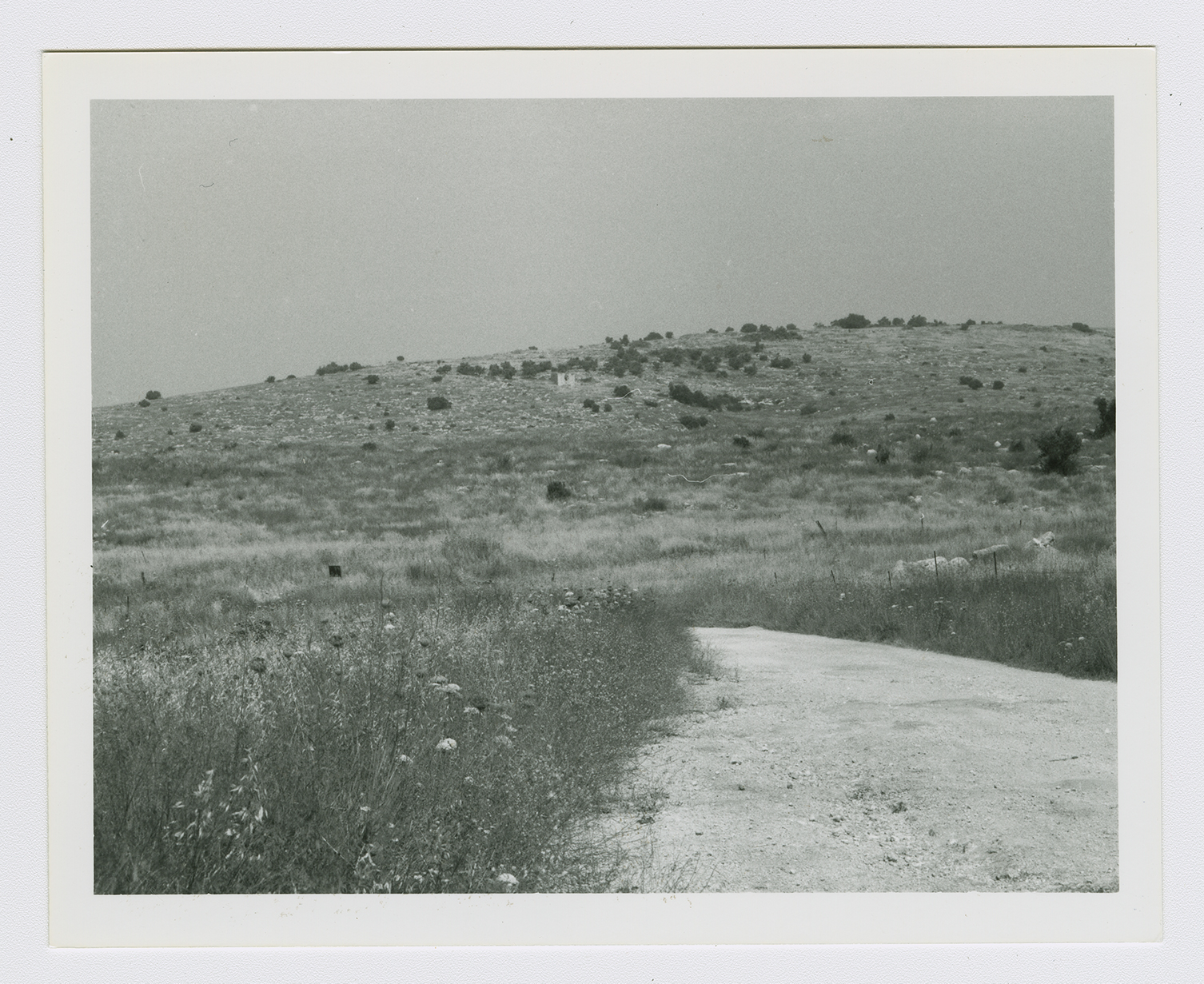 One of the hills on which the village stood. 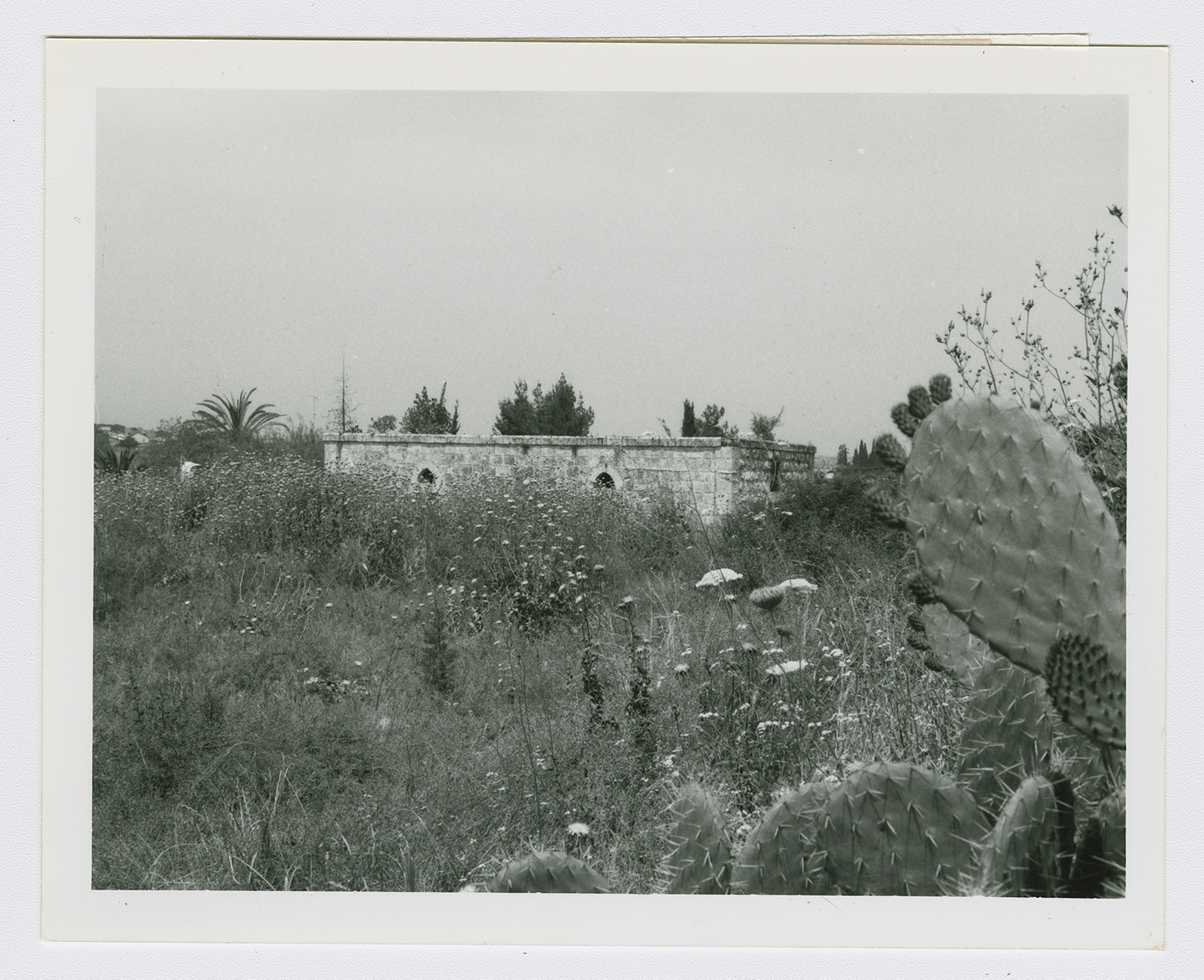