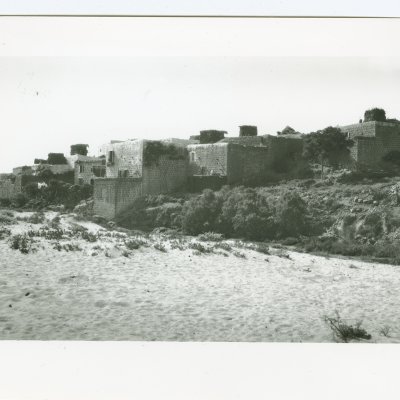 The village was situated on a dome–shaped hill on the Mediterranean coast, east of the coastal highway and the railway line. It was established on top of a Canaanite town, Akzib ('trickster'), which was taken by the Assyrians in 701 B.C. Archaeological excavations have shown that settlement began long before this date, in the eighteenth century B.C., and that by the tenth century B.C. there was a walled town on the site. The Romans called it Ecdippa and the Crusaders either Casal (small citadel) Lambertie or lmbert. The Arab geographer Ibn Jubayr, who toured the area in 1182–84, said only that the village lay between Acre and Tyre.

Later, another Arab geographer, Yaqut al-Hamawi (d. 1228), described al-Zib as a large village on the coast near Acre.

In 1596, al-Zib was a village in the nahiya of Akka (liwa' of Safad), with a population of 875. It paid taxes on a number of crops, including wheat, barley, summer crops, fruits, and cotton, as well as on other types of property, such as goats and beehives and water buffalos.

An eighteenth–century Muslim scholar and judge, Abu Ali al-Zibi, was born in the village. At the beginning of the nineteenth century, the British traveler Buckingham referred to it as a small town built on a hill near the sea with a few palm trees rising above the houses.

In the late nineteenth century, al-Zib was a village built of stone and situated on the seashore. The villagers, who were Muslims and who numbered about 400, cultivated olives, figs, mulberries, and pomegranates. The village also contained a small mosque.

In more recent times al-Zib was square–shaped its houses were bunched close together and were made of stone and mud, stone and cement, and reinforced concrete. The village had an elementary school, founded by the Ottomans in 1882, a mosque, and a clinic. The villagers were engaged in fishing and agriculture, especially fruit cultivation. In 1944/45 a total of 2,972 dunums was devoted to citrus and bananas and 4,425 dunums were allocated to cereals; 1,989 dunums were irrigated or used for orchards. Between 1927 and 1945 the fish catch averaged over sixteen metric tons per year. The village had two animal–drawn olive presses and two mechanized presses. There was an archaeological site in the village that contained the foundations of buildings, floors, a cistern, and rock–carved tombs. In addition, there were six khirbas within a 4 km radius around al-Zib

On 13–14 May 1948, the Haganah's Carmeli Brigade initiated an invasion of the northwest corner of Palestine. Al-Zib was one of the main villages targeted during the offensive known as Operation Ben-Ami. The History of the Haganah's account of the occupation states: 'The inhabitants fled at the appearance of the Jewish forces, and the Haganah command decided to hold onto [it].' But Israeli historian Benny Morris contradicts this version. He states that the Haganah 'had a long account' with the village (apparently because it had been a center of resistance) and that most of the villagers fled during a mortar barrage unleashed as part of the assault on the village. The villagers themselves corroborated this version, recalling a battle that involved an element of surprise. Interviewed by Palestinian historian Nafez Nazzal, they said that the Zionist forces were initially mistaken for Arab reinforcements, since they were wearing red and white Arab headdresses, and that they overwhelmed the thirty–five or forty men who had formed the village militia. Some villagers who were unable to flee during the battle stayed behind and were later moved to the village of al-Mazra'a, which became the collection point for Arab 'remainders' in Western Galilee. The operation's commander, Moshe Carmel, ordered the village to be razed to the ground in order to 'punish' the villagers and make sure they 'could and would never return.'

In December 1948, Yosef Weitz, the director of the Jewish National Fund's Lands Department, visited al-Zib and noted that it had been 'completely levelled,' adding, 'I now wonder if it was good that it was destroyed and would not have been a greater revenge had we now settled Jews in the village houses.'

A kibbutz named Beyt ha-Arava was established on the ruins of the village on 27 January 1949; its name was later changed to Kibbutz Gesher ha-Ziv.

Jewish immigrants from England, the United States, and South Africa were placed in Gesher ha-Ziv, which is on village lands, close to the village site. The settlement of Sa'ar was established south of the village site in 1948. Another settlement, Leman, is close by, on lands that belonged to the village of al-Bassa.

All that remains of the village is the mosque, which has been restored for tourism, and the house of the mukhtar (the village head) Husayn Ataya, which is now a museum. The house is relatively large and made of masonry. The stone mosque has a dome and a large decorative arch on the front facade. There is a side annex made of two monumental archways. A number of tombstones with inscribed identifications are shown in the museum. One has a Quranic verse, identifies the dead man as Ahmad al-Musa, and records the date of his death as 14 September 1938. Some archaeological artifacts may still be found, including the remains of stone arches near the mosque. The site and adjacent land are used as a recreation area and tourist attraction. 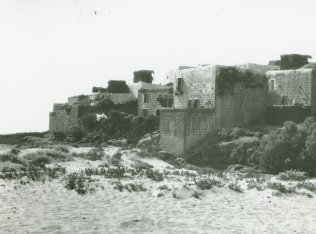 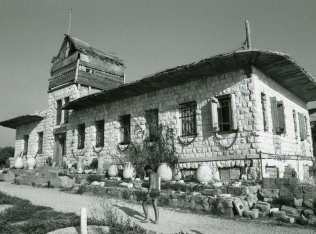 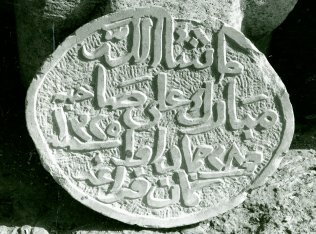 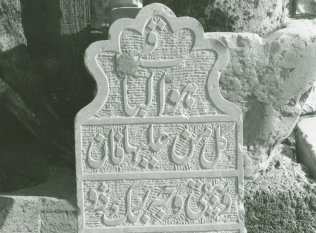 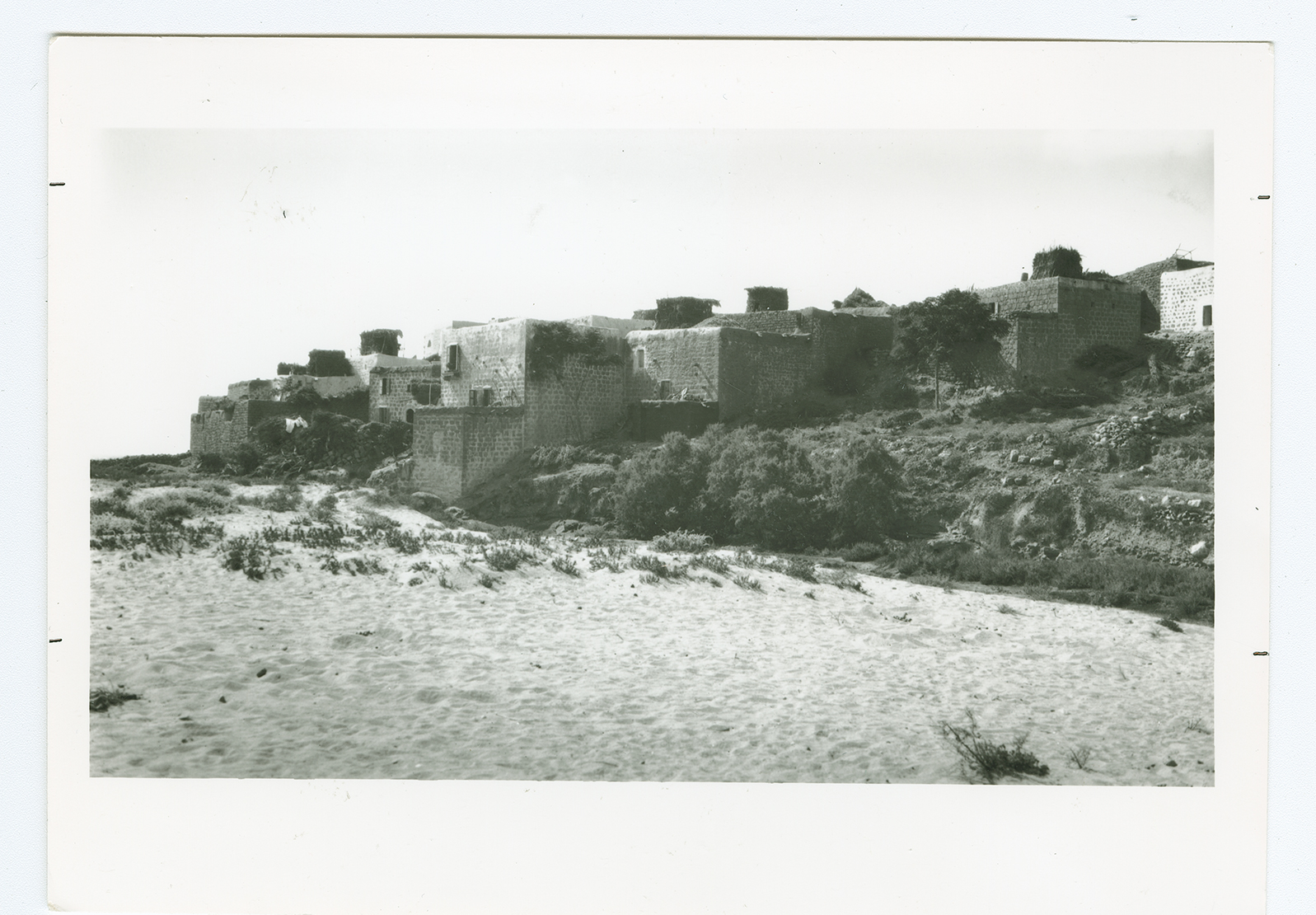 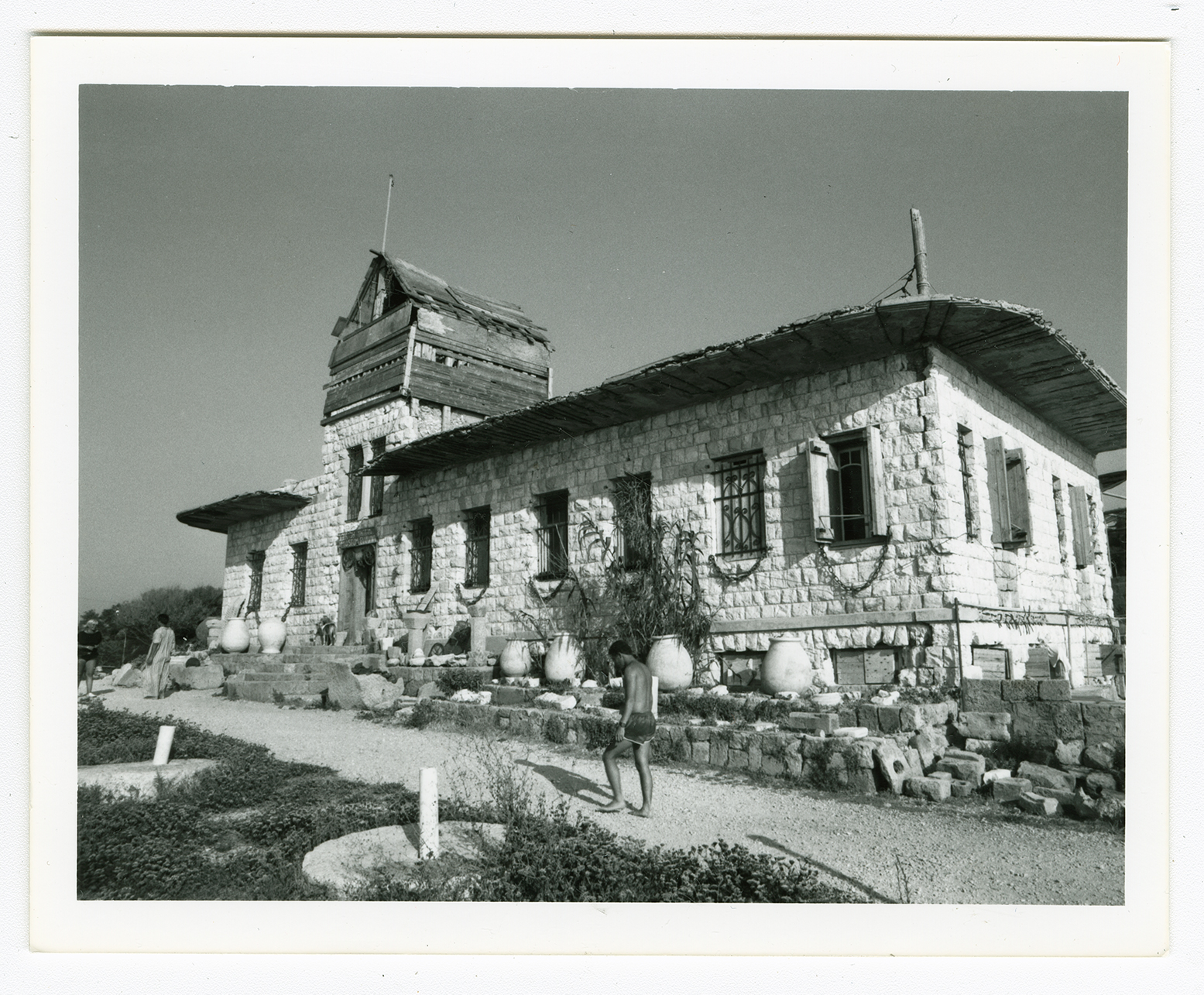 The house of the village mukthar, now turned into a museum. 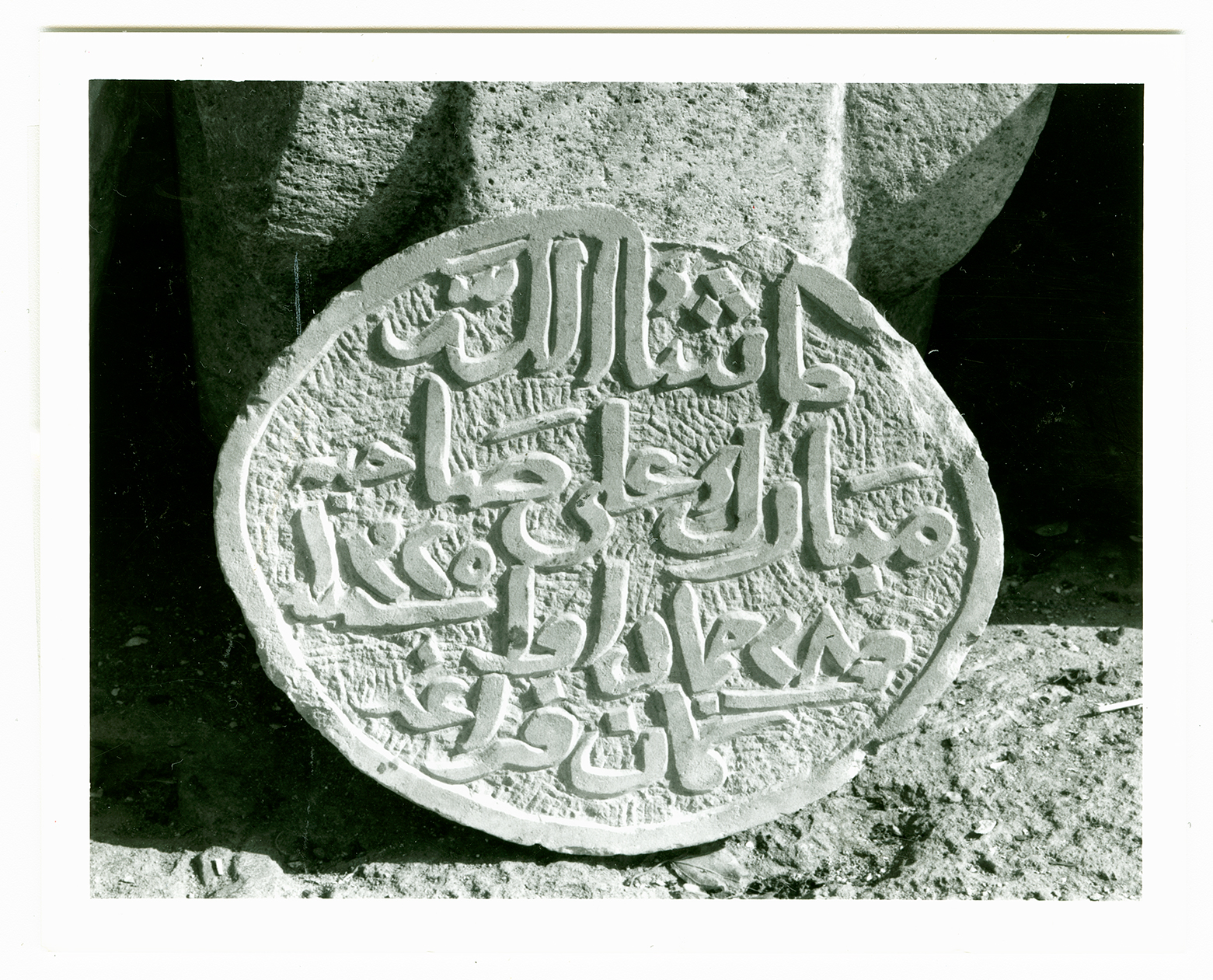 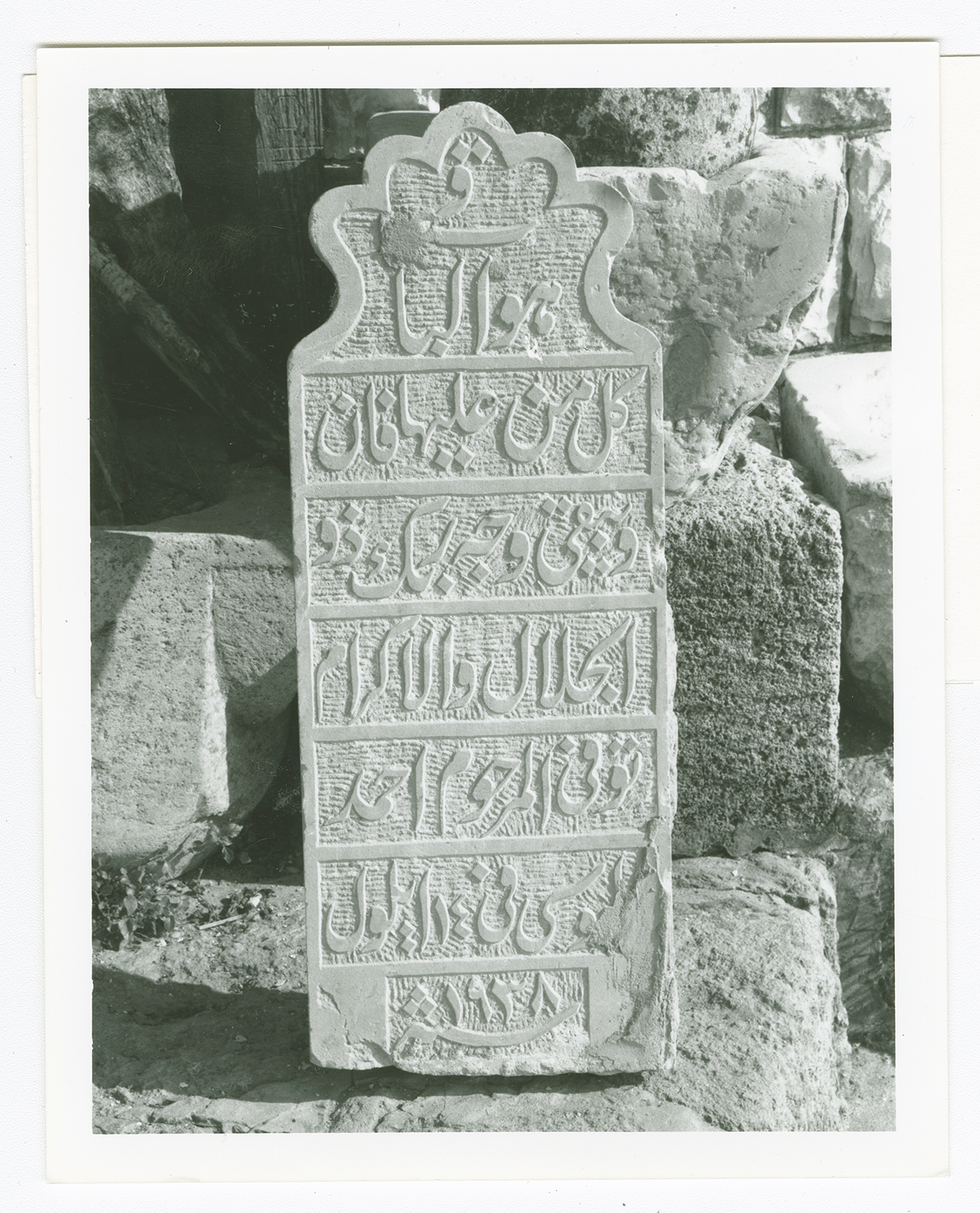 A headstone with Qur'anic verse from the tomb of Ahmad al-Musa, d. September 1938.