The village, built on the upper slope of a mountain, overlooked a wide coastal plain to the west. Secondary roads linked it to the Jerusalem−Jaffa highway, as well as to neighboring villages. Its population in 1875 was approximately 450.

In the late nineteenth century, Bayt Mahsir was a village of moderate size that stood on several spurs overlooking lower hills to the west. The villagers grew olive trees to the north and obtained their water from a spring to the northeast.

The village layout was trapezoidal in shape, with stone and adobe houses clustered in four separate quarters. The village expanded along the various roads leading to the neighboring villages, especially the road that led to Saris. A main street passed from east to west through the center of the village. Shops and other public buildings, including the village mosque, were built on both sides of the street. The villagers, who were Muslim, took pride in the fact that the last imam of the mosque, Shaykh Khalil As'ad, was a graduate of al-Azhar University (a renowned institute of Islamic learning in Cairo). The people of Bayt Mahsir maintained two village shrines (maqams) in addition to the mosque. Bayt Mahsir had an elementary school that was located in the western part of the village, a secondary school in the east and a girls' school that was housed in what was originally the village infirmary.

The residents worked in rainfed agriculture, growing grain, fruit trees, olives, and grapes. Woodlands covered a wide area near the village. In 1944/45 a total of 6,225 dunums was allotted to cereals; 1,348 dunums were irrigated or used for orchards. The village had an olive press and flour mills. Archaeological sites in the vicinity included Khirbat al-Huwaytiyya (154134), Khirbat al-Masi (152135), Khirbat Khatula (151135), and Khirbat al-Sallam (151134).

Although the village was targeted for occupation during Operation Nachshon (see Bayt Naqquba, Jerusalem sub-disctrict), in early April 1948, it was not taken until the first half of May. In the wake of Nachshon, the Haganah launched a series of attacks in an attempt to widen their corridor to Jerusalem and capture the strategic al-Latrun salient. Bayt Mahsir fell during Operation Makkabi (see Khirbat Bayt Far, Ramla sub-disctrict) to the newly-formed Har'el Brigade of the Palmach. The History of the Haganah states that 'this village was not occupied easily; but was attacked by Palmach troops for three nights, and it was not occupied until the morning of 11 May.' The account states merely that the occupiers found booty taken from Haganah military convoys ambushed in the area; no mention is made of the fate of the villagers. The New York Times reported that two commando battalions of the Palmach were involved in the thirty-six-hour battle. After 'tentative thrusts' on 9 May, the Sixth Palmach Battalion (some 400 to 500 men) seized strong points around the village at 11:00 p.m. that night. The Arab forces withdrew; that night, they launched a counterattack that lasted for two days. On 12 May, they claimed to have recaptured Bayt Mahsir, but their hold on the village apparently was not firm.

The Arab Liberation Army's (ALA) Qadisiyya Battalion was defending the village, and ALA commander Fawzi al-Qawuqji described the situation from the Arab side. On 9 May, he reported that they had 'repelled a violent Jewish attack on Bayt Mahsir aimed at opening the Jerusalem road.' The following day, the commanding officer at Bayt Mahsir, Lt. Col. Mahdi Salih, cabled to say that the situation was 'critical.' Qawuqji sent one of two reserve battalions to the area, which helped to encircle a large detachment of Jewish forces in the area. On 11 May, these forces were said to be withdrawing and ALA units had captured the woods near the village. But on 12 May, Qawuqji informed the High Command that 'Jewish forces coming from Jerusalem and outskirts succeeded in entering Bayt Mahsir thanks to the large reinforcements with all kinds of equipment which arrived constantly.' He indicates that the village was recovered the same day through artillery bombardment and a frontal attack. However, the recovery of the village was probably short-lived. Soon afterwards, Bayt Mahsir was captured and systematically levelled after occupation, according to Israeli historian Benny Morris.

In late March, the New York Times reported that the village had been occupied briefly by British army units. Together with Ishwa' and 'Artuf, Bayt Mahsir had withstood a British assault following an Arab attack on the Jewish settlement of Hartuv, nearby. 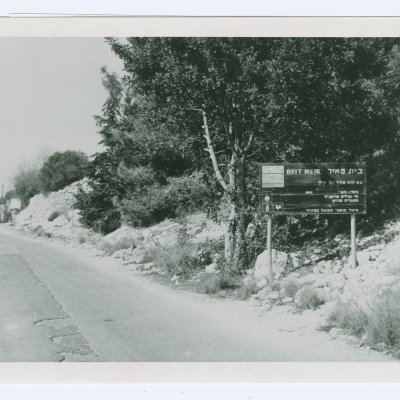 Even before Bayt Mahsir was occupied, the Head of the Haganah National Staff, Israel Galili, told the Jewish National Fund (JNF) in mid-April that it was important to establish a settlement at this site for 'security' reasons. But this plan took several months to implement, according to documents cited by Morris. The JNF submitted a plan in August which proposed a settlement on the ruins of the village, to be called Beyt Me'ir. Morris states that this settlement was initially called Lehagshama and was established in the following month, on 27 September 1948.

Other sources, however, state that Beyt Me'ir (153133) was founded on village lands in February 1950 and that Lehagshama was the original name of Shoresh (156133)

, which was established on the lands of Saris (Jerusalem sub-disctrict) in 1948. Mesillat Tziyyon (151134) was founded in 1950, northwest of the village site.

Several village houses have been spared, and are for the most part interspersed among the houses of the settlement of Beyt Me'ir. Two large, rectangular-shaped, almost identical houses built of limestone rise above the Israeli settlement's cabin-like residences. Each has three main square sections. The middle section seems to have included a main entry hall, a reception area, and living quarters. The main entrance is a high door topped with a semicircular arch and flanked by two long but narrow windows, also with circular arches. The other two sections on either side of the main lobby also have arched windows, but these are wider than the ones flanking the main entrance (see photos).

The remains of a flour mill, a metal machine with flywheels fitted over a stone structure, can still be seen. There is a wild forest of old trees on the eastern edge of the village Site, on top of the mountain. The tomb of al-'Ajami, together with other graves, are among the trees. The rubble of stone houses can be seen on the western side of the village site, along with the rubble of stone retaining walls in the orchards. The remains of entrances to caves that were once used as dwellings are also visible. Several abandoned wells are at this site. Southwest of the site are two deserted houses; one of them has a water reservoir in its yard. The woodland in the outskirts of the village has been designated as a reserve area by the Jewish National Fund, given the name "District No. 356," and dedicated to "The Lions International−Israel." 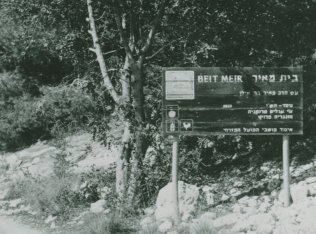 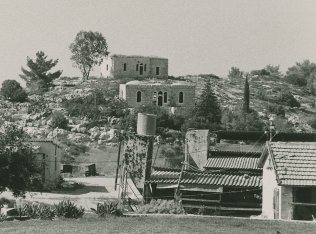 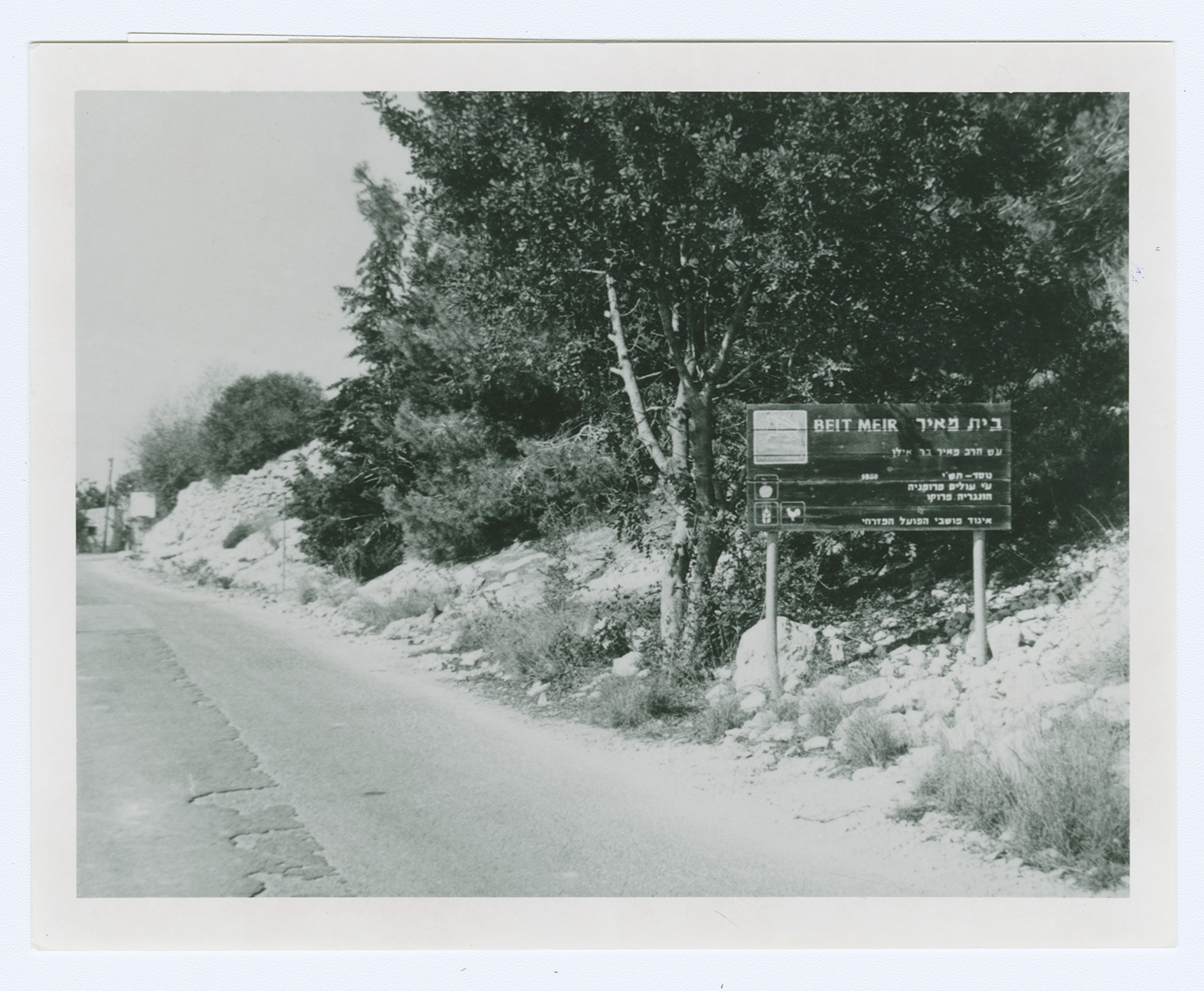 The entrance to the settlement of Beit Meir (Beyt Me'ir) located on the village site. The Hebrew sign says: "Named after Rabbi Meir Bar-Ilan." 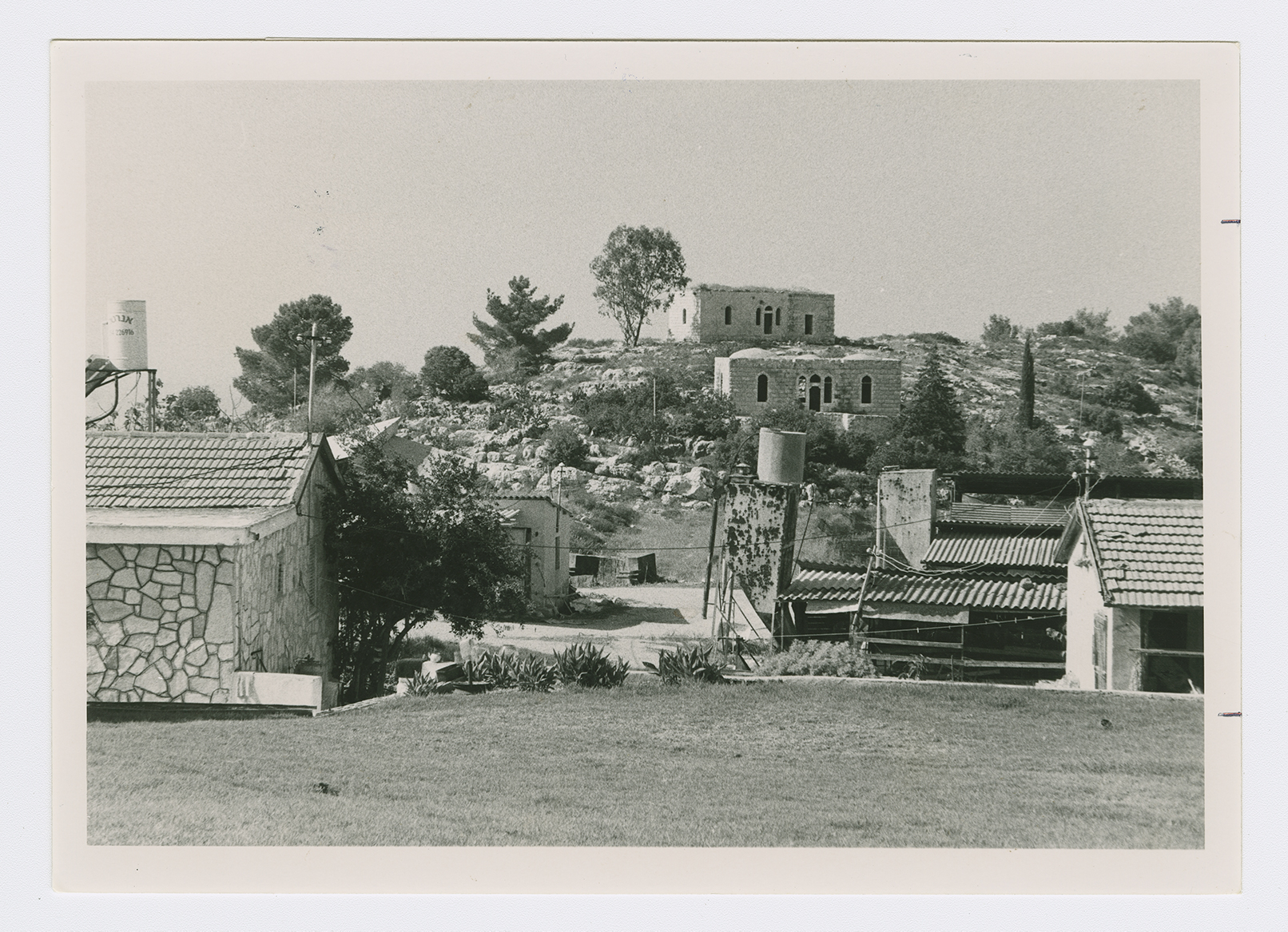