The village was built on a mountain peak in the southwestern part of Mount Carmel. It was bordered by a plain on the northeast and by a wide wadi (Abu Madi) on the south, and was linked via a secondary road to the coastal highway that ran 3 km west of the village. In 1596, Ijzim was a village in the nahiya of Shafa (liwa' of Lajjun), with a population of fifty-five. It paid taxes on a number of crops, including wheat, barley, and olives, as well as on other types of produce, such as goats and beehives.

It was the hometown of al-Shaykh Mas'ud al-Madi, the leader of the Haifa coastal area in the early nineteenth century and governor of Gaza for some time. The powerful al-Madi family dominated the coastal region south of Carmel and the western slopes of Jabal Nablus during the first half of the nineteenth century. Their primary place of residence was Ijzim, where they built a large fortress.

Another resident of Ijzim, Yusuf al-Shafi'i, became the judge of the Beirut court in 1887.

Ijzim was the second largest village in the Haifa sub-disctrict in terms of land area. Its houses extended along a north-south axis and were mostly built of stone and cement. ljzim had two mosques and a boys' elementary school, established about 1880 during Ottoman rule. The village residents were almost exclusively Muslim, except for 140 Christians who lived there in 1945. Its lands contained several springs, wadis, and wells. The villagers derived their income from animal husbandry and agriculture. Grain was the village's most important crop, but it was also known for its olive trees, which in 1942/43 occupied some 1,340 dunums. In 1944/45 a total of 17,791 dunums was allotted to cereals and 2,367 dunums were irrigated or used for orchards. It had three hand-operated olive presses and one mechanical press. The village was constructed over the remains of an earlier settlement, and there were also ruins in nearby Khirbat Kabbara and Khirbat Maqura, neither of which have been excavated.

Along with Ayn Ghazal and Jaba', Ijzim was part of a triangular region south of Haifa that held out under Israeli attack until late July 1948. The History of the War of Independence notes that these 'daring and stubborn' villages 'did not merely stand fast, but continued to block our transportation along the coastal road.' The account states that the first two (unsuccessful) attempts to occupy the village were made on 18 June and 8 July 1948. The third attempt was planned as a 'police operation against a population in revolt against the state, and which refuses to recognize the legitimate sovereign authority.' This formula was adopted in order to hide the fact that the operation was in clear violation of the Second Truce of the war. It was named Operation Shoter (Police), but the History states that it was 'actually a military operation in execution.'

The attack began on 24 July and resulted in the occupation of the villages two days later, after heavy artillery and aerial bombardment, according to Israeli historian Benny Morris. United Nations mediator Count Folke Bernadotte later reported to the Security Council that Israeli forces attacked the villages on 18 July, at the beginning of the second truce, and that the air and land attack took a total of seven days. The Associated Press reported on 26 July that Israeli planes and infantry had violated the Palestinian truce by attacking three Arab villages. By 30 July, a New York Times correspondent mysteriously noted that the situation 'has now apparently calmed down owing to the prompt action of the United Nations observers.' The UN observers reported that the situation was 'serious.' Historian Benny Morris writes that units of the Golani, Carmeli, and Alexandroni brigades captured the villages and that almost all the remaining inhabitants were forced to leave or 'spontaneously fled eastwards.' Villagers later related that they were repeatedly fired upon by soldiers and aircraft as they left the villages. Bernadotte said in September that the villagers had 'attempted to negotiate with the Jewish Army.' He was quoted by the Times as saying that 8,000 people had been driven out of their homes in the three villages, and they were reported to be seeking refuge in the Jenin area. The Secretary General of the Arab League said at the time that 4,000 people had been made refugees, and another 10,000 captured while many had been massacred in the attacks. A preliminary UN investigation stated that a total of 2 bodies had been found in all three villages, but in September UN investigators put the number of killed and missing at 130. On 13 September, Bernadotte ordered Israel to readmit the refugees to the three villages and to rebuild their shattered homes. The Israelis refused to comply.

Israel established the settlement of Kerem Maharal on the village site in 1949.

The village has been partially destroyed. The mosque has been allowed to deteriorate, but several houses are still in use. The meeting house (diwan) of Mas'ud al-Madi, which is a two-storey structure dating to the eighteenth century, has been converted into a museum. The school has been turned into a synagogue and the cafe into a post office. The nearby plain is farmed by Israelis, while the mountainous areas have been turned into recreational parks. 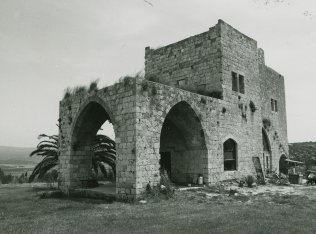 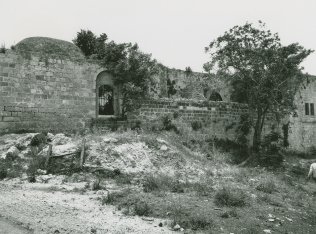 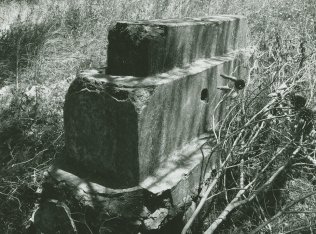 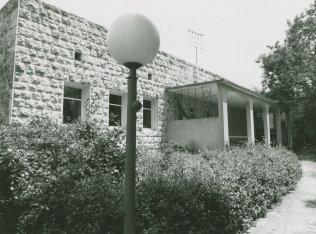 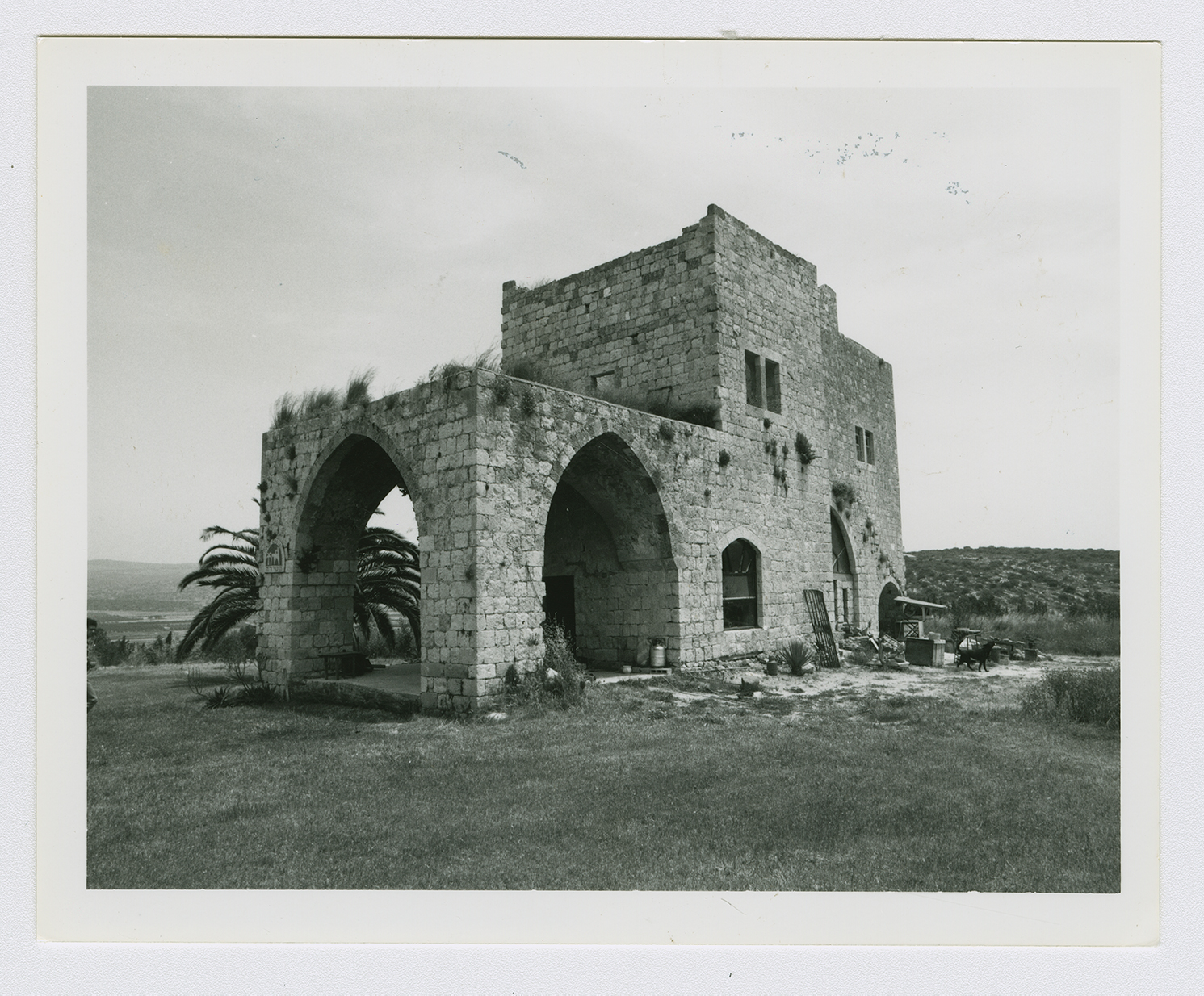 The house of a village elder. 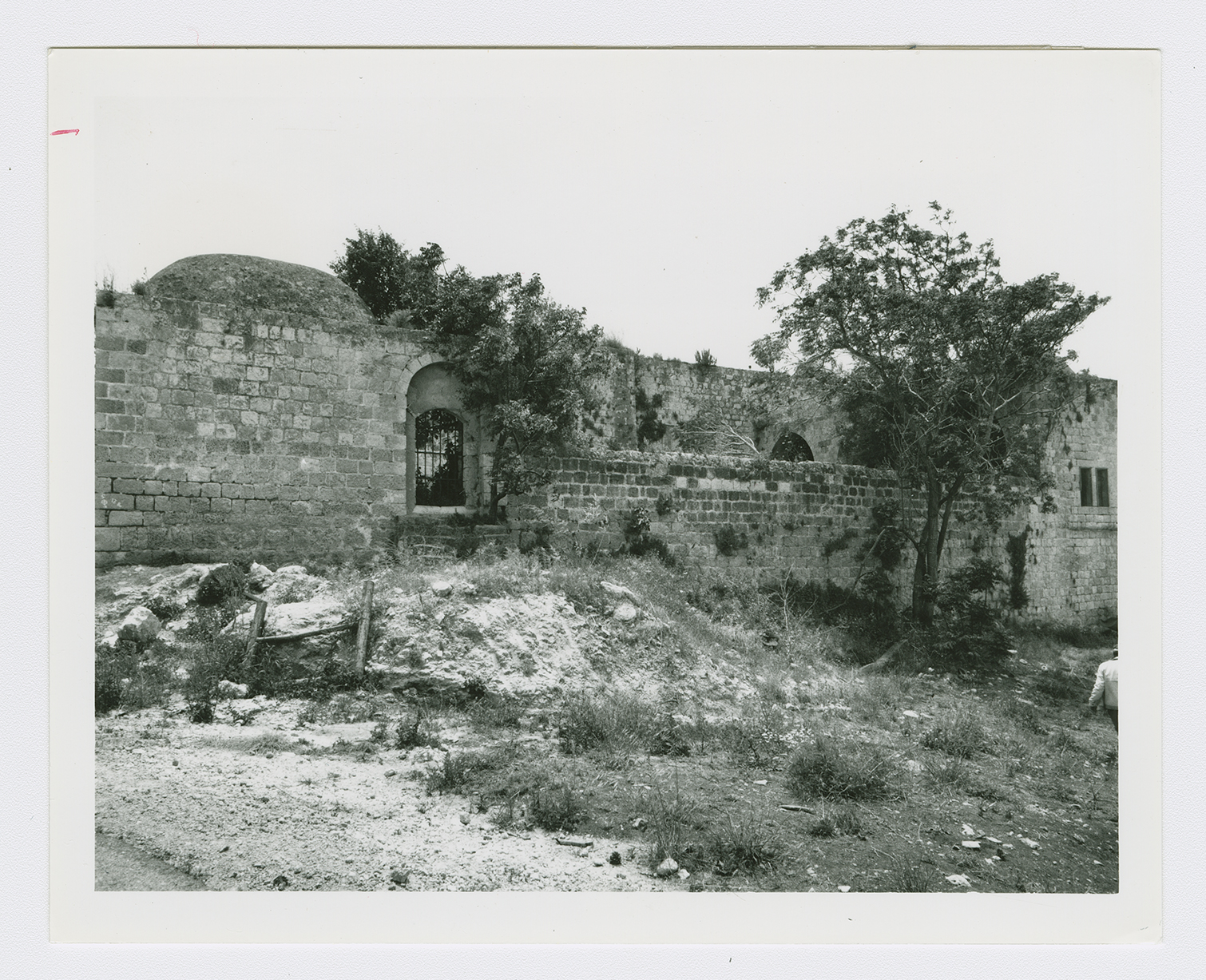 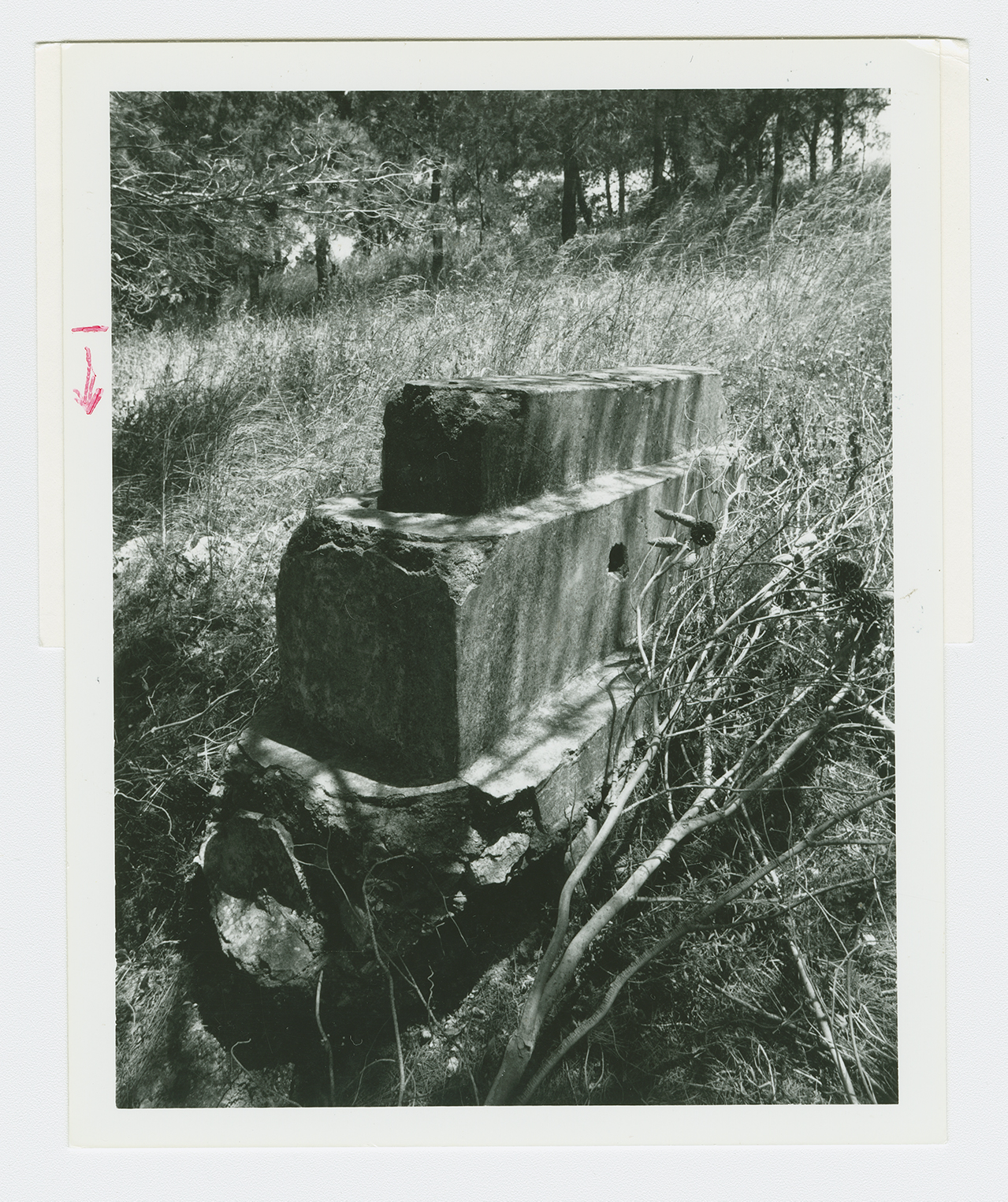 The grave of a villager from Ijzim who was hanged in Acre prison in 1936 for participating in the rebellion against the British. 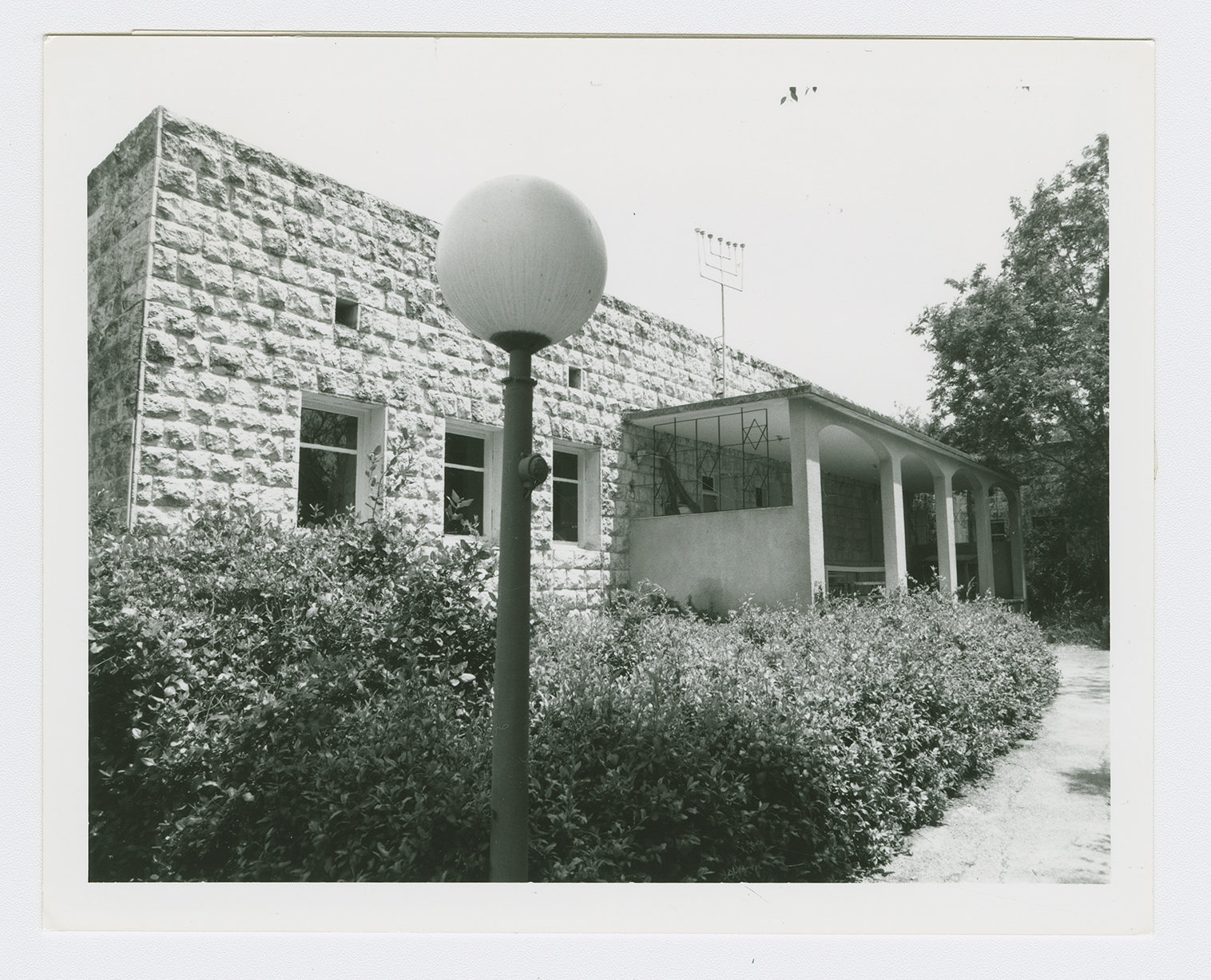 The village school, now a synagogue.