The village stood on a large, low hill on the southeastern slope of a mountain, surrounded by wadis to the east and south. It lay on the highway linking Bayt Jibrin (a major village in Hebron sub-disctrict) to the Jerusalem−Jaffa highway, and was connected by secondary roads to a group of nearby villages. Ishwa' is thought to have been established over the site of the Canaanite city of Eshta'ol. It was known by that name during the Roman period, when it fell within the administrative sub-disctrict of Eleutheropolis (Bayt Jibrin). However, Dayr Abu al-Qabus, 0.5 km to the north, has also been identified with the Eshta'ol of Roman times. During the sixteenth century settlement seems to have shifted 0.5 km to the northwest to the site of the village of 'Islin (see 'Islin, Jerusalem sub-disctrict). When the site of 'Islin went out of use―during the seventeenth or eighteenth century―Ishwa' was probably repopulated; by 1875 it had a population of about 450.

In the late nineteenth century, Ishwa' was built near the foot of a hill, and olive trees were planted below the village.

Ishwa' had a star-shaped configuration, its (mostly stone) houses extending along the roads leading to other villages. Newer construction extended south and northwest, in the direction of 'Islin.

The residents of Ishwa' were Muslims; they maintained a mosque called Ishwa', after the prophet Joshua (in Hebrew Yeshu'). Their village had a few small shops and an elementary school. Drinking water was provided by 'Ayn Ishwa', north of the village, and from a few other, smaller springs and wells. Agriculture was rainfed; the villagers planted grain, olive trees, vineyards, and fruits on their land. In 1944/45 a total of 1,911 dunums was allocated to cereals; 473 dunums were irrigated or used for orchards. Two khirbas lay near the village to the southeast: Khirbat al-Shaykh Ibrahim (151131) and Khirbat Hammada (151131). One contained the remains of walls, stones from collapsed buildings, and caves that once had been inhabited, and the other contained similar caves, rock-hewn cisterns, and an olive press.

According to the History of the War of Independence, the village was 'cleansed' by the Fourth Battalion of the Har'el Brigade on 16 July 1948. This probably means that any inhabitants who remained after the mortar barrages were summarily expelled by the occupying troops. A string of other villages in the area met the same fate. The maneuver was 'aimed at expanding the Jewish-held corridor to Jerusalem,' according to Israeli historian Benny Morris. The attacks fell under the umbrella of Operation Dani (see Abu al-Fadl, Ramla sub-disctrict).

The village had seen combat earlier, in the course of the battles for the Jerusalem corridor. As early as 18 March, a skirmish was fought on the village outskirts. 'Jewish sources' later told the New York Times that a Haganah armored car was stuck in the mud outside the village and that 250 Arab militiamen had attacked it, killing its crew of 8. The following week, there was an attack by Palestinian militia forces commanded by 'Abd al-Qadir al-Husayni on the neighboring Jewish settlement of Hartuv. British forces intervened on 22 March and ended the firefight by firing 4 high-explosive shells (each weighing 25 pounds) and 16 smoke shells into the village of Ishwa'. The New York Times correspondent wrote that the residents, together with the Arab forces based in the village, were evacuated. The next day, some 600 British troops invaded Ishwa', as well as nearby 'Artuf and Bayt Mahsir. A Times dispatch said that almost all the villagers had already been evacuated before the British assault.

It is not mentioned what later transpired at the village, or whether the villagers later returned, although the Haganah's account of its occupation on 16 July implies that they did return, if only briefly. 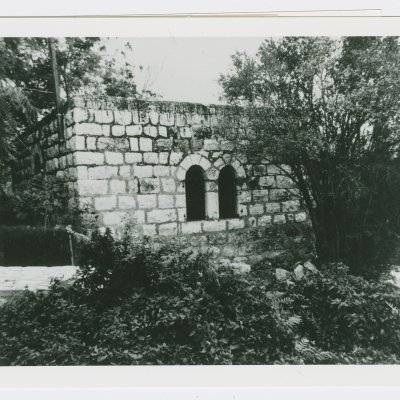 Israel established the settlement of Eshta'ol (150132) in 1949 on land belonging to Ishwa' and the village of 'Islin.

levelled and planted with grass. On the southern edge of the cemetery is a cave that contains the large grindstone of a flour mill. Olive and carob trees grow on the site, among other trees more recently planted by the settlers. At the western edge of the village is a soccer field. The walls and fallen roofs of destroyed houses can be seen at the edge of this field (see photo). 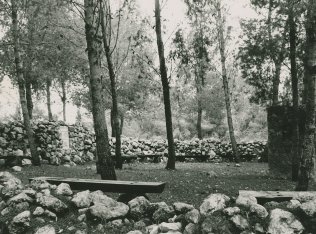 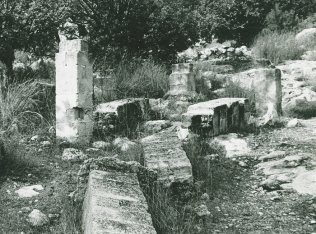 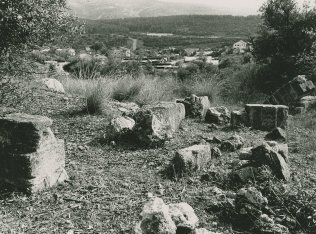 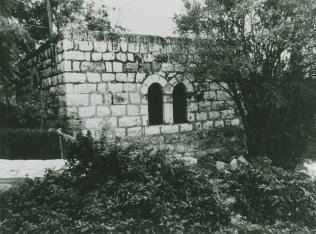 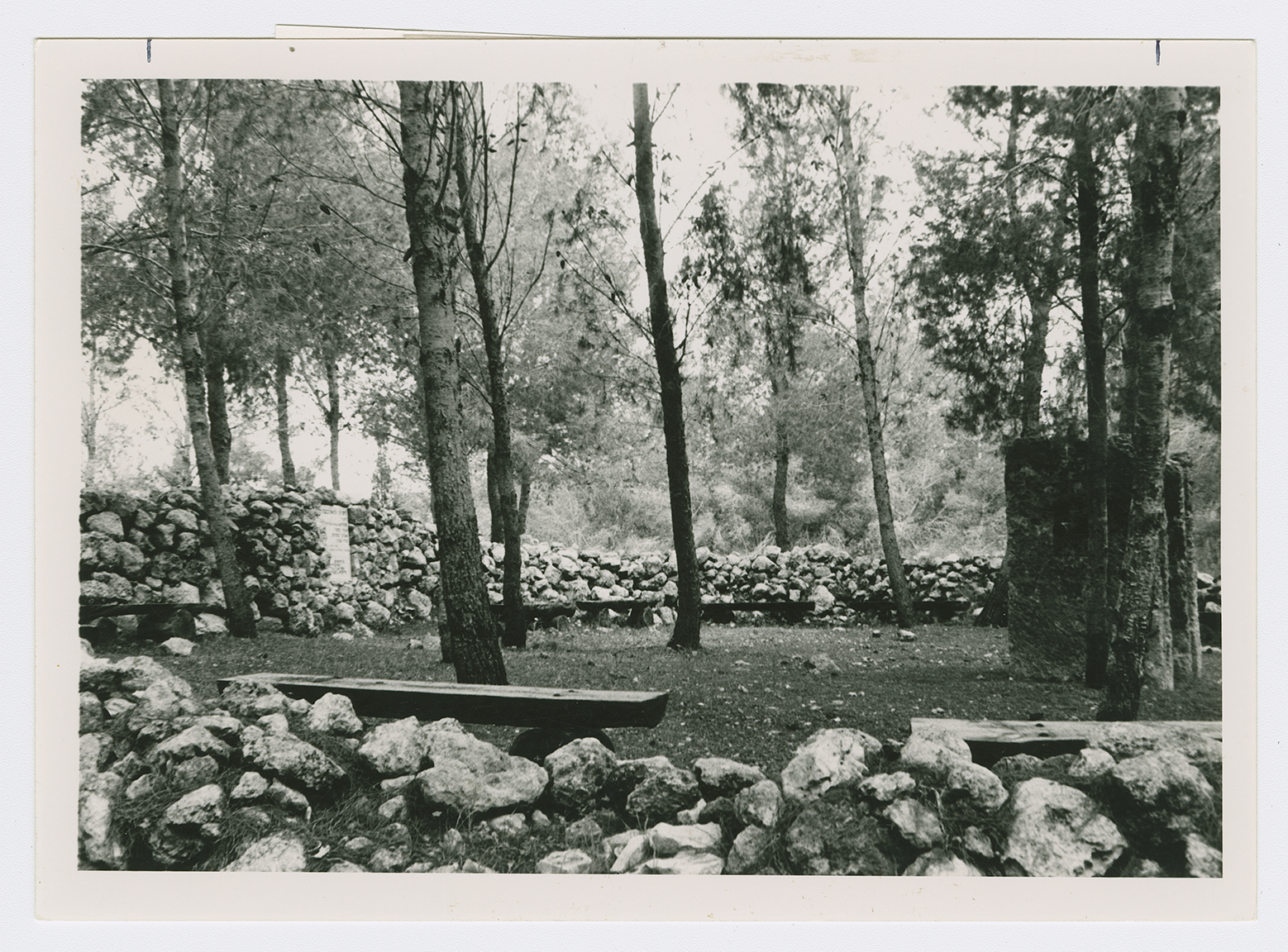 A park dedicated to the memory of Israeli soldiers killed in the 1982 war. 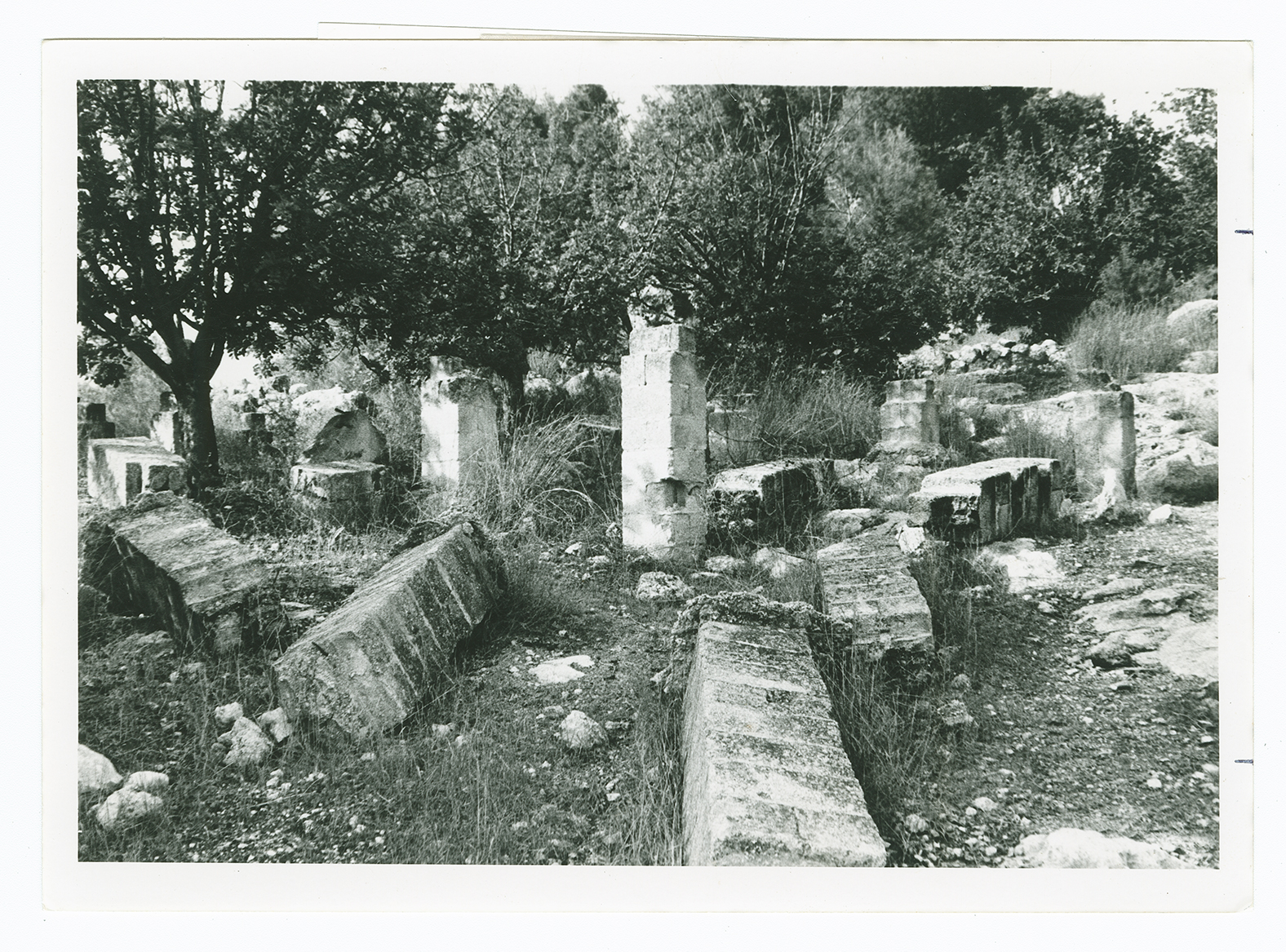 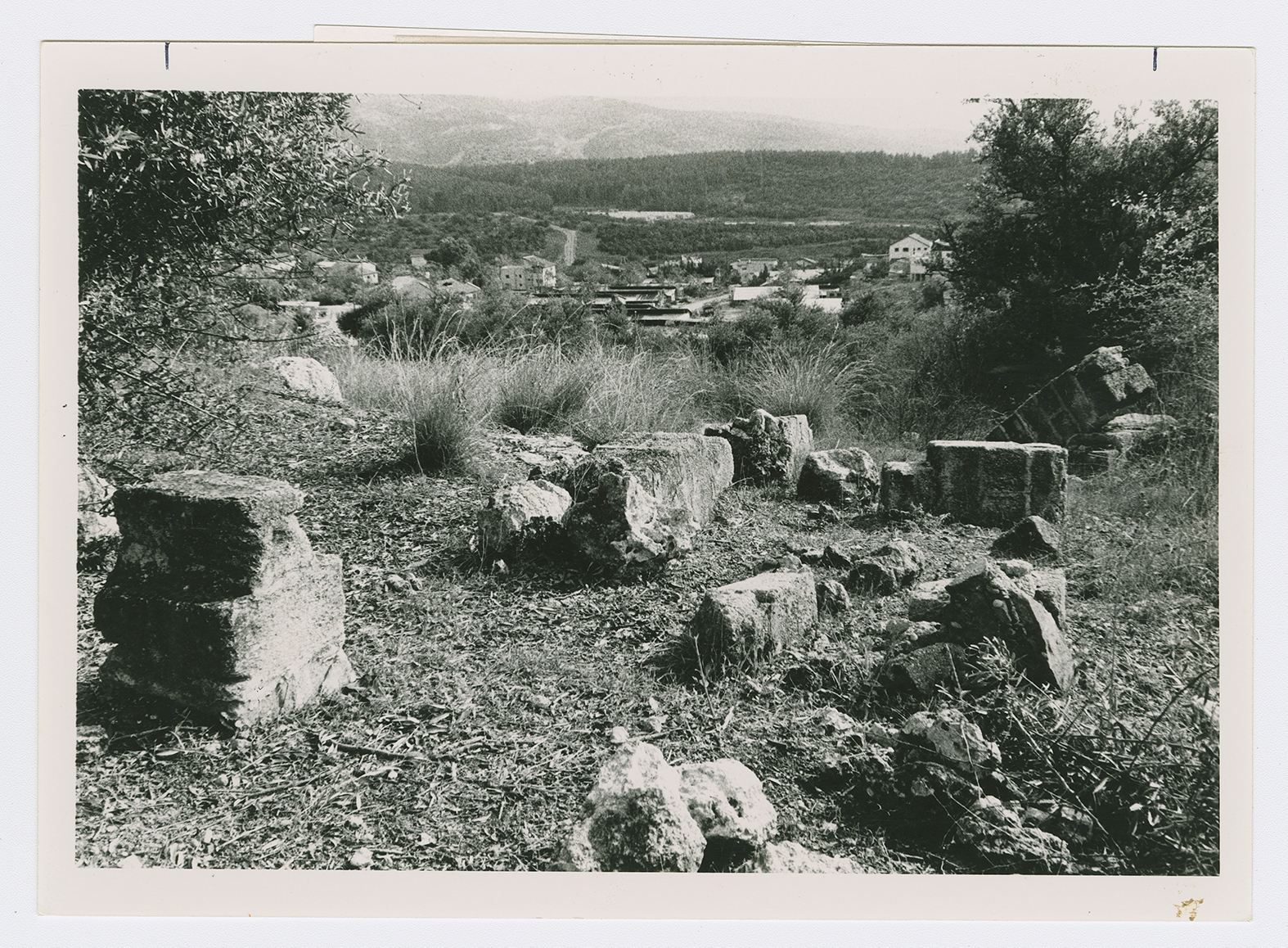 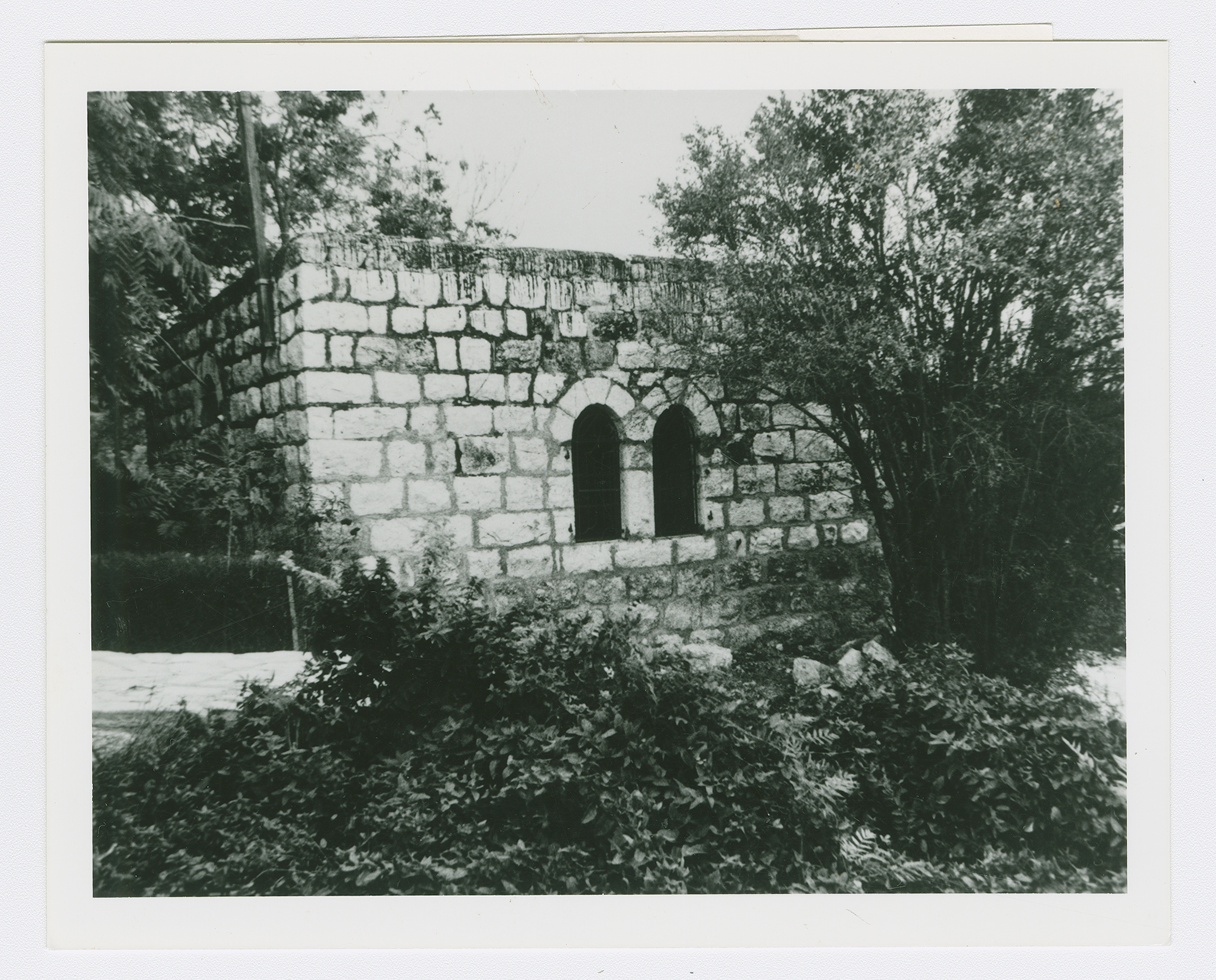 A village house now in the settlement of Eshta'ol.