The village stood on a mountain slope, facing southwest; Wadi Qalunya passed through its eastern edge. The village lay on the Jerusalem−Jaffa highway, and a dirt path linked it to neighboring villages. Qalunya is identified with the Canaanite town of Mozah (Joshua 18:26); its name was found stamped on pottery handles in Tall al-Nasba (171143). After A.D. 71 Vespasian settled 800 Roman soldiers in the town, which became a Roman settlement known as Colonia Amosa or Colonia Emmaus. The word colonia produced the Byzantine name, Koloneia, for the site. The status of the site in the early Islamic period has not been established, but the name was preserved in Crusader times as Qalonie or Qalunia and in Arabic as Qalunya. Mujir aI-Din al-Hanbali (d. 1522) reported that in 1192 it was a village near Jerusalem.

In 1596, Qalunya was a village in the nahiya of Jerusalem (liwa' of Jerusalem) with a population of 110. It paid taxes on a number of crops, including wheat, barley, and olives, as well as on other types of produce, such as goats, beehives, and molasses.

In the late nineteenth century, Qalunya was a moderate-sized village perched on the slope of a hill, 300 feet above a valley. Travelers reported that it had a 'modern' restaurant. The villagers tended orange trees and lemon trees that were planted around a spring in the valley.

In 1859, Qalunya became the first location in the Palestinian countryside where Jewish immigrants acquired land for cultivation. Although a few settlers worked this land they did not live there on a regular basis until the early twentieth century, when a small settlement, Motza, was established.

Qalunya was circular in shape and the majority of its houses were built of stone. It was divided into several quarters that were separated by winding streets. More recent construction expanded first to the northwest and then to the south, with houses scattered along the Jerusalem−Jaffa highway. In the mid-1940s, the Arab population consisted of 900 Muslims and 10 Christians. The village mosque, named after a Shaykh Hamad, lay on the eastern side of the site. Qalunya had a few shops and an elementary school. The villagers drew their water from the springs around the site. Agriculture was both rainfed and irrigated; the lands were planted in grain, vegetables, and fruit trees, including olive trees, and vineyards. In 1944/45 a total of 846 dunums was allotted to cereals; 1,022 dunums were irrigated or used for orchards, of which 200 dunums were planted with olive trees. Archaeological remains in the village included the ruins of an arched building. Two khirbas north of the village contained the foundations of buildings and artificial caves carved into the rock.

Qalunya was one of the main targets of Operation Nachshon (see Bayt Naqquba, Jerusalem sub-disctrict). Palmach units attacked Qalunya on 11 April, according to the History of the Haganah. Israeli historian Benny Morris writes, and the Haganah account confirms, that the occupying units spent two days systematically razing its houses to the ground. The New York Times also reported that Haganah units occupied Qalunya on 11 April and that they 'blew up a score of houses and left the entire village ablaze.'

Israeli sources give differing accounts of how the village was depopulated. Morris claims that the villagers had already fled on 2 or 3 April as a result of an attack, but an Irgun Zvai Leumi broadcast stated at the time that the inhabitants of Qalunya had fled as a result of the Deir Yasin massacre on 9 April. The Times correspondent wrote that most villagers had been evacuated and the others were ordered out before the village was destroyed.

An eyewitness account by an Anglo-Jewish resident of Jerusalem, Harry Levin, who accompanied the Palmach force during the assault on 11 April is an interesting commentary on all of these claims. As he described the event, 'Suddenly the village seemed to erupt. Our mortars started it, and at once became a bedlam of answering fire ... They fired wildly to all points of the compass ... Suddenly an explosion that seemed to rip open the hillside; shrieks of terror. Our shock troops and sappers had reached the houses ... More explosions ... In half an hour it was over.' Levin counted fourteen dead 'but there were more.' When Levin left, 'sappers were blowing up houses. One after another the solid stone buildings, some built in elaborate city style, exploded and crashed…'

, to form a Jerusalem suburb called Mevasseret Tziyyon (164134). This suburb is northwest of the village site, largely on village land.

The settlement of Motza was built close to the village on land purchased by Jewish colonists in the 1850s. It was destroyed during fighting between Palestinians and Zionist settlers in July 1929 and was rebuilt as Motza Tachtit (166133) in 1930. Three years later, the settlement of Motza 'Illit (165133) was established nearby. Both were abandoned during the war of 1948 but were later repopulated; they are now suburbs of Jerusalem and are close to, but not on, the village lands.

Only a few houses still stand, in the southwestern part of the site, by the cemetery. They have arched doors and windows. One of the houses is now occupied by a Jewish family. Stone rubble, parts of collapsed cement roofs, and iron window frames are scattered throughout the site. An old synagogue, built in 1871, still stands; it has arched gates and windows. The wild grass that grows on the site is burned off every year to clear the approaches to the nearby settlement. The village terraces have been preserved. Almond, fig, and olive trees, along with cactuses, grow on the terraces and along the bottom of the slope. 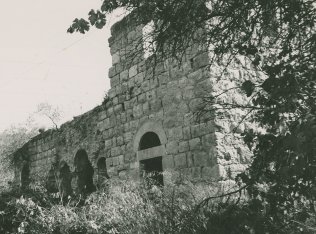 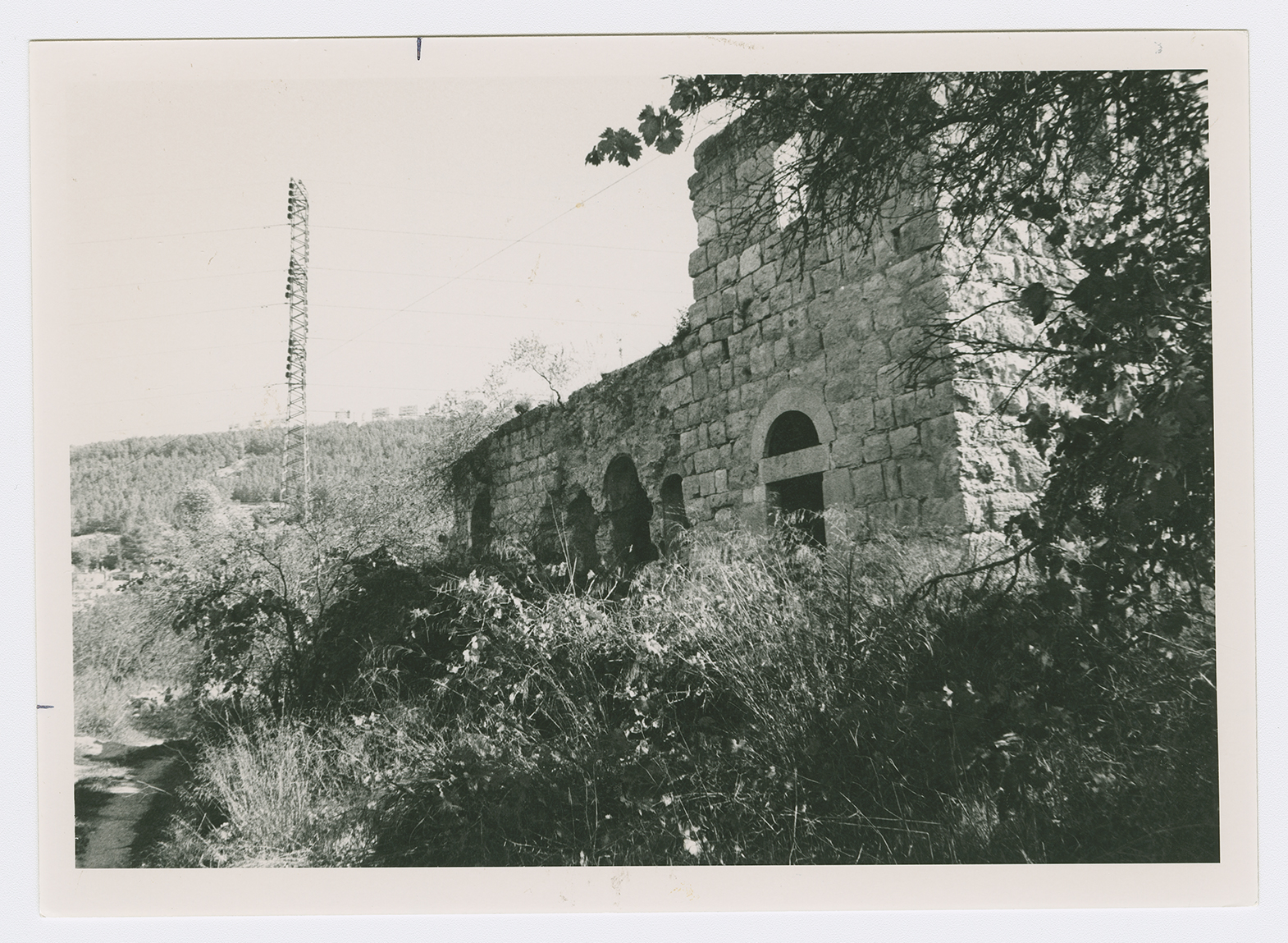 Remains of a stone house on the village site.