The village stood on a mountain top and overlooked other mountains on all sides. A 3-km-Iong secondary road linked it to the Jerusalem−Jaffa highway to the north, and dirt paths connected it to a group of nearby villages. Suba has been identified with the ancient town Rabba; it was called Rubute in the Egyptian Amarna letters. Excavations at the site, however, indicate that it was first inhabited during the Persian and Hellenistic periods.

During Roman times the Jews living in the area called it Seboim, while the Greco-Roman name for it was Soba (or Sobetha). The status of the site during the early Muslim period has yet to be established. The Crusaders established a fortress on the village site, which they named Belmont. In 1596, Suba was a village in the nahiya of Jerusalem (liwa' of Jerusalem) with a population of 369. It paid taxes on a number of crops, including wheat, barley, and olives, as well as on other types of property, such as goats, beehives, and molasses.

In the mid-nineteenth century Suba was controlled by the powerful Abu Ghawsh family, who dominated the area from their nearby home village of Qaryat al-'Inab (160135). They constructed a fort in Suba within the walls of the Crusader fortress. Their fort, and the walls of the Crusader fortress as well, was destroyed by the Egyptian general, Ibrahim Pasha, during his foray into Palestine in 1832. In the late nineteenth century, Suba was a moderate-sized village built of stone and situated on the top of a steep, conical hill. Surrounded by olive groves and vineyards, the village contained one unusually high, centrally-located house, as well as the remains of the Crusader fortress.

The village's stone houses were originally clustered together in a small area within the bailey of the Crusader fortress. Later, new houses were constructed to the south along the road that led to the Jerusalem−Jaffa highway, thus giving the village a rectangular layout. The people of Suba were Muslims, and they maintained a shrine for a Shaykh Ibrahim to the south of the site.

The most important crops were grain, which was planted in the valley floors, and fruit and olives, which were planted on the mountain slopes. Olive trees covered 150 dunums. In 1944/45 a total of 712 dunums was planted in cereals; 1,435 dunums were irrigated or used for orchards, 150 dunums of which for olive trees. There were several springs in the vicinity of the village which supplied water for domestic use and irrigation.

According to the Palestinian newspaper Filastin, Suba was attacked on 3 April 1948, after an attack on nearby al-Qastal. Despite aerial support, the Haganah were driven back and the village remained unoccupied for three months. Two unsuccessful attempts to conquer it were made in mid-April during the course of the battles around al-Latrun. It eventually was occupied by the Har'el Brigade during the night of 12−13 July 1948, in the course of Operation Dani (see Abu al-Fadl, Ramla sub-disctrict). According to the History of the War of Independence, Israeli forces used two companies backed by artillery and mortar support to take the village, which was built on an 'elevation with steep edges.' The account states that it was captured 'in order to eliminate the threat to the Jerusalem road from the south and to widen the [Jerusalem] corridor southwards.' The Associated Press reported that 'Suba was taken by Palmach storm troops without combat after a bombardment that drove the Arab defenders from a height above the vital road to Tel Aviv.' Israeli historian Benny Morris relates that much of the population of Suba had left earlier, and that the remaining residents either left as a result of bombardment or were expelled. An Israeli military spokesman was quoted in the New York Times as saying that the attack on the village was 'bloodless' and that its seizure had put an end to the Arab dream of cutting the road to Tel Aviv. The occupation of the village fell on the heels of the capture of Lydda and Ramla and the expulsion of their populations.

A settlement called Ameilim was established in 1948, 1 km southwest of the site, on village lands; it later was renamed Kibbutz Tzova (161132). A school called Yedida (160135) was built close by to the northwest in 1964, on lands that traditionally belonged to the village of Abu Ghawsh.

Many of the village buildings still stand; some have walls missing or are without roofs. Arched doorways and gates define the facades of these houses (see photo). A number of houses, however, are almost completely destroyed, with only the bases of their walls still standing. At an archaeological site that was recently excavated, a large stone gate and walls were unearthed. The remnants of the Crusader fortress are present on the site. Fig, almond, and cypress trees, together with cactuses, grow on the terraces around the lower approaches to the mountain. The village cemetery is located on the southern base of the mountain. Networks of trenches dug by the Israeli army are visible on the northeastern side of the mountain top, and a water reservoir with a pipe leading down the northern slope of the mountain has been constructed. 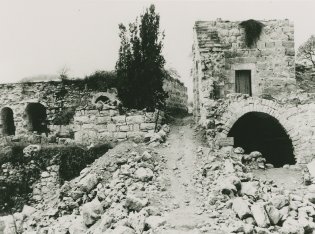 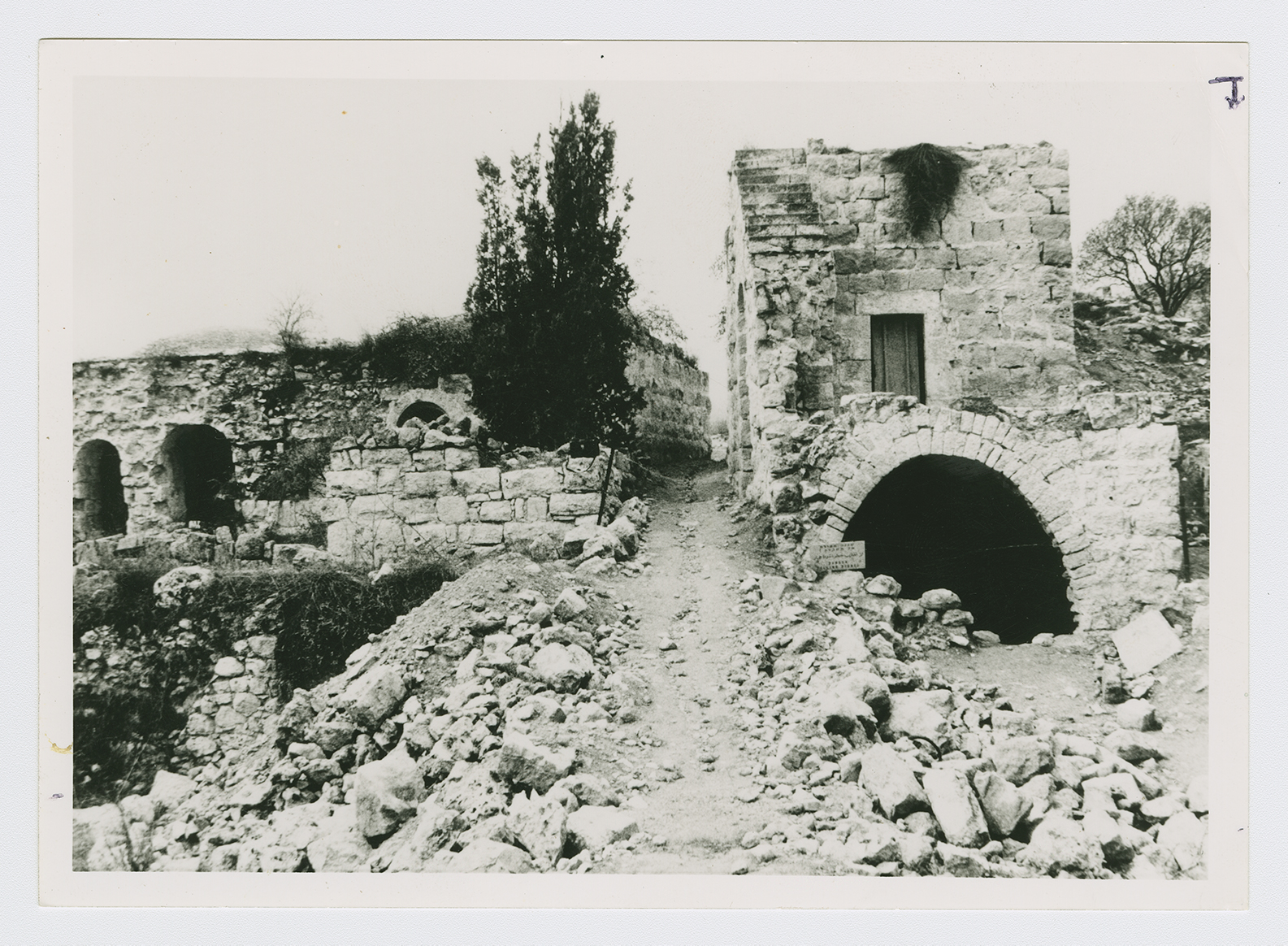 The ruins of deserted houses and rubble scattered over the village site.