The village was located on the coastal plain, about 7.5 km east of the Mediterranean. It was the central node in a transportation network linking the south and the mid-west of Palestine, served by a train station on the Gaza-Lydda railroad, and by the Gaza-Jaffa highway, which passed through the village.

Literary sources provide a reasonably detailed record of the early history of Yibna. It appears in the Bible with the name Jabneel (2 Chronicles 26:6-8) and seems to have been a Philistine town. During Hellenistic times it was both a military and administrative center for the region. Although there is debate about which of the Hasmoneans destroyed the city, it was under their control when the Romans occupied Palestine in 63 B.C. They referred to the town as Jamnia (Iamnia). Gabinius, the governor of Syria (which included Palestine) ordered the town rebuilt. During the reign of Augustus, the village was presented as a gift to Herod the Great, the Romans' client-king of Palestine. It flourished during this period and became the center of a sub-disctrict whose port was larger than Jaffa's. After the Romans sacked Jerusalem in A.D. 70, the Jews transferred their religious council, the Sanhedrin, to Yibna. The Arabs conquered it under 'Amr ibn al-'As (d. A.D. 663), one of the most successful Islamic military leaders. Little is known about Yibna in the early Islamic period. It was mentioned subsequently by a number of Arab geographers and chroniclers. Al-Ya'qubi (d. A.D. 897) described it as one of the ancient cities of Palestine, located on a high hill and inhabited by Samaritans; al-Maqdisi, writing in A.D. 985, said that it had a gem of a mosque. Yaqut al-Hamawi (d. A.D. 1228) wrote in his Mu 'jam that it was 'a small town near Ramla that contained the tomb of one of the Prophet Muhammad's companions, whose identity was disputed.'

During the Crusades Yibna witnessed several battles which took place on the site between A.D. 1105 and A.D. 1123. In a major battle in A.D. 1123 the Crusaders defeated the Fatimids of Egypt. Later on, in A.D. 1141, they built a castle in Yibna and turned it into a strategic defensive position. After the battle of Hittin in A.D. 1187, however, it returned to Muslim hands. It was in Yibna that al-Zahir Baybars of Egypt received the news, in A.D. 1265, of the Muslim triumph over the Tartars in northern Syria. In 1596, Yibna was a village in the nahiya of Gaza (liwa' of Gaza) with a population of 710. It paid taxes on a number of crops (including wheat, barley, summer crops, sesame, and fruits), as well as on other types of produce and property, such as goats, beehives, and vineyards.

The American missionary, William Thomson, visited Yibna in 1834 and described it as a village situated on a hill, with about 3,000 Muslim residents who worked in agriculture. He also said that an inscription on the mosque of Yibna (probably the mosque described by al-Maqdisi) indicated that it was built in 1386.

In the late nineteenth century, Yibna was a large village partly built of stone and situated on a hill. It had olive trees and corn to the north, and gardens nearby.

Modern Yibna had four main streets, two that ran from east to west, and two that went from north to south. Its population was predominantly Muslim. There were two elementary schools, one for boys and one for girls. The boys' school was founded in 1921 and had an enrollment of 445 students in 1941-42. The girls' school was founded in 1943 and by 1948, had an enrollment of 44 students. Due to its proximity to the sea, Yibna contained many springs and wells. Citrus was the most important crop. In 1944/45 a total of 6,468 dunums was devoted to citrus and bananas and 15,124 dunums were allotted to cereals; 11,091 dunums were irrigated or used for orchards, of which 25 dunums were planted with olive trees.

The village was a bone of contention between Egyptian and Israeli forces in the first week of June 1948. An Israeli military communiqué, quoted by the Associated Press on 1 June, stated that there was an Egyptian advance unit at Yibna. However, Israeli historian Benny Morris notes that the village was occupied by Israeli forces on 4 June, during the second stage of Operation Barak (see al-Batani al-Gharbi, Gaza sub-disctrict). Quoting military sources, Morris writes: 'After mortaring and a brief fight, the units entered the village, which they found deserted ‘save for some old Arab men and women,’ who were sent packing.' This account does not quite agree with the version given by the History of the War of Independence, which puts the occupation a day later and gives the takeover a different emphasis:

The Arab village of Yivna [sic], which the Egyptian forces had not reached, was struck with fear upon seeing our [troop] concentrations and its inhabitants abandoned it and, on the night of [June] 4-5, it fell into our hands without fighting.

The New York Times reported a 5 June attack by Egyptian forces on Yibna, 'now held by the Israelis,' but wire services reported that Yibna had been 'recaptured' by Israeli forces that same day.

The United Press (UP) gave yet another version of the occupation of the village, significantly different from Israeli accounts. First, Israeli artillery began to hammer the hilltop village while commandos charged it behind mine-detector teams. 'At sunrise,' the account added, 'civilians could be seen fleeing from the town toward the coast without interference from the Israeli attackers.' Soon afterwards, Yibna yielded, and the Israeli commandos took over the strategic position dominating the coastal road. The UP dispatch stated that Yibna had been the last 'Arab fortress' between Tel Aviv and the front-line Egyptian outposts just north of Isdud.

A railroad crosses the village. The dilapidated mosque and minaret, together with a shrine, still remain. At least two of the remaining houses are used by Jewish families and one by an Arab family. One of the houses occupied by Jews is made of concrete; from its flat roof rise an electricity-post and a TV antenna. The other has a gabled roof. The house in which the Arab family lives is quite small and deteriorating; it has a tiled, slanted roof. Nearby is a nonfunctioning well with a circular mouth. A half-cylindrical stone structure is built on a segment of the well and is enclosed by a stone wall at one end. 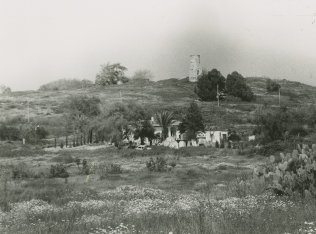 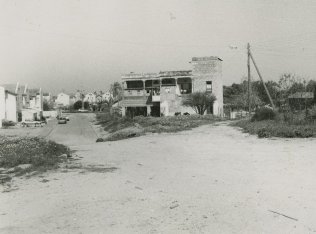 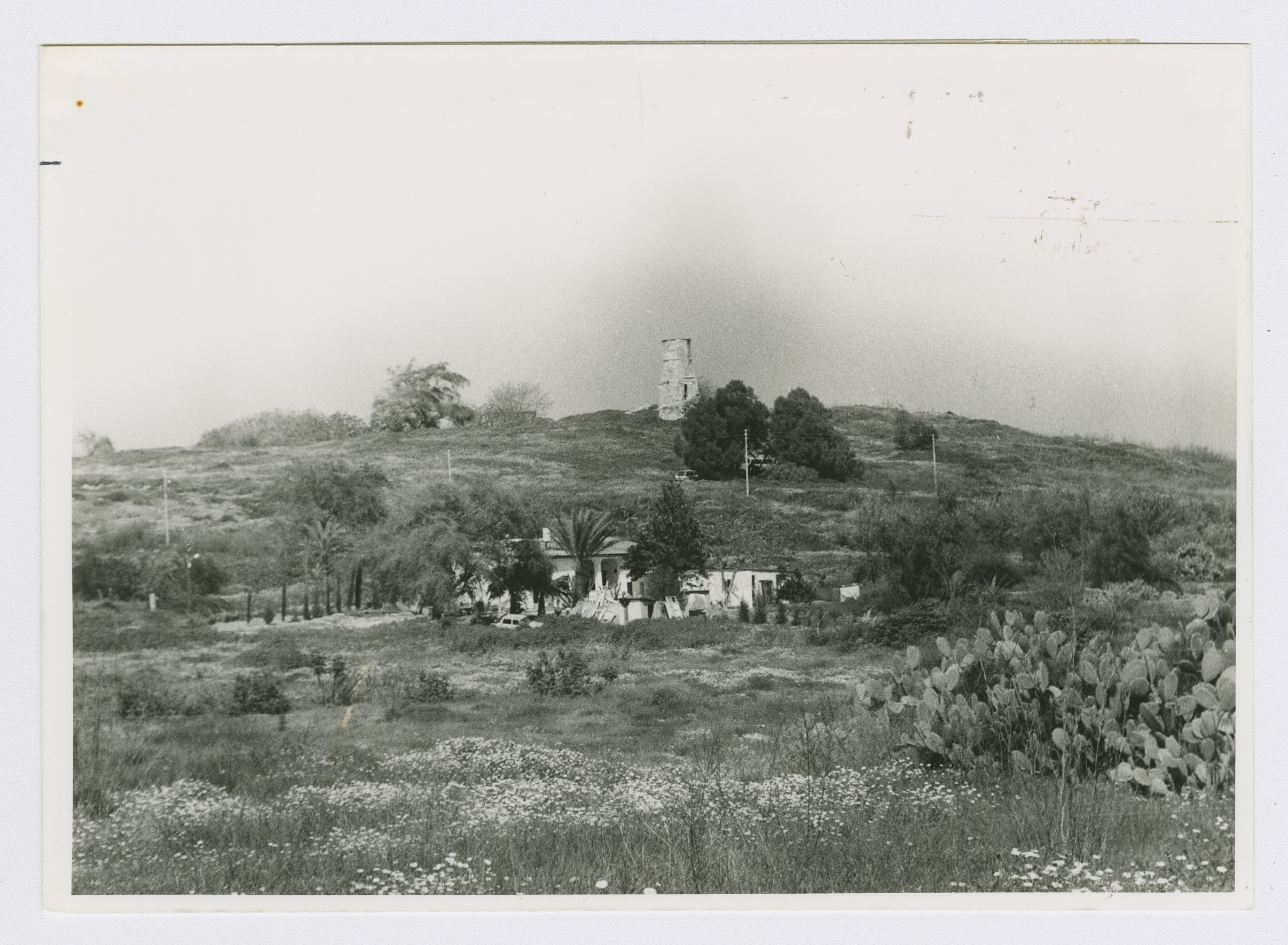 General view of the site from the south looking north. The ruins of Yibna's mosque appear on the horizon; Israeli houses are in the foreground. 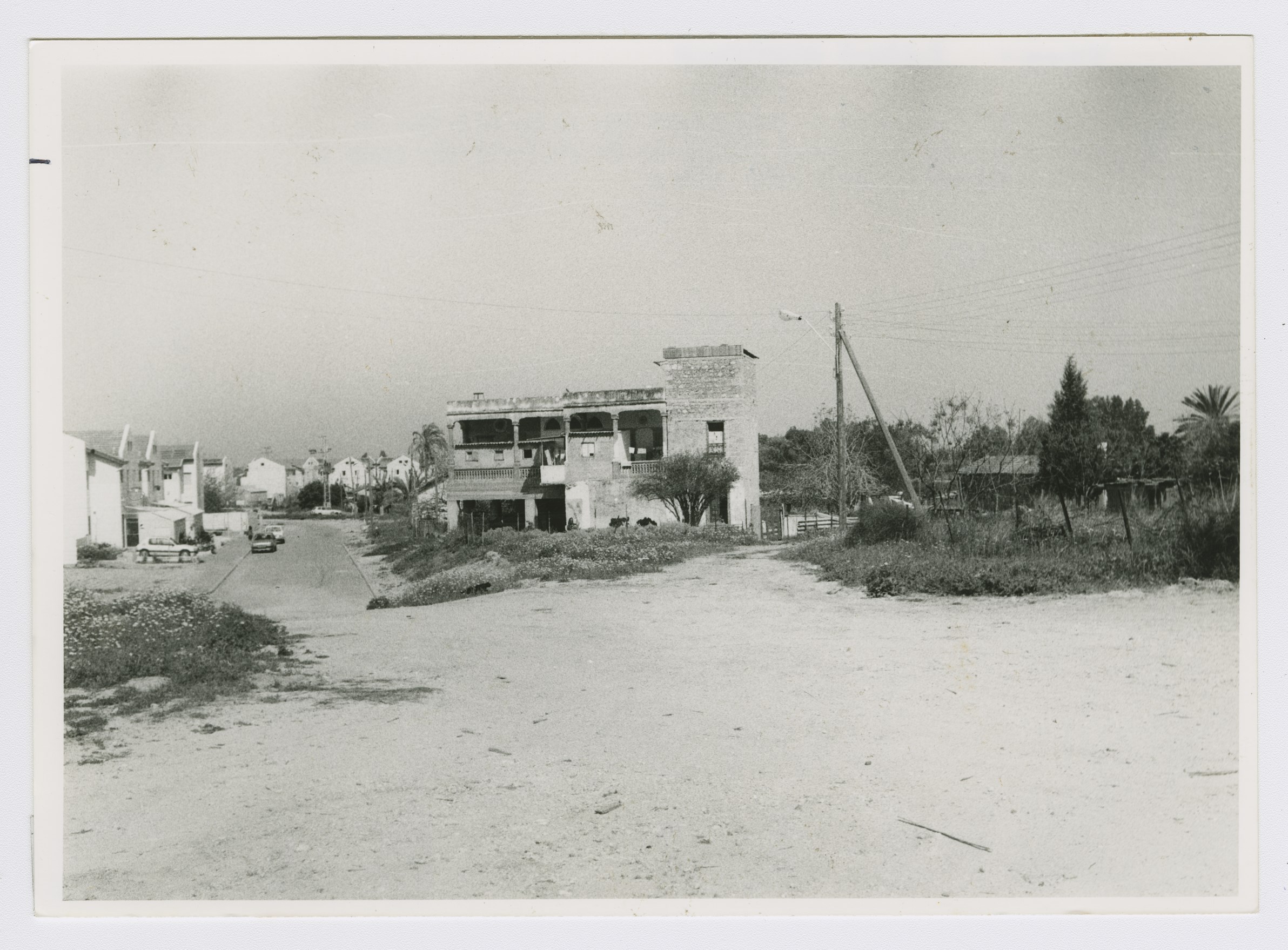 A village house on the northern edge of the site that is occupied by a Jewish family; new Israeli buildings appear on the left.