The village was situated on hilly terrain on the coastal plain and was initially bordered by Wadi al-Faluja on the east, north, and west. The wadi was deep and gave the village a defensive advantage. Al-Faluja was the hub of a network of highways leading to Hebron, Jerusalem, Jaffa, Gaza, and other sub-disctricts. According to the villagers, al-Faluja was founded on a site that had been known as Zurayq al-Khandaq. 'Zurayq' means blue in Arabic and is the vernacular name for a leguminous plant with blue flowers, turmus (lupine), which grew around the site. The name was changed to al-Faluja to commemorate a Sufi master, Shahab al-Din al-Faluji, who came to Palestine from Iraq early in the fourteenth century, settled near the site, and was buried there (see also Bayt Affa, Gaza subistrict).

The Arab geographer al-Bakri al-Siddiqi, who journeyed through Palestine in the mid-eighteenth century, visited the tomb of Shaykh al-Faluji after passing through Bayt Jibrin.

In the late nineteenth century, the village of al-Faluja was surrounded on three sides by a wadi; it had two wells and a pool to the east, a small garden patch to the west, and adobe brick houses.

The nucleus of the village was centered around the shrine of Shaykh al-Faluji. Its residential area began to expand in the 1930s and eventually crossed over to the other side of the wadi, which henceforth bisected the village into northern and southern sections. Bridges were constructed across the wadi to facilitate movement between the two sides, especially in winter when the watercourse often flooded and caused damage. The center of al-Faluja shifted to the north, where modern houses, stores, a clinic, and coffee shops were erected. It also had two schools, one for boys and another for girls; the first was opened in 1919 and the second in 1940. The boys' school had a plot of land for agricultural training and a hostel with accommodations for 25 students; it became a junior high school in 1947, when its enrollment reached 520. Eighty-three students were enrolled in the girl’s school in 1943.

The residents of al-Faluja were Muslims. They worshipped in a large mosque with three domed halls, one containing the tomb of Shaykh al-Faluji. The village also had several other minor shrines. The local council of the village was established in 1922. The council's revenues consistently exceeded its expenditures [which totaled 473 Palestinian pounds (£P) in 1929 and £PI0,076 in 1944], resulting in a steadily increasing budget.

The four wells that had supplied the villagers' domestic needs became insufficient after the village started to expand. On the eve of the war, the local council inaugurated a project for drawing water from a well near the village of Julis.

The inhabitants of al-Faluja were mainly employed in rainfed agriculture, growing grain, vegetables, and fruits. In 1944/45 a total of 36,590 dunums was allocated to cereals; 87 dunums were irrigated or used for orchards. Commerce represented the second most important economic activity. A weekly market, attended by merchants and shoppers from the region's villages and towns, was held between Wednesday noon and Thursday noon on a special site which the local council had equipped with the necessary facilities. In addition to agriculture and commerce, the villagers engaged in animal husbandry, poultry raising, grain milling, embroidery, weaving, and pottery. Al-Faluja had a renowned dyehouse that attracted customers from all over the region.

An early attack on al-Faluja was reported on 14 March 1948. Quoting Jewish sources, the New York Times said that a 'Jewish supply convoy' had engaged in a battle with villagers, as a result of which 37 Arabs and 7 Jews were killed, and 'scores' of Arabs and 3 Jews were wounded. The convoy, which was escorted by Haganah armored cars, reportedly had to fight its way through the village. But another Jewish group returned that same day with a Haganah demolition squad and blew up ten houses in al-Faluja, including the three-storey town hall. Two days later, the Associated Press confirmed that the buildings blasted included the municipal building and the post office. An earlier attack had been mentioned by the Palestinian newspaper Filastin the previous month, on 24 February; no details were given.

There the brigade held out until February 1949 when the 'Faluja pocket' was handed over to Israel as a result of the Israeli-Egyptian armistice agreement. However, Israel violated the terms of the agreement almost immediately, intimidating the population into leaving by 21 April 1949.

At the end of the war, an Egyptian brigade and some 3,140 Palestinian civilians were trapped in the 'Faluja pocket,' according to Israeli sources. When the enclave was handed over, Egyptian forces left, but only a small proportion of civilians chose to go. Within days, the local Israeli garrison engaged in beatings, robbings, and attempted rapes, according to United Nations observers at the scene.

Foreign Minister Moshe Sharrett personally reprimanded the Israeli army's chief of staff for the acts committed by the Israeli soldiers against the population. Sharrett said that in addition to overt violence, the Israeli army was busy conducting

a 'whispering propaganda' campaign among the Arabs, threatening them with attacks and acts of vengeance by the army, which the civilian authorities will be powerless to prevent. There is no doubt that there is a calculated action aimed at increasing the number of those going to the Hebron Hills as if of their own free will, and if possible, to bring about the evacuation of the whole civilian population of [the pocket].

Israeli historian Benny Morris writes that the decision to cause the exodus of the 'Faluja pocket' population was probably approved by Israeli prime minister David Ben-Gurion. Subsequently, Israeli officials feigned outrage at what had happened and misled the international community about Israeli actions. The director general of the Israeli Foreign Ministry, Walter Eytan, told U.S. Ambassador James McDonald that Israel had broadcast 'repeated reassuring notices' to the inhabitants to stay put; however, they acted 'as if they smelled a rat' and abandoned their homes. Eytan said the Arab population was 'primitive [and] rumour-ridden.'

Later, al-Faluja served as a cautionary example for populations in other areas of Palestine (mainly Galilee) where the Israeli authorities hoped to achieve the same result during 1949, but had less success.

The foundations of the village mosque and insubstantial fragments of its walls are all that remain of al-Faluja; debris is piled or scattered at the mosque's location. A dilapidated well and a cistern are visible. A stand of eucalyptus trees, cactuses, and Christ's-thorn and olive trees also grow on the site. Israeli government offices and an airport have been built on the surrounding land, much of which has been cultivated. 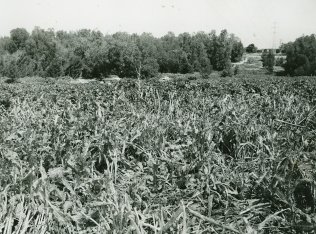 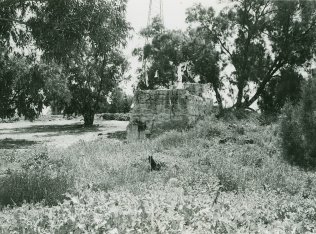 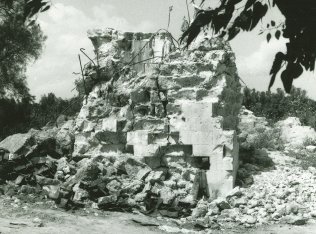 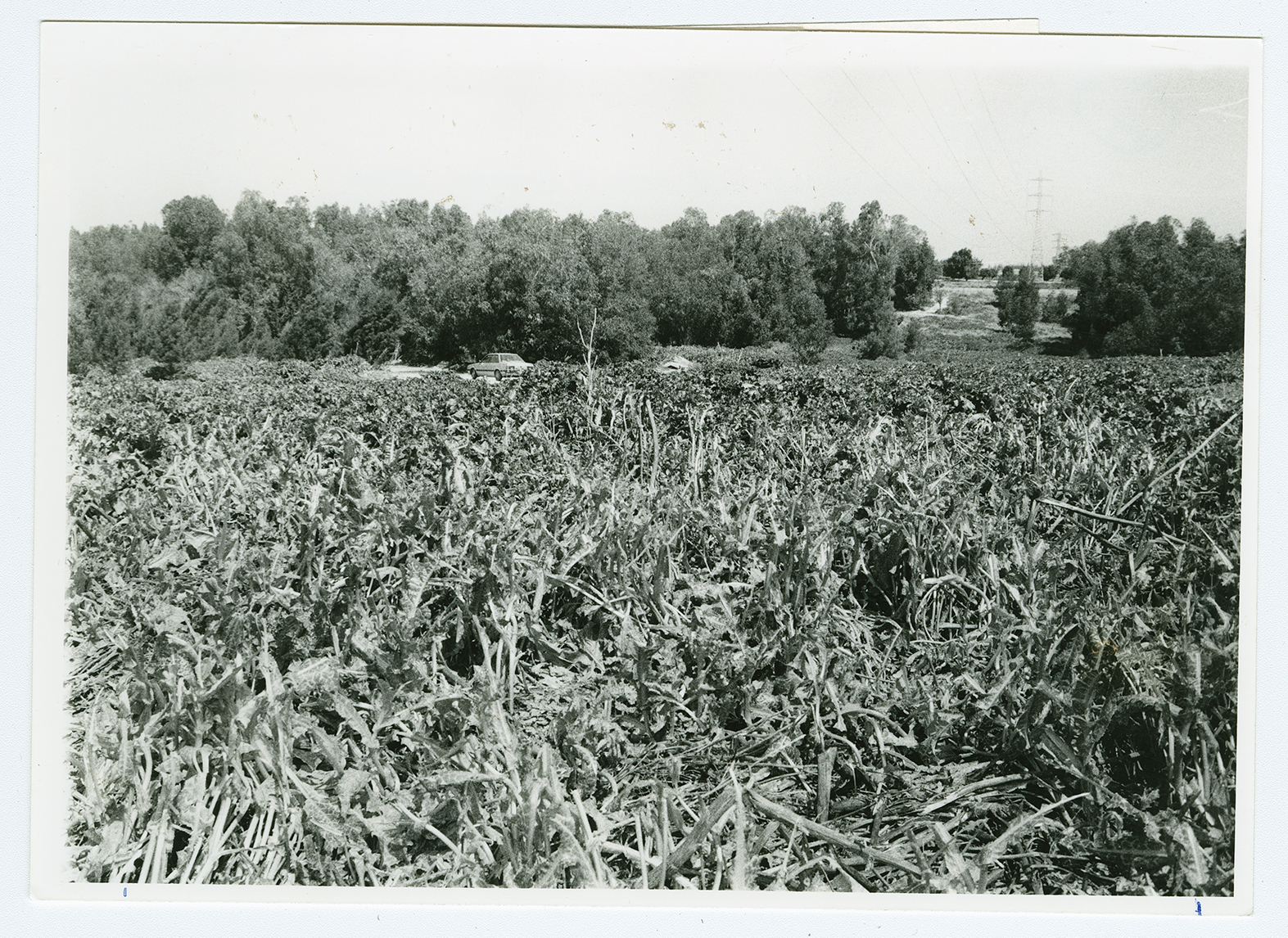 View from the high, level center of al-Faluja, looking north, showing cypress trees planted around the periphery of the site. 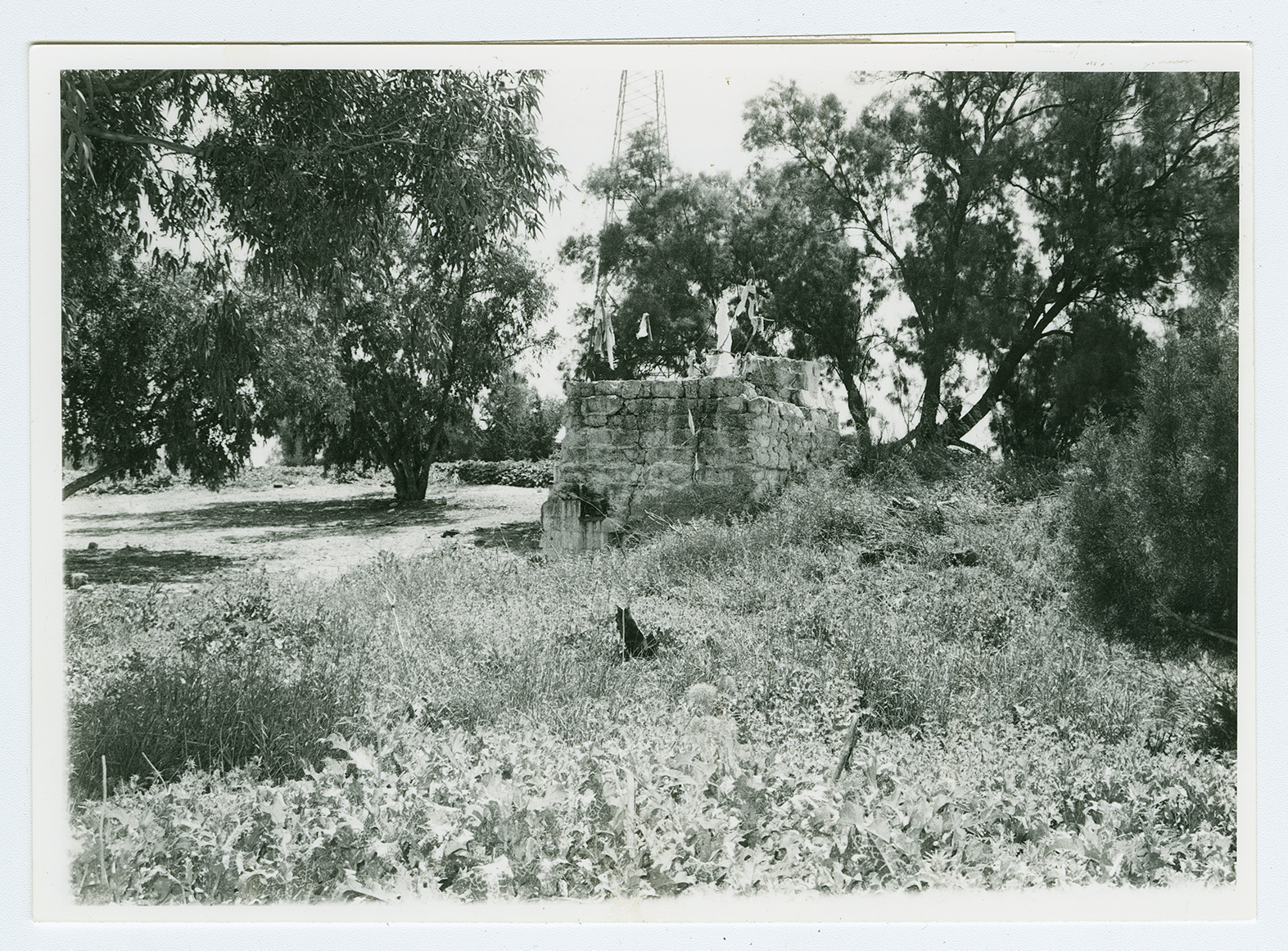 Remains of the tomb of Ahmad as-Faluji and the mosque attached to it, on the western edge of the site, viewed from the east. Visitors continue to hang strips of cloth on the tomb as tokens of their homage to the saint. 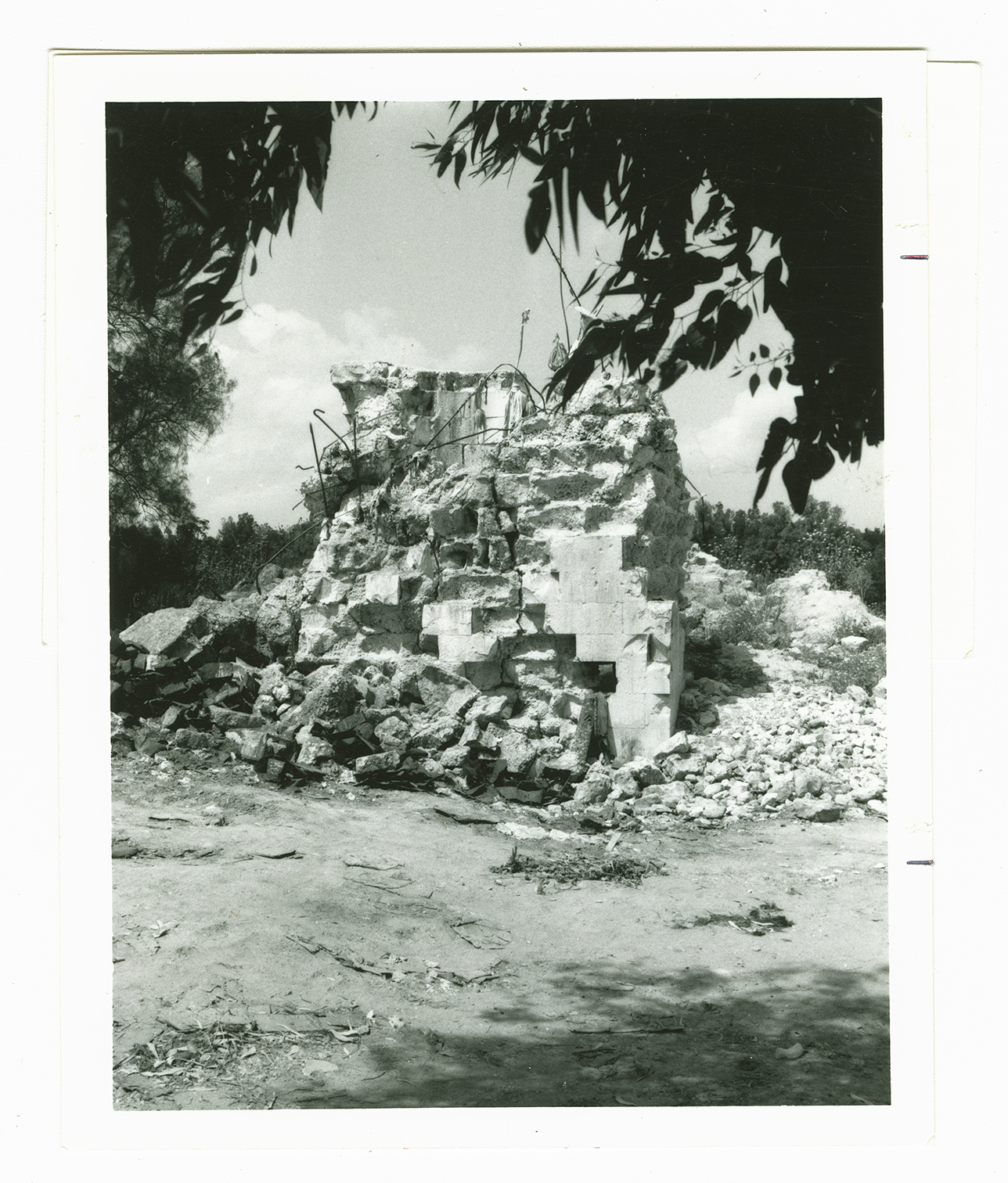 Remains of the shrine and mosque of Ahmad al-Faluji in al-Faluja.