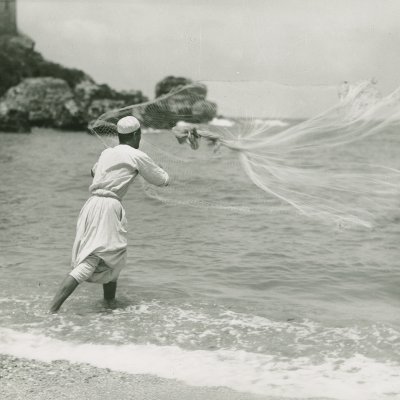 The village was situated on the seacoast inside the wellbuilt ruins of an ancient port city, originally called Strato's Tower. Qisarya is an Arabized form of Caesarea, the name of the Roman successor to Strato's Tower. This first city was established by Strato, ruler of Sidon in the late fourth century B.C., as a Phoenician trading colony. Herod the Great (d. 4 B.C.) built the town he named Caesarea (after his patron, Augustus Caesar) between 22 and 10 B.C. It developed into a prosperous harbor under the Romans and remained so under the Byzantines. (Recent underwater excavations of the harbor have shown it to be a masterpiece of marine construction.) It was the site of the first non-Jewish convert to Christianity (Acts 10). Already in the third century it was a center of Christian scholarship, thanks to the presence and library of Origin (d. ca. A.D. 254). It was Eusebius of Caesarea (4th century A.D.) who produced the first useful list of town names for Palestine, known as the Onomasticon.

Caesarea passed into the hands of the Arabs around A.D. 640 and received ample attention from Arab and Muslim geographers and chroniclers. Al-Ya'qubi (d. A.D. 897) said that it was the last city taken in the Arab conquest.

Nasir Khusraw, writing in 1047, described it as a pretty town with streams, palm trees, a handsome mosque from which worshippers could enjoy a view of the sea, and a formidable wall.

The town was also the home of a number of renowned Arab figures, especially Abd al-Hamid al-Katib (d. A.D. 750), the celebrated rhetorician and belle lettrist.

The fortunes of Qisarya appear to have dwindled subsequently, however. Yaqut al-Hamawi (d. 1228) reported that it was more like a village than a town.

The Crusaders pillaged it at first, then built a harbor and made the town the seat of an archbishop, until it was captured and leveled in 1265 by the Mamluk sultan Baybars (1233-77).

Qisarya only recovered in 1878 when Muslims from Bosnia settled in it after escaping the Austrian occupation of their country. Oliphant, an English Zionist activist and mystic, said that five months after their arrival the Bosnian immigrants had built twenty stone houses with vaults and storage compartments.

In 1945 Qisarya's Arab population was comprised of 930 Muslims and 30 Christians. The general outline of the village paralleled the shore, extending north to south. Its houses were made of stones mortared with either mud or cement; some of the Bedouin around Qisarya, however, lived in tents. The coastal highway ran about 4 km to the east. A boys' elementary school was founded in the village in about 1884, during Ottoman rule. The people of the village drew water for domestic use from several wells. Their economy was based on agriculture. In 1944/45 a total of 18 dunums was devoted to citrus and bananas and 1,020 dunums were allotted to cereals; 108 dunums were irrigated or used for orchards. Thanks to recent excavations many ruins of Caesarea are now visible. These include the high and low aqueducts of the city, the theater, parts of the city wall (from both the Roman and Byzantine periods), the hippodrome, storage vaults inside the harbor, and the later Crusader fortress.

Caesarea was the first pre-planned, organized expulsion of an Arab community by the Haganah in 1948,' according to Israeli historian Benny Morris. The village was captured by a Palmach unit on 15 February and the inhabitants 'fled or were ordered to leave,' although some had already left out of fear of attack. When twenty villagers insisted on remaining in their homes even after the village was captured, a Palmach unit destroyed the village houses on 20 February. The decision to destroy the houses was taken in early February during a Haganah General Staff meeting. But Morris claims that the houses were Jewish property leased by Arabs from the Palestine Jewish Colonization Association (PICA), and that the Palmach officer in command of operations, Yitzchaq (Yitzhak) Rabin, disagreed with the decision to destroy the village. An official of the left-wing Mapam party also objected, saying that the villagers had' done all in their power to keep peace in their village and around it...' Thirty houses were demolished; six were spared for lack of explosives. The demolition occurred in the general context of clearing the coastal plain north of Tel Aviv in the early months of 1948 (see Khirbat al-Shuna, Haifa sub-disctrict).

The kibbutz of Sedot Yam was established on what were traditionally village lands in 1940, 1 km south of the village site. Another settlement, Or 'Aqiva , was founded northeast of the village in 1951 it is now a small town with over 7,000 inhabitants and extends onto village lands. The Israeli rural locality of Qesarya was recognized by the Israeli government in 1977.

Most of the houses have been demolished. The site has been excavated in recent years, largely by Italian, American, and Israeli teams, and turned into a tourist area. Most of the few remaining houses are now restaurants, and the village mosque has been converted into a bar (see photos). 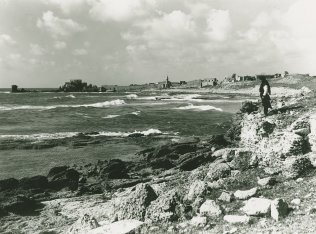 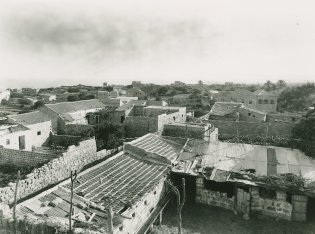 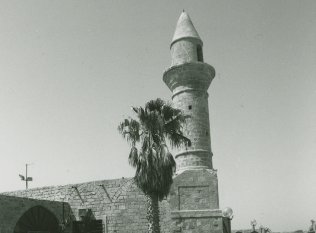 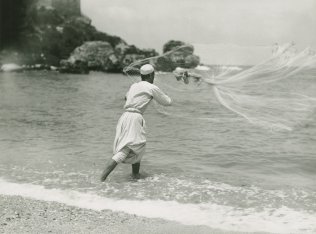 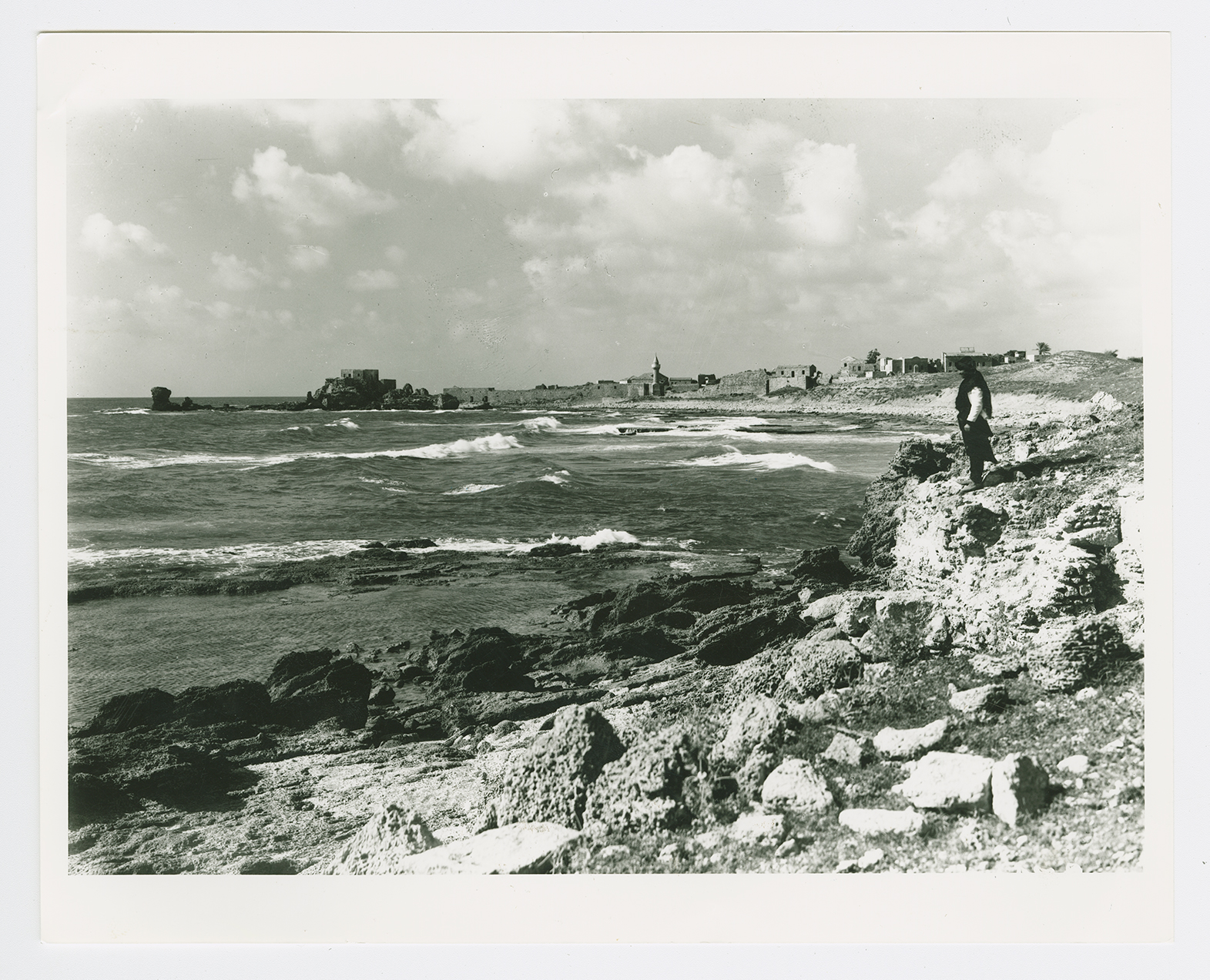 A general view of the southern part of Qisarya. 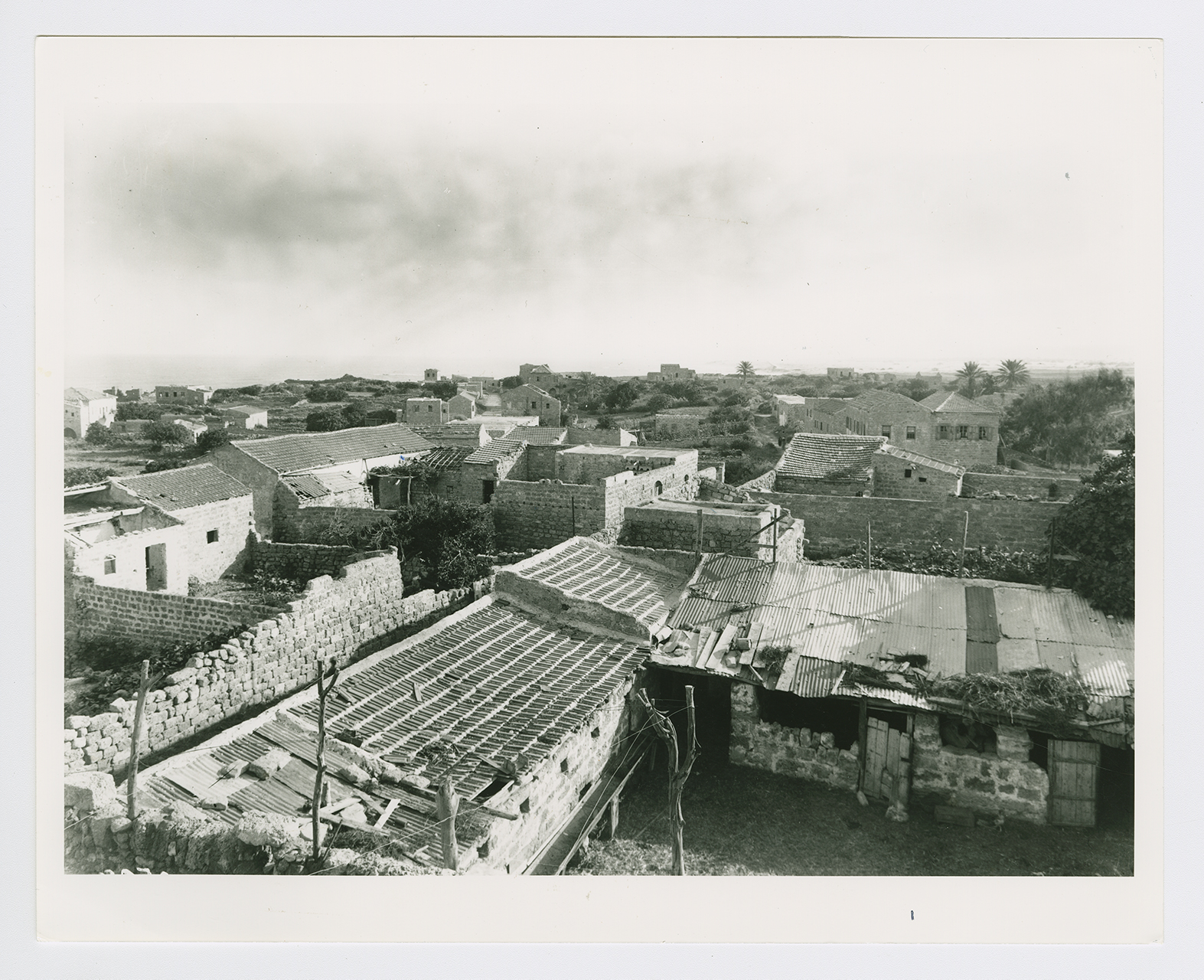 A general view of the village. 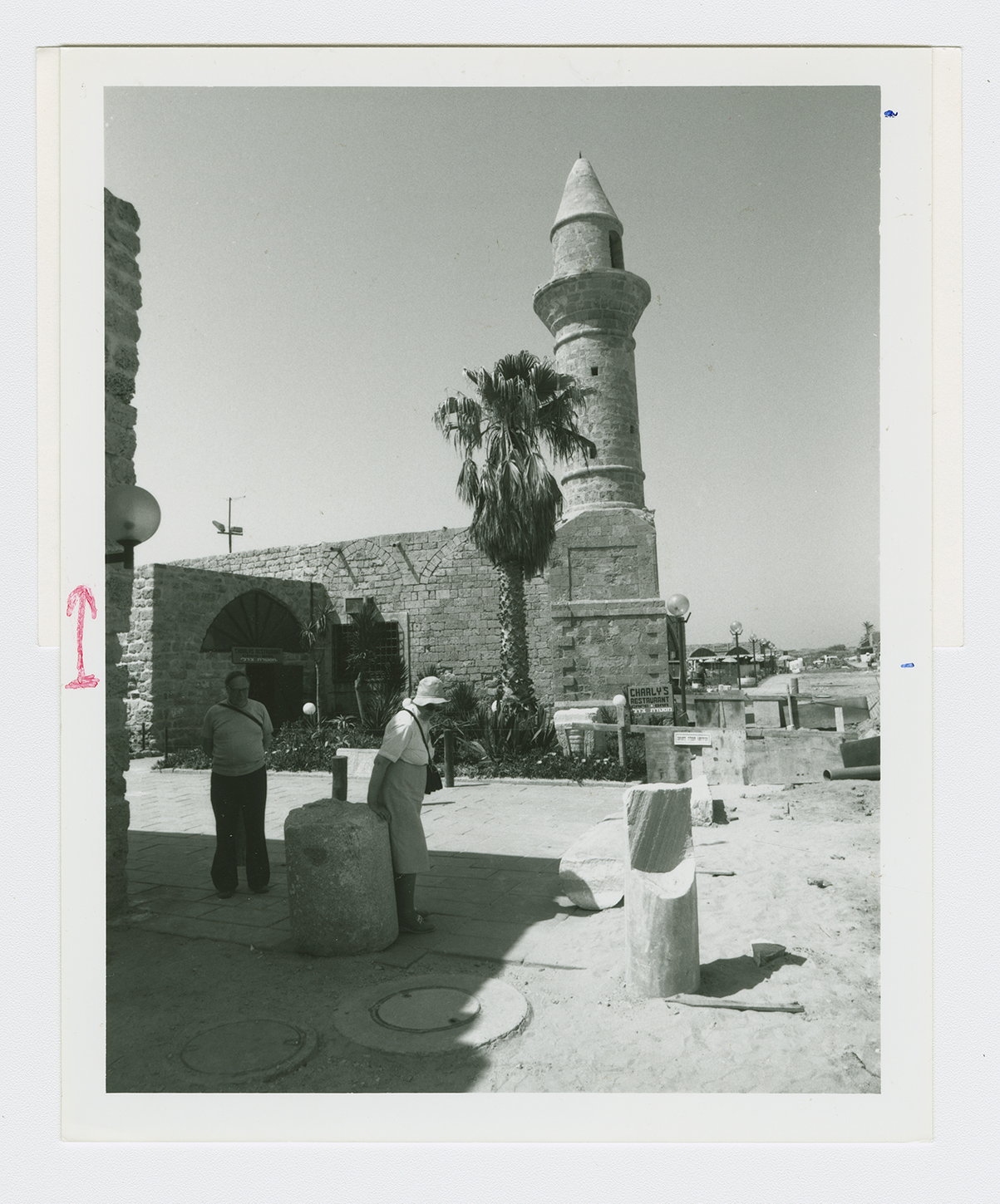 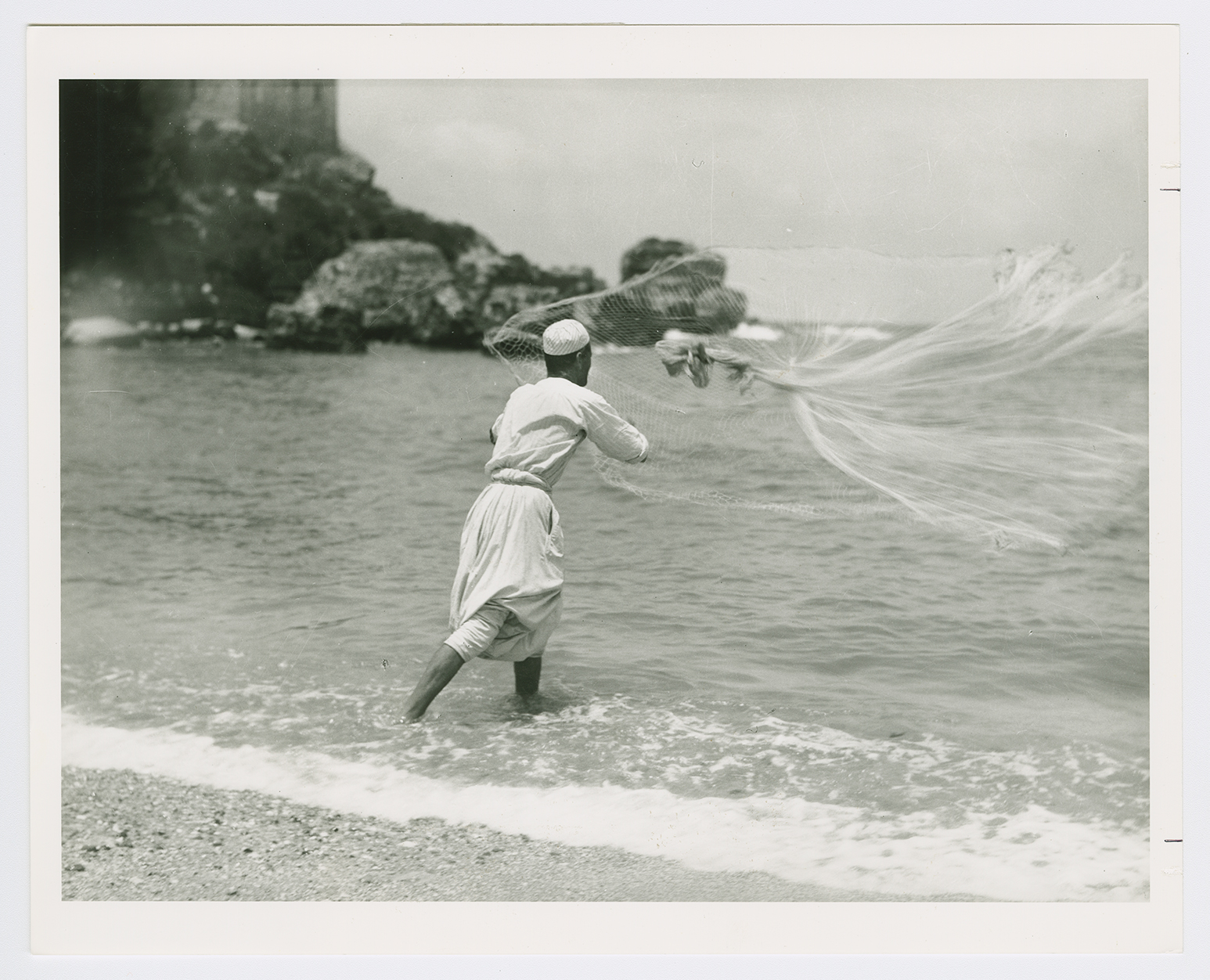