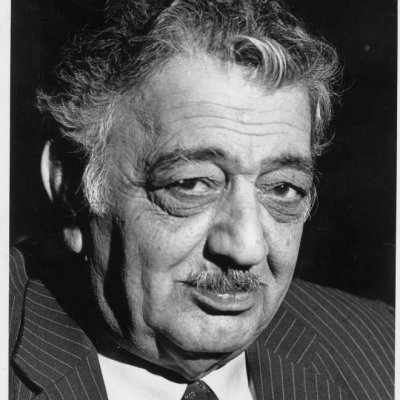 Emile Habibi was born in Haifa to a Protestant family. His father, Shukri, was originally from the town of Shafa Amr near Haifa. His mother was Warda Habibi. He and his wife, Nada, had two daughters, Rawiya and Juhaina, and one son, Salam.

He attended the Government Elementary School in Haifa and the Burj Secondary School in Acre. He completed his secondary school education at a Scottish missionary school called St. Luke’s in Haifa in 1939.

As a result of the Great Palestinian Rebellion in 1936–39, his political awareness began to grow and in 1940 he joined the Palestine Communist Party.

Habibi held many jobs. He worked for a time at the Haifa Oil Refinery and tried to pursue a degree by correspondence at London University. In 1940, he moved to Jerusalem to work as an announcer on Jerusalem Radio. In 1943 he resigned that job to devote himself to the party, becoming secretary of the Palestine Communist Party in Haifa.

He was a prominent member of the League of Arab Intellectuals founded in 1941 and contributed to its magazine, al-Ghadd.

In 1944, and following the split between Arabs and Jews inside the Communist Party of Mandate Palestine, Habibi was a founder of the National Liberation League in Palestine, which included in its membership most of the Arab communists in Palestine who had split from the existing Communist Party. In May 1944, he contributed to the founding of the weekly, al-Ittihad.

In 1946, he joined other Arab intellectuals in producing a weekly magazine called al-Mihmaz, which circulated widely in Palestine, Transjordan, and Iraq; it was short-lived.

During the Nakba of 1948, Habibi (who had been residing in Ramallah) was able to move back to Haifa, which the Israeli forces had already occupied. By the end of September 1948, he played a prominent role in getting the Arab members of the National Liberation League who had remained in what had become Israel to join the Israeli Communist Party.

Habibi represented the Israeli Communist Party in the Knesset between 1952 and 1972. In 1956 he moved from Haifa to Nazareth where he lived until his death.

Between 1972 and 1977, Habibi was editor of the weekly al-Ittihad, published in Arabic by the Communist Party and in which he wrote a weekly column signed “Juhaina.” He was also a member of the editorial board of the magazine al-Jadid.

The party leadership sent him to Prague in 1977 to represent the party on the editorial board of a magazine called Problems of Peace and Socialism, issued by communist parties; he remained there until 1980.

Upon his return, Habibi once again assumed editorship of the al-Ittihad, which he succeeded in transforming into a daily in 1983.

Habibi continued to hold party posts in the central committee and the political bureau and the editorship of al-Ittihad until a dispute broke out between him and his comrades in early 1989 on the position to be adopted regarding the policy of perestroika (restructuring) advocated by Soviet leader Mikhail Gorbachev, which Habibi strongly supported. As a result of this rift, a decision was taken to relieve him of his position as editor of al-Ittihad. Habibi responded on 8 May of the same year by resigning from all of his party posts. In August 1991, he announced his final withdrawal from the Israeli Communist Party and said he would devote himself to his literary work.

Between the 1940s and 1968, Habibi published several stories; his first novel The Sextet of the Six Days, published in 1968, aroused the interest of Arab authors and critics. He won wide renown in 1974 when his second novel The Strange Circumstances Surrounding the Disappearance of Sa‘id Abu’l Nahs, the Pessoptimist, which some critics considered “a rare literary achievement opening a new horizon for the Arab novel.”

In 1995, Habibi published a literary monthly called Masharif, which was published simultaneously in Haifa and Ramallah, affirming the unity between the two Palestinian cultural spheres.

Emile Habibi was awarded several Arab and international prizes and several decorations including the Jerusalem Medal for Culture, Arts and Literature by the PLO in 1990. Two years later, the Israeli government awarded him the Israel Prize in Literature at an official ceremony.  His acceptance of that prize caused a huge row in Palestinian and Arab cultural circles. Habibi donated the prize amount to the Palestinian Red Crescent Society to treat the wounded from the first Palestinian intifada.

In addition to his active political involvement in the Communist Party, Emile Habibi is considered among the most prominent Palestinian and Arab novelists. His literary works are distinguished by a sarcastic irony, which serves to protect the self from its own weakness. In both the Arabic and world literary traditions, Habibi found an endless source of inspiration. His works have been translated into many languages including Russian, English, French, German, and Hebrew. His novel, The Pessoptimist, which won sixth place in a classification of the best one hundred Arabic novels done by the Union of Arab Authors in Damascus, was translated into sixteen European and non-European languages. In 1991, Habibi was chosen as the most important author in the Arab world by the Arabic magazine al-Majalla, published in London.

Emile Habibi died in Nazareth and was buried in Haifa in accordance with his will; as he had instructed, his tombstone bore the words “I stayed in Haifa.”

The Haifa Municipality gave his name to a city square, and the Ramallah Municipality named a street after him. The Israeli producer Dalia Karpel produced a movie in 1997 called Emile Habibi: I Stayed in Haifa, and Arabesque Publishing House in Haifa issued his collected works in seven volumes. These collected volumes were also published in Beirut, Amman, and Ramallah through collaboration between Arabesque and Dar El Shorouk.

[The Sextet of Six Days]

[The Strange Circumstances Surrounding the Disappearance of Sa‘id Abu’l-Nahs, the Pessoptimist]

[Luka‘ son of Luka‘; Three Sessions in Front of the Magic Lantern]

[Daughter of the Ghoul]

[Towards a World without Cages]