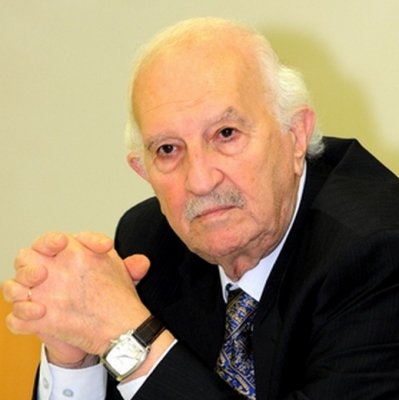 Hanna Abu Hanna was born to a Protestant family in the village of al-Rina in the district of Nazareth. His father, Amin, and his mother, Nabiha Zayid, had eight children: Hanna, Ibrahim, Samir, Emile, Nabil, Usama, Sawsan and Amira. Hanna and his wife, Samia Farah, had two daughters, Umayya and Rabab, and one son, Amin.

His father was a land surveyor during the British Mandate and the family moved with him from al-Rina to Asfia, to Jerusalem, to Ramallah and Jifna, and then to Ashdod in the south where he began his education in a traditional kuttab. The family then went to Haifa where he studied at an elementary school.

The family once again returned to al-Rina where he enrolled in the Latin Community School and then in the Government School in Nazareth. Having completed his studies there, he was selected to study at the Arab College in Jerusalem where he remained for four years (1943–47), at the end of which he passed both the Palestine Matriculation and the Intermediate exams and obtained his teaching diploma.

Upon his graduation, Abu Hanna began to compose poetry and publish his poems and other prose pieces in the magazines of Jerusalem, Haifa, and Beirut.

After he graduated from the Arab College, he was awarded a scholarship to continue his studies in Britain, beginning in autumn 1947. However, family circumstances forced him to postpone his travel for one year, and he taught at the Nazareth Secondary School.

After Nazareth fell to Zionist militias in 1948 and became part of Israel, travel to Britain was no longer viable, so Abu Hanna continued to teach at the Nazareth Secondary School. The same year he was among the founders of the Union of Democratic Youth in Nazareth, which soon joined ranks with the Union of Communist Youth once the Arab communists in the National Liberation League in Palestine joined the Israel Communist Party in October 1948.

Toward the end of 1948 Abu Hanna and Michel Dermelkonian (a composer of Armenian origin, and Palestinian by birth and passion; d. 2009) founded the Choir of Pioneers, which became one of the most important Arab musical groups in Israel. Abu Hanna wrote many of its songs and supervised its progress.

In 1949 he took part in the World Festival of Youth held in Budapest, Hungary, and in the conference of the International Union of Students held in Sofia, Bulgaria.

As a result of his political and party activity, Abu Hanna was arbitrarily dismissed from the teaching cadre so he devoted himself to political and party activities within the framework of the Communist Party. In 1950 he contributed to the Communist al-Ittihad newspaper, where he had a regular weekly column every Friday entitled “What days have inspired,” in which he published poetry or reflections on current events. In 1951 he was a member of the editorial board that issued the cultural monthly called al-Jadid and played a prominent role in organizing poetry festivals in Arab villages and towns and in encouraging young literary talent.

In May 1958, Abu Hanna was administratively detained for six months and shuttled to six Israeli camps and prisons. From his place of imprisonment he sent poems to be published in al-Ittihad and the two magazines al-Jadid and al-Ghadd.

In September 1959 he returned to teaching in the private sector and taught at the Orthodox Arab College in Haifa, teaching Arabic language and literature and world literature. At the same time, he continued his work on the editorial board of al-Jadid and in the early sixties he published a series of books issued by Dar al-Ittihad under the title “Selected Books.” The purpose was to publicize the works of the major Arab writers in the Arab world and in Israel.

In 1974, Abu Hanna was appointed headmaster of the Orthodox Arab College, which he strove to improve and develop culturally, educationally, and technically. He also lectured in the Arabic Department of Haifa University until 1993.

In 1984, he took part in founding a cultural magazine called al-Mawakib.

In 1987, Abu Hanna retired from his post at the head of the Orthodox Arab College and moved to teach at the Arab Teachers Training College in Haifa until 1995. He was also head of the Galilee Center for Social Research and, together with a number of Palestinian Arab intellectuals and men of letters in Israel, founded a literary and cultural magazine called Mawaqif.

Abu Hanna was appointed consultant to the committee established by the Department of Curricula of the Israeli Education Ministry, to prepare the curriculum of Arabic language and literature for Arab schools. Along with his colleagues, he succeeded in introducing specimens of Palestinian literature into the official Arabic language curriculum and was a member of several national cultural committees, including the Committee to Superintend Arab Education, which was part of the Arab local authorities. He was also a member of the administrative board of the Upcoming Theater and the Midan Theater in Haifa.

Hanna Abu Hanna is considered a mentor of several generations of Palestinian poets and men of letters who grew up in the new state of Israel and resisted the attempts of the Israeli authorities to marginalize them or uproot them from their homeland. The great Palestinian poet Mahmoud Darwish, who grew up in Israel, paid Abu Hanna the following tribute: “Hanna Abu Hanna taught us how a poem reflected its soil.”

Abu Hanna is noted for constant renewal and development of his poetry, which had its own flavor and its singular and beautiful diction. Despite his advanced age, he still takes vigorous part in political activities seeking to achieve the rights of the Palestinian people as well as in seminars and Arab poetical and literary events in Israel.

Hanna Abu Hanna has won many awards and prizes, including the Jerusalem Medal for Poetic Creativity (1991), the Palestine Prize for Autobiography (1999), the Mahmoud Darwish Prize for Freedom and Creativity (2013), and the Prize of Jerusalem, Permanent Capital of Arab Culture (2015). In 2005, a commemorative volume in his honor entitled Olive Tree of Galilee, edited by Butrus Abu Manneh and Johnny Mansour, was published in Nazareth.

[The Wounds Call out]

[I Swallowed Your Poison until I Became Immune]

[The Leaven of Ashes]

[The World of the Short Story]

[My Soul on the Palm of My Hand: Collected Poems of Abd al-Rahim Mahmoud]

[The Journey in Search of Tradition]

[The Memoirs of Najati Sidqi]

[Pioneers of Revival in Palestine: Graduates of the Russian Schools 1862–1914]

Greetings and Bread: An Anthology of Romanian Poetry. Haifa, 1953.

Toward an Autonomous Palestinian Field