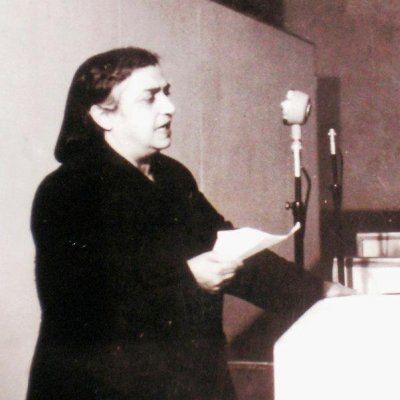 Birth of Sadhij Nassar in Haifa

Nassar Introduces a Regular Column in al-Karmel, "The Women's Section"

Death of Najib Nassar in Nazareth

Death of Sadhij Nassar in Damascus

Sadhij Nassar was born in Haifa. Her father, an Iranian by origin, was Shaykh Badi‘ullah Baha’i from Acre. She and her husband, Najib Nassar, had a son, Faruq. She studied at the Sisters of Nazareth School in Haifa and graduated from it.

Her professional life began in 1923 when she started writing articles in the al-Karmel newspaper founded in Haifa in 1908 by her husband Najib Nassar. She later helped him edit and run that newspaper.

In 1926 she began a section in that newspaper called “The Women’s Section,” which dealt with social issues; both men and women wrote articles for that section. In 1932, she ran two sections in that newspaper, one devoted to women’s issues and the other to social topics.

Sadhij Nassar’s articles about women were distinguished by their libertarian spirit. She encouraged Palestinian mothers to raise their children on the basis of equality between boys and girls, called for educating the Palestinian woman and providing her with work opportunities, and attacked dominant social ills in society. She also encouraged Palestinian women to engage in political life and to contribute to resisting British and Zionist colonialism.

In addition to her journalistic work, Nassar played a role in mobilizing and organizing Palestinian women. In 1930, and in collaboration with Mariam al-Khalil, she co-founded the Arab Women’s Union in Haifa, which played a prominent role in the General Strike of 1936. She also took part in the women’s demonstrations that accompanied that strike. Nassar was among the first to recognize the importance of organizing rural women and in getting them to join the national struggle. She worked hard to organize the women farmers of the Baysan district (among whom she lived for some time). Her efforts in this regard, however, proved unsuccessful.

Sadhij Nassar participated in several Arab women’s conferences and was a member of the Palestinian women’s delegation to the Eastern Women’s Congress for Palestine held in Cairo in the middle of October 1938, at the invitation of Huda Sha‘rawi, the pioneer Arab feminist. At that conference, Nassar was elected secretary of the conference bureau. The conference called for an end to the British Mandate and the formation of a constitutional and sovereign state in Palestine, linked by treaty to Britain (as were Egypt and Iraq). She also took part in the General Congress of Arab Women called for by the Egyptian Feminist Union and held at the Cairo Opera House in 1944. She delivered a speech at that conference urging the Arabs to work actively to save Palestine before it was too late.

Sadhij Nassar was the first Palestinian woman to be arrested by the British Mandate authorities because of her nationalist activities. The British arrested her in late 1938 and charged her with supplying arms to the Palestinian rebels, describing her as a “very dangerous woman” and a “prominent agitator.” She was held at the Bethlehem detention camp for eleven months. A wide local and international campaign was mounted to demand her release; her husband wrote her a letter in which he stated that if he did not make it into the pages of history because of his newspaper al-Karmel, he would surely make it because of her.

Nassar continued her editorial and administrative work in al-Karmel. The British Mandate authorities closed the newspaper several times, but in 1944 they invoked the emergency regulations then prevalent in Palestine and sealed its premises permanently.

Following the Nakba of 1948, Sadhij Nassar sought refuge in Lebanon, where she published a series of articles in the newspaper al-Yawm about the tragedy of Palestine and the deterioration of conditions in it. After moving to Syria, she published her articles in Syrian newspapers such as al-Qabas.

Sadhij Nassar was a dedicated and firm nationalist and a prominent and unwavering feminist activist. She was among the first Palestinian women who were active in the field of politics and nationalist organization as well as journalism. She was highly cultured and was proficient in four languages.

She died in Damascus and was buried there.