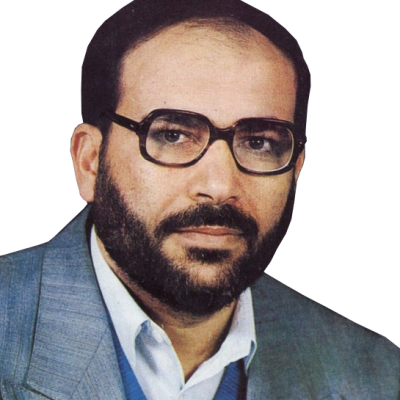 Fathi Shiqaqi was born in the Rafah refugee camp in the Gaza Strip. His family had been driven out of the village of Zarnuqa, southwest of Ramla, in 1948. His father, Ibrahim, was a laborer. He lost his mother, also of the Shiqaqi family, when he was fifteen years old. He was the oldest child in the family.

His wife, Fathiyya al-Khayyat, was from Jerusalem. They had three children: Khawla, Ibrahim, and Usama.

Shiqaqi completed his elementary and secondary education in the UNRWA schools of Rafah. He graduated from the Bir al-Sabi‘ Secondary School for Boys in 1968.

At an early age, he developed an interest in politics and was drawn to Nasserism, but the defeat of the Arab nationalists in 1967 was a landmark event that made him reexamine his beliefs. He gravitated toward the Islamic current represented by the Muslim Brotherhood and joined the group after being introduced to Shaykh Ahmad Yasin.

In 1968, he enrolled in Birzeit College in the West Bank to study mathematics. Following graduation, he moved to Jerusalem where he worked as a teacher.

He sat once again for the Secondary Certificate Examination in order to obtain a grade high enough to enable him to study medicine. In 1974, he enrolled in Zaqaziq University in Egypt to study medicine. Beginning in the mid-seventies, his political ideas began to take shape in the framework of intellectual discussions that took place among Palestinian students in Egypt concerning the centrality of the Palestine question for Islam and Islamic movements.

The victory of the Islamic revolution in Iran in February 1979 was another landmark in Shiqaqi’s life, leading him to write a book entitled Khomeini: The Islamic and Alternative Solution. He severed his links to the Muslim Brotherhood and began to search for a means to establish an armed movement, with an Islamic ideology, to liberate Palestine from Zionist occupation. That same year, he was arrested by the Egyptian authorities because he had authored Khomeini. He was arrested again in July of that same year and imprisoned for four months in the Qal‘a prison for his political and Islamic activity.

In early 1980, Shiqaqi began with several Palestinian colleagues at Zaqaziq University to establish the broad framework and the original group that would eventually give rise to the Islamic Jihad movement. As a result of continuous pursuit by Egyptian security forces he left Egypt in secret and returned to Palestine in early November 1981. His colleagues had preceded him and had begun to build up the movement in the Gaza Strip.

In the early 1980s, Shiqaqi worked for two years at the Augusta Victoria Hospital in Jerusalem and came to lead the Islamic Jihad movement, which then commenced its political and media activities. The movement began to prepare for armed struggle, launched by its secret cells in 1984.

The Israeli occupation authorities arrested Shiqaqi in 1983 and held him for 11 months. After his release, he settled in Gaza where he worked as a pediatrician. He was arrested once again in 1986 and was given an actual prison sentence of 4 years, and a suspended sentence of  5 years, charged with having ties to military activities and with incitement against Israel’s occupation and smuggling arms into the Gaza Strip.

On 1 August 1988, before the end of his time in prison, the Israeli military deported him, accusing him of playing a central role in organizing the intifada. He sought refuge first in Beirut and then in Damascus, which became the headquarters of his movement.

A team of Israeli Mossad agents assassinated him on the island of Malta on 26 October 1995, when he was returning from a visit to Libya. His body was carried to Damascus where a funeral at the Yarmuk refugee camp was attended by tens of thousands of Palestinians. He was buried in the Martyrs’ cemetery of that camp.

Fathi Shiqaqi was a Palestinian leader who was martyred at the age of 44. He had opposed the Islamists who argued that the liberation of Palestine should take place only after the creation of the Islamic state. He rejected the idea that one must await the rise of that state before commencing liberation and so played a central role in turning political Islamism in Palestine onto the path of jihad. He was a man of clear thinking, honesty, and courage and was open to all ideological currents, averse to sectarianism, and committed to national unity in facing the occupation. He loved poetry, especially that of Mahmoud Darwish, and composed some poems. He was also an avid reader of world literature and of philosophical works.

[Khomeini: The Islamic and Alternative Solution]

[Prologue regarding the Centrality of Palestine and the Contemporary Islamic Project]

[The Intifada and the Contemporary Islamic Project]

[The Journey of Blood that Defeated the Sword. The Collected Works]

The Islamic Jihad Movement in Palestine