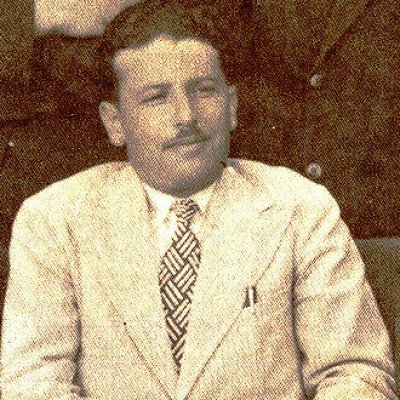 Ishaq al-Husseini was born in the Sa‘diyya quarter of Jerusalem, into an ancient family with a notable national and religious presence and into a family of deep faith, learning, and refinement.

His father was Musa al-Husseini, and his mother came from the Dawudi family. He had two brothers, Muhammad and Ibrahim. He and his wife, Ulwiyya al-Husseini, had three children: Nawar, Hatim, and Bishr.

His father was a member of the Rifa‘i Sufi order and sent him to a kuttab (traditional elementary school) to learn the Qur’an. However, his father died when the boy was seven years old, so his mother transferred him to a regular educational system.

The boy changed schools several times, all in Jerusalem. He first attended the Rashidiyya School when he was ten years old, and then enrolled in the Sultan Salim School where he learnt Arabic and Turkish. He transferred to the Salahiyya College in 1915 where he studied Islamic education, the Arabic language, and the principles of the Persian language, and he remained at that school until it was closed by the British occupation authorities in 1917. He then enrolled in the Collège des Frères, where he remained for two years, and then transferred to the English College, known as Youth College. There he studied Arabic with Nakhla Zurayq (who encouraged him to specialize in Arabic studies) and completed his high school education.

In the autumn of 1923, he and enrolled in the American University in Cairo where he spent two years and obtained a diploma in journalism. He then returned to Jerusalem where he worked as a teacher at the Rashidiyya School. He returned to Cairo in 1926 and studied in the Faculty of Arts at the Egyptian University (which later changed its name to Cairo University); the university was newly established and had just admitted its first group of students. He studied with notable scholars like Taha Hussein, Mustafa Abd al-Raziq, and Ahmad Amin, and he obtained a Bachelor of Arts degree in 1929. From Jerusalem he obtained a scholarship to pursue further study in Britain, so he travelled that year to London where he enrolled in the School of Oriental and African Studies of the University of London. The school sent him to Germany in 1933 to study Semitics at the University of Göttingen, where he spent two academic terms. In 1934, he graduated from the University of London with a diploma in Semitic Languages and a doctorate degree granted for a thesis on the Abbasid scholar Ibn Qutaiba, supervised by the British orientalist Hamilton A.R. Gibb. He was the first Palestinian student to obtain a Ph.D. in a literary subject from that university.

Husseini returned to Jerusalem to teach for a short period at the Rashidiyya School before teaching at the Arab College between 1934 and 1946. Thereafter, he worked as Chief Inspector of Arabic Language in the government schools of Palestine until 1948. During this period he took part in establishing the Arab Cultural Committee in Palestine in 1945 and acted as its secretary-general. In 1946, the committee held the first exhibition of the Palestinian Arabic Book at the Arab Orthodox Union Club in Jerusalem. The exhibition displayed some 800 titles in Arabic and several books in foreign languages, all written by Palestinian authors, and most from his private library. Husseini wrote a Foreword to the index of the books exhibited in which he expressed the hope that a central library of Arabic books be established in Jerusalem, which would serve as a repository for the scientific and literary Arabic heritage of Palestine.

That hope disappeared and with it the hopes of hundreds of thousands of Palestinians when the Nakba of 1948 struck and the Zionist forces occupied the western sector of the city in which he lived. Husseini was forced to leave Jerusalem and to seek refuge, first in Aleppo and then in Beirut in 1949; he taught at the American University of Beirut until 1957. (In 1952 the university granted him leave to teach as a visiting professor at the Institute of Islamic Studies of McGill University in Canada, where he taught for a year.)

In 1957 he left Beirut for Cairo, where he taught at the American University in Cairo. He also lectured at the Higher Arab Studies Institute affiliated with the Arab League (later known as the Institute for Arab Studies and Research), where he headed the division of Palestinian Research. He was also instrumental in setting up the Jerusalem Committee for Research and Studies, which he also directed.  After he retired from the American University in Cairo in 1963, he returned to McGill and taught there until 1969. He also lectured at several U.S. universities. He then returned to Cairo where he remained until 1973.

Following his long absence from Jerusalem, now completely occupied by Israel in 1967, Husseini decided to return to his hometown, a city he loved, whose cause he espoused and whose heritage and Arab character he constantly evoked in his writings and lectures. In Jerusalem, Husseini continued to take part in literary and cultural activities, and many researchers and students attached themselves to him to benefit from his deep learning and wide experience. He set up a Center for Islamic Research in the house of his former teacher Muhammad Isaaf al-Nashashibi in Jerusalem. In 1982, he was elected a member of the Board of Trustees of the Faculty of Science and Technology at Al-Quds University and became president of the Hind al-Husseini College of Arts for Girls. On 16 February 1986, the college held a public ceremony on his eightieth birthday in which tens of Palestinian institutes, scientific centers, and universities participated, in addition to McGill University. At this large cultural event Palestinian scholars, authors, and journalists honored him as dean of Palestinian Arabic literature, embodied in a document signed by some two hundred Palestinian public figures.

Ishaq Musa al-Husseini was a scholar, a critic, a philologist, and a translator. He was the first Palestinian academic to specialize in literary studies, both by research and teaching, thus earning his title as the “teacher of a generation” and the pioneer of literary studies in Palestine. His interests and body of writings were varied and not confined to literary innovation and critical or philological studies but extended to many issues that preoccupied his nation and his generation. These included the need to spread education as widely as possible to achieve national unity and meet the challenges facing the Arab countries. He called for Arab unity out of his belief in Arab nationalism, for renewal and development of the Arabic language in order to make it fit the times, and for particular care to be paid to Jerusalem and Palestinian figures, through research, writing, and making these public figures more widely known. The Palestinian nation and homeland recognized his importance. PLO Chairman Yasir Arafat awarded him the Shield of the Revolution at a ceremony held in Beirut in January 1982, and Egypt awarded him the Medal of Sciences and Arts, First Class, in March 1983.

[An Opinion Concerning the Teaching of Arabic]

[Memoirs of a Hen]

[Are Men of Literature Human?]

[Philip Hitti, Islam in the view of the West (translated from English)]

[The Crisis of Contemporary Arabic Thought]

[Studies on the Past and Present of Muslims]

[Contemporary Literary Criticism in the First Quarter of the 20th Century]

[The Names of Beit al-Maqdis]

[The Arab Character of Beit al-Maqdis]

[The Names of Palestine]

[Orientalism: Its Origins, Evolution and Aims]