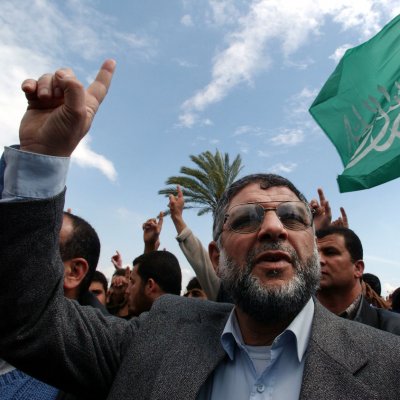 Rantisi Graduates from the Medical Faculty of Alexandria University

Rantisi Obtains a Masters Degree in Pediatrics from Alexandria University

Rantisi Is Arrested for the First Time

Rantisi Is Arrested for the Second Time

Rantisi is Among the 415 Palestinians Deported to South Lebanon

First Assassination Attempt by the Israeli Authorities against Rantisi

Second Assassination Attempt by the Israeli Authorities against Rantisi

Third Attempt of Assassination by the Israeli Authorities against Rantisi

Tens of Thousands of Palestinians Attend the Funeral of Rantisi

Abd al-Aziz Rantisi was born in the village of Yibna, between al-Majdal and Jaffa. He and his wife, Jamila al-Shanti, had two sons, Muhammad and Ahmad, and four daughters: Inas, Samar, Asia, and Asma’.

After the Nakba of 1948 and the occupation of his village by Zionist forces, his family sought refuge in the Gaza Strip and settled in the Khan Yunis camp for Palestinian refugees. Rantisi was six months old at the time. He grew up in the camp, along with nine brothers and two sisters.

Rantisi studied at the UNRWA schools but was forced to work while studying to help support his large family, whose circumstances at the time were dire. He completed his secondary school education in 1965.

An outstanding student, he obtained an UNRWA scholarship to study in Egypt. He enrolled in the medical faculty of Alexandria University where he graduated as a doctor of medicine in 1971.

Following graduation, Rantisi worked first as a doctor in Nasir Hospital in Khan Yunis and then returned in 1974 to Alexandria University to specialize in pediatrics, earning a masters degree in pediatrics in 1976.

Returning to Gaza in 1976, he resumed his work in Nasir Hospital where he became head of pediatrics. He would frequently roam the city on foot to treat the sick children of the poor for free.

While studying in Egypt, he was influenced by the views of the Society of the Muslim Brothers. Returning to Gaza, he joined the society, becoming one of its most prominent leaders in the Khan Yunis region. He was also a member of the board of The Islamic Center (al-Mujamma' al-Islami) and of the Medical Society, and he lectured at the Science College of the Islamic University of Gaza when it first opened in 1978.

The Israeli authorities dismissed him from his job at Nasir Hospital in 1983. He was arrested for the first time that year for having organized a campaign to withhold paying taxes to the occupation authorities.

In 1986, he returned to his teaching position at the Islamic University of Gaza and was put in charge of the university’s clinic.

Rantisi was one of the seven leaders of the Muslim Brothers who met in the house of Shaykh Ahmad Yasin on 9 December 1987 and decided the creation of the Movement of Islamic Resistance (HAMAS), which soon became a major force in the Palestinian intifada.

Rantisi was among 415 Palestinian activists from Hamas and Islamic Jihad expelled in December 1992 by the Israeli occupation authorities to the Lebanese village of Marj al-Zuhur in South Lebanon, and he was chosen to act as their spokesman. On 15 December 1993, he returned with his comrades (under a U.S.-Israeli-Palestinian compromise concluded in April 1993) to his homeland, but was immediately put under administrative detention. Rantisi had expressed his opposition to the Oslo Accord and called for resisting Israeli occupation by all available means. In August 1995, an Israeli military tribunal sentenced him to a prison term; he was released in April 1997.

On 10 June 2003, Israeli forces attempted to assassinate Rantisi; one of his bodyguards was killed and his son Ahmad was severely wounded. In September of the same year, he was again targeted unsuccessfully. The third attempt on his life occurred three days after Shaykh Ahmad Yasin was assassinated; Rantisi miraculously survived the attempt. Hamas did not reveal that he had been targeted until after it was confirmed by Israeli security agencies.

Rantisi was one of six Hamas leaders referred to by name by President George W. Bush as “international terrorists”; their US assets were frozen and any dealings with them were forbidden.

Following the assassination of Shaykh Ahmad Yasin on 22 March 2004, Hamas elected Rantisi as his successor. Barely a month later (on 17 April 2004), an Israeli helicopter fired three missiles at his car in the Gaza Strip; he was killed, along with two of his bodyguards.

On 18 April 2004, tens of thousands of Palestinians attended his funeral, which started from the Shifa Hospital in Gaza. Prayers were recited over him in the al-Omari Mosque and he was buried in the cemetery of Shaykh Ridwan.

Rantisi was a political leader of strong will, a dominant yet attractive personality, and a man of many talents. In addition to his scientific and medical achievements as a pediatrician, he was a writer, poet, and orator, who published his political writings and poems in many Arab newspapers and on his active website on the internet, which was constantly subjected to electronic warfare by the Israeli occupation forces.