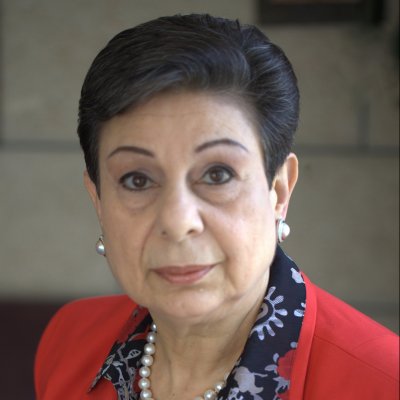 Hanan Ashrawi is the daughter of Dr. Dawud Mikha’il and Wadi‘a As‘ad; she was born in Nablus where her father was working as a doctor, but her family comes from Ramallah. She has four sisters: Huda, Muna, Abla, and Nadia. She and her husband, Emile Ashrawi, have two daughters, Zeina and Amal.

Hanan Ashrawi was educated at the Friends Girls School in Ramallah. In 1964 she enrolled at the American University of Beirut (AUB) to study English Literature; she joined the branch of the General Union of Palestinian Students, becoming its spokesperson, and she also joined the General Union of Palestinian Women. She took part in the activities of several societies, such as the Fifth of June Society, in addition to working in the social and media fields in the Palestinian refugee camps in Beirut.

After obtaining her BA and MA in English literature at AUB, she travelled to the United States in 1969 to continue her graduate studies at the University of Virginia; however, she returned to Palestine in 1973 before completing her thesis in comparative and medieval literature.

Ashrawi founded the Department of English at Birzeit University and chaired it until 1978, and then again from 1981 to 1984. In the interval she returned to Virginia to complete and defend her doctoral thesis during the academic year 1981–82. In 1986, Ashrawi was appointed dean of the Faculty of Arts at Birzeit University, and she remained in that post until 1995.

Ashrawi was a founding member of the Committee for Legal Aid and Human Rights at Birzeit University (established in 1974) and remained a member until 1995. She helped to establish the Birzeit University Professors and Employees Union. As a university faculty member, she was frequently the target of harassment by the occupation authorities because she joined the demonstrations and strikes organized to protest the violent incursions into the campus by Israeli soldiers or their closures of the university. She was detained on many occasions for one day and on specific dates around which mass protests were organized, such as 5 June, the date when the West Bank, East Jerusalem, and the Gaza Strip were occupied in 1967, and 2 November, the day when the Balfour Declaration was issued in 1917.

In January 1996, Ashrawi was elected a member of the Palestinian Legislative Council (PLC), representing Jerusalem, and headed the Political Committee of the council in 1996–97. She then headed the Legislative Reform Committee between 2000 and 2005. Between 1996 and 1998 she served as Minister of Higher Education and Scientific Research but resigned her post because of the Palestinian Authority’s (PA) failure to implement governmental reform plans and differences with the Palestinian leadership over the conduct of peace negotiations. In 2006 she was again elected to the PLC representing the list called Third Way, headed by Salam Fayyad. In 2009 she was elected a member of the PLO’s Executive Committee, heading the Culture and Information Department, a position she retained until her resignation in November 2020.

Ashrawi has founded and headed a number of organizations and institutions and still heads a number of them. The most significant is the Independent Commission for Citizens’ Rights (renamed in 2007 as the Independent Commission for Human Rights), founded to protect the rights of the individual in Palestinian legislation and PA practices; the Palestinian Initiative for the Promotion of Global Dialogue and Democracy (MIFTAH), aimed at activating the principles of democracy and sound governance in Palestinian society and at influencing decision makers and world public opinion on the Palestine question through effective and deep dialogue and the free exchange of information and ideas; and the Coalition for Accountability and Integrity (AMAN), a civil society movement that seeks to combat corruption and to enhance integrity, transparency, and accountability in Palestinian society. She is also a member of the board of trustees of several Arab and international institutions such as Birzeit University, the Institute for Palestine Studies, the International Forum for Human Rights, the World Bank Middle East and North Africa Region, the United Nations Research Institute for Social Development, and the Council on Foreign Relations in Washington, DC.

Hanan Ashrawi has been awarded several honorary doctorates from a number of Arab and foreign universities such as Saint Mary’s University, Halifax, in Canada in 2000; the American University in Cairo in 2003; and the American University of Beirut in 2008. She has also won a number of prizes and medals, such as the Exceptional Arab Woman Prize for Political Activism from the Center for Arab Women’s Studies in Dubai in 2005, the Olof Palme Prize in 2002, the Sydney Peace Prize in 2003, the UNESCO’s Mahatma Gandhi Medal in 2005, and the French Commandeur de l’Ordre national du mérite in 2016.

Hanan Ashrawi is a pioneering Palestinian national, political, and feminist figure and among the most outstanding women of Palestine and the Arab world at the political, diplomatic, media, academic, social, and cultural levels. She has substantially contributed to the development of Palestinian civil society through founding several civic institutions and transmitting the voice of Palestine to the world. In addition, she has written works on Palestinian literature and literary criticism, as well as several poems, short stories, and articles on Palestinian culture and politics.

[The Short Story in the Occupied Land]

This Side of Peace: A Personal Account. New York: Simon and Schuster, 1995.

Victor, Barbara. A Voice of Reason: Hanan Ashrawi and Peace in the Middle East. New York: Harcourt, Brace and Company, 1994.

Exhilaration of Revolt, Promise of Freedom