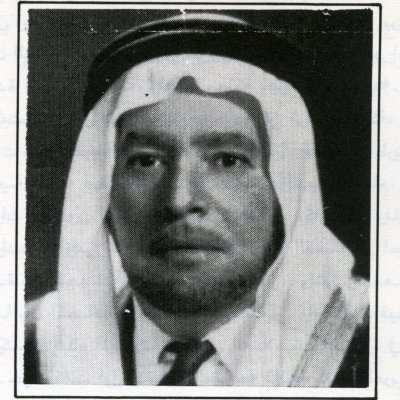 Tawfiq Ibrahim was born in the village of Indur, ten kilometers southeast of Nazareth. He joined the nationalist struggle against British imperialism and the Zionist project while still fairly young.

Ibrahim joined the movement led by Shaykh Izzeddin al-Qassam and became one of its most prominent leaders when the Shaykh was martyred at the battle of the forests of Ya‘bud in November 1935. He was called Abu Ibrahim the Younger, to distinguish him from another Qassam leader, Khalil Muhammad Isa from the village of al-Mazra‘a al-Sharqiyya, who was called Abu Ibrahim the Elder.

Following the outbreak of the Great Palestinian Rebellion of 1936, Ibrahim took command of several sectors in the Galilee district and was active on the roads between Safad in the east, Tiberias in the southeast, Nazareth in the center, and Acre in the west. His preferred modus operandi in guerrilla warfare was to set traps for British army convoys and armed guards of Jewish colonies, and he succeeded very well in many of these engagements. He was also able to break into the headquarters of the British Commissioner in Tiberias and seize some of his files.

In 1938–39 he defied the attempts by Jewish forces, backed by British troops, to penetrate into Arab western Galilee through building military colonies known as “Stockade and Watchtower.” During these years, he was in constant touch with the leadership of the Palestinian revolt in Damascus, to whom he sent regular reports signed by “He who trusts in God, Abd al-Ghaffar.” His military operations greatly disturbed the British authorities, who announced a prize for his arrest. When the revolt ended in 1939, Abu Ibrahim sought refuge in Syria but returned to Palestine at the end of World War II.

In 1948, and following the outbreak of hostilities between Arabs and Jews in the wake of the UN Partition Resolution, the Arab Higher Committee assigned to him command of a force of 200 armed militants. This force helped to defend Nazareth and to repel Zionist forces from nearby villages.

Abu Ibrahim’s force, supported by volunteers from nearby villages, took up positions in the villages of Kafr Kanna and Ayn Mahil. He then began to employ the same guerrilla tactics against the Jewish Palmach and Haganah forces that he had once employed against the British army. The strategic aim was to cut off the Jewish colonies of the eastern Galilee stretching between Tiberias and the Lebanese frontier, from the colonies of Jezreel Valley (Marj ibn Amir). Abu Ibrahim succeeded in disrupting communication and movement on the main roads and forcing the enemy to use roundabout routes, which caused considerable disruption to the daily life and economy of the colonies. Abu Ibrahim retained the initiative until the end of March 1948. On 11 March, he repelled an attack launched by a combined force of the Palmach and the Golani brigade on his headquarters in Kafr Kanna. Not content with repelling that force, he carried out a counterattack described by the official Israeli history of the 1948 war as being “the first time when the enemy [Arabs] pursued an attacking force to that extent.”

Despite the local successes of Abu Ibrahim and the success of his fellow freedom fighters in guerrilla warfare elsewhere in Palestine, during the period of the civil war which preceded the entry of regular armies in the middle of May 1948, things began to change for the worse for the Palestinians, beginning the first week of April when the Zionist forces began to implement their military plan to impose partition by force and practice ethnic cleansing.

After the Nakba of 1948, Tawfiq Ibrahim sought refuge in Damascus where he later died and was buried.

Tawfiq Ibrahim (Abu Ibrahim the Younger) was a prominent freedom fighter of the al-Qassam school, strong willed, pure in soul, unbending in determination, a model of chivalry and patriotism in the Palestinian countryside in his challenge to Britain’s colonialist policies and the Zionist assault aimed at ethnically cleansing the indigenous residents. In his memoirs, Akram Zuaiter describes him as “One of the most loyal and most courageous leaders of the Revolt that I have met.”