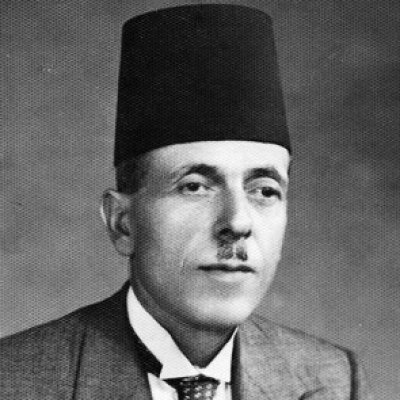 Muhammad Ali al-Taher was born in Nablus to Aref al-Taher and Badi’a Kurdiye. He and his wife, Zakia al-Bizri, had one son, Hassan, and two daughters, Jihad and Muna.

Aref al-Taher enrolled his son in an elementary religious school (kuttab) in Jaffa, and it is believed that this was the only formal education the child had. He grew up in Jaffa, where he worked as a correspondent for the Beirut-based newspaper Fata al-ʿArab [The Young Arab], where he published an article in 1914 titled “Zionists in Palestine,” warning of the danger of Zionism.

On the eve of the outbreak of World War I, Taher fled to Cairo, but because of his nationalist activities, the Egyptian authorities imprisoned him for two years (1915-17), first in Alexandria and then in Giza near Cairo. When the war ended, Taher returned to Palestine and became an editor for the newspaper Suriya al-janubiyya [Southern Syria], which was based in Jerusalem. He also worked as a correspondent for other newspapers in Beirut and Damascus.

He was appointed to the Post and Telegraph Office in Nablus but resigned when he learned that the Mandate authorities planned to implement the Zionists’ designs. He left Palestine for Cairo. There, in the neighborhood of Sayyidna Hussein near al-Azhar Mosque, he opened a modest shop where he imported and sold olive oil from Nablus, which the city was renowned for. With the passage of time, this shop became a meeting place for Egyptian nationalists and their counterparts from various parts of the Arab world and Islamic world who had sought refuge in Egypt.

In 1921, Taher established the Arab Palestinian Information Bureau in Cairo and founded the Palestinian Committee, which comprised Palestinians, Egyptians, and other Arabs and included writers, poets, journalists, and lawyers. The committee set itself the task of making the Egyptian, Arab, and Muslim public aware of the struggle of the nationalist movement in Palestine and to express solidarity with it by issuing statements and appeals. During that period, Taher wrote several articles on Palestine and published them in Egyptian newspapers, including in al-Liwaaʾ al-Masri [The Egyptian Standard], in which he warned about the dangers of Zionism and of Britain’s aim to establish a Jewish state. He established close relationships with a number of prominent Egyptian nationalists, including Muhammad Hussein Haykal, who was the editor-in-chief of the newspaper al-Siyasa [Politics].

In 1924, Taher founded the weekly newspaper al-Shura [The Consult], whose first issue was published on 22 October of that year. Initially its motto was “a newspaper discussing the affairs of Syria (Palestine, Syria, Lebanon and Transjordan)." He later changed it to “a newspaper discussing the affairs of oppressed peoples and subjugated nations” and then changed it again to “a newspaper discussing the affairs of Arab countries and oppressed lands.” His newspaper backed Arab causes and supported the calls for liberation wherever they were. Because of this policy, it was banned from distribution in most of the Arab countries under colonial authority, especially Palestine, Syria, and Lebanon, where its issues were confiscated. This drove him to print it under the mastheads of other newspapers, such as al-Nas, al-Minhaj, al-Jadid, al-Shabab, and al-ʿAlam. These newspapers’ owners allowed him to publish using their publishing licenses without charge so that he could continue printing whatever he wanted.

Taher made the office of al-Shura a forum where Egyptian nationalists could meet with nationalists visiting from the Arab East and the Maghreb (North Africa), who were discussing ways to strengthen solidarity with the Palestinian cause and other Arab issues, including the issues of the Maghreb and its liberation movements. Figures like the Iraqi poet Jamil Sidqi al-Zahawi, the Yemeni leader Ahmed Muhammad Nu‘man, the Syrian leader Shukri al-Quwatli, the Tunisian leader Abdul Aziz al-Thaalabi, and the Moroccan leader Allal al-Fassi would all meet there, as well as Muslim mujahideen, or fighters, from India, such as Maulana Shaukat Ali, and those from Indonesia, Afghanistan, and Malaya.

Taher visited Palestine in 1925 and witnessed with his own eyes the growth of the Zionist colonies. This caused him to campaign even more fervently against the Zionists and British. After returning to Egypt, he remained closely connected with Palestine and its events. He was even made the authorized representative of the Palestinian nationalist movement in Egypt in 1931, and he was in charge of announcing its activities and publishing its communiques in Cairo. In the same year, he participated in organizing the Pan-Islamic Congress that was held in Jerusalem. He narrated the role he played in the conference and its proceedings in his book Nazarat al-shura [Perspectives on Consultation], which he published in Cairo in 1932.

Taher visited Palestine just before the outbreak of the revolt of 1936-39 but was unable to stay for long because the Mandate authorities served him notice to leave; he returned to Cairo. He made it his task to raise awareness about the revolt and its objectives. He compiled news of the revolt and the crimes of the Mandate authorities in a book he titled Filastin ard al-shuhadaʾ [Palestine, land of the martyrs], which he intended to distribute for free. However, the police confiscated the printing plates and the already printed folios, so the book was not published. Also, the British authorities had rejected his application to obtain a Palestinian passport, on the grounds that he was "not Palestinian."

After World War II broke out in 1939 and a state of emergency was declared in Egypt, Taher dissolved the Palestinian Committee and the Arab Palestinian Information Bureau and ceased all political activity. However, the British authorities continued to pursue him. He was arrested on 21 September 1941 and held in the prison for foreigners in Cairo. But he fell ill in prison, so he was transferred to El Demerdash Hospital, where he was kept under police guard. He managed to escape from the hospital and remained in hiding for eleven months, during which he moved all over Egypt in disguise, taking on false names. He wrote an account of what he suffered while in prison and as a fugitive in his book Zalam al-sijn [The Darkness of Prison]. On 5 February 1942, the new prime minister, Mustafa al-Nahhas Pasha, who was on good terms with Taher, issued an order to stop his prosecution.

Taher criticized the United Nations for approving the partition plan for Palestine on 29 November 1947, and he held Britain responsible for the atrocities being committed there. He recorded this in his book titled Collected Papers: A Blood-red Book about the Atrocities of the English, the Treachery of the Jews, and the Fortitude of the Arabs. The Palestinian Nakba left him bitter and sad. When his friend Ahmad Hilmi Pasha Abd al-Baqi invited him to participate in the All-Palestine Government in Gaza (which he headed), Taher declined so as not to lose his freedom of movement and freedom of expression to write whatever he wanted. On 21 July 1949, the Egyptian authorities issued a military order to arrest him because he had exposed what lay behind the loss of Palestine and had placed the blame equally on Palestinian and Arab officials alike. He was moved to the Huckstep Detention Camp but was released in less than a month on the order of the new Egyptian prime minister. He narrated the facts of what happened to him during his detention in minute detail in his book The Huckstep Detention Camp, published in Cairo in 1950.

After the Free Officers’ overthrow of the monarchy in July 1952, Taher tried to re-establish his newspaper al-Shura; its publishing license was restored during the short period when General Muhammad Naguib was chief of the Revolutionary Command Council and then the first President of the Republic of Egypt. However, this attempt failed and the Interior Ministry compelled him to sign a pledge to never attempt to publish the newspaper.

In 1955, Taher left Cairo permanently and went to Damascus, where he was warmly welcomed by Syria’s nationalists, both within the government and outside it. But soon he began to feel increasingly stifled by Syrian Military Intelligence (the Deuxième Bureau) under the leadership of Lieutenant Colonel Abdul Hamid al-Sarraj, and he was forced to flee to Lebanon in the summer of 1957. He finally settled in Beirut, in the neighborhood of Ras Beirut, where he hosted a literary salon every Sunday morning in his apartment on Jeanne d'Arc Street facing the campus of the American University of Beirut. He also hosted another salon in his apartment every Monday evening called “al-Nadwa,” (the symposium).

Taher died on 22 August 1974 and was buried in the Martyrs’ Cemetery in Beirut following a funeral with Palestinian military honors. Representatives of the Lebanese president Suleiman Franjiyeh and PLO Chairman Yasir Arafat were among the mourners who offered their condolences, as were envoys of leaders from North Africa. In the course of his life, he was awarded several honors, including by King Muhammad V of Morocco and Tunisian president Habib Bourguiba.

Muhammad Ali al-Taher was a Palestinian patriot and an Arab nationalist who believed in Arab unity. He was distinguished by his tireless activism that never abated and for his dedication to the cause of his own nation and to causes of Arab liberation. He was known for having a quick temper and tremendous self-confidence; people knew him by the nickname mujahid [fighter].

[Collected Papers: A Blood-red Book about the Atrocities of the English, the Treachery of the Jews, and the Fortitude of the Arabs]

[The Darkness of Prison]