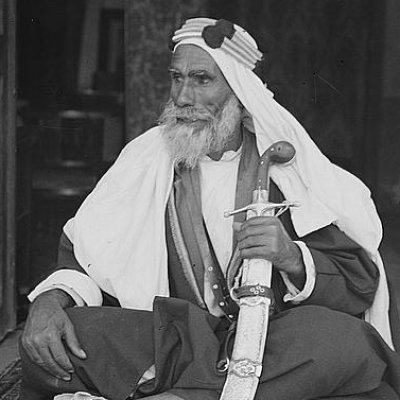 Freih Abu Middein was born in Bir al-Sabiʿ (Beersheba) in 1871 into a branch of the Hanajira clan, whose lands extended from north of Bir al-Sabi’ up to the coasts of Gaza and whose forefathers are said to have migrated to Palestine via Transjordan at the beginning the Islamic conquests. He married a woman named Maqbula, and among their children were two sons, Abdul Dayem and Mustafa. One of his grandsons, Advocate Freih Abu Middein was minister of justice in the 3 cabinets formed by Yasir Arafat between 1994 and 2002, and became in charge of the Palestinian Land Authority between 2002 and 2007.

Abu Middein was orphaned at a young age after his father, Farhan Abu Middein, was killed in a battle between the Tayyaha and Tarrabin clans in 1876; he was buried in al-Dhahiriyya (present-day Hebron region of the West Bank).

In 1910, the Ottoman authorities appointed Abu Middein to serve on the council of Bir al-Sabiʿ subdistrict, a position he held until the outbreak of World War I. During the war, he was appointed as the commissioner in charge of requisitioning grain for the Ottoman army stationed in southern Palestine. During the fighting, he was apprehended by British forces and taken to a detention camp in Deir al-Balah (in the present-day Gaza Strip). During his detention, the head of British intelligence recognized him and presented him to the British officers, who treated him well. They let him take charge of harvesting the crops of the migrants from his clan, and he was assisted by people from Khan Yunis, Bani Suhaila, and Deir al-Balah. He remained in Deir al-Balah until the end of the war in 1918 and then returned to the territory inhabited by his clan and became its chieftain.

In January 1919, Shaykh Abu Middein attended the first Palestinian National Congress that was held in Jerusalem as delegate from the city of Bir al-Sabiʿ. He voted in favor of the resolutions that rejected the separation of Palestine, or southern Syria, from Greater Syria, demanded that Syria's independence be guaranteed without foreign guardianship or tutelage, and rejected the Balfour Declaration and Jewish immigration to Palestine.

Shaykh Abu Middein was chosen as a representative for Bir al-Sabiʿ in the first advisory council that was created by Herbert Samuel, the first British High Commissioner to Palestine in October 1920. Then, in 1922, the British appointed him as mayor of Bir al-Sabiʿ.

In recognition of his services, the British government awarded him with the Order of Honorary Member of the British Empire.

In May 1922, the British authorities formed a second advisory council and renewed Abu Middein’s appointment. The Executive Committee of the Palestinian National Congress was opposed to the creation of this council and urged its members to resign. However, Abu Middein did not resign; he asserted that by participating, he could prevent the Mandate authorities from taking any measures that were adverse to Arab interests. The British terminated the council in February 1923.

On 15 March 1923, Abu Middein became a member of the tribal courts of Bir al-Sabiʿ, which were vested by the Mandate authorities with the authority to officially adjudicate in cases of blood feuds and land ownership disputes.

In 1931, Abu Middein, together with the other tribal chieftains (mashayikh) of Bir al-Sabiʿ, presented a petition to the British High Commissioner requesting clemency for the Palestinian prisoners who had been arrested by the British authorities during the al-Buraq / Western Wall disturbances (habbat al-Buraq) in the summer of 1929. The chieftains say in their petition that they learned “with the greatest pleasure” that the king of Great Britain had granted the High Commissioner the right to pardon the prisoners; consequently, they “beg your Highness to use the power within your rights and to release them as a gesture of benevolence to them so as to bring joy to their families and children. In conclusion, please accept our utmost regards.”

Abu Middein was elected to the sheikhdom of the Hanajira clan on 26 March 1932 under the auspices of the Mandate authorities and in the presence of Aref al-Aref, the district officer of Bir al-Sabiʿ subdistrict.

When the purchases of Arab lands by Jews who had migrated to Bir al-Sabiʿ intensified, Shaykh Abu Middein was one of the most prominent participants in the conference held by the mashayikh of Bir al-Sabiʿ in 1934, in the sites where the Tayyaha traditionally camped. The main topic of discussion was the best strategy for preventing further sale of lands in Bir al-Sabiʿ to Jews and how to combat the middlemen enabling the land sale.

Abu Middein himself owned large tracts of land and several buildings in Bir al-Sabiʿ and Gaza. He was known for his extreme generosity; he donated a two-storey building to be the headquarters of the Arab Youth Club in Bir al-Sabiʿ city.

When the Palestinian Nakba occurred in 1948, Abu Middein refused to remain in the desert, given that he and his clan were unarmed and thus incapable of resisting the Zionists, so they fled to Gaza, where he owned property and land, and took up residence in al-Bureij camp.

Shaykh Abu Middein was one of the most prominent Bedouin Arab mashayikh in the Bir al-Sabiʿ region during the late Ottoman and British Mandate eras. He knew the Sinai Peninsula, the Negev desert, and Wadi Araba all the way up to Aqaba like the back of his hand. He held a number of administrative positions, the most important of which was mayor of Bir al-Sabiʿ. He remained illiterate and lived as a simple Bedouin his entire life. In appearance, he was described as being “extremely tall with a beard somewhat longer than usual, and for having a glint in his eye more dazzling than that of the long-hilted sword” that he used to “trail alongside him” whenever he entered the Government House in Jerusalem or went to the Islamic Council for social occasions or national meetings or conferences. He worked with the Palestinian Arab national liberation movement while at the same time striving to maintain good relations with the British, so much so that in 1946, when he underwent surgery in Gaza Hospital, the British High Commissioner himself reportedly visited him in hospital to wish him well, a gesture no British official made toward any other Arab in Palestine, no matter how prominent his standing.

He died in the Gaza Strip in 1955 and was buried there.