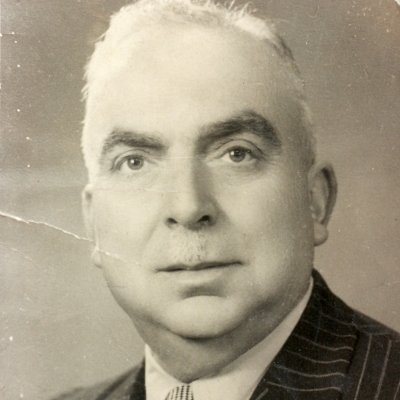 Aref al-Aref was born in Jerusalem. His father was Shehadeh al-Aref.

Aref and his wife, Sa‘ima al-Burnu, had two sons, Samir and Farouk, and three daughters: Lamis, Salwa, and Farida.

He attended the Ma'mouniya School in Jerusalem and in 1909 continued his secondary education in the well-known Nümune-i Terakki school in Istanbul. Then he enrolled in the arts faculty at Istanbul University and graduated in 1913. While studying at the university he worked in the Turkish press to cover the costs of his education. He also joined the nationalist Literary Club (al-Muntada al-Adabi) where residents and visiting Arabs met and where people gave lectures on Arab history and Arab rights.

After graduation Aref was appointed to a position in the translation department of the Ottoman foreign ministry. When World War I broke out in 1914, he enrolled in the military academy and graduated as an officer six months later. He was sent to the eastern front and fought the Russians in the Caucasus.

While fighting with his battalion, Aref was captured by the Russians, who sent him to a prison camp in Siberia. In the three years he spent there he learned Russian and German, the latter so well that he was able to translate Ernst Haeckel's Die Welträthsel  (The Riddle of the Universe) into Arabic. While in detention, and together with his Syrian colleague Ahmed al-Kilani, he produced a satirical weekly newspaper in Arabic called Naqat Allah (God's Camel). About fifty issues came out in the years 1916 and 1917.

On 18 September 1918, Aref and some of his Arab fellow prisoners managed to escape the prison camp and head to the Far East on their way to their own countries. After an arduous journey through many countries, Aref reached his birthplace at the end of February 1919, after an absence of about ten years. On his way back to Palestine, Aref had written an amusing book called My Vision, which took the form of a dream. It contained a synopsis of his opinions and reflections on the state of the Arab countries in revolt and his ideas about how they might become in the future. He foresaw a secular nationalist revival that took advantage of science, education, and progress.

After settling in Jerusalem, Aref joined the Arab Club. He and Mohammed Hassan al-Budairi were appointed the editors of its newspaper, Southern Syria, which served as its mouthpiece. The first issue came out on 8 September 1919, and it was the first nationalist newspaper published in Jerusalem after the start of the British occupation. It was a weekly at first and later came out twice a week. Because it attacked Britain's pro-Zionist policies and demanded the abrogation of the Balfour Declaration, the British authorities banned publication several times.

On 4 April 1920, Aref al-Aref spoke alongside Haj Amin al-Husseini and Omar al-Saleh al-Barghouthi at a public rally attended by thousands of people on the first day of the Nabi Musa festival in Jerusalem. The rally soon led to violent clashes between Arabs and Jews, with a large number of dead and injured on both sides. The British authorities accused the speakers at the rally of inciting violence and tried to detain them. But Husseini and Aref escaped their clutches, took refuge on the east bank of the River Jordan, and then moved to Damascus. They were sentenced in absentia to ten years' imprisonment.

In Damascus Aref was assigned to represent the city of Jerusalem in the General Syrian Congress. He also joined other Palestinians resident in Damascus in setting up the Palestine Association. He was elected a member of the association's board, which formed a secret society called Fata Filastin (Youth of Palestine) with the aim of carrying out armed operations on the northern border of Palestine.

After the French army occupied Damascus on 24 July 1920 and the Faisal government collapsed, Aref and a group of colleagues took refuge in Transjordan until the British High Commissioner in Palestine, Herbert Samuel (whose administration had taken over from the military authorities in Jerusalem), issued a general amnesty for those accused in the Nabi Musa festival violence. Aref went back to Jerusalem, where the British authorities stipulated that he could not take part in politics or work as a journalist.

From 1921 to 1926 Aref worked as a district officer, in Jenin, Nablus, Baysan, and Jaffa. From 1926 to 1929 he was on secondment in Transjordan, where he held the position of secretary-general in the government of Prince Abdullah ibn al-Hussein.

Aref remained as assistant district Commissioner in charge of Ramallah subdistrict until Jordan and Israel signed the Armistice Agreement on 3 April 1949 and the West Bank was annexed to the Kingdom of Jordan. In the same year King Abdullah of Jordan appointed him head of the Jerusalem municipality, a position he assumed again by election in 1951 after winning a majority of the votes. He held the position until 1955, when he was appointed minister of public works in the government of Hazza‘a al-Majali. But he resigned shortly after because he insisted that Jordan should avoid joining the Baghdad Pact.

After resigning from the government, Aref concentrated on research and writing. Having witnessed the Nakba first-hand and recorded its developments on a daily basis, and having collected an unmatched number of accounts from Arab and Palestinian officials, activists and ordinary citizens he was keen on interviewing in Palestine and Arab capitals, he embarked on writing a 6-volume historiography  of the Palestine War (published between 1956 and 1961) which remains one of the most seminal and credible Arab references on the Nakba. Aref was also involved in social work. He chaired the executive committee of the Wounded Veterans League in Jerusalem and was a trustee of Jam‘iyyat in‘ash al-usra (the Family Revival Society) in al-Bireh which was chaired by Samiha Khalil, an activist for women’s rights.

In 1963 Aref was appointed director of the Palestinian Museum in Jerusalem, which had been set up under the British Mandate with assistance from the Rockefeller Foundation in the United States. In 1967 he performed the pilgrimage to Mecca.

Aref al-Aref died in Ramallah after a stroke and was buried there. In 1990 the PLO awarded him the Jerusalem Medal for Culture, Arts and Literature.

Aref al-Aref was a great Palestinian historian. He was nicknamed the shaykh (dean) of Palestinian historians. His prolific writings on history are distinctive for their accuracy and objectivity. They draw on his own experience, his research and documentation, and a large network of friends, colleagues, and acquaintances from various backgrounds. He benefited from the public offices that he held in the civil service, especially during the British Mandate period, to write about the areas where he had worked, the events that happened there, and the people who lived there and their special characteristics, highlighting the character of Palestine throughout the ages. His massive work on the Nakba in 1948 is one of the most important and authoritative references on the subject in Arabic.

[The History of the Jerusalem Sanctuary]

[The History of Jerusalem]

[The History of Bir al-Sabi' and Its Tribes]

[The History of Gaza]

[The Administration of Justice Among the Bedouin]

[A Detailed History of Jerusalem]

[A Brief History of Asqalan]

[The Nakba: The Nakba of Jerusalem and the Lost Paradise]

[The Nakba in Photographs: The Catastrophe of Palestine's Arabs]

Bedouin Love, Law and Legend, dealing exclusively with the Badu of Beersheba, in collaboration with Harold W. Tilley. Jerusalem: Cosmos, 1944.

The Dome of the Rock and Other Muslim Sanctuaries in the Haram of Jerusalem: History and Guide, in collaboration with A. Willard Jones. Jerusalem: Jerusalem Commercial Press, 1951.