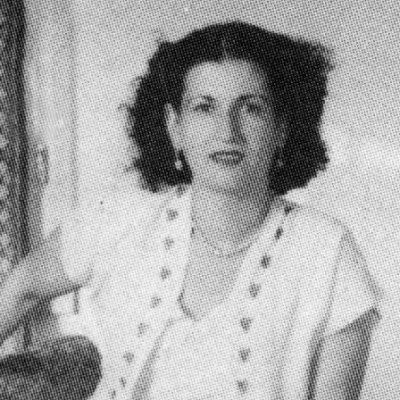 Samiha Khalil was born in the town of Anabta. Her father was Yusuf al-Qabaj and her mother was Halima Tuqan. Her husband was Salama Khalil. She had four sons, Khalil, Saji, Samir, and Samih, and one daughter, Sa’ida.

She was educated at a private elementary school in Nablus for two years and completed her elementary education until the seventh grade in Tulkarm. Her parents then sent her to the Friends boarding school in Ramallah.

During the General Strike and the Great Rebellion her father was mayor of Anabta. He encouraged the wealthy inhabitants to donate foodstuff for distribution to the poor. With her own eyes she witnessed how British soldiers broke into her house and used their bayonets to slit the bales of rice and flour. When her father loudly protested that these bales were meant for the poor, he was violently pushed aside and he fell to the floor. The young girl never forgot that scene and also never forgot that the British killed five of her cousins during the Great Rebellion.

At age seventeen her parents decided that she should get married because she had completed the second secondary class. She married Salama Khalil from the town of al-Taybeh. Her husband worked as a teacher, later becoming a headmaster in schools in Qalqilya, al-Majdal, Gaza, and Ramallah. He supported her desire to complete her education once her children had grown up. She finished the curriculum of the last three years of secondary school in nine months and sat for the general secondary exam (the tawjihi) with her son Saji; she was more than forty years old when she enrolled in Beirut Arab University to study Arabic literature. The Israeli occupation of East Jerusalem and the West Bank in 1967 prevented her from travelling to sit for her final third-year exams, and so she was forced to abandon her university studies.

She had devoted herself to relief work with the refugees ever since the Nakba of 1948, and along with other women she collected money, clothes, and food. In fact she devoted her entire life to humanitarian relief and collecting funds for the destitute. In 1952 she founded the Arab Women’s Union in al-Bireh and served as its president. In 1965 she and other women established Jam‘iyyat in‘ash al-usra (the Family Revival Society) and remained its president until she died. She took part in founding the Bireh section of the General Union of Palestinian Women and attended the General Congress in Jerusalem in 1965 organized by that union. A year later she was elected secretary of the Executive Committee of the General Union and became a member of the Palestine National Council.

The 1967 catastrophe was a radical turning point in her life. She rushed to the aid of refugees, especially the villagers of the Latrun region whose villages Israel destroyed immediately after its occupation of the West Bank.

The occupation authorities arrested her several times for interrogation and imprisoned her twice. In the early 1980s the Israelis placed her under house arrest for two and a half years and prevented her from travelling for twelve years. Despite these restrictions she managed to represent Palestine’s women in more than twenty congresses worldwide, and she delivered speeches and explained her country’s cause in international arenas. Her leadership role was best seen through her presidency of the General Union of Palestinian Women in occupied Palestine and her presidency of the Family Revival Society.

She would ask women to donate whatever jewelry or antiques they could spare. The proceeds from the sale of these together with food items, pastries, and sweets would be donated to children of martyrs. She could thus fulfill her four objectives: saving and educating children, putting mothers to work, enshrining the principles of volunteer work, and protecting heritage.

Samiha Khalil played a leading role in founding a popular Palestinian museum in Ramallah. This included wax figures and a model of the village of Sammu‘ and its battle.

The preservation of Palestinian popular culture was among her top priorities. Through her Family Revival Society, she founded the Committee for Social Research and Heritage in 1972 and became a member of the committee whose first published study in 1973 was entitled Qaryat Turmus ‘Ayya: dirasa fi-l turath al-sha‘bi [The Village of Turmus ‘Ayya: A Study of Popular Culture]. The following year the committee issued a journal called al-Turath wa-l mujtama‘ [Heritage and Society].

She was a firm believer in total equality between men and women. She ran for the presidential elections in 1996 opposite Yasir Arafat. She won 12 percent of the vote, thus enshrining a democratic and enlightened tradition in Palestinian political life.

She was the recipient of several awards and medals, including the Jerusalem Medal for Culture, Arts and Literature in 1991. She thus thoroughly deserved her common sobriquet: The Oak Tree of Palestine.

Samiha Khalil lived an ascetic life since the family had no income apart from her husband’s salary. But she was a careful housewife and performed all domestic duties by herself with help from her children.

Khalil published as many popular tales as she could collect in Majallat al-turath wa-l mujtama‘. She wrote zajal poetry (which spread among her intimates) and recited it on national occasions. She wrote a book of zajal called Min al-intifada ila al-dawla [From the Intifada to the State]. She also published many political and social articles in local newspapers.

She died on 26 February 1999. Her tombstone carries this inscription: “Samiha Khalil: She fought for the freedom and independence of the Palestinian people.”

“Samiha Al-Khalil: A Profile from the Archives”, on al-Jadaliyya Website: jadaliyya.com