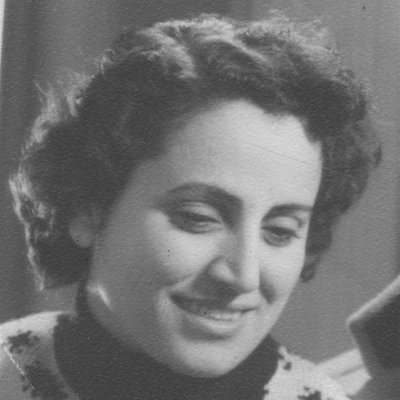 Birth of Samira Azzam in Acre

Azzam Teaches at the Greek Orthodox School in Acre

Britain and France Join the War

Azzam Meets Her Husband in Baghdad

Azzam and Her Husband Are Expelled from Baghdad, Accused by the Regime of Abd Al-Karim Qasim of Nasserist Sympathies; They Settle in Beirut

The General Union of Palestinian Women Is Formed in Jerusalem

Death of Samira Azzam in Ramtha

Azzam Is Posthumously Awarded the Jerusalem Medal for Culture, Art, and Literature by the PLO

Samira Azzam was born in Acre on 13 September 1927 to a Christian Orthodox family. Her father was Qaisar Azzam and her mother was Olympe Buri. She had one brother, Suhail, and three sisters, Siham, Suhaila, and Abla. Her husband was Adib Yusuf al-Hisn.

She worked as a teacher in the Greek Orthodox school in Acre from 1943 until 1945. She began to publish articles in the early 1940s in the newspaper Filastin under the pseudonym The Girl from the Coast.

Following the Nakba of 1948, she fled with her family to Lebanon. She moved to Iraq where she taught for two years at the Hilla Girls School and then returned to Lebanon. In Lebanon, she published her literary output in magazines like al-Adib and al-Adab.

In 1952 she worked in the Near East Radio station in Cyprus as a broadcaster and was in charge of the program called “Women’s Corner.” When the station moved to Beirut in 1954 she moved with it and was put in charge of a daily program called “When Morning Comes.” She continued to work for that station until it closed down following the tripartite aggression against Egypt in the autumn of 1956.

In 1957 she travelled to Baghdad where she met Adib Yusuf al-Hisn, a Palestinian man from Nazareth, and married him. She worked at both Baghdad and Kuwait Radio stations where she held the post of controller and producer of literary programs between 1957 and 1959. She was also a member of al-Sha‘b newspaper’s editorial board, which included the celebrated poet Badr Shakir al-Sayyab. In 1959 the regime of Abd al-Karim Qasim expelled her and her husband from Iraq, charging them with Nasserist sympathies, and she returned to Lebanon.

Back in Beirut she contracted with the Franklin Company for Publishing and Translation to translate a number of literary works from English to Arabic. From the early sixties onwards she was a regular contributor to the Beirut weekly Al-Hawadith, and her articles took on political and social issues in addition to literary themes.

In the early sixties, a number of secret Palestinian organizations were established. She played a prominent part in the formation of the nucleus of what became the Palestine Liberation Front in 1961. Azzam was the only woman among a group of male fighters who met to prepare for the creation of that front, also known as Tariq al-‘awda (the Road to return), ever since it issued its first secret proclamation in 1963. She continued her secret and relentless struggle and soon became responsible for the women’s section of the front, a role she retained until her death.

In terms of public political activity, she participated in the First Palestine National Congress in May 1964, from which the PLO emerged on 28 May. She was one of eight women who represented the women of Palestine at that historic congress. One year later she attended the conference held by the General Union of Palestinian Women in Jerusalem. A number of her female colleagues in the front also took part.

Azzam was the recipient of a number of prizes and awards. In 1990 the PLO posthumously awarded her the Jerusalem Medal for Culture, Arts and Literature. She had an extensive network of friendships and interviews with some of the Arab world’s most prominent writers and critics.

Among Palestinian women, Samira Azzam was a pioneer in the field of journalism and broadcasting and in terms of underground nationalist activity. She was also active in the field of translation. She also produced five short story collections as well as literary and critical studies. The Egyptian critic Raja al-Naqqash called her the “princess of the Arabic short story.” In his obituary of her, Ghassan Kanafani addressed her as “My teacher and instructor.” As regards her literary output, Kanafani stated: “One cannot describe her output as feminist. Rather, one might call it a ‘literature of exile’ because it revolves around a national cause more extensive from the human point of view than a mere reflection of women’s psychological or sentimental reality.”

The June 1967 war came as a major psychological shock to her. While travelling by car with some friends to Amman on 8 August to interview the refugees, she suffered a fatal heart attack in the border town of Ramtha. Her body was taken to Beirut where she was buried at the Protestant cemetery in Ras al-Nab‘.

[The Hour and the Human Being]

[A translation of Ray B. West, The Short Story in America]

[A translation of Danforth Ross, The American Short Story]