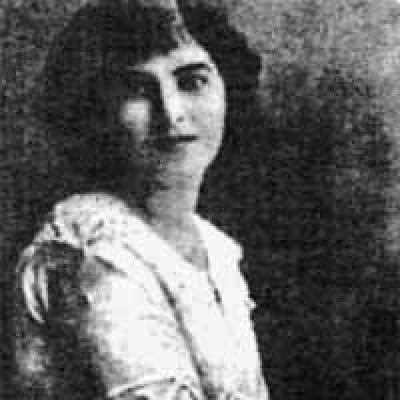 May (née Marie) Ziadeh was born on 11 February 1886 in Nazareth to a Lebanese father, a schoolteacher known as al-muʿallim (master) who was eventually appointed principal of the Terra Santa School in Nazareth, and a Palestinian mother named Nuzha Muʿammar. She had a paternal uncle named Hanna Ziadeh and a maternal uncle named Boulos Muʿammar. She had a brother, Elias, who died in 1891 at the age of two, a loss that left her deeply scarred for many years.

Ziadeh attended the Sisters of St. Joseph in Nazareth, where she completed her primary education and learned music, French, and Italian. In the summer of 1899, the thirteen-year-old Ziadeh went to Lebanon with her parents to meet her father's extended family, and she decided to continue her studies at the Collège des Soeurs de la Visitation in Aintoura in the Kesrouan province. At that school, she stood out academically among her classmates and her literary talent blossomed, especially her gift for writing poetry. It was there that she wrote her first poems after reading the poetry of the French Romantics like Lamartine and Alfred de Musset. She experienced depression and became an introvert. She also assumed the pen name Aida and started to keep a diary in French.

After graduating from Aintoura, Ziadeh spent a final year studying at the Maison des filles de la Charité in Beirut. She returned to Nazareth again in early 1905. In the middle of 1907, her father decided to leave Nazareth and move to Cairo. This move had a major impact on the development of her personality; Cairo provided the opportunity for her brilliance to reveal itself. It also resulted in her aligning with the mission of the pioneers of the nahda, or Arab cultural renaissance of the late nineteenth and early twentieth centuries, which called for liberation from religious, social, literary, and political ignorance and stagnation.

In Cairo, Ziadeh worked as a French teacher in a few small schools and started giving private lessons in French to the three daughters of the wealthy Egyptian Idris Ragheb. Ragheb had bought the publishing concession of the newspaper al-Mahrousa [the Safeguarded One] and its printing press from its owner Aziz Zand in 1904, and he transferred it to his friend Elias Ziadeh in late 1908. Beginning in January 1909, the masthead of al-Mahrousa identified Elias Ziadeh as the newspaper owner and editor-in-chief. This allowed his daughter to begin her career in journalism and embark on a literary life. By 1911, she had already published a collection of poetry in French entitled Fleurs de Rêve [Dreamy Flowers], under the pseudonym Isis Copia. In the meanwhile, she switched from writing in French to Arabic to be a part of the modernizing nahda spirit, and she started using the Arabic name May instead of her given name Marie.

May Ziadeh read copiously, and she tried to emulate the ideals she read. Early in her life, she was influenced by essayists such as Ahmed Faris al-Shidyaq, Adib Ishaq, Amin al-Rihani, and Malak Hifni Nassef. She was also deeply influenced by the style of Gibran Khalil Gibran, for whom she held a great love in her heart, and for many years they wrote each other affectionate letters.

Ziadeh launched herself as a public intellectual in Egypt in 1912, where she played a part in elevating the art of the essay aimed at raising awareness among young people. She did this by publishing several articles about social, literary, nationalist, and existential matters as well as literary criticism. Her articles appeared in al-Mahrousa, al-Zuhour, and al-Hilal.

At the same time, Ziadeh started learning Latin, English, and German with private tutors, and she also enrolled in the Greek Girls’ School to study Greek language and painting; later she taught herself Spanish. During World War I, she enrolled in the Egyptian University (now Cairo University) for four years to study the history of philosophy and ethics, the history of Arabic literature, and Islamic history. Between 1918 and 1934, she made friendships with some Spanish, Italian, French, English, and German orientalists, whom she met in Cairo when they went there to teach at the university or to do research at the invitation of one of the academic institutes there. She also got to know some of them through correspondence.

Ziadeh took great interest in the empowerment of women. She lectured on the subject of women and culture; expressed her views on the curricula used to teach in the education system; and established connections with women’s associations in Cairo, Damascus, and Beirut. She also became famous as a formidable public speaker. The talks she gave in Egypt, Syria, and Lebanon at the invitation of charitable societies or literary forums attracted great interest. She also gave lectures at Cairo University, the American University in Cairo, the American University in Beirut, and a few clubs.

In 1913, Ziadeh founded her Tuesday salon, which remained active for nearly twenty years. The patrons of the salon included the major figures of the intellectual, literary, and scholarly world; attendees of note included Shibli Shumayyil, Khalil Mutran, Saykh Mustafa Abdel Raziq, Mustafa Sadiq al-Rafie, Ahmad Lutfi al-Sayyid, Abbas Mahmoud al-Aqqad, Salama Moussa, Taha Hussein, Yacoub Sarrouf, Ahmed Shawky, and Hafez Ibrahim. The salon was also occasionally attended by Huda Sha‘rawi, the pioneer of the women’s empowerment movement in Egypt. Taha Hussein described her salon: “May’s salon was a democratic space, that is, it was open to all—those who were not of a distinguished standing in Egyptian public life were not turned away. It was attended by men and women, Egyptians, Syrians, and Europeans of various origins. Those attending would talk about everything, in various languages, particularly in Arabic, French, and English. They would sometimes also listen to a poem being recited, an article being read out, a musical composition being performed, or a song that pulled at one’s heartstrings.”

In the first half of the 1920s, Ziadeh focused her activity on writing and publishing a number of books, the first of which was a biography and study of Malak Hifni Nassif, known widely by her pen name Bahithat al-badiya [the Bedouin Scholar], published by Dar al-Hilal in 1920. After its publication, she was appointed a corresponding member of al-Rabita al-Qalamiya, or the Pen Bond Association in New York, for which the writer Mikhail Naimy was an advisor. She translated the novel Deutsches Liebe or German Love by F. Max Muller from German into Arabic and titled it Ibtisamat wa dumuʿ [Smiles and Tears], which was published in Cairo in 1921.

After her father's death on 24 October 1929, al-Mahrousa became a weekly instead of a daily publication; the masthead listed May Ziadeh as owner and editor-in-chief. Ziadeh’s journalistic and literary activities were not limited to al-Mahrousa, but also included the weekly newspaper al-Siyasa and the daily al-Ahram.

In 1932, Ziadeh traveled to England to take courses at the University of London that were offered in the summer. In 1933, she also spent a few months in Italy to acquire a deeper knowledge of Italian literature and art history. It was in 1935 that her ordeal began. Overcome by grief following the death of her father in 1929, followed by her mother, and then by Gibran Khalil Gibran three years later, Ziadeh was seized by a crippling despair and began smoking excessively; she indulged in spirituality and even claimed to communicate with spirits. By the end of that year, she was diagnosed with a nervous disorder.

After her condition worsened, her paternal cousin Joseph Ziadeh traveled to Egypt in March 1936 and took her to Lebanon where, on 16 May, he had her admitted to the sanatorium for nervous and mental illnesses to be treated for depression and mental disturbance. There she went on a hunger strike, accusing her cousin and her family of plotting against her. After her mental health improved, she was transferred first to Dr. Nicolas Rbeiz’s hospital on 23 March 1937 and then to the psychiatric ward of the American University of Beirut on 22 January 1938; she was there for three weeks.

A widespread campaign to protest her forced confinement and the defamation caused to her by the accusation of insanity was launched by some writers, including Abdallah Mukhles of the Haifa newspaper al-Karmel and Fouad Hbeish of the Beirut newspaper al-Makshouf. Amin al-Rihani also played a major role in the campaign. On 28 January 1938, the Lebanese Ministry of Health decided to appoint a committee of three doctors to examine her. This committee ruled that she still needed medical attention, but that she could leave the hospital to live in her own home, which she did on 14 February 1938.

However, just three days later, she was served with notice of a lawsuit filed before Beirut’s Court of First Instance by her other paternal cousin, Joseph Ziadeh, to declare her a legally incompetent person. He simultaneously filed a similar lawsuit against her in Cairo before the Probate Court on 14 April 1938.

Once more, with al-Rihani at the fore, May Ziadeh’s friends, including Prince Mukhtar al-Jazairi, the lawyer Habib Abu Shahla, Dr. Mansour Fahmy, and political leader Fares al-Khoury joined forces to organize a campaign to rescind the ruling of mental incompetence. Their efforts were successful. On 1 June 1938 Beirut’s Court of First Instance dismissed the lawsuit of mental incompetence and finally declared her free of the stigma of insanity.

In late July 1938, Ziadeh moved to al-Frikeh, a summer resort town in the Kesrouan region of Mount Lebanon, where she rented a small house that was a short walk from Amin al-Rihani’s house. She lived there until late November 1938 and hosted delegations from literary and cultural forums, famous figures from the literary and cultural world, and prominent feminist personalities.

On 11 January 1939, Ziadeh moved to Cairo, and on 19 February 1939 the Probate Council annulled the forced guardianship over her. However, in the summer of 1940, she was devastated once again by the death of her friend al-Rihani. She developed anemia and began to display signs of withdrawing from the world. She gave her last public lecture on 20 January 1941 at the American University of Cairo titled “Live Dangerously” to a packed audience of writers, professors, and students.

On 19 October 1941, she fell ill and was rushed to Maadi Hospital in Cairo, where she died at the age of fifty-five. Huda Sha‘rawi organized her funeral procession the following afternoon from Maadi Hospital to the Maronite Church in the Shubra neighborhood, and from there to the Maronite burial grounds in Old Cairo. A number of prominent Egyptian writers and newspaper editors walked in the procession bearing her coffin. On her gravestone the following tribute was etched: Here lies the genius of the East, the chief of Arab women writers, the ultimate role model for literary and social refinement, the dear departed May Ziadeh.

ِAfter her death, she was celebrated by many writers and journalists. The Cairo newspaper al-Muqattam ran an obituary titled “Arabism Grieves for the Loss of May.” On 4 December 1941, on the occasion of the fortieth day observance of her death, Sha‘rawi organized an enormous memorial service at the headquarters of the Egyptian Feminist Union. Members of the organizing committee for the ceremony included the Minister for Public Endowments Sheikh Mustafa Abdel Razek, Ahmed Lutfi Al-Sayed, Taha Hussein, and the editor-in-chief of al-Ahram.

May Ziadeh was one of the most famous pioneers of the feminist awakening in the Arab East and an eminent writer, orator, and overall woman of letters. She was also a well-known photographer and musician and played the piano and oud proficiently. All those who knew her and attended her salon unanimously agreed that she was bright, sharply intelligent, well-read, and incredibly attractive and that she captivated whoever she sat with. She earned the sobriquet al-nabigha May (genius May) and faridat al-asr (the matchless jewel of her age).

[Musings of a Young Lady: Collection of articles]

[Words and Gestures: Collection of articles]

[Rays of Darkness, Rays of Light: Collection of articles]

[Between Ebb and Flow]