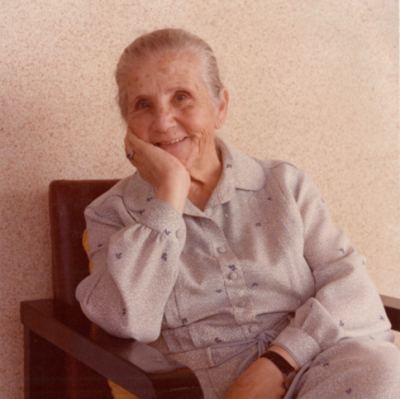 The Arab Congress Meets in Paris

Khalidi Participates in One of the Earliest Women's Society, the Young Arab Women's Awakening

Appointment of the King-Crane Commission

A feminist, activist, writer and translator of classic literary works into Arabic.

Anbara Salam was born in Beirut on 4 August 1897. Her father, Salim Ali Salam (Abu Ali), was a Beirut notable. Her mother, Kulthum al-Barbir, came from a family of religious scholars. She had seven brothers and two sisters, many of whom would play prominent political and social roles.  She was married to Ahmad Samih al-Khalidi and mother to Usama, Randa, Tarif, and Karma, who died in childhood.

Anbara received her elementary education in a traditional kuttab and then at various other schools, the last of which was the Maqasid School for Girls. The school was headed by the well-known educator Julia Tuma Dimashqiyya, who had a profound influence on Anbara’s thought and introduced her to Arab and foreign literatures as well as feminist issues. During World War I she was tutored at home in Musseitbeh Quarter, Beirut, in the Arabic language and linguistics by the celebrated Arabist and lexicographer Shaykh Abdullah al-Bustani.

Encouraged by her father to engage in social activities, to pursue her education, and to express her ideas freely, Anbara wrote her first editorial at the age of fifteen. This appeared in the newspaper al-Mufid, edited by Abd al-Ghani al-Uraysi, to whom she was later engaged. (He was one of several nationalist figures publicly hanged in public squares in Damascus and Beirut in 1916 on the order of Jemal Pasha.) In these early editorials, Anbara emphasized the essential role of women in the nation’s renaissance through education.

When the First Arab Congress was held in Paris in 1913, Anbara and two of her female friends sent a telegram of welcome to the congress, and it was the first message to be read out. Shortly before the outbreak of World War I, Anbara and some of her female friends established a society called The Young Arab Woman’s Awakening, which was one of the very earliest women’s societies in the Arab world. The purpose was to encourage the education of Arab girls, but the war interrupted their activity.

During the war, Anbara and a group of women friends worked to equip and manage schools, shelters, and workshops for war orphans. In 1917, Anbara helped to establish a social cultural club called The Young Muslim Women’s Club and then became its president. The club attracted many distinguished figures and scholars who delivered lectures on diverse scientific and literary subjects.

In 1919, on the aftermath of the Great War, Anbara was a member of a women’s delegation that met the US King-Crane Commission and presented to it a memorandum similar to memoranda submitted by other nationalists. In 1924 she took part in setting up the Society for Women’s Renaissance in Beirut, which aimed to encourage local industries.

In 1925, Anbara travelled to England to join her father who was there for private business and three of her siblings; she stayed for two years. This visit left an indelible impression on her mind, particularly her encounter with English women and their struggle for emancipation and for joining the labor force.

In 1927, Anbara was invited by the Sunday School Club of the American University of Beirut to speak about her trip to England. The lecture was entitled “An Oriental Woman in England.” Stepping up to the podium, she removed her veil, becoming the first Muslim woman in the Greater Syria region to remove the veil in a public place. This act was met by a wave of violent protests in the conservative Beirut street.

In 1929 Anbara married the Palestinian educator Ahmad Samih al-Khalidi and moved with him to Jerusalem; they remained there until the year of the Nakba in 1948. She took part in the political and feminist activities in Palestine and delivered many radio talks on Palestine Radio about famous Arab and western women in history. She also worked closely with her husband as he pursued his literary, history, and educational research and joined him in the service of the Palestine cause and in explaining it to the British and international commissions of inquiry that visited Palestine. She performed the same service with the many foreign journalists and writers who visited her home in Jerusalem. She wrote many articles that were published in Lebanese and Arab journals. Some articles remain in manuscript form.

Anbara Salam Khalidi died in Beirut in 1986 and was buried there.

These works were translated from the following sources:

[A Tour of Memories between Lebanon and Palestine]