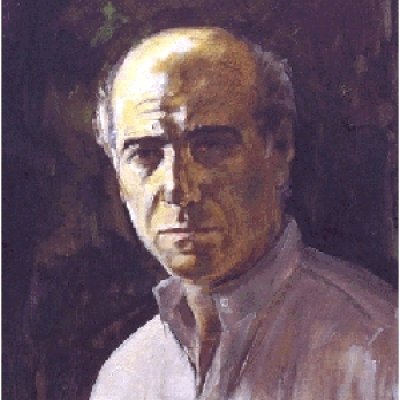 Ismail Shammut was born in the town of Lydda on 2 March 1930. His father, Abd al-Qadir Shammut, was a fruit and vegetable merchant. His mother was Aisha al-Hajj Yasin. He had seven siblings: Ibrahim, Kawthar, Jamil, Muyassar, Inam, Jamal, and Tawfiq. His wife was the artist Tamam Arif al-Akhal, who was born in Jaffa in 1935. His children are Yazid, Bashar, and Bilal.

In 1936 he started elementary school, and his artistic talent was spotted at an early age. His teacher, Dawud Zalatimu, took him in charge. Zalatimu served as an art teacher in Lydda from 1930 until 1948, and his drawings of historic events and nature decorated the school walls. Shammut was taught by Zalatimu to draw with pencil and ink, to paint with watercolors, and to sculpt in limestone.

After convincing his religious and conservative father that “art could be a profitable profession,” he started by decorating wedding dresses with flowers and birds and then opened his own shop, which was in fact his first studio. There he painted his first oils depicting natural scenery and portraiture before the Nakba of 1948.

Three days after the fall of Lydda and Ramla to the Zionist forces, on 13 July 1948, Shammut and his family (along with the inhabitants of the two towns) were forced to leave and go on foot to Ramallah and were not allowed to carry water. His young brother Tawfiq died of thirst before they arrived at the village of Nilin, near Ramallah. Shammut documented that march of death, exhaustion, and thirst in several paintings executed in the 1950s.  The family continued to move until it settled in the tents that eventually formed the Khan Yunis refugee camp.

Shammut sold pastry for one year and then volunteered to teach drawing at the refugee schools, which were set up in tents. This allowed him to resume his artistic career and to exhibit his paintings in a room in the Khan Yunis government school in 1950. That same year he joined the Fine Art Academy in Cairo and lived off his earnings, drawing movie posters.

Shammut held his first exhibition in 1953, having accumulated enough paintings for a large exhibition “but did not have enough courage” to hold it in Cairo. So he exhibited at the Employees Club in Gaza city jointly with his brother Jamil. At that exhibition Shammut presented some sixty paintings including his now famous Where to? and A Mouthful of Water. That exhibition was regarded as the first contemporary art exhibition in Palestine’s history by a Palestinian artist on Palestinian soil, as judged by its size, the number of works exhibited, the way it was opened, and the mass attendance.

In 1954 he held an exhibition in Cairo called The Palestinian Refugee jointly with an art student at the Fine Arts Academy, Tamam al-Akhal, and the Palestinian artist Nuhad Sabasi. This exhibition was under the auspices of Gamal Abdel Nasser, at that time Egypt’s prime minister, and was attended by Palestinian leaders. His earnings from that exhibition encouraged him to travel to Italy where he soon received a scholarship to study at Rome’s Accademia di Belle Arti, and he remained there for two years (1954–56).

Following his graduation he moved to live and work in Beirut with his brother Jamil at the UN Relief and Works Agency (UNRWA). The brothers set up an office for commercial art and book design; the latter included a pamphlet for the Lebanese army entitled “Human Civic Education.”

In 1959 he married fellow artist Tamam al-Akhal and thereafter they worked closely together, artistically and professionally. They trained art teachers in Beirut, Jerusalem, the West Bank, and Gaza Strip and held joint exhibitions in those localities.

Shammut and al-Akhal followed closely the creation of the PLO at the First Palestine National Congress in Jerusalem in 1964. In 1965 he set up the Artistic Culture Section of the PLO Department of Information and National Guidance (later known as Department of Information and Culture) and directed its activities until 1984. When the offices of the PLO in Jerusalem closed, the couple returned to Beirut in 1966 and resumed work with the PLO there, in addition to their personal work as artists. Shammut completed an innumerable number of posters and literary, political, and traditional projects and with al-Akhal organized tens of political and personal exhibitions in cities around the world, including Gaza, Cairo, Jerusalem, Ramallah, Nablus, Amman, Washington (plus twelve other US cities), Tripoli, Damascus, Kuwait, London, Belgrade, Sofia, Beijing, and Vienna, in addition to murals called The Path in Amman, Ankara, Istanbul, Doha, Sharjah, Dubai, Cairo, Damascus, Aleppo, and Beirut. Among his most notable achievements is the hall called Dar al-Karama in Beirut where seasonal exhibitions by young artists from Palestinian refugee camps were displayed, as were other Arab and international solidarity exhibitions.

Following the Israeli invasion of Lebanon in 1982, the departure of the Palestinian resistance and its leaders, and the closing of the PLO offices, Shammut (who had a heart condition that had worsened) was forced to move with his family to Kuwait in 1983, where they lived through the occupation of Kuwait in 1991 and the Gulf War. After the liberation of Kuwait, the family was again forced to move in 1992, this time to Germany. In 1994, Shammut and al-Akhal finally settled in Amman, Jordan.

Shammut is generally regarded as a pioneer of contemporary Palestinian art. He was a committed artist whose style was realistic with some symbolist elements. The Palestinian cause dominated his art, some of which was widely distributed in camps and houses and in solidarity with Palestine campaigns in the Arab countries and beyond. Some of his works can be regarded as iconic for the Palestinian people.

Shammut never ceased to depict the Palestinian exodus from Palestine in paintings that carried titles and meanings very much present in people’s minds and in his own experience; an example is  the painting he titled Where to? (1953). His paintings were inspired by camp life (such as Memories and Fire, 1956; We Shall Return, 1954; and Bride and Groom at the Border, 1962) and called for reflection on the meaning of a nation in waiting.

The PLO awarded him the Revolutionary Shield for Arts and Literature, the Jerusalem Medal for Culture, Arts and Literature, and The Palestine Prize for the Arts. The Arab Thought Forum awarded him The Creative Prize for Arab Painting. An annual prize in his name is awarded for excellent Palestinian painting. His works have been acquired by several Arab and international museums.

His heart condition forced him to undergo three critical operations, the third of which was performed in Leipzig, Germany; he died on 3 July 2006 and was buried in Amman.

In addition to his paintings, he wrote histories of Palestinian painting and crafts and produced a number of films, which were influenced by his artistic experiences. These include a film called Memories and Fire (1973), which won the Short Documentary Film Prize at the Leipzig Festival; Urgent Appeal (1973); and On the Road to Palestine (1974). Noura al-Sharif produced a short film called Isma‘il, which dealt with a part of his life during his first period as a refugee in the Khan Yunis camp. A website devoted to his work is available at http://www.ismail-shammout.com

[Palestine in Pictures: An Abridged History]

[A History and a Civilization]

[The Tradition of Palestinian Popular Art]

A City-Wide Massacre Culminating in the Death March