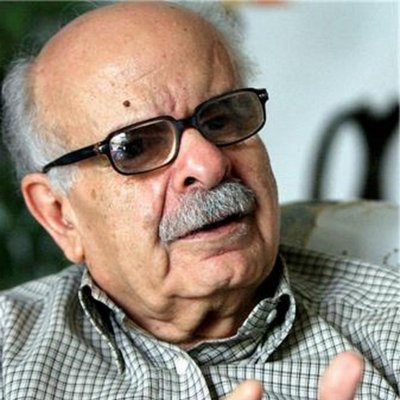 Anis Sayigh was born on 3 November 1931 in Tiberias to a Syrian father who had moved to Palestine. His mother was Afifa al-Batruni. He had one sister, Mary, and five brothers: Yusuf, Fuad, Fayiz, Tawfiq, and Munir. His wife is Hilda Jalil Shaban.

Sayigh received his elementary education in Tiberias and then moved to Zion College (Bishop Gobat’s School) in Jerusalem where he studied for one year (1946–47). Following the closure of that school on 30 November 1947, Sayigh enrolled at Gerard Institute in Saida where he completed his secondary education.

In April 1948 his family fled to Lebanon and in October 1949 Sayigh enrolled at the American University of Beirut; he graduated with a BA in political science in June 1953.

While still an undergraduate, Sayigh began to write for a number of Beirut newspapers and magazines, including Al-Hayat, on various historical topics. He would go with a fellow student to the newspaper offices and wait for the editor, Kamel Muruwwa, to leave and then leave their articles on his desk. Sayigh was afraid that he would be dismissed for writing on topics far too complex for a person his age. But he was pleasantly surprised to learn that Muruwwa liked his articles and added the title Dr. to his name.

At an early age he fell under the influence of the ideology of the Syrian Social Nationalist Party (known also as PPS, Parti populaire syrien), but he did not formally join the party. After the mid-fifties he espoused Arab nationalism.

Following his graduation, he signed two official agreements with two press establishments, al-Nahar newspaper and al-Usbu‘ al-‘Arabi magazine. He continued to write without remuneration for some other newspapers and magazines, including al-Hayat and al-Thaqafa al-‘Arabiyya journal.

In 1959 he enrolled at Cambridge University where, in 1964, he graduated with a Ph.D. in Middle East Studies. He was also a lecturer at Cambridge’s Faculty of Oriental Studies.

Upon his return to Beirut in 1964, he was appointed editor of the English–Arabic dictionary that the Franklin company was planning to issue in Beirut. However, he left this job in 1966 when he refused to pledge that he would take no part in any political or cultural activity involving a controversial political issue.

Delegated by PLO Chairman Ahmad al-Shuqairi, he acted as director of the PLO Research Center between 1966 and 1976, succeeding his brother Fayiz. Under his leadership the center grew greatly. By the time he left the center, it had published more than 300 items (some multilingual and others multivolume). The center also issued a monthly called Shu’un Filastiniyya and a twice-daily bulletin called “Israel Radio Monitor.”

During the academic year 1968–69, he was dean of the Institute for Arab Research and Studies, which was affiliated to the Arab League in Cairo.

While director of the PLO Research Center, he sought to turn the center into an independent, professional, and academic institution, which led him to clash at certain times with PLO Chairman Yasir Arafat.

On 19 July 1972, Sayigh was the victim of a letter bomb sent by the Israeli Mossad. Attempting to open the package, it blew up in his face, wounding his hand, shoulder, and face. After lengthy treatment he recovered part of his vision and a little hearing in one ear, though he continued to suffer from tinnitus for the rest of his life.

Sayigh was appointed director of the Palestine Department at the League of Arab states in Cairo in 1977–78. He returned to Beirut in 1978 to take over editorship of the monthly al-Mustaqbal al-‘Arabi published by the Center for Arab Unity Studies where he remained for one year. He then took over editing the monthly Qadaya ‘Arabiyya, published in Beirut by the Arab Institute for Research and Publication, where he remained for a year and a half. Between 1979 and 1980 he lectured at the postgraduate level in the History Faculty of the Lebanese University.

The year 1993 was a low point in his life. He was physically exhausted and his eyesight was failing. He decided to “retire but not to remain inactive.” Thus, he continued to oversee the forum called the  Palestinian Cultural Encounter, which he had founded in the summer of 1992. He also contracted with al-Safir newspaper in 1995 to write a weekly column, which two years later became a monthly column. He continued to write for that newspaper until 1999.

Sayigh supervised dozens of MA theses and Ph.D. dissertations and was awarded a number of prizes and medals, including the Syrian Merit Medal. In addition to his outstanding academic, journalistic, and research activities, Sayigh was a member of the Palestine National Council and vice-president and spokesman of the Palestinian National Congress that met in Damascus on January 2008 to call for Palestinian unity and to reject the results of the November 2007 Annapolis Conference.

In his personal life he was known for his acerbic wit, his secularism, and his time consciousness and punctuality. In his professional life he was distinguished by his exacting academic standards and both the quality and quantity of his works.

[The Hashemites and the Question of Palestine]

[Half a Century of Delusions]