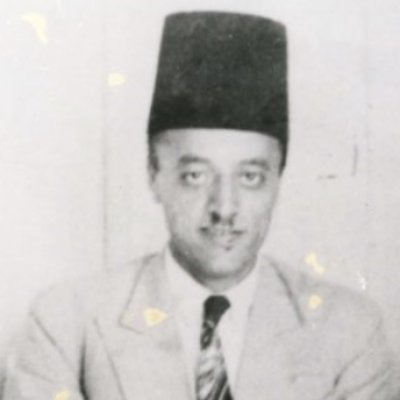 Ahmad al-Shuqairi was born in the town of Tibnin, in southern Lebanon, where his father, Shaykh As‘ad al-Shuqairi, was exiled during the Ottoman period. He had two half-brothers, Abd al-Afu and Anwar, and three sisters. Shuqairi was married to Nasiba al-Sa‘di; they had six children.

At an early age he moved to Tulkarm to live with his mother (who was Turkish by origin) and her second husband, Salim, who worked in the Postal Department. When his stepfather died, he experienced poverty. He entered elementary school in Tulkarm. Following his mother’s death, his cousin, Muhammad Ali al-Shuqairi, who worked as a doctor in Haifa, arranged for him to travel to Acre in the summer of 1916 to live with his father, who was then Mufti of the Fourth Ottoman Army and an intimate of its commander, Jemal Pasha.

Ahmad al-Shuqairi’s life may be divided into five periods.

Shuqairi’s elementary and middle education was completed in Acre. All subjects were taught in Turkish, but he was an avid student of Arabic and the Qur’an from a young age. At the Pasha Mosque in Acre he attended the teaching circle of Shaykh Abdullah al-Jazzar, the city’s mufti, to whom he owes his knowledge of Arabic and religion.

Shuqairi completed his secondary school education in Jerusalem. He spent three years (1924–26) at Zion College (Bishop Gobat’s School); the language of instruction was English. He graduated in July 1926, and thereafter attended the American University of Beirut but was unable to graduate because he was expelled from the university and ordered to leave the country by the French Mandate authorities on 13 May 1927. He had taken part in a mass demonstration in Beirut to commemorate the hanging of Palestinian, Syrian, and Lebanese nationalists in 1916 on the order of Jemal Pasha.

Shuqairi returned to Acre and began to write nationalist articles for a weekly published in that city called Al-zumar.

In 1927 he enrolled in the law school established by the British Mandate, known as the Jerusalem Law Classes, and graduated in 1933. While a third year student he began to work at the law firm of the prominent Jerusalem lawyer Mughannam Elias Mughannam as an apprentice clerk; at the same time he worked as a reporter on the weekly Mir’at al-sharq. In 1928 Shuqairi participated in the conference of Muslim youth associations held in Jaffa as part of the Jerusalem delegation.

Following the al-Buraq revolt of August 1929, he was arrested along with other young men and taken to the village of al-Zib near Acre where he spent some time under house arrest in the house of the mayor of Acre, Abdul Fattah al-Sa‘di, who would later become his father-in-law.

When he was released, he returned to Jerusalem to complete his studies at the Law Classes and, while at the Mughannam law firm, he helped to prepare a file requested of that firm by the national leadership. This file was eventually submitted to the British Commission of Inquiry set up to investigate the al-Buraq revolt, commonly known as the Shaw Commission. He also took part in preparing the case for the defense submitted by the Mughannam law firm to defend three militants who participated in that revolt: Fouad Hijazi, Atta al-Zeer, and Muhammad Jamjoum. All three were later sentenced to death by a British court. While in Jerusalem Shuqairi became acquainted with a number of nationalist leaders and lawyers including Awni Abd al-Hadi, Subhi al-Khadra, and Muhammad Izzat Darwaza.

After he graduated from the Law Classes in 1933, Shuqairi began to practice law in Acre. He devoted a lot of time to land dispute cases and to defending the civil rights of the peasants. He took part in the funeral, held in Haifa, of Shaykh Izzeddin al-Qassam, who was killed by British security forces on 20 November 1935, and whom he had met. Shuqairi and a lawyer colleague, Muin al-Madi, volunteered to defend the followers of al-Qassam, who were tried by the British authorities in Jenin in December 1935.

When the General Strike broke out signaling the start of the Arab Revolt, Shuqairi helped to form the National Committee in Acre in April 1936, so the British ordered his forcible detention that year, first in the village of Samakh and then in al-Himma on the Jordan-Syria frontier. When the strike ended in October 1936 he returned to his law office in Acre.

On 8 September 1937, he took part in the Arab National Congress held in the Syrian town of Bludan to protest the partition plan proposed by the British Royal Commission (the Peel Commission) two months earlier. Shuqairi was elected a member of the Information and Guidance Committee formed at the Bludan conference.

When the armed revolt against Britain was reignited in September 1937, in the wake of the Peel Commission, Shuqairi attempted to go secretly to Cairo but was arrested and taken to the Mazra‘a detention camp near Acre. Following his release, he slipped away to Damascus by way of al-Himma and then moved to Beirut where he met with foreign journalists to explain the history of the Palestine problem. He also wrote a number of articles for the Beirut daily Al-Nahar, published by Jubran Tuwayni.

When World War II broke out, Shuqairi moved to Cairo for a few months and then returned to Acre in February 1940, following the death of his father.

In 1944 he joined Musa Alami and took part in his actions. He was delegated by Alami to travel to Washington in 1945 and establish an Arab Office to defend the Palestinian cause. He returned to Palestine in late November 1945, and in 1946 Alami appointed him head of the Arab Office in Jerusalem. He remained in that post until the end of 1947.

While at the Arab Office, Shuqairi submitted a statement before the Anglo-American Committee of Inquiry in March 1946 and in June of that year he was a member of a delegation to a meeting of the Arab League held in Bludan. That delegation was headed by Jamal al-Husseini, who had recently returned from exile. Musa Alami, brother-in-law of Husseini, was also a member of that delegation. Also in June, he accompanied Husseini and Alami on trips to Saudi Arabia, Iraq, and Syria.

When the Nakba took place and his hometown of Acre fell to the Zionist forces, Shuqairi sought refuge in Lebanon.

On 2 March 1951, Shuqairi was appointed assistant secretary general of the Arab League, under Abd al-Rahman Azzam and his successor, Abd al-Khaliq Hassuna, but he remained a member of the Syrian delegation during the UN sessions. During these years his name came to be widely known for his strong defense of Palestinian rights at the UN. In February 1955 he was part of the Syrian delegation to the Bandung Non-Aligned Conference. In the autumn of 1957, he was appointed minister of state for UN affairs in the government of Saudi Arabia and its permanent envoy to the UN. He remained in that post until 1962, acquiring more and more visibility. In the summer of 1961 he visited the Soviet Union and met the secretary general of the communist party, Nikita Khrushchev, at Sochi, a resort on the Black Sea. He gave up his job with the Saudi government following the deterioration of relations between Saudi Arabia and President Nasser, and he returned to work for Palestine, advocating a revival in the struggle for the Palestine cause.

Shuqairi headed a unified Palestinian delegation to the UN General Assembly on the occasion of its annual session in Autumn 1963.

The first Arab Summit conference, held in Cairo in January 1964, authorized Shuqairi to contact representatives of the Palestinian people and its institutions as well as Arab government officials in order to prepare for the convening of the First Palestine National Congress from which a Palestine “entity” would be born.

The Palestine National Charter, drafted by Shuqairi and approved by the congress in early June 1964, included the following statement:

Article 14: The liberation of Palestine, from an Arab viewpoint, is a national duty. Its responsibilities fall upon the entire Arab nation, governments and peoples, the Palestinian peoples being in the forefront. For this purpose, the Arab nation must mobilize its military, spiritual and material potentialities; specifically, it must give to the Palestinian Arab people all possible support and backing and place at its disposal all opportunities and means to enable them to perform their role in liberating their homeland.

Article 17: The partitioning of Palestine, which took place in 1947, and the establishment of Israel are illegal and null and void, regardless of the loss of time, because they were contrary to the will of the Palestinian people and its natural right to its homeland, and were in violation of the basic principles embodied in the Charter of the United Nations, foremost among which is the right to self-determination.

After the defeat of the regular Arab armies in June 1967, guerrilla activity became the foremost action for the Palestinian people and the most expressive of their will. Soon, a struggle erupted between the guerrilla groups and Shuqairi, who had been facing difficulties in his dealings with a number of Arab regimes. In December 1967, he resigned as chairman of the Executive Committee of the PLO in the wake of serious differences between him and some members of that committee, and he left for Cairo.

Shuqairi lived in Cairo from 1967 until 1978. In 1978 he left for Tunis following the signing of the Egypt-Israel peace treaty. After living in Tunis for some time, he moved to Lebanon and lived in a house he built overlooking the Mediterranean in the village of Kaifun.

During this period Shuqairi devoted himself to writing, mainly his memoirs. These memoirs, though overstated in certain places, are nevertheless an important (perhaps the most important) record of the evolution of the Palestine question and the various approaches adopted by Arab and foreign governments, told from the perspective of a Palestinian leader during the sixth and seventh decade of the twentieth century.

Shuqairi died in Amman on 25 February 1980 and was buried, according to his will, in Abu Ubayda Cemetary in the Jordan Valley.

[From Jerusalem to Washington]

[Discussions and Secrets with Kings and Presidents]

[From the Summit to the Defeat with Kings and Presidents]

[On the Path to the Defeat with Kings and Presidents]

[The Great Defeat with Kings and Presidents]

[One Flag and Twenty Stars]

[Pages concerning the Arab Cause]

Basic Law of the Palestinian National Fund (in Arabic)

Bylaws of the Executive Committee of the PLO (in Arabic)