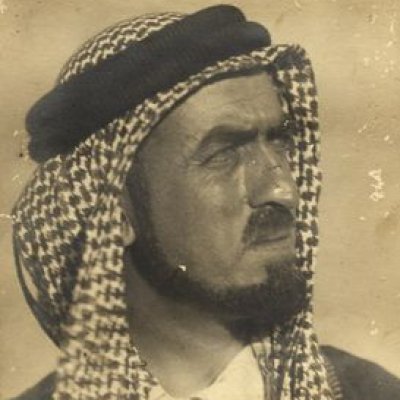 Subhi al-Khadra was born in Safad, His father was Sa‘id and his mother was Sa‘da al-Khadra. He and his wife, Anisa Salim, had four children: Faisal, Salma, Aida, and Buran.

Subhi al-Khadra completed his elementary education in the school attached to the Red Zahiri Mosque in Safad and then went on to study at the Salahiyya College in Jerusalem, finishing his secondary school education at the Maktab Sultani in Beirut.

He joined the Military Academy in Istanbul, graduating as an officer. In World War I he served in the Ottoman army on the Sinai and Suez fronts and was for a while a prisoner of the British forces. He then joined the Arab Revolt against Ottoman rule, which had begun in the Hijaz. Having joined the camp of Prince Faisal, he took part in several battles in southern Transjordan and was in the vanguard of the Arab forces that entered Damascus in October 1918. During the Prince Faisal era in Syria, he was appointed deputy to the director of general security and then director and aide to Faisal. He took part in the Battle of Maysalun against the invading French forces in July 1920, and the French authorities sentenced him to death.

Following the end of Faisal’s rule in Syria, he joined Prince Abdullah in Transjordan and later rejoined Faisal following the latter’s appointment as king of Iraq in 1921, serving with the Iraqi army in the Mosul area.

Subhi al-Khadra returned to Palestine in 1925 where, due to his military experience, he was brought into the British Police Force and was appointed deputy to the commander of the anti-smuggling unit. He used his post to smuggle arms to the rebels in Syria and quickly became the link between the leaders of the Syrian Revolt in the north and the nationalists of Transjordan and Palestine.

He left the Police Force in mid 1927 and returned to his hometown, Safad, where he was active in stirring nationalist sentiments and gained prominence as one of its nationalist figures.

In the wake of the Seventh Palestine National Congress held in Jerusalem in June 1928, Subhi al-Khadra was chosen as a member of the Arab Executive Committee. Then the committee chairman, Musa Kazim Pasha Husseini, asked him to manage the committee’s office in Jerusalem. Meanwhile, he enrolled in the Jerusalem Law Classes and graduated as a lawyer in 1932.

He participated in the Arab national conference held on 13 December 1931 in the house of Awni Abd al-Hadi in Jerusalem. He also was a signatory on 2 August 1932 of the official announcement that re-established the Independence Party and became one of the party’s most prominent leaders.

He was appointed director of the awqaf of Acre by Haj Amin al-Husseini and served in that position from 1932 to 1934 and as advocate-general of the awqaf in 1935.

Following the proclamation of the Great Palestinian Rebellion in April 1936, the British arrested Subhi al-Khadra, and he was interned first at the Sarafand camp near Lydda then in the Awja al-Hafir camp near the frontier with Egypt. He was released only when the strike ended in November of that year. During his detention he often made statements to urge people to continue the struggle.

He then returned to practicing law, but the British continued to pursue him; he was arrested again in 1937 and confined in the fortress of Acre.  Following his release he was arrested for the third time and confined to the prisons of Jerusalem, Atlit, and Acre. Following his release from prison, he was put under house arrest in 1940 in Jerusalem and forbidden to return to Safad.

He went back to practicing law and concentrated his efforts on preventing Arab land from passing into the hands of Zionist institutions. With this objective in mind, he, along with his colleagues Awni Abd al-Hadi and Rashid al-Haj Ibrahim, prepared a memorandum addressed to Arab kings and presidents entitled “Memorandum Regarding the Question of Land in Palestine.” The memorandum called for the establishment of an Arab fund to save lands in danger of being sold to Zionists.

In the autumn of 1947, Subhi al-Khadra was chosen to represent Palestine on the Military Committee of the Arab League, which was charged with supervising the fighting in Palestine. That committee entrusted him with the task of buying arms from Egypt and Libya and sending them to Palestine. He continued to do so until June 1948.

Following the Nakba, he sought refuge in Damascus where in October 1949 he was appointed director of the Institute of Palestinian Arab Refugees, which the Syrian government had set up early that year to oversee Palestinian refugee affairs in Syria. Shortly thereafter, he left his official post and returned to his law practice.

Subhi al-Khadra was an active and unyielding nationalist of wide culture, a high-minded man of character who was always among the first to take part in any nationalist endeavor or activity. At national conferences he would always repeat the phrase, “We are here to do much and talk little.” Another phrase of his also became famous: “Britain is the fountainhead of evil and the chief of all our woes.”

Palestine Police During the British Mandate